A woman who waved a Confederate flag and yelled ‘KKK belief’ at Black Lives Matter protesters in Missouri has apologized and claimed she did not understand the flag’s significance.

Kathy Jenkins was filmed telling protesters she would ‘teach my grandkids to hate you all’ during the rally in Branson last Sunday.

But she now insists her anger was aimed at two neighbors in a ‘personal vendetta’ and not at the protesters in general, claiming she was mocking people calling her racist and had ‘blacked out’.

Speaking to local news station KOLR10 yesterday she said she was ‘deeply sorry’ and would ‘never, ever, ever hold up another Confederate flag in my life’.

Jenkins says two women she knew were among the Black Lives Matter protesters and were calling her a ‘KKK racist’.

‘I said I would never be a racist. They just kept coming at me and coming at me, and I lost my temper,’ Jenkins said.

Asked about her ‘teach my grandkids to hate you all’ comment, she insisted it was aimed at the two women and said: ‘It had nothing to do with the people there for Black Lives Matter.’

Jenkins admitted she had said some ‘ugly, ugly things’ but said she was not identifying herself with KKK beliefs – claiming she was ‘mocking’ her critics.

In the video she is heard shouting ‘KKK belief’ in response to an unseen protester who tells her that ‘hating is not a way to live’.

Jenkins also claimed the Confederate emblem had been ‘given to me on the property’ and said ‘I don’t understand the whole Confederate flag thing’.

During the rally, Jenkins had held up the flag and shouted ‘suck on this’ towards the protesters.

Her voice breaking yesterday, she promised to ‘learn from this’ and said: ‘I am truly, deeply sorry for what I said. This isn’t who I am as a person’.

However, Black Lives Matter organizer Faith Pittser told KOLR10 that Jenkins ‘knew exactly what she was doing’, saying her claims of ignorance were ‘absurd’.

Jenkins spoke out yesterday three days after the video caused uproar on social media and drew criticism from Branson mayor Ed Akers, who said the city ‘does not condone any type of hate speech’.

Jenkins now insists her anger was aimed at two neighbors in a ‘personal vendetta’ and not at the protesters in general, claiming she was mocking people calling her racist

The clip was shared online by rapper Ice T on Monday, who wrote: ‘Racist of the Day…’

She gave her name at the time as Kathy Bennett, but identified herself as Kathy Griffin when she spoke to the local TV network yesterday.

The video drew the attention of rapper Ice T on Monday, who shared the footage with the caption ‘Racist of the Day’.

The protest had erupted outside the store Dixie Outfitters, which specializes in Confederate flags, clothing and other merchandise.

Confederate symbols have come under renewed scrutiny in recent weeks amid the worldwide anti-racism protests following the death of George Floyd on May 25.

Floyd died after being pinned down on the neck by a white cop for nearly nine minutes, unleashing an explosion of anger at racism and police brutality.

Virginia has ordered a statue of Robert E. Lee to come down in Richmond while other monuments have been torn down by protesters.

However, Donald Trump has rejected calls to rename 10 military bases which are named after Confederate generals. 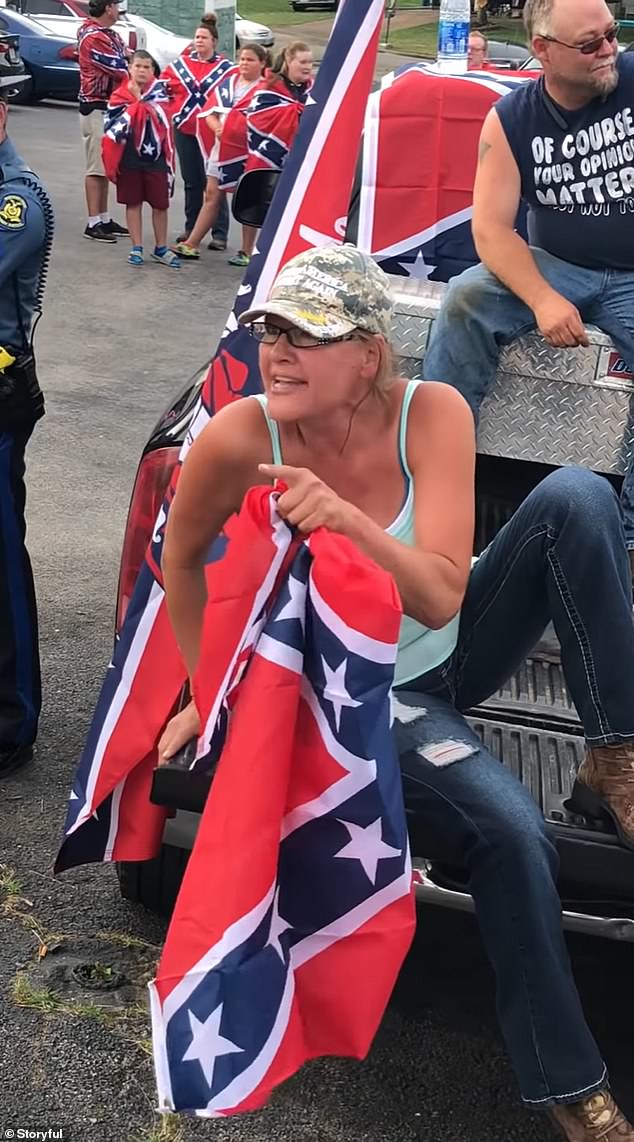