Congressman shares pain after sudden death of wife at 39

The congressman’s wife was just 39 years old when she passed away at the family’s Lexington property on Tuesday.

Authorities have not yet revealed a cause of death and it is not know whether the couple’s two young daughters, Eleanor and Mary Clay, were at home at the time.

The coroner’s office issued no comment on the cause of Carol’s death when contacted by DailyMail.com. However two sources briefed on the matter told the New York Times it’s believed she suffered a fatal brain aneurysm.

Barr, 49, who married Carol in 2008, spoke of his wife’s death in a statement on Wednesday, calling this a time of ‘tremendous grief and pain’.

‘We ask for prayers for our beautiful, dear and precious Carol, the greatest, most selfless and giving wife, mother, daughter, sister and friend anyone could ever have,’ Barr said in his Wednesday statement, released by his office.

‘We also ask for love and prayers for Carol’s greatest legacy — her loving and devoted daughters Eleanor and Mary Clay — through whom Carol’s extraordinary life, high character and irrepressible spirit will continue,’ he continued.

Carol Barr is seen above in a family photo with her two daughters, Eleanor and Mary Clay, and husband Andy. The 39-year-old died at her family home in Lexington, a statement issued by Barr’s chief of staff confirmed

Barr, who is a Republican, has served as the US representative for Kentucky’s 6th congressional district since 2013.

Carol grew up in Georgetown and went to the University of Kentucky where she majored in communications and information.

She was a healthcare representative for Pfizer, having previously worked as executive director for the Henry Clay Center for Statesmanship.

Carol was also a member of the University of Kentucky College of Information National Advisory Board.

Barr said Wednesday that his family’s faith has helped them immensely as they attempt to confront their loss.

‘In this moment of profound grief and heartbreak, we are so grateful for the gift and blessing of Carol’s life, for her strong faith in her Lord and Savior Jesus Christ, for the comfort of fond memories and her victory in heaven,’ he said in his statement, ‘and for all those who have surrounded Carol’s family, the girls and I with beautiful expressions of love, compassion and sympathy.’ 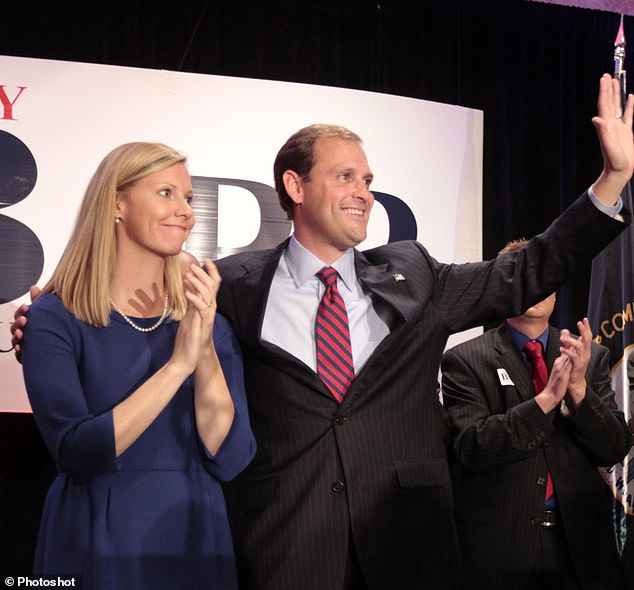 On Tuesday evening, a Fayette County coroner’s van was seen outside the family home.

US Senate majority leader Mitch McConnell said that Carol’s ‘warmth filled whatever room she entered and her contributions made Kentucky a better place for all of us.’ 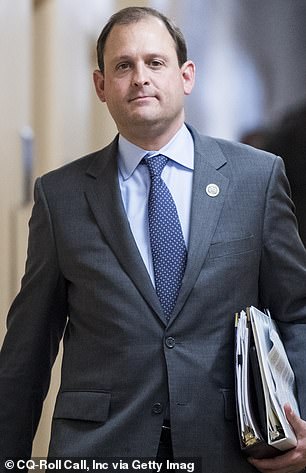 Barr, who is a Republican, has served as the US representative for Kentucky’s 6th congressional district since 2013

Jim Gray, former mayor of Lexington and current Secretary of Transportation, described Carol as ‘loving, caring and compassionate’, adding: ‘Her smile and spirit were irrepressible and her life represented devotion to family and friends and the broader community she embraced and touched each day.’

Governor of Kentucky Andy Beshear said he and his wife were ‘heartbroken for U.S. Rep. Andy Barr and his family tonight at the sad news of the unexpected passing of the congressman’s wife, Carol. We are praying for the Barr family’.

Congressman Hal Rogers, who serves as US Representative for Kentucky’s 5th District, said:  ‘Carol was always a joy to be around. She had a smile that lit up every room, radiating with the love she had for her family and our Commonwealth.

‘Unexpected tragedies of this measure are difficult to understand, but we pray for peace and strength for the entire Barr family’.

The Kentucky State Majority also offered their thoughts and prayers to Barr and his family, in light of the ‘unexpected and heartbreaking news’ of Carol’s death,

‘We hope the people of Kentucky join us in praying for Congressman Barr, his two young daughters, their family and loved ones as they navigate this incredibly difficult time.’

Kentucky Secretary of State Michael Adams shared on Twitter his memory of when Barr first told him about meeting Carol, whom he described as an ‘extraordinary woman’.

‘I remember the day years ago when my friend Andy Barr told me about the extraordinary woman he’d met, and how he thought she was the one,’ Adams wrote. ‘He was right on both. My heart breaks for Carol, Andy and their beautiful family.’ 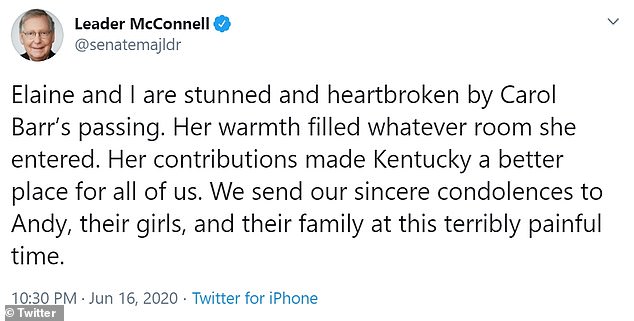 US Senator Rand Paul wrote in a tweet that ‘our hearts are heavy tonight’ and that he and his wife ‘offer our deepest condolences to Rep. Andy Barr, his two daughters, family, and friends.’

‘Please join us in praying for them during this incredibly difficult time,’ the junior senator from Kentucky said.

‘Carol was a wonderful mother and wife, and she was beloved by all who knew her,’ Cameron said. ‘She will be deeply missed. My heartfelt prayers are with Andy, their children, and their entire family as they mourn this unspeakable loss.’

Democratic Senate candidate Amy McGrath, who lost in a challenge to Barr in 2018 for Kentucky’s Sixth Congressional District, wrote in a tweet that her ‘heart goes out to Andy and his two daughters over the tragic loss of Carol.’

‘They are in our prayers. While we were political competitors, we are Kentuckians first,’ McGrath wrote. ‘I hope they feel the love of many and we wish him great strength during this very trying time.’

‘While we may disagree politically, we’re both family men and I can’t fathom the pain he must be experiencing right now,’ Hicks said.