A Connecticut nanny accused of burning a 3-year-old’s hand and leg on a hot stove, swinging her by her hair and trapping her inside a toy chest has been sentenced to 15 years in prison.

Lidia Quilligana, 32, learned her fate during an emotionally charged sentencing hearing on Tuesday, six weeks after she pleaded guilty to second-degree assault, which was reduced from first-degree assault in exchange for pleading guilty to 24 counts of risk of injury to a minor.

Quilligana pleaded guilty to some charges under the Alford doctrine, meaning she doesn’t agree with all the evidence but acknowledges there’s enough for a conviction.

Nanny punished: Lidia Quilligana, 32, (pictured in court Tuesday) has been sentenced to 15 years after pleading guilty to abusing and torturing three children, ages three and one, in 2015 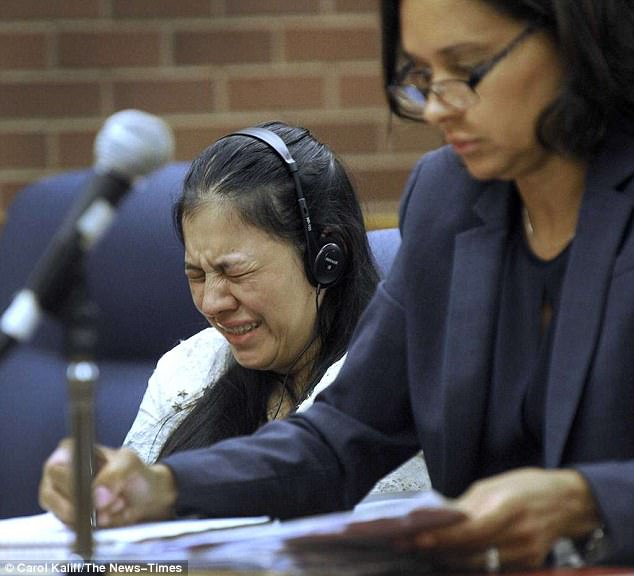 Crocodile tears: Quilligana sobbed in court and apologized for losing control while looking after her employers’ children, who prosecutors say were burned, beaten and tortured

The caretaker, an immigrant from Ecuador with three children of her own, was arrested in 2015 in Danbury after she was caught on a hidden camera repeatedly abusing her employers’ 3-year-old girl and 1-year-old twin siblings, according to The News-Times.

Prosecutors say she also ripped hair out of the children’s heads.

A defense attorney called Quilligana’s actions ‘unfathomable’ at Tuesday’s sentencing, but said she was not a ‘monster’ but ‘a sad person who lost control.’

The attorney also said Quilligana was abused as a child at the hands of her drunkard father and was using the only discipline she knew. 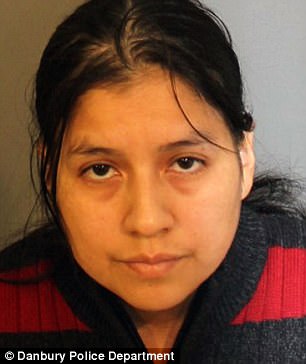 Plea deal: Quilligana, pictured in her mugshot, pleaded guilty in July to second-degree assault and 24 counts of risk of injury to a minor

An advocate for the three victims said the abuse suffered by the 3-year-old girl and her younger siblings could only be described as torture.

Quilligana had worked for the family for about a year when the abuse came to light. At the time of her arrest in March 2015, she was pregnant with her third child.

The family had set up the nanny camera in December 2014 after suspecting that something was happening to their eldest daughter.

On March 27, 2015, incident, the child’s mother had come home from work when she saw her daughter’s burned hands and black eye and asked Quilligana what happened, according to court records.

An arrest warrant said the nanny told the mother the child had placed a chair next to the stove and accidentally burned her hands before falling and injuring her head on one of the stove’s knobs.

But surreptitiously recorded video showed that it was Quilligana who dragged the toddler to the hot stove and placed her hands and legs against the burners.

The girl suffered from second-degree burns, according to The News-Times.

‘There was an amount of sustained and depraved cruelty that I’ve never seen before,’ said attorney Sharon Dornfeld, who was appointed to represent the victims. ‘She tortured those children.’

According to the prosecution, the nanny cam recorded 10 days’ worth of abuse in March 2015, showing Quilligana, among other things, causally picking up the three-year-old girl by the hair and swinging her around, ‘much like a track star swing a hammer,’ said Assistant State’s Attorney Warren Murray. 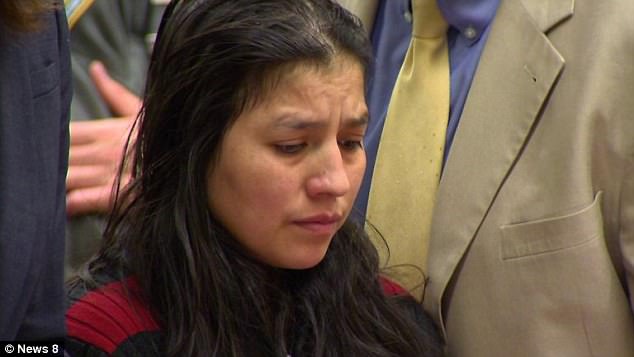 Her excuse: A lawyer for Quilligana, pictured in court in March 2015, said she was abused as a child at the hands of her drunkard father and was using the only discipline she knew

At another point in the recording, which has been sealed by the judge, Quilligana could be seen letting the toddler out of a toy box, where she had been confined, and ordering her to go upstairs, only to viciously slap the child across the face.

‘I couldn’t control myself,’ Quilligana said Tuesday through an interpreter. ‘Believe me, I loved those children with all my heart. I’m sorry a thousand times.’

The victims’ mother rejected the nanny’s apology and said in a statement there was no excuse for her conduct.

The judge agreed,  telling the defendant 15 years ‘doesn’t even come close to fitting the crime.’