Ultimate Fighting Championship fighter Conor McGregor offered high praise to President Trump on Twitter as he celebrated the three-year anniversary of his inauguration on Monday.

‘Phenomenal President,’ McGregor, who is Irish, tweeted, posting an image of a goat often use to symbolize the ‘Greatest of All Time.’

‘Most certainly one of them anyway, as he sits atop the shoulders of many amazing giants that came before him. No easy feet (sic). Early stages of term also. Incredible. Congrats and Happy Martin Luther King Jr. day America’, the fighter continued in a tweet that divided fans. 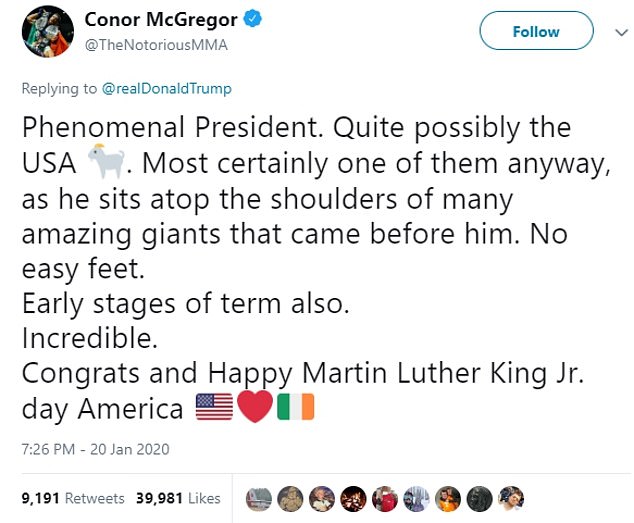 The former two-weight world champion McGregor’s tweet came in response to the president pointing out that it had been three years since he had entered office on Martin Luther King Jr. Day.

‘It was exactly three years ago today, January 20, 2017, that I was sworn into office,’ Trump wrote on Monday. ‘So appropriate that today is also MLK jr DAY. African-American Unemployment is the LOWEST in the history of our Country, by far. Also, best Poverty, Youth, and Employment numbers, ever. Great!’

The president was clearly delighted to receive McGregor’s seal of approval and on Tuesday he responded by congratulating the fighter in a reply to his original tweet: ‘Congratulations on your big @UFC WIN!’ Trump wrote.

In October, the Labor Department had indeed reported Black and Hispanic unemployment to be at record lows, according to CNBC. 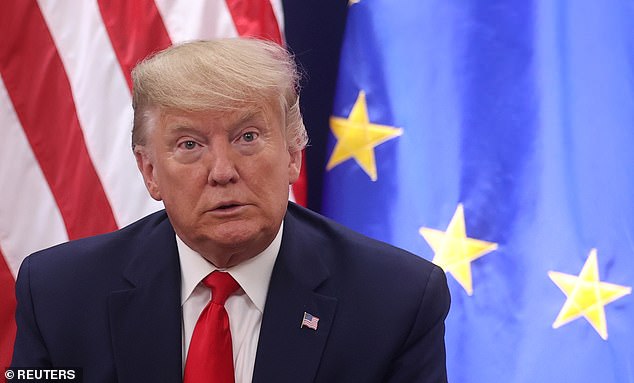 Fans were divided in their reactions to the posting with some some praising the Irishman for sharing his beliefs, while others criticized him.

Another posted: ‘Conor… No.’

‘These are the words of a man who has been hit in the head many, many, many times’ joked another.

But there were some fans who were happy at hearing the fighter share his political beliefs.

One wrote: ‘Wow literally the first athlete/celebrity that had the guts to praise Trump! Thank you!’

McGregor was also celebrating something of a high after defeating Donald Cerrone in just 40 seconds at UFC 246 on Saturday night.

It was his first victory in mixed martial arts since 2016. 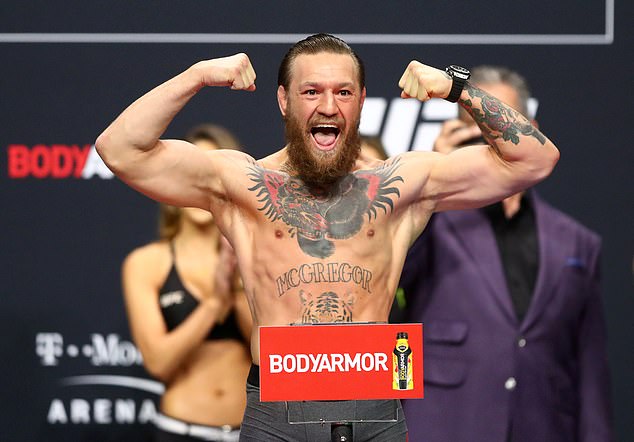 McGregor was also celebrating something of a high on Saturday after defeating Donald Cerrone in just 40 seconds at UFC 246 on Saturday night.