By Michael Nam For Dailymail.com and Bhvishya Patel For Mailonline

A conservative advocacy organization ratcheted up its feud with Congresswoman Alexandria Ocasio-Cortez on Thursday over Amazon’s decision to back out of its planned second headquarters in New York.

The two new Times Square billboards funded by the Job Creators Network (JCN) are a response to Ocasio-Cortez’s Tweet slamming its first billboard criticizing her involvement in Amazon’s decision.

‘Hey AOC, Saw your wack tweet,’ reads the higher of the two billboards located on 7th Avenue and 42nd Street.

A longer billboard with the heading ‘AMAZON PULLOUT’ below expands the specific issues the JCN has with the congresswoman from Queens: 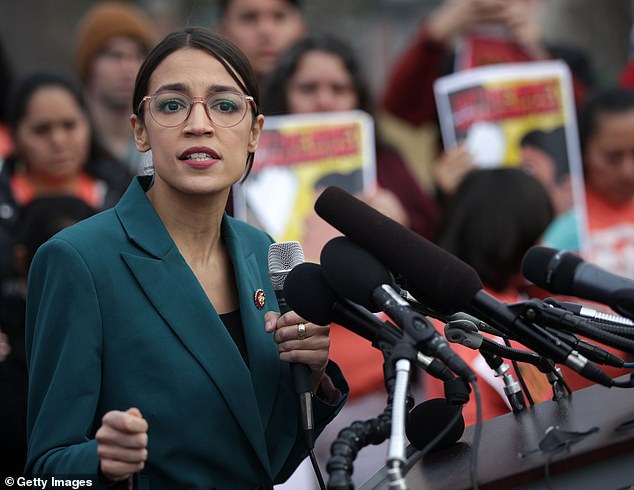 Congresswoman Alexandria Ocasio-Cortez had fired back at a Times Square billboard after it criticized her controversial role in Amazon’s pullout, but new billboardsby t

JCN writes in a press release that the billboards were meant to ‘poke fun at the tweet’ by Ocasio-Cortez that she had made in response to its billboard on Wednesday.

‘Few things effectively communicate the power we’ve built in fighting dark money & anti-worker policies like billionaire-funded groups blowing tons of cash on wack billboards (this one is funded by the Mercers),’ the congresswoman tweeted then. ‘(PS fact that it’s in Times Sq tells you this isn’t for/by NYers).’

She further went on to say: ‘Billionaires paying to put up anti-progressive propaganda in Times Square is like the obscenely rich version of the scene where Michael Scott points to the Bubba Gump and saying ”This is it, this is the heart of civilization, right here”.’ 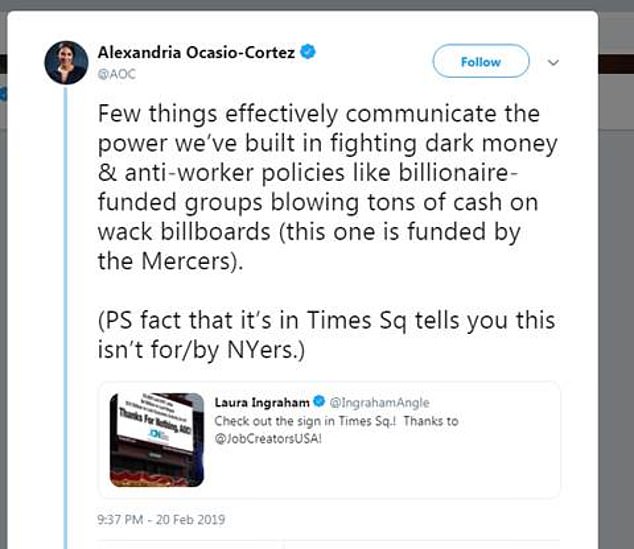 The congresswoman responded to the Times Square billboard in a tweet to her 3.2million followers on Wednesday 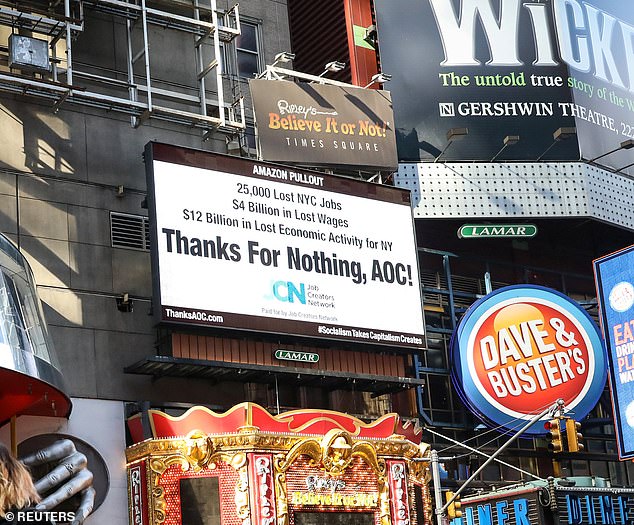 Ocasio-Cortez has consistently defended her decision in stopping the tech giant’s plans arguing that the move would have affected local residents.

‘Facts are facts: while the Job Creators Network did spend some money highlighting the economic consequences of the Amazon pullout, Ocasio-Cortez deprived New York of 25,000 new jobs and $4 billion in annual wages,’ said Alfredo Ortiz, JCN President and CEO in the press release.

‘She can call us out all she wants about how we spend our money, but it’s clear that most people care more about how she spends theirs.’

Neither the billboards or the press release addressed the issue of the JCN’s funding or the dig the congresswoman made about their location in Times Square as not being for New Yorkers.

Bernard Marcus, a billionaire donor to Donald Trump’s 2016 campaign, founded the Job Creator’s Network, and the group has received funding from the Mercer Family Foundation, a billionaire family’s organization that donates to conservative causes, according to Business Insider.

Amazon announced its decision to abandon plans for a second headquarters in New York last week on Valentine’s Day.