When ABC cancelled Roseanne on Tuesday over a racist tweet written by the show’s star, conservatives rushed to defend the actress.

Many said that Roseanne Barr wouldn’t have lost her job if she was a liberal.

‘Maybe if Roseanne had just lied about what she tweeted, blamed non-existent “hackers” and stuck to what was obviously a bogus excuse for weeks, the media would have immediately forgiven her. Oh I forgot, she’s a conservative. Totally different rules,’ Paul Joseph Watson, editor-at-large of Infowars, said in a tweet that was retweeted by Barr.

Conservatives showed their support for Roseanne Barr on Tuesday, after her show was called over a racist tweet

Infowars host Alex Jones, a conspiracy theorist, invited Barr onto his show after the scandal saying ‘it’s time for you to strike back against these THOUGHT POLICE’ 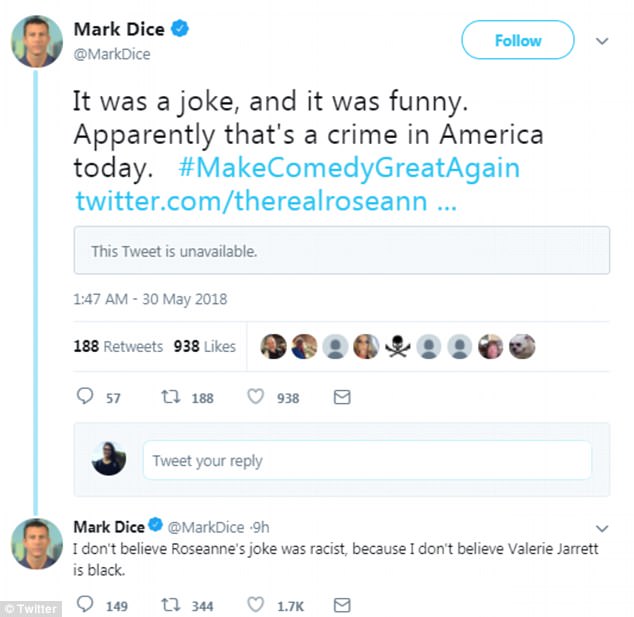 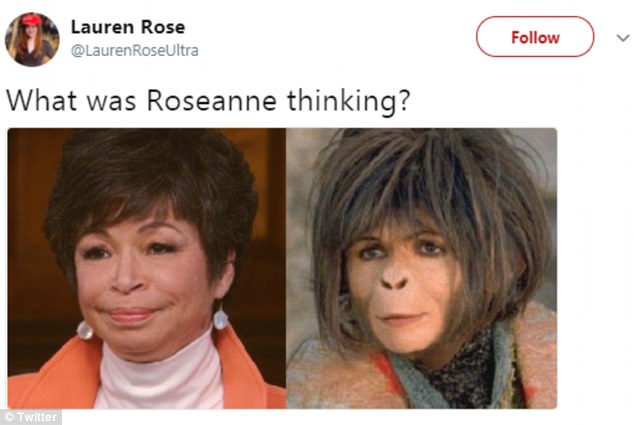 Lauren Rose, a white nationalist, also jumped to Roseanne’s defense with this tweet suggesting Barr’s comparison of Jarrett to a Planet of the Apes character was correct

Some said Barr’s public shaming was a media conspiracy plot.

‘In the past 24 hours, Roseanne has attacked the legitimacy of themedia, shared Tommy Robinson’s story, and mentioned George Soros and now she is being slandered as an evil racist (#1 top trending). This is an obvious smear job for challenging the authority of the media,’ Lauren Rose, a self-described white nationalist, tweeted.

‘Normal Americans are watching in absolute shock as leftist maniacs indulge in yet another political sacrifice. It won’t end well for you guys,’ one Twitter user named Thomas Wictor wrote.

Barr retweeted both of their tweets as well. 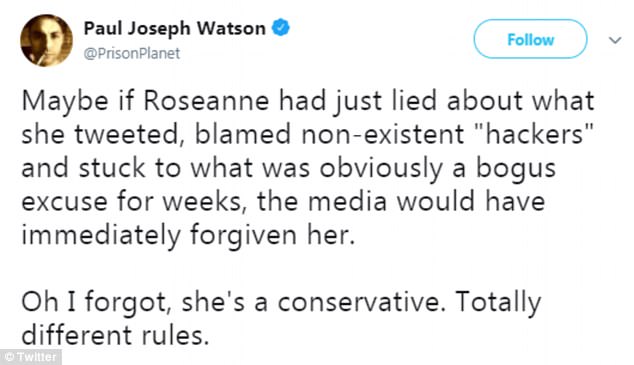 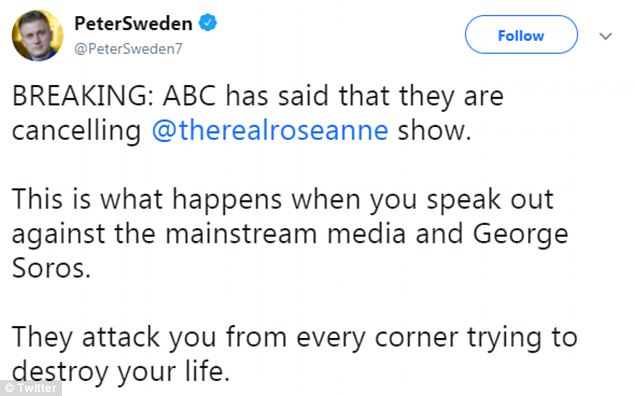 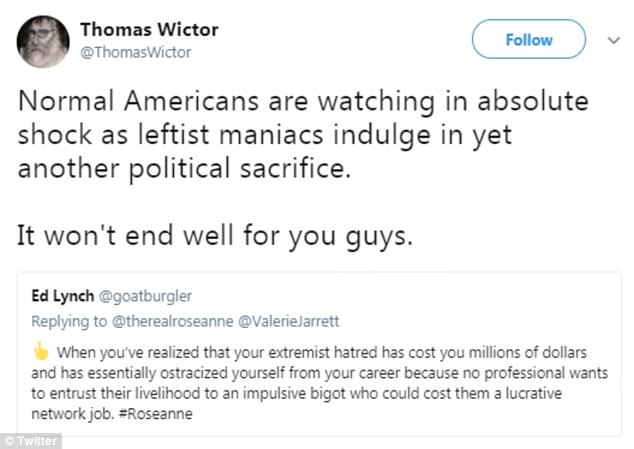 Many right-wingers on Twitter pointed to previous controversies involving liberal comedians, who made what they believed to be ‘racist’ comments without facing public scorn.

Do You remember when the Jimmy Kimmel show got cancelled because of his racist “jokes” about the First Lady? Me Neither,’ Twitter user Rain Maker wrote.

The controversy that user was referring to was a segment in Kimmel’s monologue from April, in which he mocked the First Lady’s accent.

Swedish ring-wing journalist Peter Imanuelsen pointed to Bill Maher, who has compared the president’s hair to an orangutan’s in the past but didn’t face the same backlash.

‘If @billmaher doesn’t get cancelled by @hbo now, then we know there is a double standard in the media. We are all watching,’ Imanuelsen wrote. 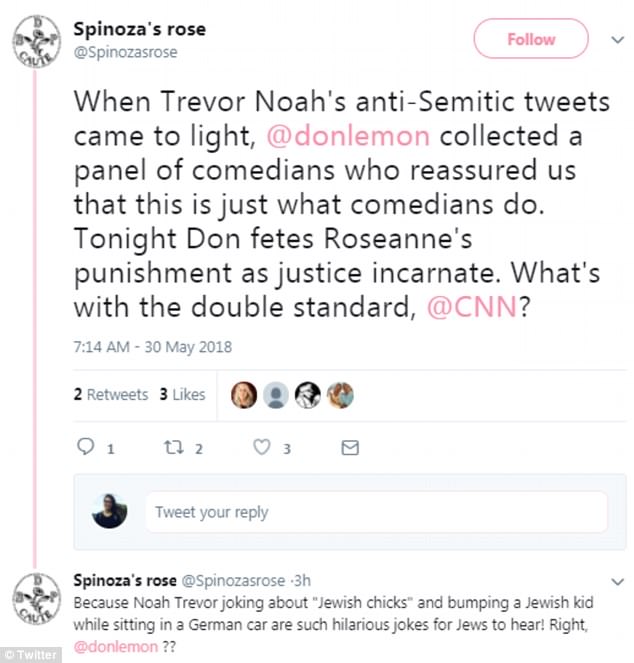 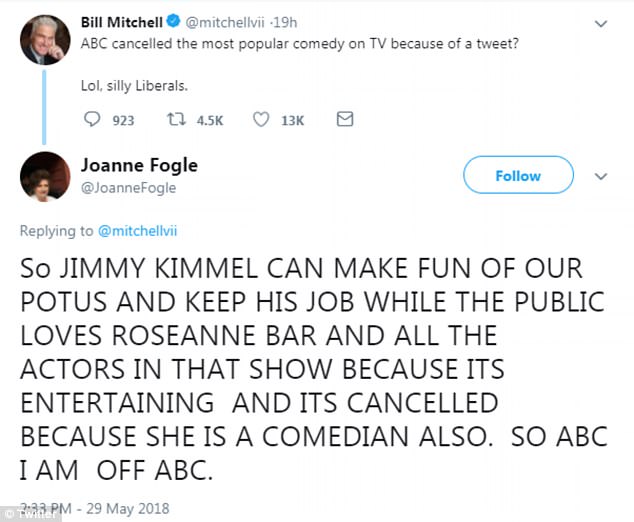 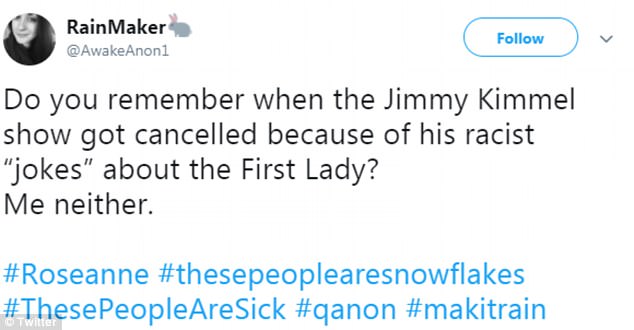 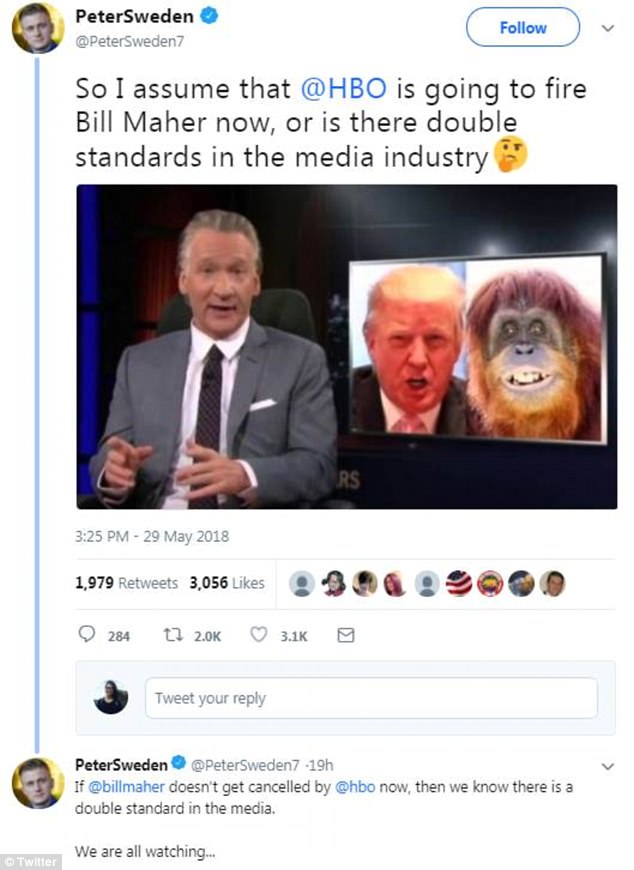 Imanuelsen pointed to Bill Maher, who has compared the president’s hair to an orangutan’s in the past but didn’t face the same backlash 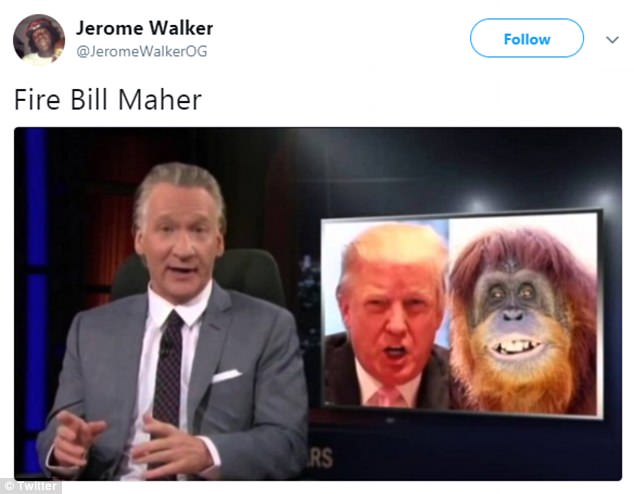 Twitter user Kyle Morris asked why ABC didn’t terminate Joy Behar’s contract when, in 2013, she said people who think they can talk to Jesus are ‘mentally ill’.

Others brought up comments made by Trevor Noah, now host of the Daily Show.

‘When Trevor Noah’s anti-Semitic tweets came to light, @donlemon collected a panbel of comedians who reassured us that this is just what comedians do. Tonight Don fetes Roseanne’s punishment as justice incarnate. What’s with the double standard, @CNN?’ one Twitter user asked.

The controversy that user spoke about dates back to 2015, when Noah was announced as Jon Stewart’s replacement as host of the Daily Show and people started looking through his years of tweets.

Among the tweets were two that some considered ‘anti-Semitic’.

The first was written in 2009 and describes how Noah almost ‘bumped a Jewish kid crossing the road’.

‘He didn’t look b4 crossing but I still would hav felt so bad in my german car!’ he wrote.

The other tweet was from 2012, and was in relation to soccer star Lionel Messi.

‘Messi gets the ball and the eral players try foul him, but messi doesn’t go down easy, just like jewish chicks #ElClasico.’

One of the Roseanne stars, Wanda Sykes, was also brought up. Sykes immediately quit the show after Roseanne’s tweets on Tuesday. 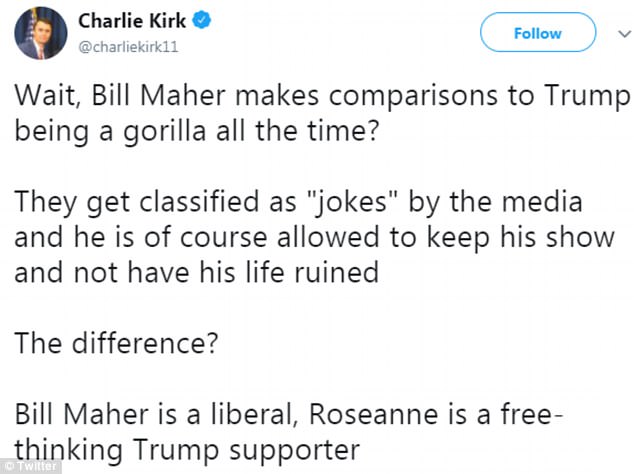 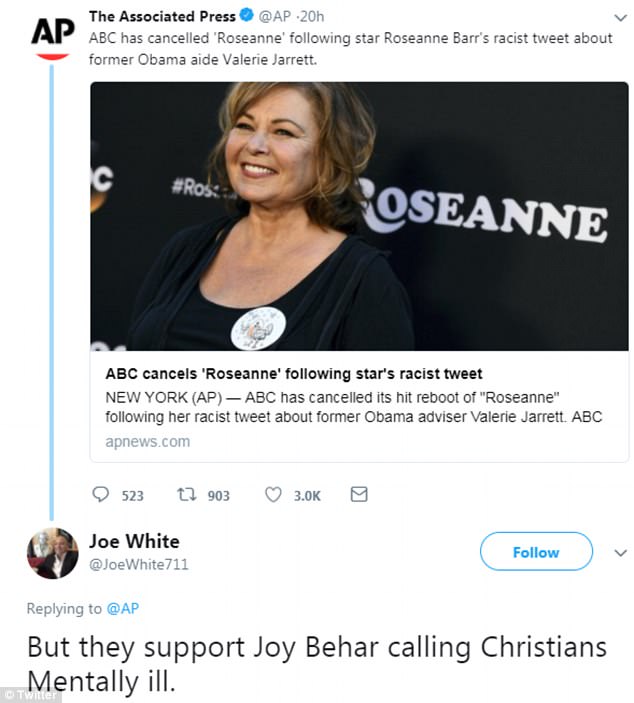 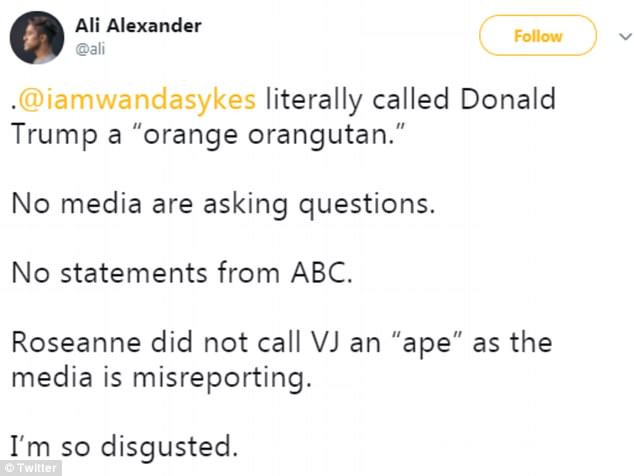 Critics brought up a stand-up performance from November 2016 in which she called Trump an ‘orange orangutan’.

Many critics have claimed that Sykes was booed off the stage for those comments, but Sykes said at the time that she finished out her set.

Following the cancellation, Barr took to Twitter, apologized to Jarrett and asked her supporters not to make excuses for her words.

‘Guys I did something unforgivable so do not defend me. It was 2 in the morning and I was ambien tweeting-it was memorial day too-i went 2 far & do not want it defended-it was egregious Indefensible.’

However, she has continued to retweet several supporting messages, defending her actions.