While the influential magazine said the car has exhilarating acceleration and handling, testers were troubled by its 152-foot average stopping distance from 60 miles per hour in emergency braking tests.

It refused to recommend the vehicle – causing the firm to admit to a problem with its software and issue a firmware update within days.

Long emergency stopping distances, difficult-to-use controls and a harsh ride stopped Tesla’s Model 3 electric car from getting a recommended buy rating from Consumer Reports. It tested the car at its track on pavement monitored for consistent surface friction

WHAT IS THE TESLA MODEL 3 BRAKING ISSUE?

While the magazine said the car has exhilarating acceleration and handling, testers were troubled by its 152-foot average stopping distance from 60 miles per hour in emergency braking tests.

The magazine said the distance was worse than any modern car it has tested, and is about 7 feet longer than a Ford F-150, a full-size pickup truck that weighs about twice as much as a Model 3.

Tesla said in a statement that its own tests found 60-to-zero braking distances averaging 133 feet.

It also says it continually does software updates to improve factors such as stopping distance.

Last week, after CR’s road test was published, Tesla CEO Elon Musk tweeted that the firm would fix the issue ‘within days’.

The firm has also addressed several other issues raised by Consumer Reports, including the placement of some controls on its touchscreen.

Even Consumer Reports admits it was stunned by the speed of the fix, which is described as ‘unheard of.’

‘I’ve been at CR for 19 years and tested more than 1,000 cars,’ says Jake Fisher, director of auto testing at Consumer Reports, ‘and I’ve never seen a car that could improve its track performance with an over-the-air update.’

Tesla revealed earlier this week it has begun upgrading the braking software on its Model 3 after Consumer Reports refused to recommend the car over braking distances.

Consumer Reports said it was getting a 152-ft average stopping distance from 60 mph, while Tesla claimed an average of 133 feet in their own tests.

Musk initially responded to the article saying that it was surprising, but the results would be investigated to see if something could cause the braking distance to be inconsistent.

He later said that they found an issue with the ‘ABS calibration algorithm’ that could result in some inconsistent results.

According to Electrek, owners have already begun receiving the update.

Now, Musk claims the performance has been improved in a firmware update which is already being sent to cars

Responding to the review by influential U.S. magazine Consumer Reports which stopped short of recommending the car, Musk said in a round of tweets late on Monday that the magazine’s tests – which used two separately-sourced vehicles – had been of older versions of the car that had already been improved upon.

The issue, which ate into gains for Tesla shares last week, came at a time when Tesla is dealing with reports of crashes involving its vehicles and growing scepticism over its finances.

Tesla stock is down around $100 dollars since last September.

‘With further refinement, we can improve braking distance beyond initial specs. Tesla won’t stop until Model 3 has better braking than any remotely comparable car,’ Musk wrote in exchanges with other twitter users. 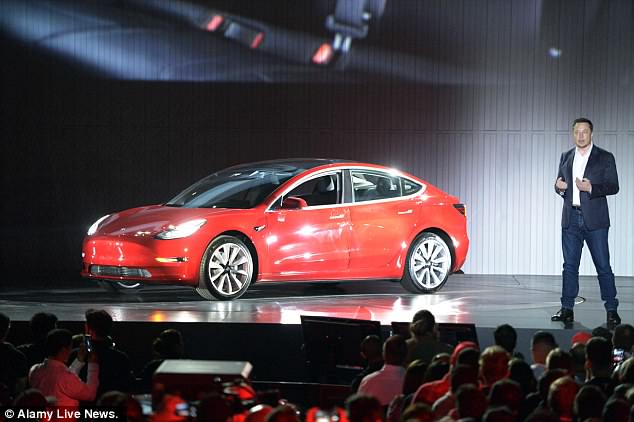 Tesla-CEO Elon Musk speaks during the delivery of the first Tesla Model 3 in Fremont, US. He has played down a report identifying ‘big flaws’ in its Model 3 sedan, admitting there is a braking issue with the vehicle but saying it will be fixed within days.

Production of Tesla Model 3s began in July of last year and the first regular customers only received their cars in December after some Tesla employees.

Consumer Reports said in the review on Monday that it had sourced a second privately-owned Model 3 to confirm initial results that showed the sedan braked slower than a full-sized pickup truck.

The report did not mention the age of either car used in the testing.

Calling the review ‘very strange’, Musk also said that the variability in stopping distance was due to an ABS (Anti-Skid Braking System) calibration algorithm.

‘The CR braking result is inconsistent with other reviewers, but might indicate that some Model 3s have longer braking distances than others,’ he said.

‘If so, we will address this at our expense. May just be a question of firmware tuning, in which case can be solved by an OTA software update.’

Analysts said the magazine’s story was a bad advertisement for Tesla.

‘While the negative reports of braking issues will not deter Tesla brand enthusiasts, it might raise doubts among the more casual buyer,’ said Neil Saunders, Managing Director of consumer research house GlobalData Retail.

‘It is important not to be too harsh on Tesla as other vehicles have had their share of safety and technical issues.

The issue for Tesla is that unlike other car companies, it is a young brand that needs to win people over so can´t afford too many missteps.’