Jesse Lingard has seen his fortunes lifted just at the moment his friend and team-mate Marcus Rashford is experiencing the first major challenge of his career.

Lingard now has 13 goals for the season after coming off the bench to score the winning goal against Chelsea on Sunday and is increasingly one of Jose Mourinho’s most trusted forward players.

Lingard was introduced before Rashford as United pursued a winner and the latter player has seen his involvement reduced following a dip in form and the arrival of Alexis Sanchez.

Here, Sportsmail assesses the fortunes of Lingard and Rashford… 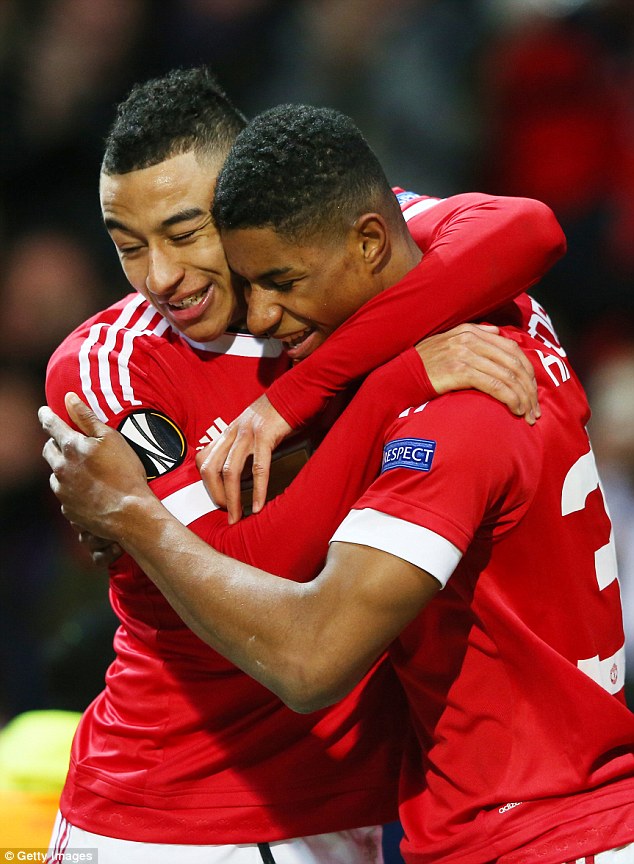 The Manchester United pair have experienced contrasting fortunes this season

What does Mourinho see in Lingard?

To add to his energy and diligence, Lingard has added a ruthless edge this season by scoring 10 goals since December.

And he scores in big games, scoring the winner in the FA Cup final against Crystal Palace in 2016, the EFL Cup final against Southampton last season, claiming two goals in the victory at Arsenal in November and heading the crucial winner against Chelsea on Sunday. 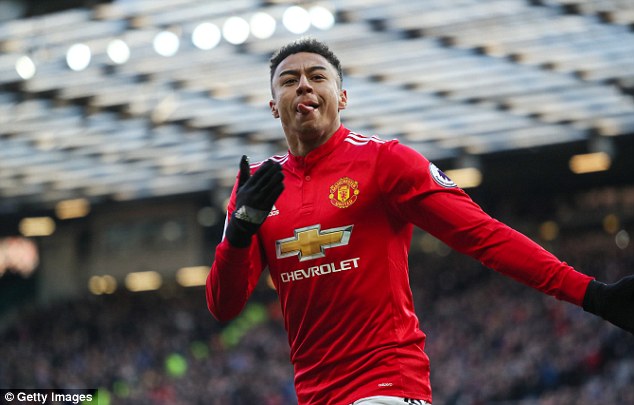 Have United always seen this potential in Lingard?

Many years ago now, Ferguson invited Lingard and his father into his office at Manchester United’s training ground and told them the player could become the next Jean Tigana.

Lingard had loan spells at Birmingham, Leicester, Brighton and Derby and did not always look like a player of Manchester United match-winning potential.

When Lingard was 19, Ferguson said: ‘Jesse is going to be some player. Tigana never got into the limelight in France until he was about 24, and I think that will be the same with Lingard. He will become a player when he’s 22 or so.’

Ferguson was proved right, as Lingard made his Premier League United debut just before he turned 22 and now 25, he is in the form of his life. 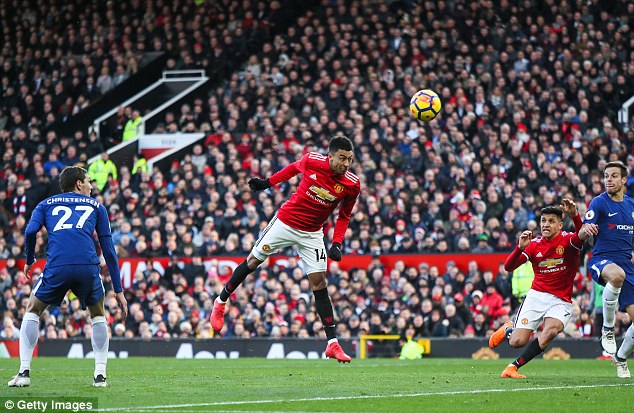 Whose place has Lingard taken?

Mourinho has never been keen on granting Juan Mata a central attacking midfield role, with the Spaniard more often deployed drifting in from the right flank, while Lingard’s form dislodged Henrikh Mkhitaryan to the extent the manager could dump the Armenian in the January transfer window.

He has also made life difficult for Paul Pogba, with Lingard operating in the forward midfield role and the Frenchman asked to sit deeper in a more restricted position. It is a testament to Lingard’s improvement. 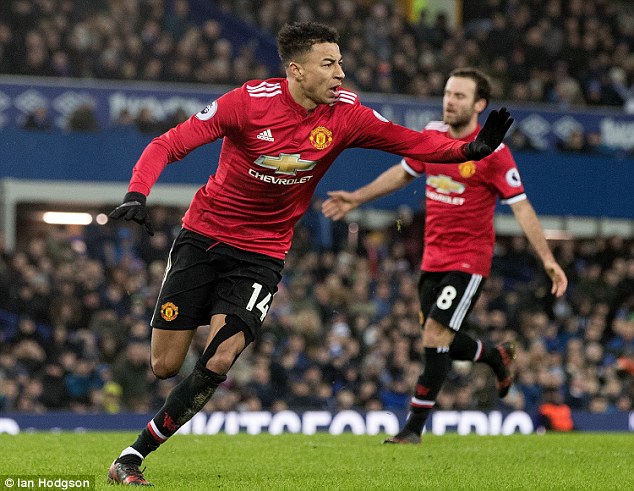 How is Lingard’s relationship with Mourinho?

Last season, Mourinho demanded improvement from Lingard, asking the midfielder to rid his game of inconsistency. Lingard veered from superb to average all too easily but now his performances are good or great.

Lingard has bought into the Mourinho mentality, telling The Sunday Times: ‘Mourinho is driven. Training has more edge to it. Everyone wants to win. When you lose a training game, you’re down all day and getting wound up by the other team.

‘Every game is the same. No change. It doesn’t matter the competition, we go in with a winning mentality.’ 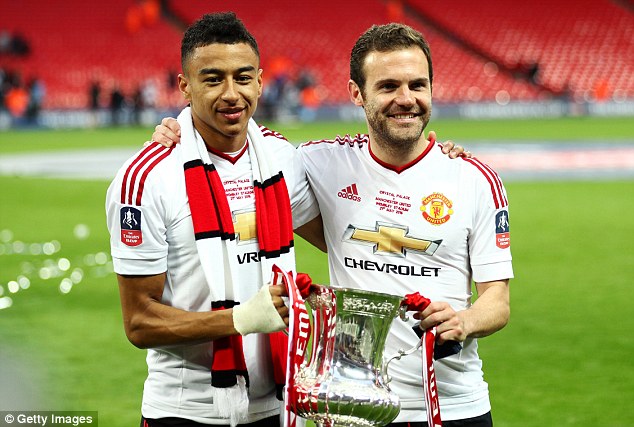 How has Rashford’s progress stalled?

Rashford made an explosive start to the season, scoring five for United by mid-September and also scoring a stunning winning goal for England against Slovakia.

However, he has started only five games since the Manchester derby defeat by Manchester City on December 10. Three of the games he has been placed in the starting XI were against Bristol City, Derby and Yeovil in domestic cup competitions. 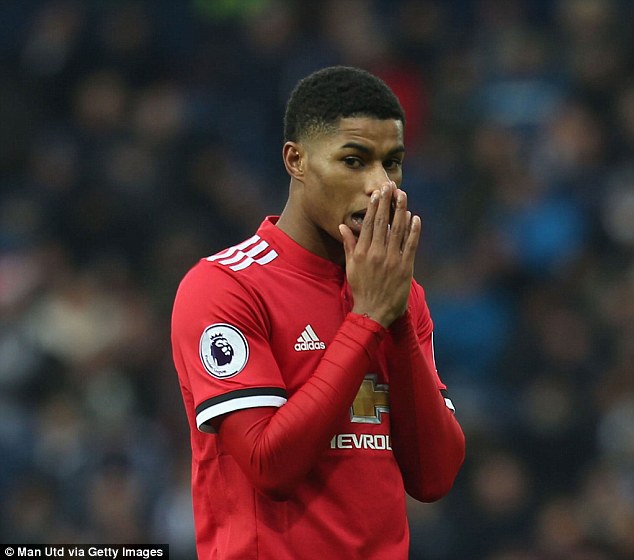 Why is there cause for concern?

Back in the autumn, Rashford looked like the present and future for United and England.

Since then, his career has entered something of a lull and it will be interesting to see where England manager Gareth Southgate places Rashford in his estimations in the upcoming friendly games in March ahead of the World Cup.

Neville told Sky: ‘He’s had a lot of playing time this season, a lot of minutes on the pitch and up until a few games ago had taken part in every match. When you’re a young player coming into the team, you’re not all of a sudden going to play every game for the rest of your career.

‘Ryan Giggs did that, but he’s an exception. When I and David Beckham came into the squad, there are periods where you are in the side for 10 or so matches, in great form, then you dip a bit, then you come back in.’ 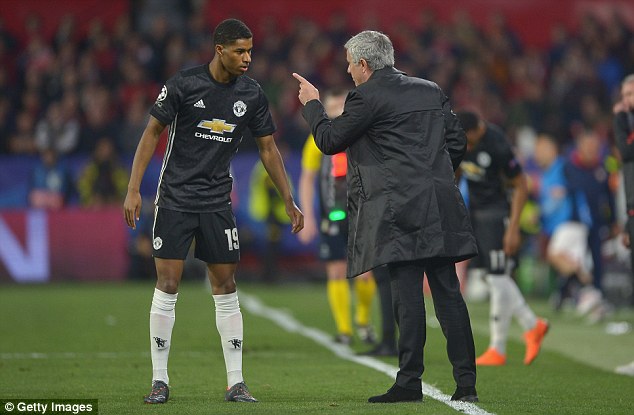 When will that return to the side come?

Rashford, we should remember, has experienced a lot in his first two-and-a-half years as a senior footballer.

He has started in FA Cup and Europa League finals, carried England’s qualification hopes on his shoulders, and often been Manchester United’s flicker of hope. He is still only 20 years old and remains on the world’s great young talents.

His problem, however, is that Romelu Lukaku appears to start almost every game and Alexis Sanchez is being granted the same treatment in his early time at the club as Jose Mourinho seeks to speed up his integration.

He may, however, sense opportunity on the right flank, where Juan Mata and Anthony Martial have been up and down in their form of late. 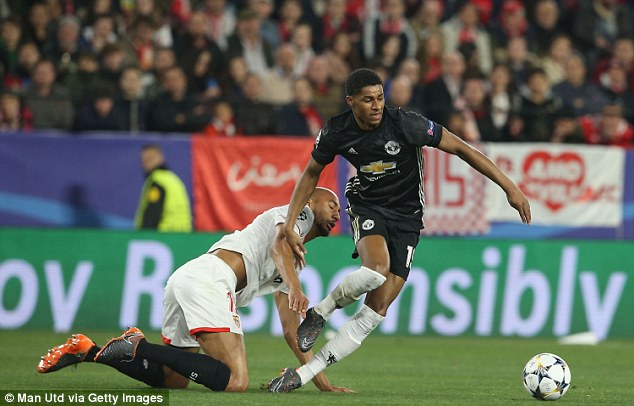 How is his relationship with Jose Mourinho?

He has proved his willingness to hand academy graduates opportunities with the run granted to Scott McTominay and Jesse Lingard this season, while Mourinho has demonstrated his trust in Rashford at different points in the past 18 months.

Mourinho has been exasperated by Rashford’s profligacy, most notably in the 2-2 draw at Leicester in December but remains an admirer.

Mourinho said in January: ”The monster that kills the little kids’ arrived but he plays every game since then, starting or coming from the bench, as a striker, left winger, or right winger. Then he goes to the national team.

‘The kid is having a hell of an experience at every level, so an amazing future wait for him. But the whole story of Marcus – will he get minutes and matches? – that story is really old, because he’s a very important player for us.’

Rashford needs to force himself back into the picture a little but he has the talent and mentality to do so. 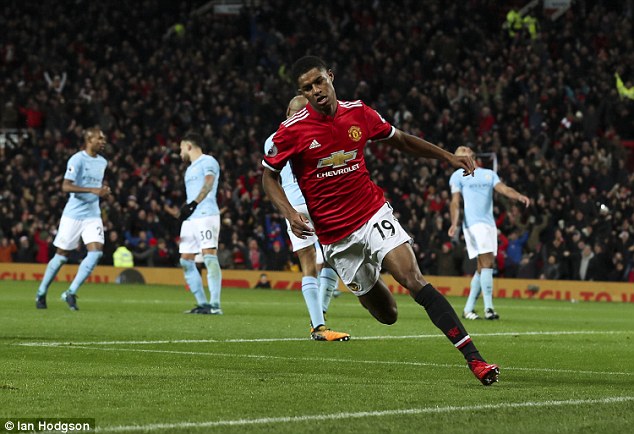