Hundreds of demonstrators swarmed the streets of New York City’s Harlem neighborhood to protest a fare-evasion crackdown on public transit and the NYPD on Friday night.

The crowd of more than 200 people carried signs reading, ‘F*** the Police,’ ‘Free Transit,’ and  ‘NYPD out of MTA’ as marched from Harriet Tubman Memorial on Frederick Douglass Boulevard through Upper Manhattan.

At least 58 demonstrators are reported to have been arrested, with videos and clips of civilian standoffs involving police uploaded to social media.

Hundreds of protesters took to the streets in Harlem, New York, to protest a proposed increase in NYPD officer presence in the subway system

In a clip clip on Twitter, video shows a handful of police officers in the midst of an arrest as fellow protester.

The tweet’s caption reads: ‘NYPD has been absolutely brutal with the [FTP] march in Harlem. They’ve made numerous violent arrests tonite. During this arrest, the person said “I can’t breathe” & one of the cops next to me said “if he can yell, he can breathe.”‘

Although the original post claims the officer says ‘yell,’ it is possible that the officer allegedly said ‘scream.’

NYPD has been absolutely brutal with the #FTP march in Harlem. They’ve made numerous violent arrests tonite. During this arrest, the person said “I can’t breathe” & one of the cops next to me said “if he can yell, he can breathe.” pic.twitter.com/kX7m3gW20Z

The protests come in the wake of New York Governor Andrew Cuomo’s call for an additional 500 Metropolitan Transportation Authorities (MTA) officers to patrol the subway lines.

This, combined with several viral videos showing MTA officers using what citizens believe is excessive force during arrests, has sparked the beginnings of a social movement in New York City. 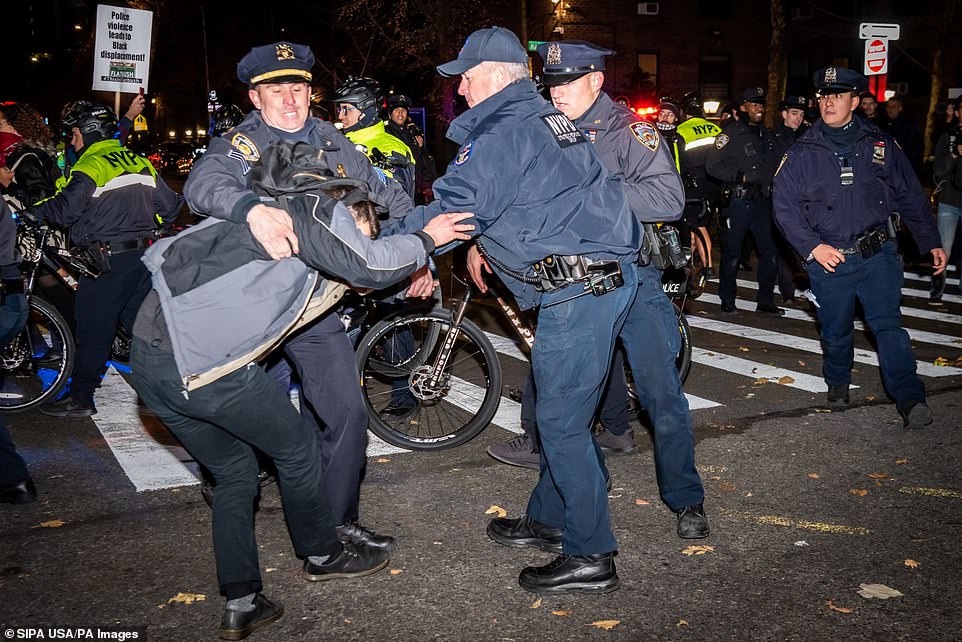 Pictured: A civilian being held by two NYPD officers during the demonstration as fellow activists continue to rally behind them 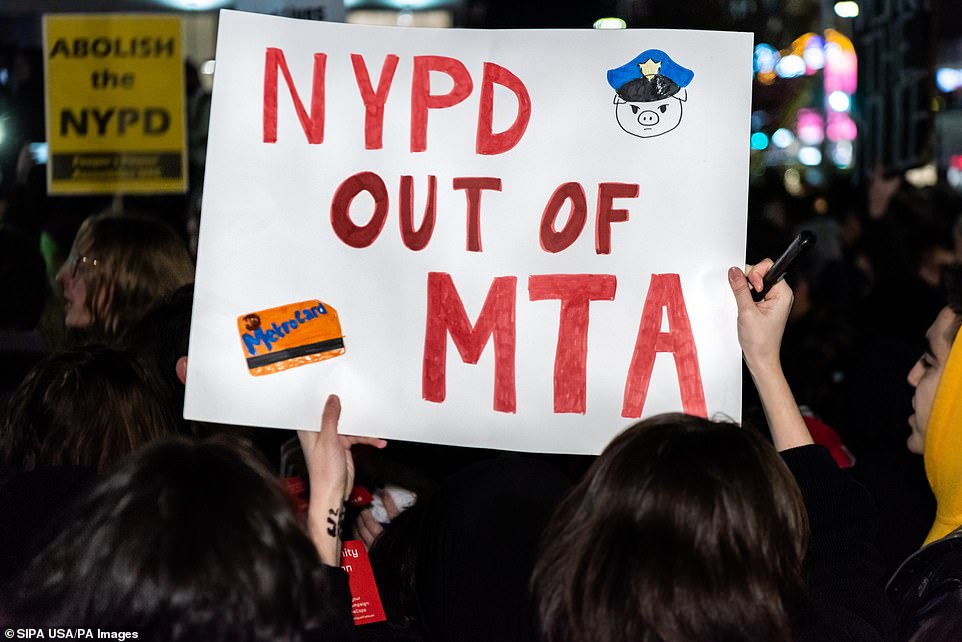 Many attendees carried signs and banners calling out NYPD officers who patrol the subway lines, including this sign that says ‘NYPD out of MTA’

One video showed at least 10 police officers pointing guns into a subway car as they prepared to arrest an unarmed black man.

The 19-year-old, who was seated inside the subway car and had his hands up, was thought to have a gun, but did not. He was later charged with theft of services.

The Friday night rally was organized by a group called Decolonize This Place and they released photos of an email outlining the reasons for the protests. 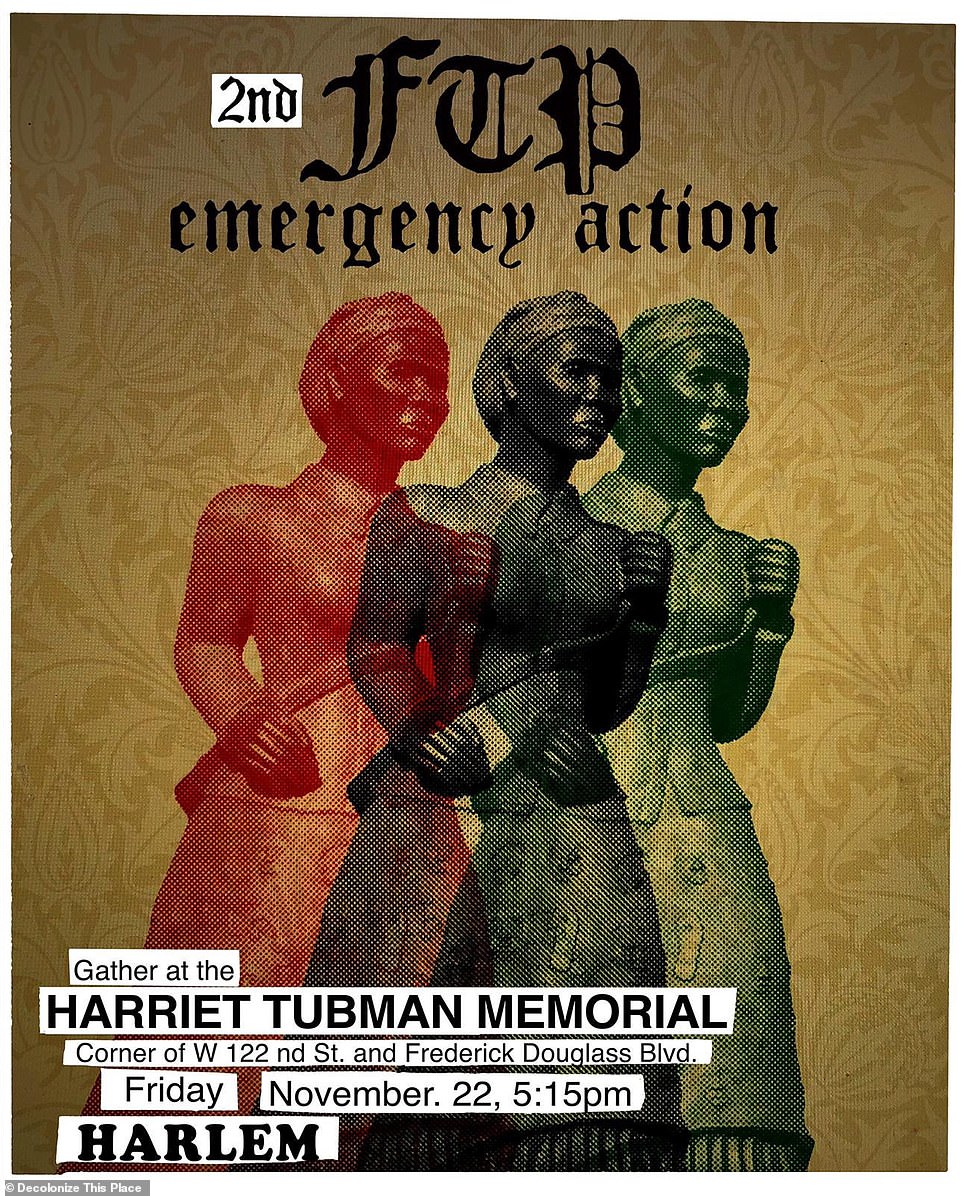 Decolonize This People, the organizers of the ’emergency action’ cited police brutality against people of color and Governor Andrew Cuomo’s installation of 500 additional officers to subway stations as reasons for the demonstration

It read: ‘All over this city, police are hunting Black and brown people on the subways. Every day a new image of this violence appears: cops punching and pulling guns on teenagers, arresting churro vendors, tackling kids selling candy, dragging people for resting on a bench.’

‘With 500 new cops on the MTA, intensifying police violence against our people, accelerating gentrification and the city’s approval of 11 billion dollars for new jails, we refuse to tolerate this criminalization of poverty any longer,’ the statement continued. 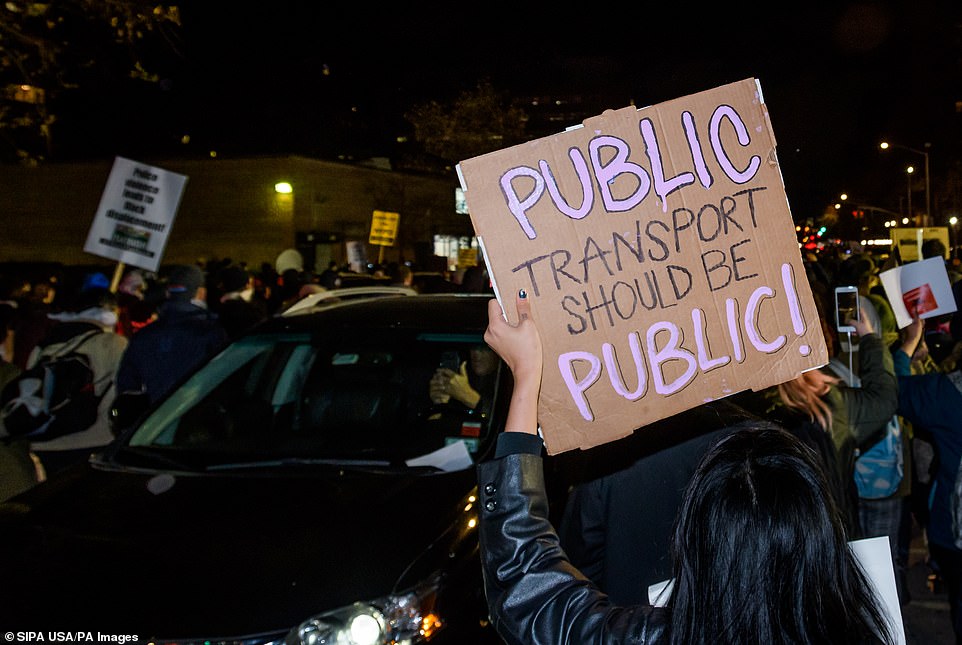 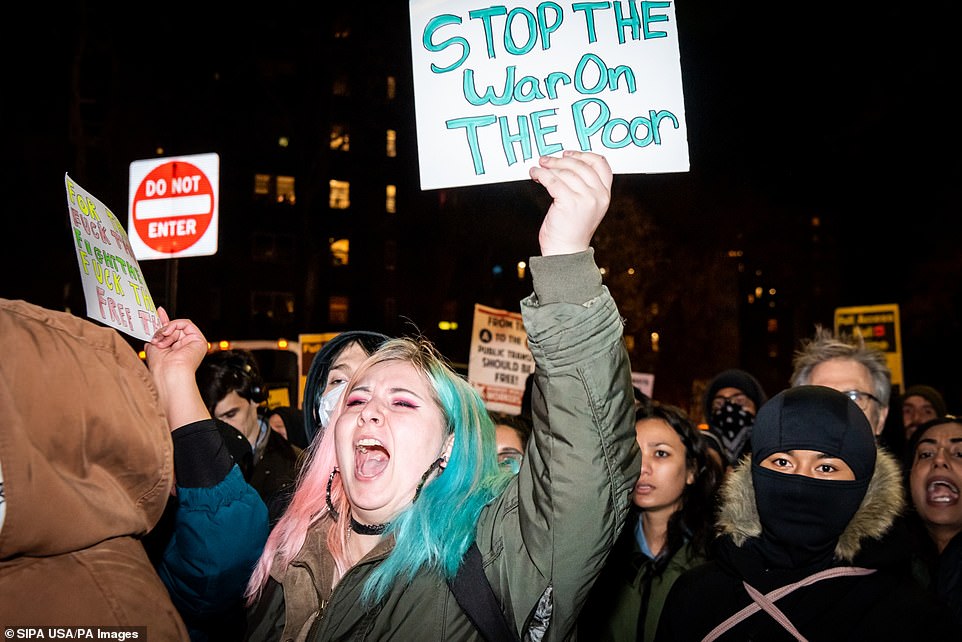 Pictured: a group of protesters marching and holding signs saying, ‘Stop the war on the poor’ on Friday night

The group then suggests the money should be redistributed to maintaining public housing.

‘We demand the removal of NYPD from the subways. And we say that those funds should go to fixing the MTA and making it free, as well as repairing NYCHA – not the continuing harassment, detention and brutalization of our people.’

On social media, the protest has been branded as ‘FTP Emergency Action,’ which stands for ‘F*** The Police.’

Protesters began the march at 5.30pm after chanting, ‘From the A to the D, public transport should be free.’ 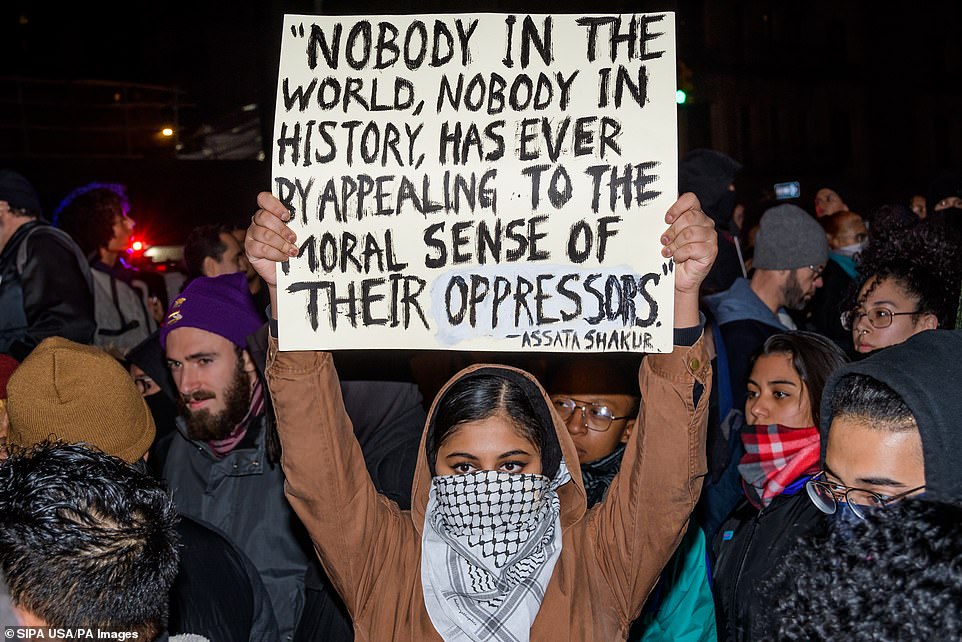 Protesters shouted chants as they marched, like: ‘From the A to the D, public transport should be free’ 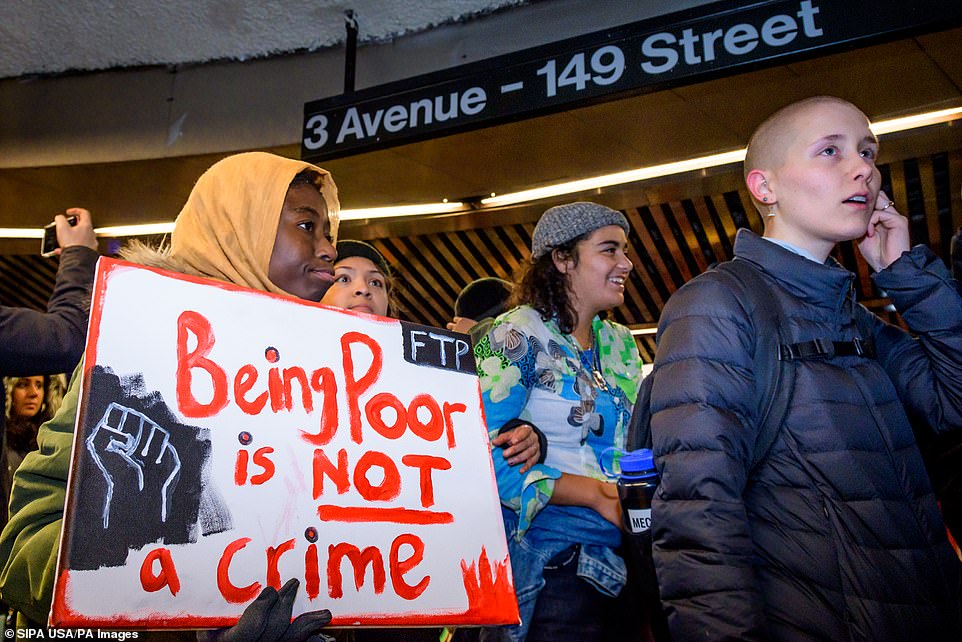 Decolonize This People: ‘With 500 new cops on the MTA, intensifying police violence against our people, accelerating gentrification and the city’s approval of 11 billion dollars for new jails, we refuse to tolerate this criminalization of poverty any longer’

In response to the protest, the NYPD dispatched several officers to various points along the marching trail.

Officers made a human barricade, accompanied by police cruisers and other emergency vehicles.

Video shows  protesters encountering a line of waiting officers at a crosswalk at an intersection.

After a few seconds of tense waiting, it shows the officers breaking formation and making contact with protesters. 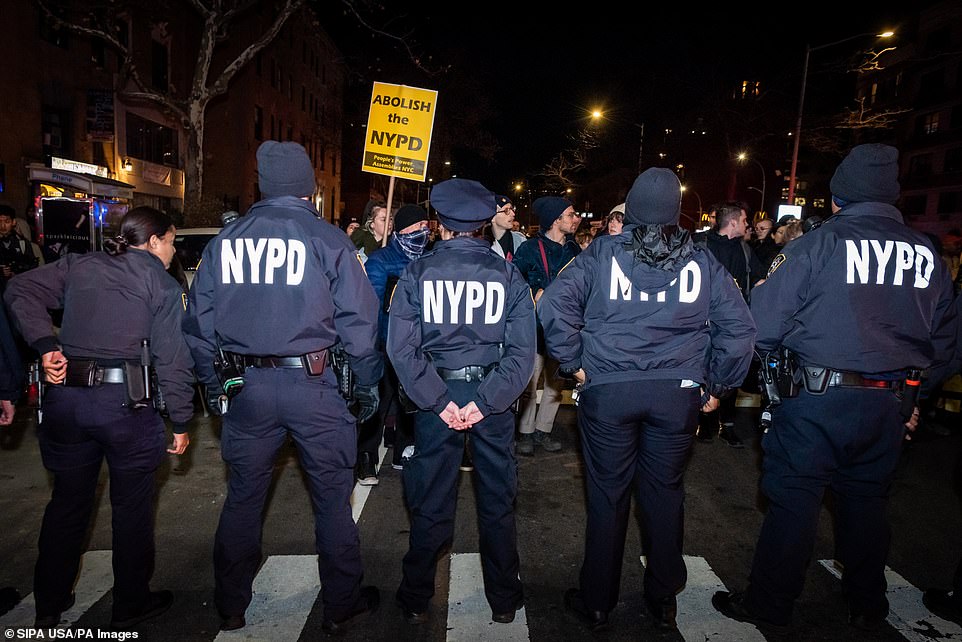 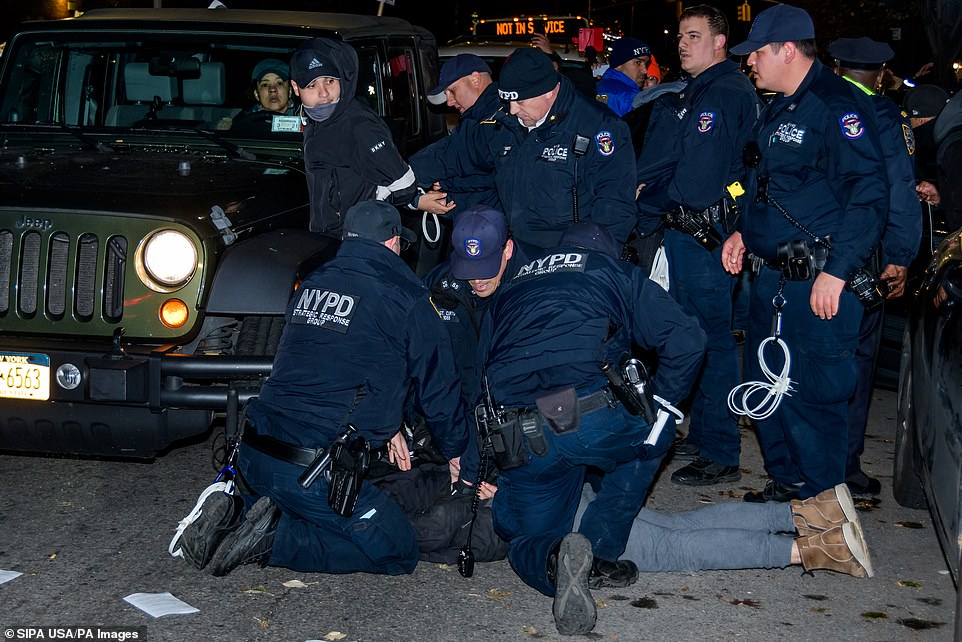 Part of the night consisted of demonstrators hoping subway turnstiles as a sign of protest against Cuomo’s declaration.

Videos and photos show people clearing the barriers by the dozen.

At one point, the NYPD blocked access to the 125th Street subway station as a precaution and cautioned commuters that ‘protest activity’ could affect commute times. 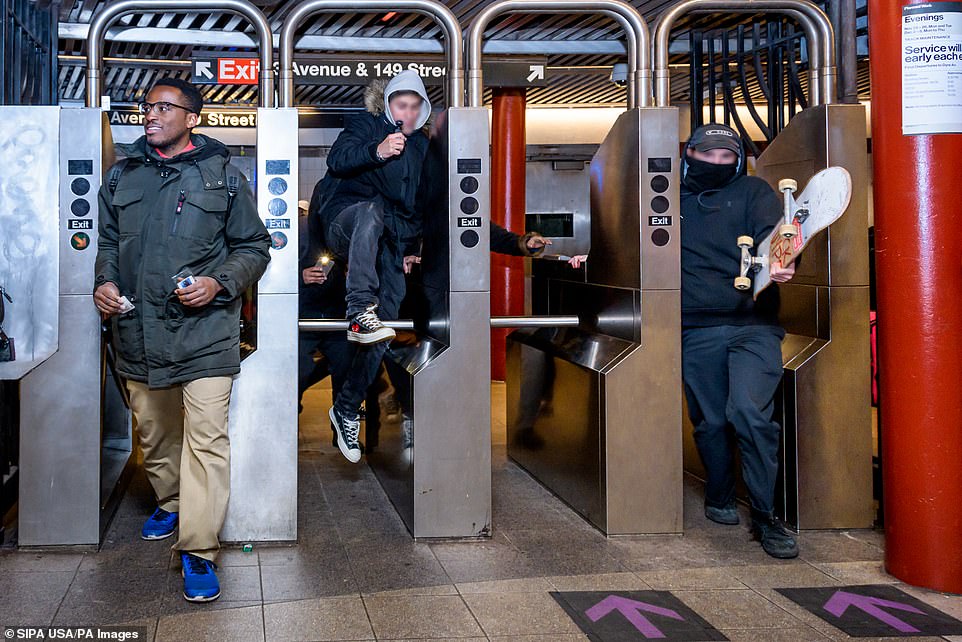 As a part of the protests, several people went into subway stations and hoped the turnstiles without paying the mandatory riding fee 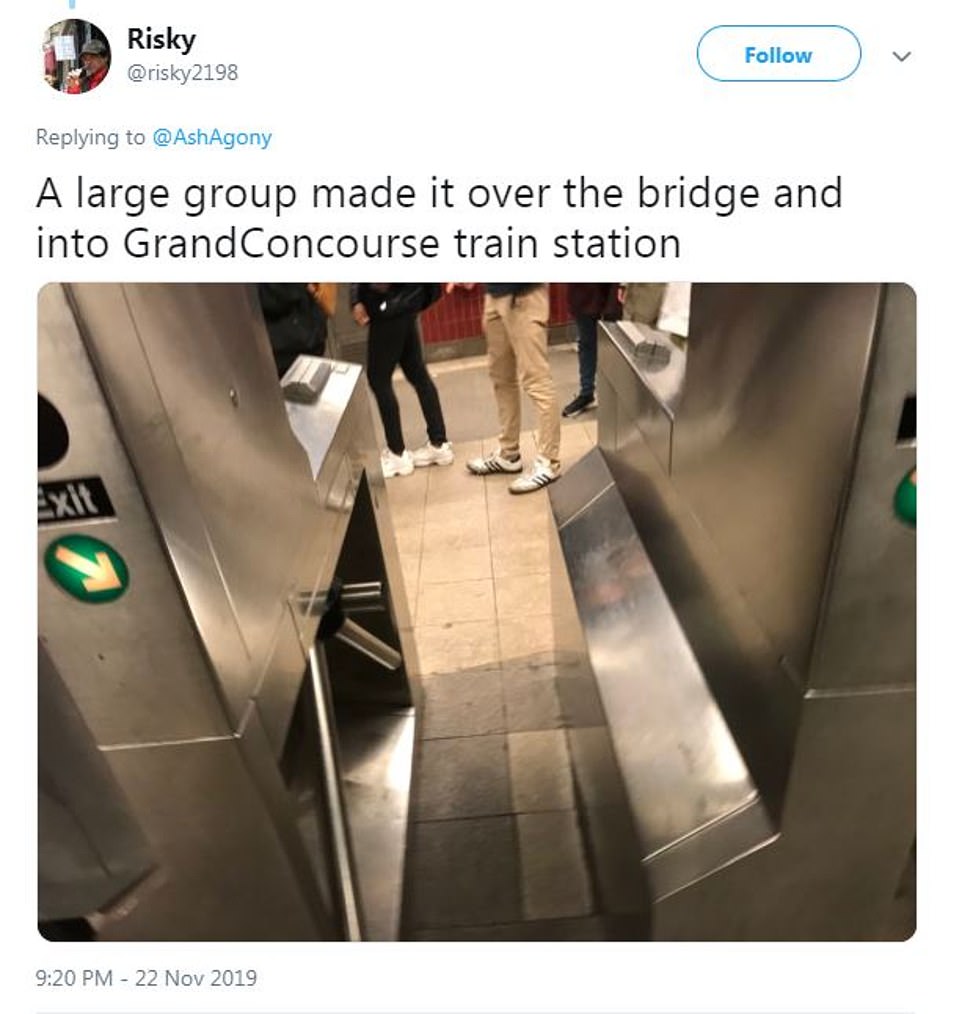 ‘F*** cops and every racist fascist person out here. These are our neighborhoods,” Alicia from the Bronx told NY Post.

Stephanie Meyer, a protester in Harlem, said: ‘I was there in Brooklyn.We have to hold the NYPD and MTA accountable.’

Meyer is referring to a previous anti-cop protest held in Brooklyn on November first.

Nearly 1,000 people took to the streets when they traveled from the area near the Barclays Center around 7pm for the movement’s first protest. 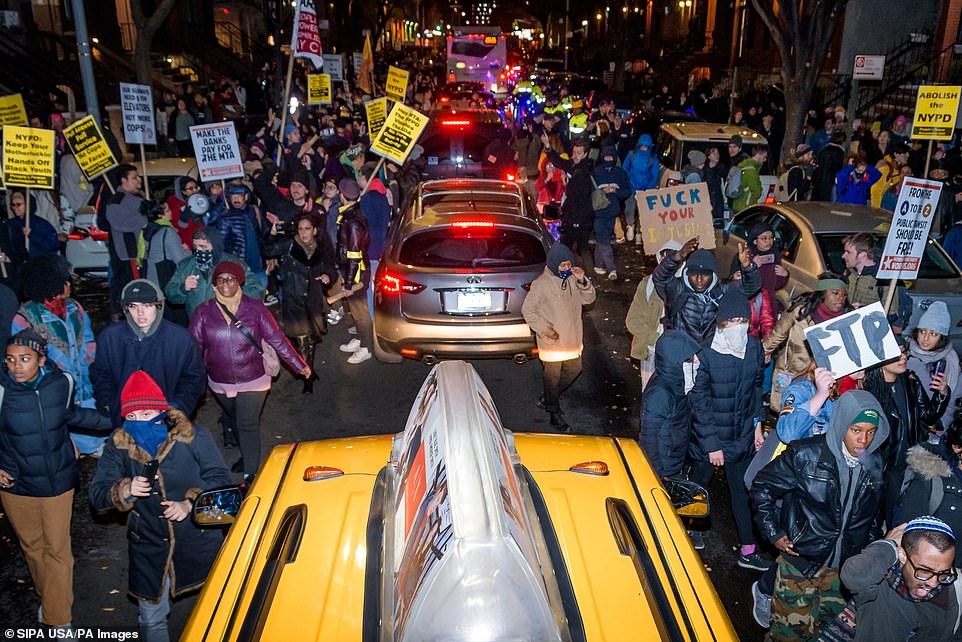 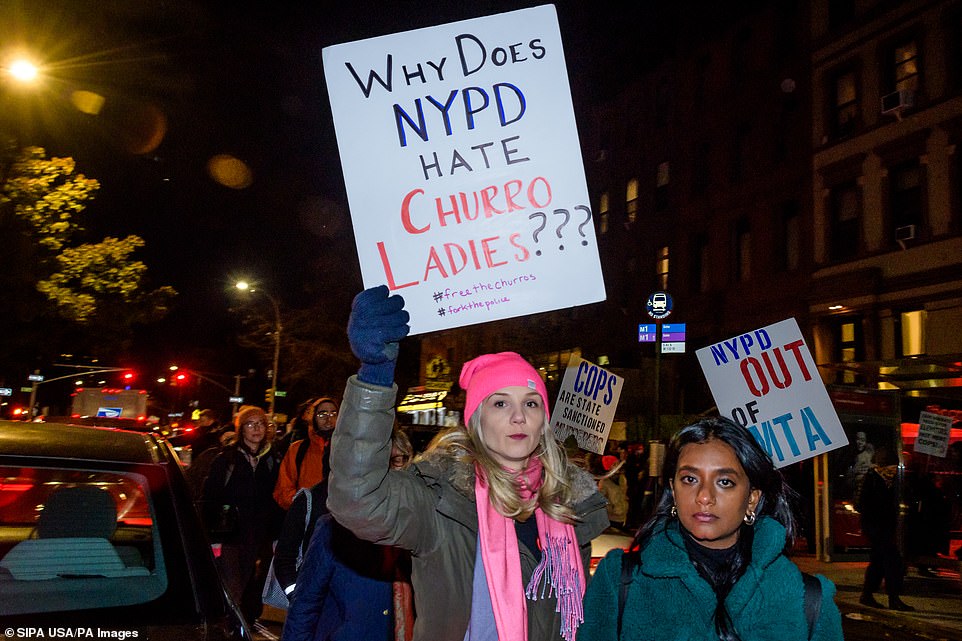 He said: ‘I love New York, but New York can never be great again under the current leadership of Governor Andrew Cuomo (the brother of Fredo), or Mayor Bill DeBlasio. Cuomo has weaponized the prosecutors to do his dirty work (and to keep him out of jams), a reason some don’t want to be…’

‘….in New York, and another reason they are leaving. Taxes and energy costs are way too high, Upstate is being allowed to die as other nearby states frack & drill for Gold (oil) while reducing taxes & creating jobs by the thousands. NYC is getting dirty & unsafe again, as….’

‘…our great police are being disrespected, even with water dumped on them, because a Mayor and Governor just don’t “have their backs.” New York’s Finest must be cherished, respected and loved. Too many prople are leaving our special New York. Great leaders would work,’ Trump said.