Copa America Centenario bosses have issued an apology after an embarrassing national anthem mix-up at Uruguay’s clash with Mexico.

Before kick-off at University of Phoenix Stadium, both teams lined up for their respective national anthems but when the time came for Uruguay’s to be played, somehow it was the anthem of rivals Chile which came out over the public address system.

It understandably left Uruguay’s players – not to mention their fans – confused at what was going on. 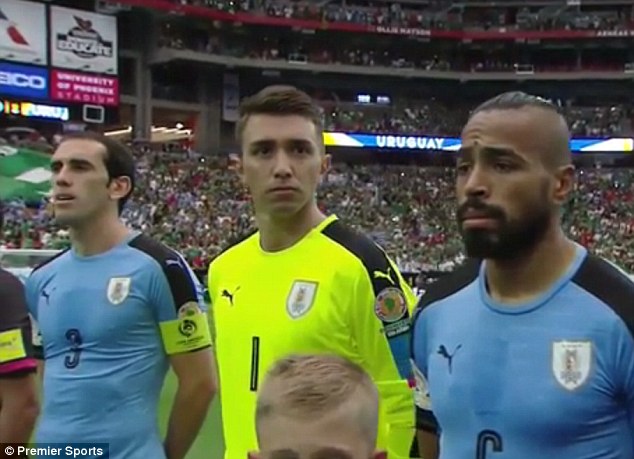 While the mistake wasn’t picked up on straight away, the mix-up soon became evident on social media with Uruguay’s players failing to sing along an obvious indication something was wrong.

The situation was an embarrassment for Copa America bosses who soon issued an apology for what went on before kick-off.

An official tournament statement read: ‘This evening during the pre-match ceremony, due to human error, we inadvertently played the incorrect national anthem.

‘We sincerely apologise to the Uruguayan Federation, the Uruguay national team, the people of Uruguay and to the fans for this mistake.

‘We will work with all parties involved to ensure such an error does not occur again.’ 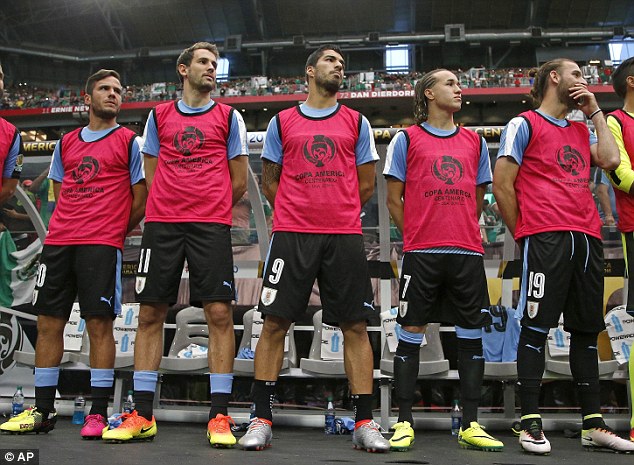 Luis Suarez (centre), who is injured, looks on in Arizona as the wrong anthem is played before the game

How exactly the Chile anthem was played instead of Uruguay’s remains a mystery. Chile aren’t scheduled to play any of their tournament matches in Arizona so in theory there should be no need for their anthem to be needed at the ground.

After the debacle over the anthems, Mexico secured a 3-1 victory once the action began in a game which saw a player from either side sent off. Uruguay’s Matias Vecino saw red, as did Mexico’s Andres Guardado.

Mexico took an early lead when Uruguay defender Alvaro Pereira scored the fastest ever own goal in Copa America history.

Atletico Madrid centre half and Uruguay skipper Diego Godin, who had comically tried to sing along to the wrong anthem pre-match, levelled things up but that wasn’t the end of the drama.

With less than five minutes to play, former Barcelona star and Mexico captain Rafael Marquez and Hector Herrera added late goals to compound a miserable day for those wearing blue. 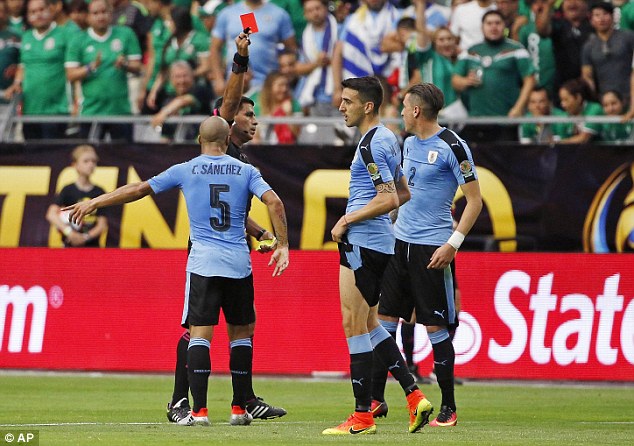 After the anthem mix-up, Uruguay went down to a last-gasp 3-1 defeat and saw Matias Vecino sent off