Cops accused of rape were at apartment for 23 minutes

The two Italian policemen who allegedly raped two American students in Florence while on duty brought the women to their home and stayed there for 23 minutes.

The CCTV confirms that the Carabinieri patrol car that was raided brought the two girls to their home and stayed there for 23 minutes. This would be a serious violation of the regulations that prohibit the transport of civilians who are not being arrested.

The two women claimed the cops attacked them inside their apartment on in the early hours of Thursday morning after they couldn’t find a taxi home from Flo nightclub.

The pair, who are studying abroad, were believed to have been involved in a fight, prompted police to arrive at the venue. After the brawl  According to Corriere della Sera, one of the cops admitted to having sex with one of the women, but insists it was consensual.

One of the suspects, a married 40-year-old father of two, reportedly told the magistrate: ‘She asked me to go to her place.’

Two American students, both 21, alleged that they were raped by Carabeinieri police when they escorted them home from the club Flo in Florence, Italy on Thursday

He also claimed he and the woman he had sex with were both sober.

Italian authorities have collected the women’s clothes and the tests they took at the hospital as potential evidence.

T he Carabinieri provincial office’s command in Florence said the two officers were notified Saturday of the suspension.

Defense Minister Roberta Pinotti said there is ‘some basis’ to the allegations, The New York Times reported.

At a women’s forum on Friday, she said: ‘Investigation is still underway, but there is some basis in respect to the allegations.’

‘Rape is always something grave. But it’s of unprecedented gravity if it is committed by Carabinieri in uniform, because citizens turns to them and to their uniform to have assurances and security.’ 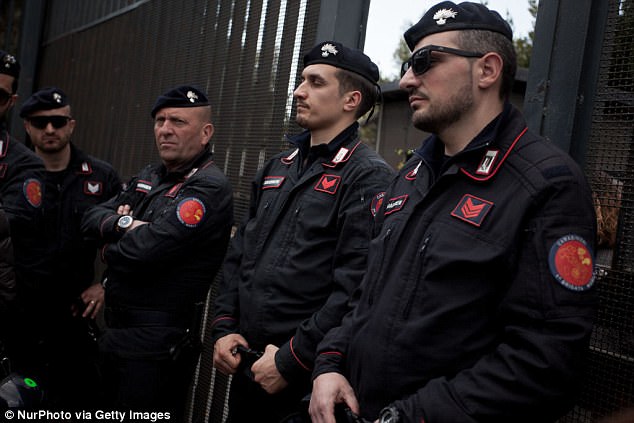 Three police cars went to Flo nightclub to investigate a fight. Two of them stayed behind and supposedly took the girls home (file picture). None of the officers in this photo are believed to have been involved in the attack

Italian news media reported that the pair told prosecutors they were drunk and had smoked marijuana that night.

Biological traces of the two suspects were discovered at the women’s apartment in the elevator and the entrance.

It stressed the suspension reflects alleged conduct while on duty and is separate from Florence prosecutors’ criminal investigation of the alleged rapes.

Investigators are awaiting DNA test results to see if they confirm the women’s account. One of the women is from Maine and the other is from New Jersey and both are studying at Lorenzo de Medici in the city center.

Besides the rape allegations, the policemen risk disciplinary charges for driving the women home without informing their superiors.

The officers, members of paramilitary police, are waiting to be questioned. 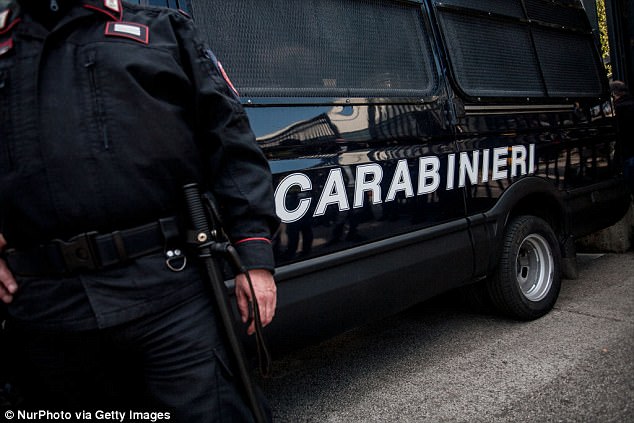 An official from the State Department said they were aware of the allegations and were taking the matter seriously.

The US Embassy in Rome said in an email: ‘Due to the sensitive nature of this case and to protect the privacy of those involved, we have no further comment.’

US Consul, Benjamin Wohlauer met both the head of police of Florence, Alberto Intini, and the Commanders of the Carabinieri. He also met the father of one of the two victims who arrived in Florence.

According to the Italian news agency ANSA, the US consul general in Florence met with Florence’s police chief Friday morning to talk about the case for about an hour.

The women had been said to be in Florence for several months studying Italian at an school in the area.

Florence has become a popular tourist destination for lots of Americans and offers plenty of study abroad opportunities for students in the States.

Florence mayor Dario Nardella said is working verify the facts of the case as soon as possible.

In January 2016, American woman Ashley Olsen was killed in her flat sparking lots of media attention.

A court in Florence convicted a Senegalese man of murdering the woman and sentenced him to 30 years in prison, later that year.

The 35-year-old had been strangled and suffered skull fractures.

Witnesses had said they’d seen the woman and her attacker meet at a Florence nightclub mere hours before she was murdered.