Hundreds of anti-lockdown protesters flocked to Melbourne’s CBD on Saturday despite Premier Dan Andrews saying the state is on the verge of a Covid catastrophe.

The ‘freedom’ rally congregated on the corner of Elizabeth and Bourke streets in the heart of Melbourne with several arrests already being carried out. 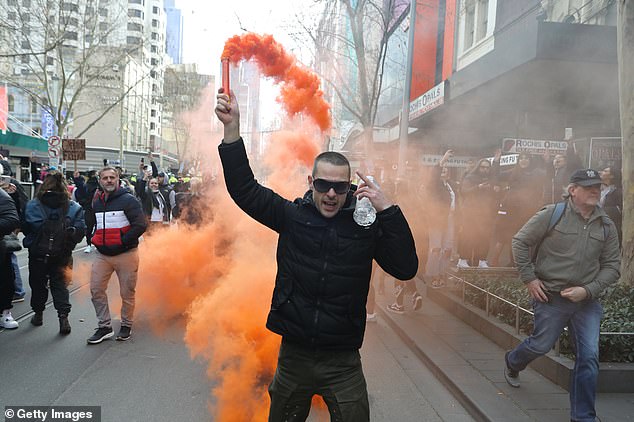 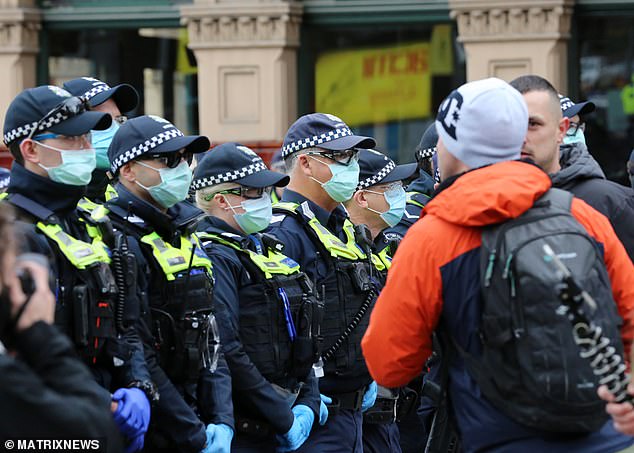 ‘We’re expecting it to be a big one,’ a Victoria Police source told the Herald Sun with hundreds expected on Saturday morning

The shameful freedom rallies on July 24 saw thousands of people across Sydney and Melbourne in anti-lockdown, anti-mask demonstrations that quickly turned violent.

Police formed a barrier on the corner of Flinders and Swanston streets where they held back the crowd chanting ‘you work for us’.

Mounted officers told the group to disperse with a number of protesters being detained.

‘Protest against this virus by staying at home, following the rules and getting out of lockdown,’ Dan Andrews said of the July protest.

Authorities are expecting similar numbers on Saturday, with a lack of organisation in the group making it nearly impossible to predict.

‘Most of them are cleanskins, mum and dad types, hardworkers who are paying tax,’ police said.

‘The bulk of the group are really people trying to find a platform for their issues.’

Anyone attending will be facing a $5,452 fine, with police urging anyone thinking about breaking the strict stay-at-home-orders to reconsider. 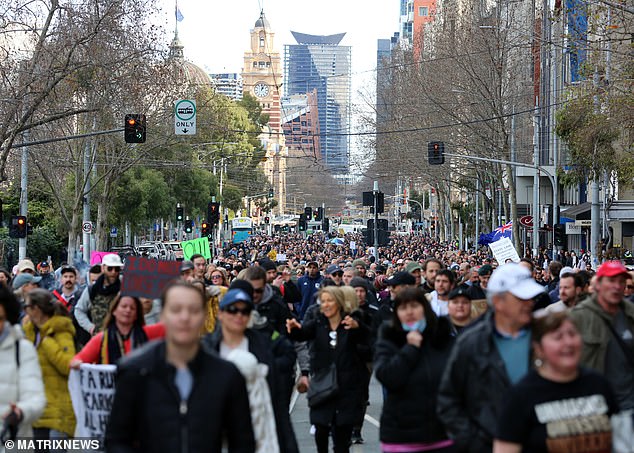 The shameful freedom rallies on July 24 saw thousands of people across Sydney and Melbourne in anti-lockdown, anti-mask demonstrations that turned violent 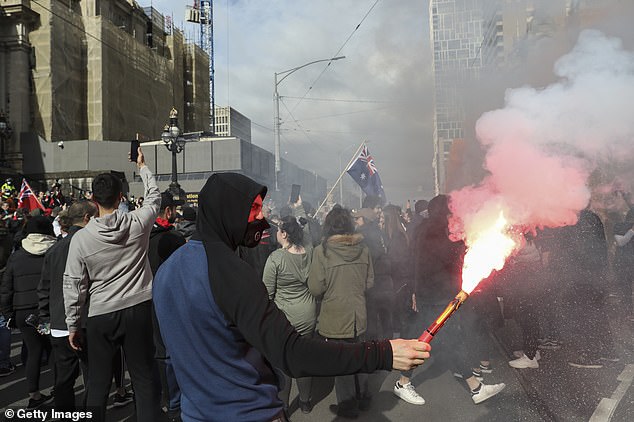 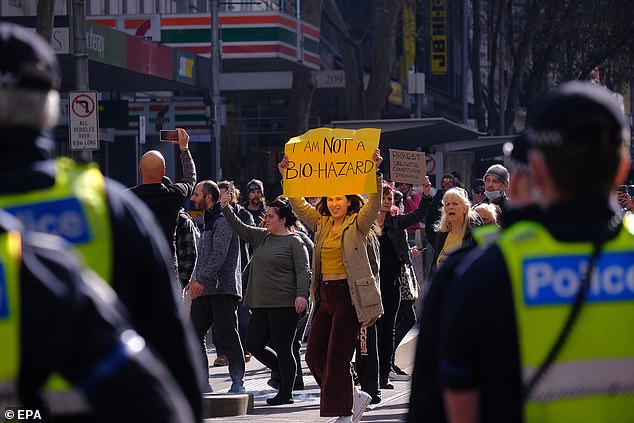 ‘Protest against this virus by staying at home, following the rules and getting out of lockdown,’ Dan Andrews said of the July protest 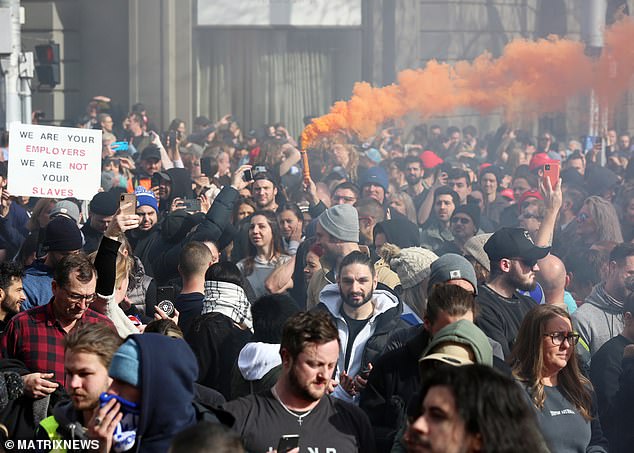 ‘Protest against this virus by staying at home, following the rules and getting out of lockdown,’ Dan Andrews said of the July protest

‘There will be a highly visible police presence in the Melbourne CBD, on the roads and across the public transport network on Saturday to ensure the community in complying with the chief health officer directions,’ Sergeant Megan Stefanec said in a statement.

‘Those who choose to blatantly disregard the CHOs directions and put the health and safety of all Victorians in jeopardy can expect to be held accountable.

‘It is very clear under the current CHO restrictions in Melbourne there are only five reasons to leave home, with a strong need to avoid public gatherings.

‘This includes activities such as public protests which are again not currently permitted.

‘The CHO restrictions also do not permit travel more than 5km from home, unless the travel is for a permitted reason.

‘Gathering in public with other people to stage a protest is not a permitted reason for leaving home.’

On Friday, Premier Andrews warned Victoria could ‘look like Sydney next weekend’ after the state recorded 55 new Covid-19 cases despite his hardline lockdown restrictions. 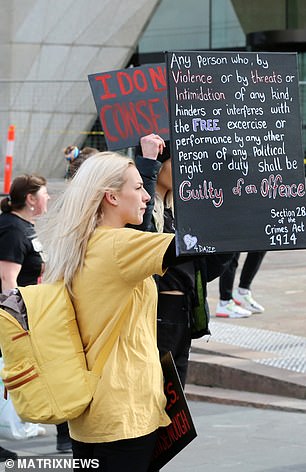 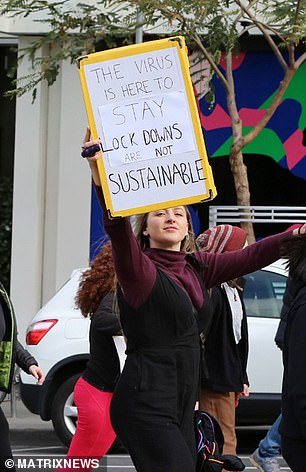 Protesters were seen in Melbourne last month holding anti-vaccination and anti-lockdown signs, including ‘I don’t consent’ and ‘Covid is a scam’ 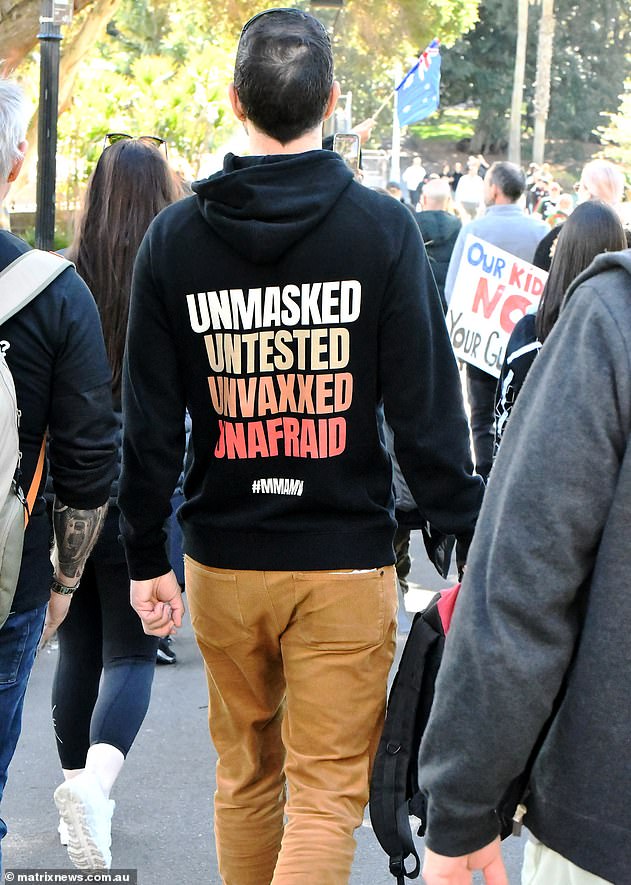 Anti-vax and proud: Some of the protesters were seen wearing ‘unvaxxed and unafraid’ jumpers

He hit back at people criticising the strictness of Victoria’s sixth lockdown, including the unpopular decision to close all children’s playgrounds in Melbourne despite widespread backlash and no conclusive evidence of Delta transmission.

‘The government is playing its part, we locked down early, we couldn’t have locked down any earlier,’ he said defiantly during Friday’s Covid briefing.

‘We went hard. I can’t be clearer with the people of Melbourne.

‘If we have a weekend this weekend like we did last weekend, then next week we’ll look like Sydney. It’s as simple as that.’

Regional Victoria is set to go back into lockdown and restrictions in Melbourne toughened even further to stop the spread of the city’s Delta outbreak, as former Premier Jeff Kennett claimed the state will stay shut down until 2022.

Mr Kennett said ‘well-placed’ food industry sources briefed on distribution disruptions by the state government warned him about the extended lockdown and tighter restrictions lasting into next year, The Herald Sun reported. 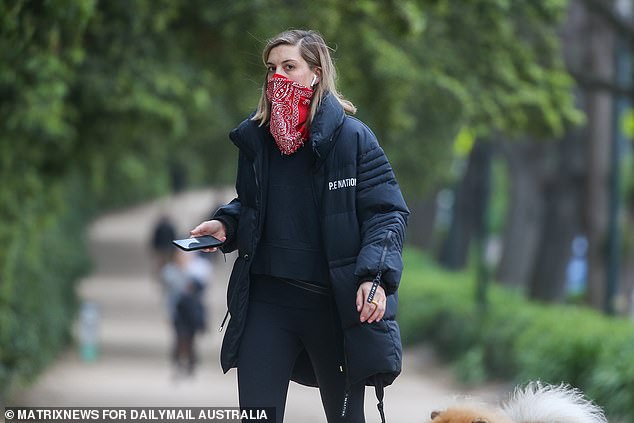 Restrictions in Melbourne are set to be tightened on Saturday, and regional Victoria put back in lockdown 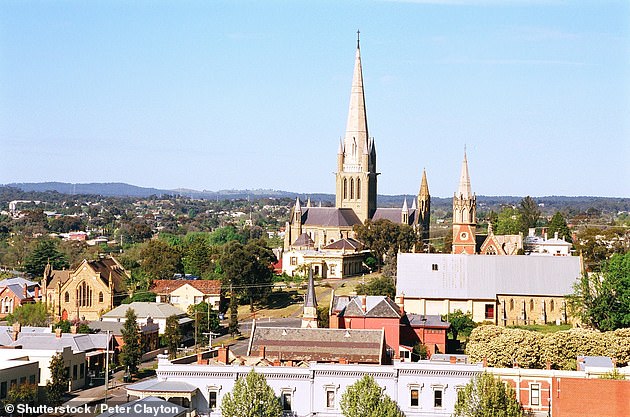 Premier Andrews held an urgent Cabinet meeting on Friday afternoon to discuss new rules which could include changes for childcare centres, tighter travel limits, shorter exercise times, a construction halt, and a ban on takeaway food and coffee.

An outbreak in Shepparton grew to 17 cases late on Friday and a new exposure site emerged at a machinery hire company in Bendigo, causing grave concerns the virus has leaked further into regional Victoria – just 11 days after lockdown was lifted for its residents.

Mr Andrews was reportedly poised to announce the regional lockdown and new restrictions immediately, until deciding to wait for overnight case numbers on Saturday morning instead.

But late on Friday evening the state government said it had told community sporting leagues in regional Victoria to ‘immediately cancel their activities for this weekend’.

‘The situation in Melbourne and across regional Victoria is extremely concerning,’ a spokesperson said.

‘Advice will be provided to government tomorrow morning and all options are on the table.’