Seattle protesters set fire to a youth detention center and a police precinct Saturday as they went on a rampage through the city and a Wall of Moms and Vets have taken to the streets to protect demonstrators from law enforcement.

Cops declared the protest a riot Saturday afternoon as firefighters fought to tackle the raging flames billowing out of a construction area near the King County Juvenile Detention Facility at 12th Avenue and Jefferson Street.

Around 2,000 descended on the city as protests that had tempered in Seattle following the dismantling of the CHOP zone earlier this month have inflamed once more, after Donald Trump said he was sending in federal troops as part of his sweeping law and order takeover in cities across the nation.

This comes after Portland suffered another violent night Friday as violent clashes broke out between the federal agents Trump drafted in and protesters calling for racial equality.

Authorities confirmed at least one person was stabbed during the escalating carnage in what marked the 58th night of unrest in the city.

Meanwhile, tensions are mounting in Chicago, with protests taking place all across the Windy City Saturday including a Back the Blue rally supporting cops, while residents brace for the force of the feds. 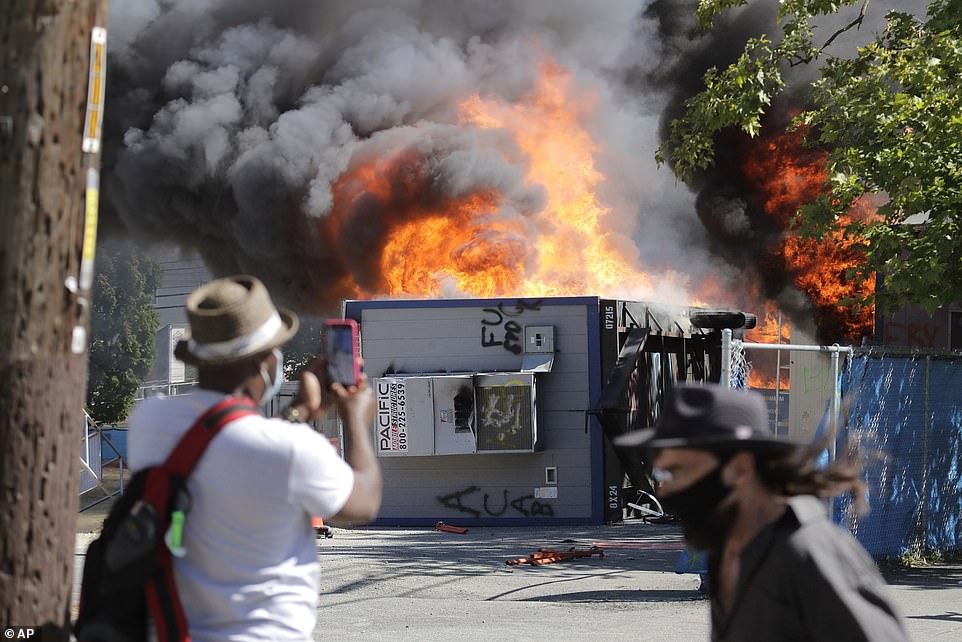 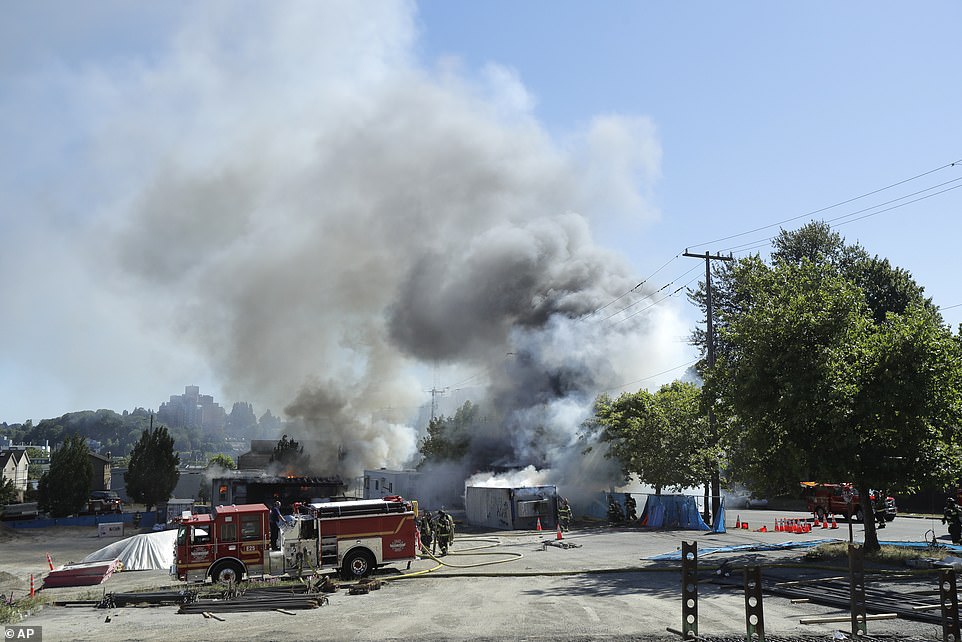 I have shifted up to Seattle today to follow a large demonstration that’s in solidarity with Portland.

I’d estimate a crowd of 2,000 already. They just torched construction buildings at the site of a new youth detention center.

Seattle police declared the protest in Seattle a ‘riot’ just before 4:30 p.m. local time Saturday as people vandalized the East Police Precinct and set a small fire inside the building.

Surveillance cameras were damaged in the onslaught, while some demonstrators tried to tear down a fence protecting the precinct.

‘Due to the ongoing damage and public safety risks associated with this incident, SPD is declaring it a riot.’

The construction site of the new King County Juvenile Detention Facility was also engulfed in flames after a group marched on the building demanding it be closed before setting fire to the area.

Law enforcement hit back at the crowds using flashbangs to get people to disperse, hours after a federal judge temporarily blocked a new law banning cops from using pepper spray and other crowd control tools.

At least 11 people were arrested by around 5 p.m. and one cop had been rushed to hospital after an explosive went off on his leg, police tweeted.

A so-called ‘Wall of Moms’ joined the protests – in solidarity with the similar ‘walls’ that have sprung up in Portland over the last week.

Mothers in Portland have come out in force every night since Saturday sporting their signature yellow t-shirts and bike helmets and forming human barricades to protect Black Lives Matter protesters from federal agents sent into the city. 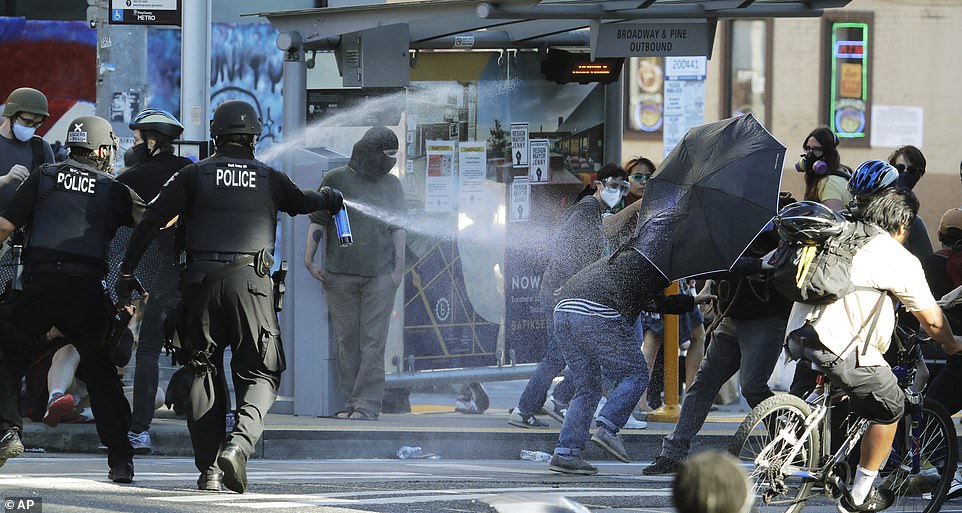 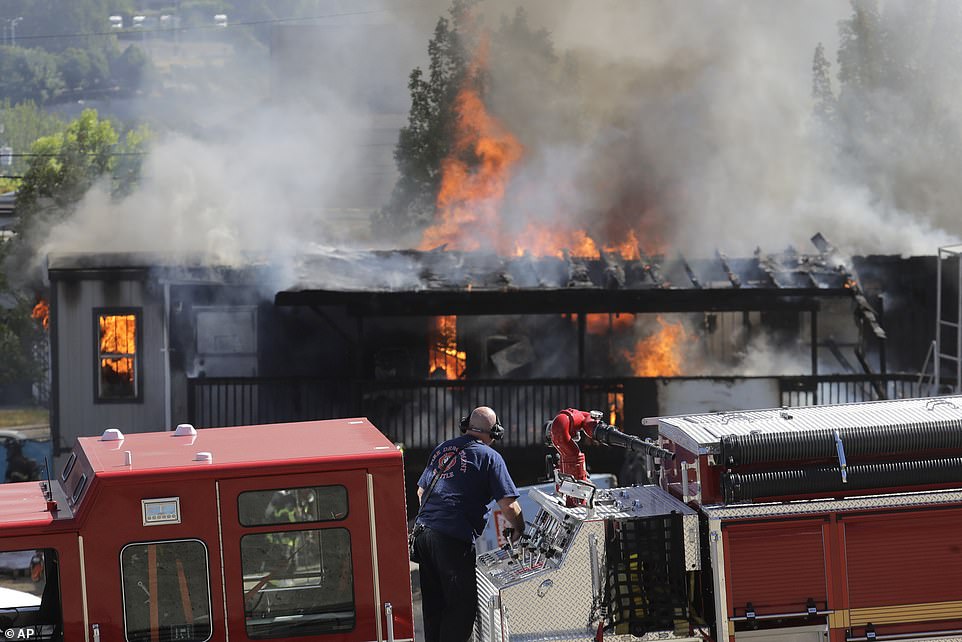 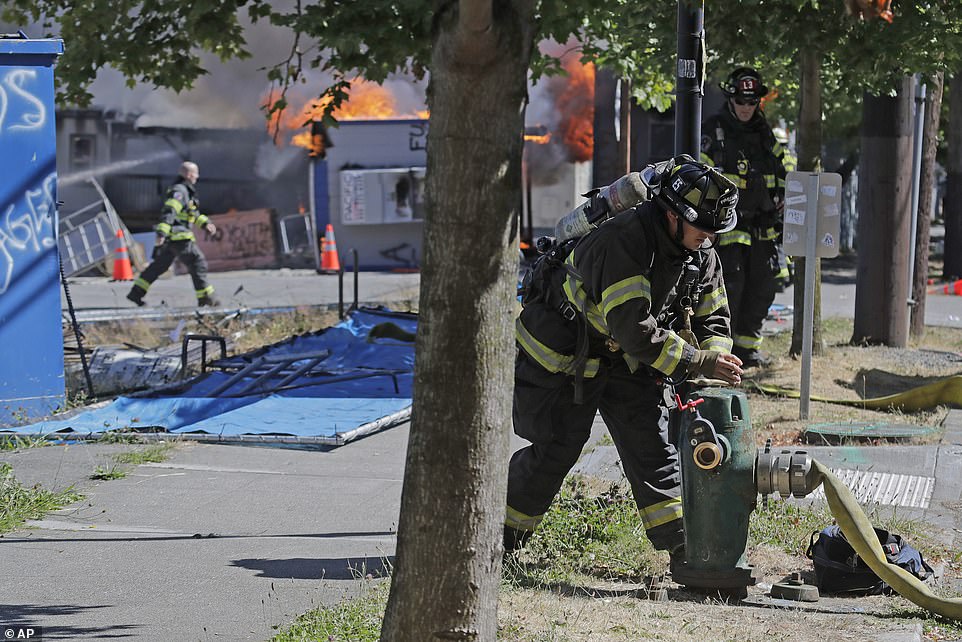 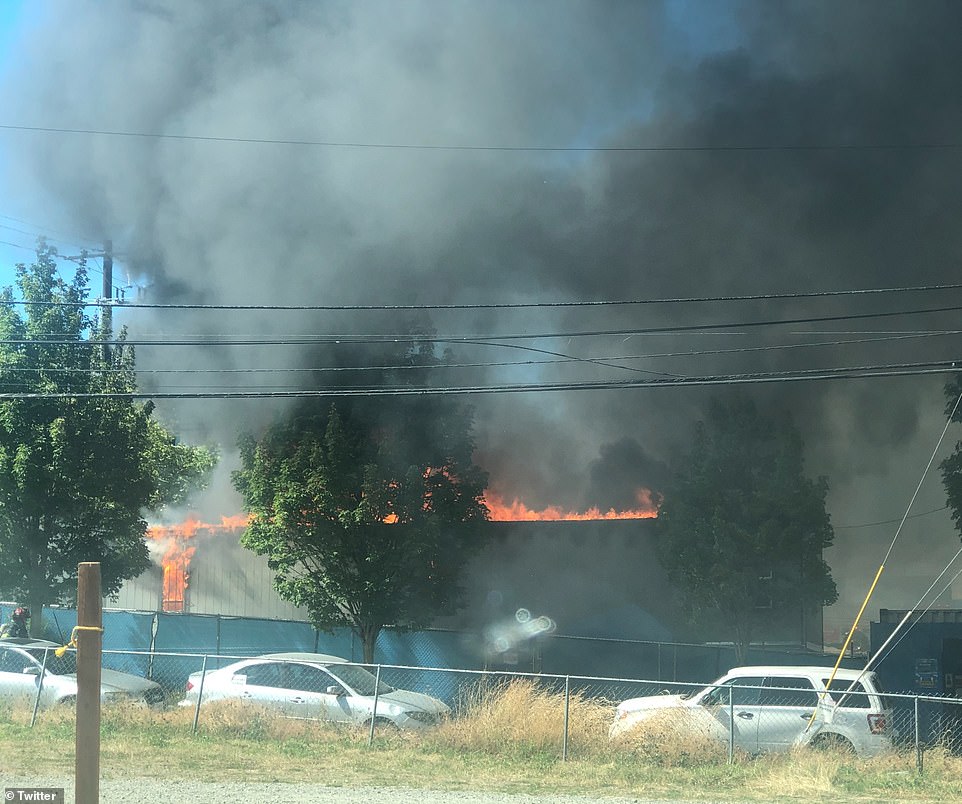 The Seattle group of women sported yellow bands reading ‘Mom’ as they marched toward the area by the detention center Saturday afternoon, while veteran protesters held up signs reading #WallofVets.

Shocking footage on Twitter showed peaceful protesters marching through the streets as explosions rang out behind them.

Several people broke out into a run before protesters appeared to realize it was cops following them with gas canisters.

Protests demanding an end to police brutality and racism have taken place in Seattle for two months now, ever since the Memorial Day ‘murder’ of black man George Floyd at the hands of a white cop.

Tensions in the city had simmered down following the removal of the CHOP zone in early July, but crowds have amassed once more to protest against the move from the Trump administration to send in federal troops. 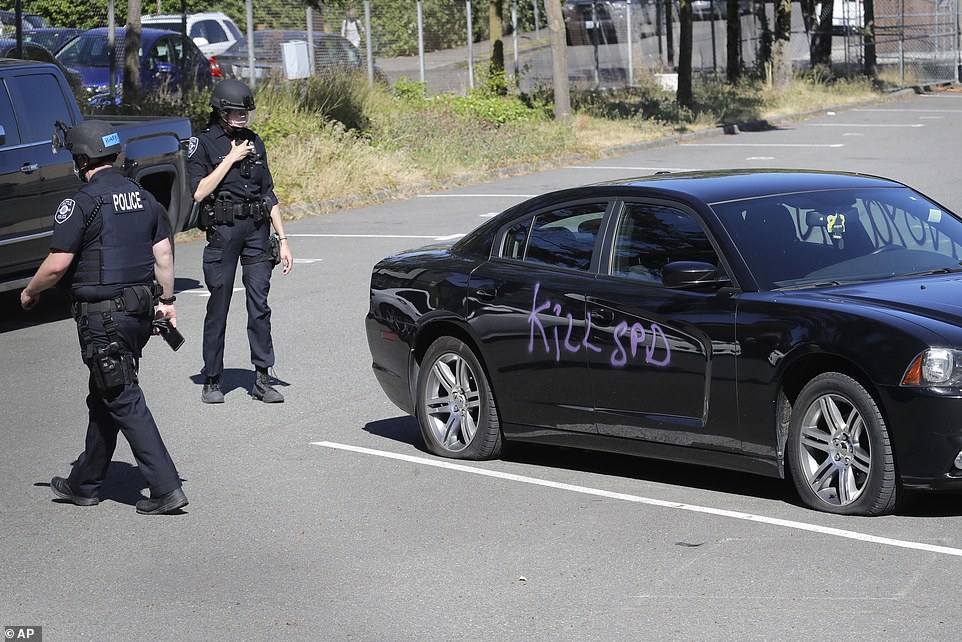 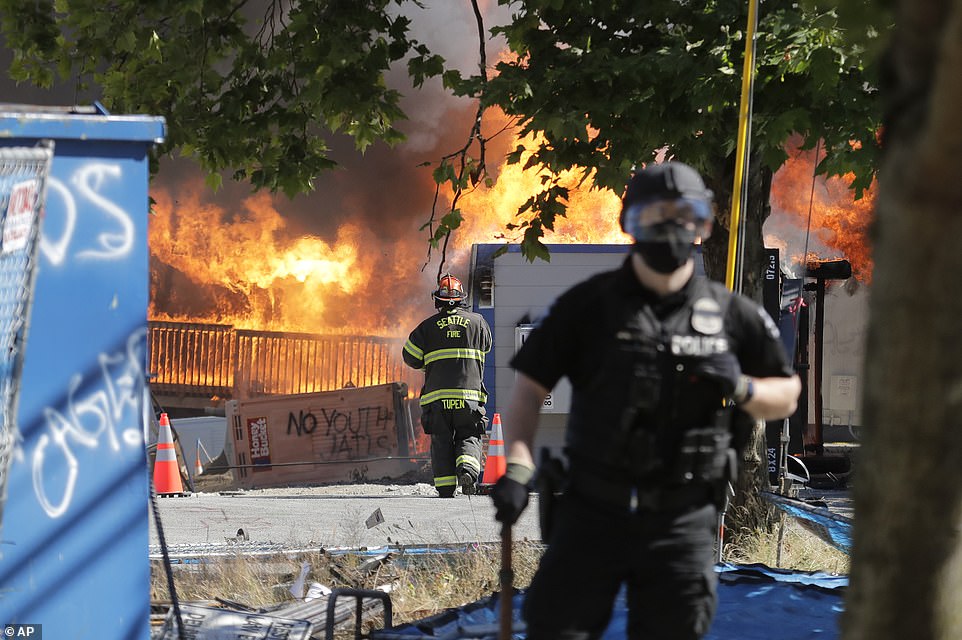 Raging flames were billowing out of the new youth detention center Saturday afternoon, as crowds of around 2,000 descended on the city and some set fire to buildings 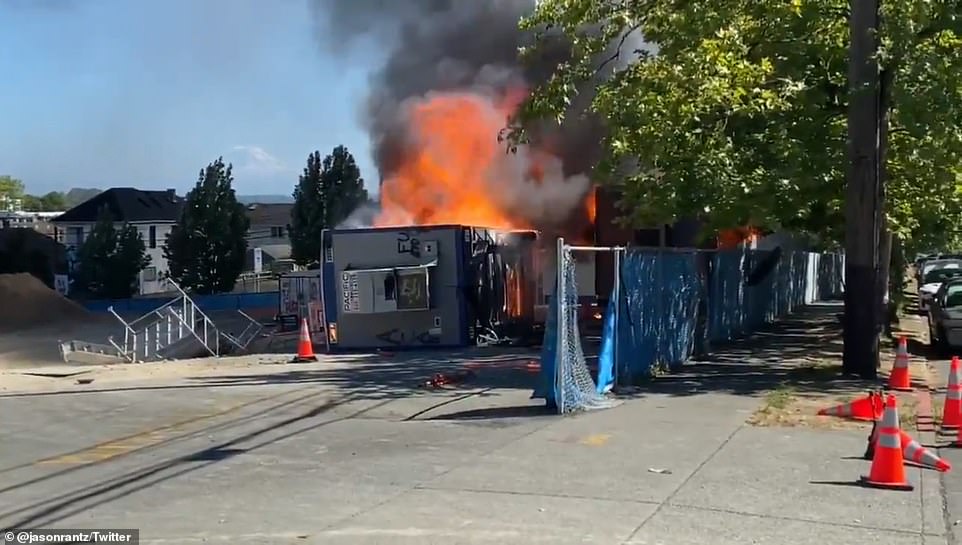 Residents and local officials including Washington Governor Jay Inslee and Seattle Mayor Jenny Durkan and Police Chief Carmen Best have voiced concerns that the city will head the way of Portland where feds have been accused of bundling protesters off in unmarked vehicles and violent clashes have erupted across the city.

They were drafted in after businesses were vandalized in the downtown area and in the nearby Capitol Hill neighborhood, they said.

But Durkan blasted Acting Secretary of Homeland Security Chad Wolf Friday saying he misled her, having assured her the government had no plans to send federal agents to Seattle. 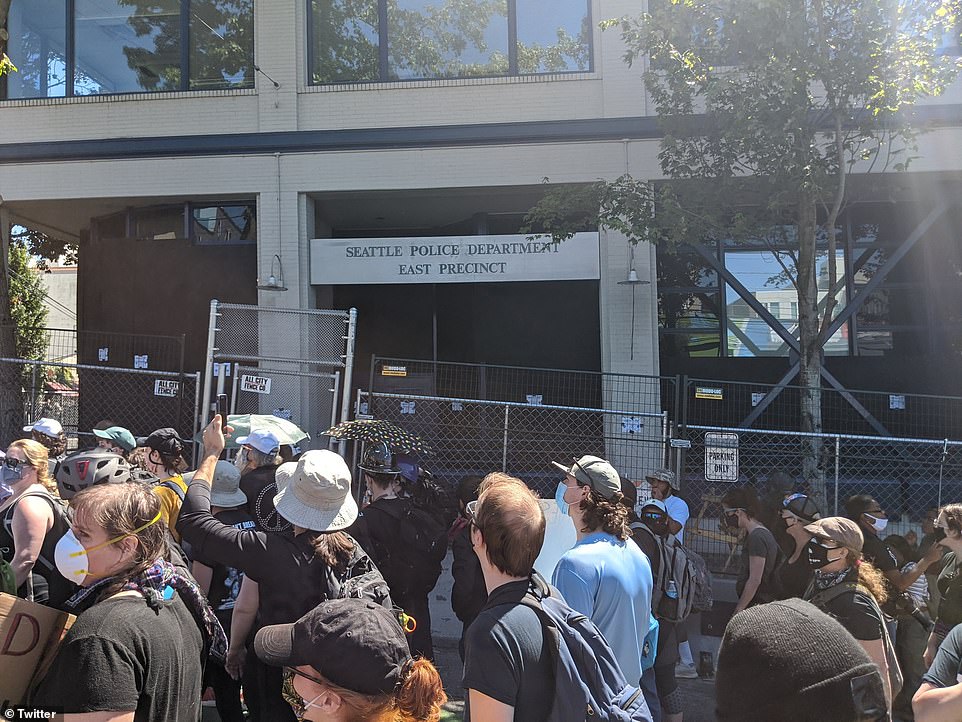 Protesters marched on the East Police Precinct. Some vandalized the precinct and set a fire inside 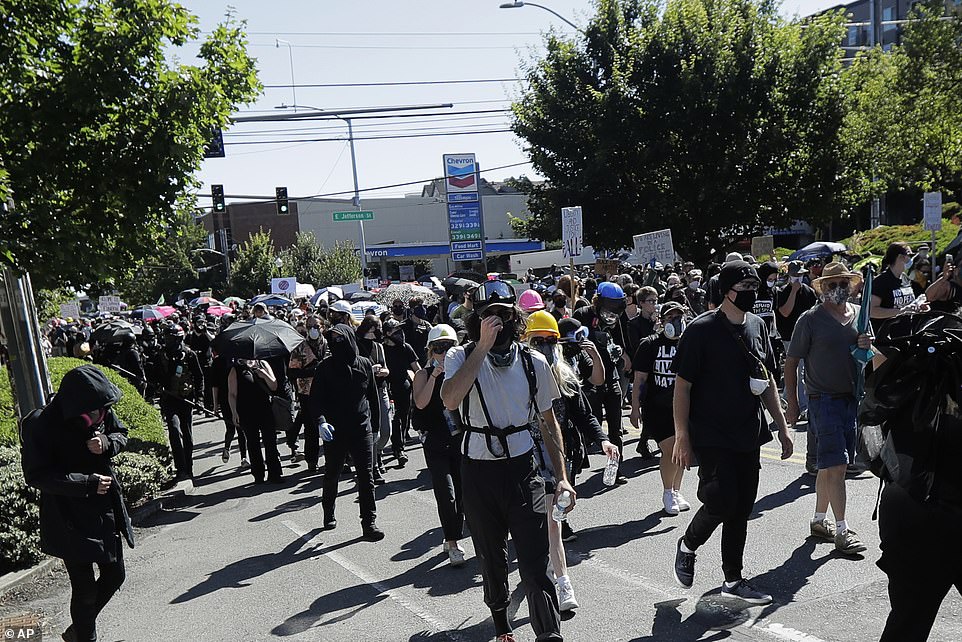 ‘I don’t want to say I was lied to, but I think there was maybe semantics that weren’t forthcoming,’ Durkan said Friday.

A federal judge dealt another blow to the city earlier Saturday ruling that cops can use pepper spray and other crowd control tools on protesters in the city.

The law, which was set to go into effect on Sunday, sparked outrage among officers, who claimed they would be unable to protect both peaceful protesters and property if demonstrations turned violent.

On Friday, Police Chief Carmen Best slammed the City Council for their new law, writing: ‘As City Council’s legislation goes into effect, it will create even more dangerous circumstances for our officers to intervene using what they have left – riot shields and riot batons.’

US District Judge James Robart granted a request from the federal government to block the new law Saturday afternoon, clearing the way for the deployment of crowd control tactics on tonight’s protests.

Federal troops have been drafted in to Portland, Chicago, Seattle and Albuquerque so far as part of the president’s controversial crackdown, with Trump warning Friday he could send agents into New York as well.

Tensions continued to boil over in Portland Friday night as a new ‘Wall of Vets’ joined the Wall of Moms and Wall of Dads to ‘protect’ Black Lives Matter protesters from the federal agents in what marked the 58th night of unrest in the city.

Police said one person was stabbed in downtown Portland early Saturday morning and a suspect was taken into custody, as scenes turned ugly overnight.

The ‘Wall of Vets’ group appeared at the demonstration for the first time, alongside the yellow-clad ‘Wall of Moms’ who have gathered every night this week.