An anti-racism protest in Tempe, Arizona, turned chaotic on Monday night when police began firing tear gas into a crowd as several cities around the US saw their 61st consecutive night of unrest.

The Tempe demonstration began peacefully at about 5pm as roughly 200 people gathered in Tempe Beach Park to show support for the Black Lives Matter movement.

Protesters then began marching through the streets and ultimately blocked traffic on Scottsdale Road, prompting Tempe Police to declare the gathering unlawful.

After the crowd ignored orders to disperse, police deployed tear gas at the protesters, who responded by launching projectiles and shouting profanities as they moved toward a line of officers on bicycles.

Meanwhile in Portland, the so-called ‘Wall of Moms’ activist group took to the streets yet again to demand that federal agents leave the city following a weekend of violent clashes outside the city’s courthouse.

And in Austin, Texas, where a protester was shot dead on Saturday, hundreds of people marched to the police headquarters to demand justice.

TEMPE, ARIZONA: Police fired tear gas into a crowd of protesters and threatened to make arrests as an anti-racism demonstration turned chaotic on Monday night in Tempe 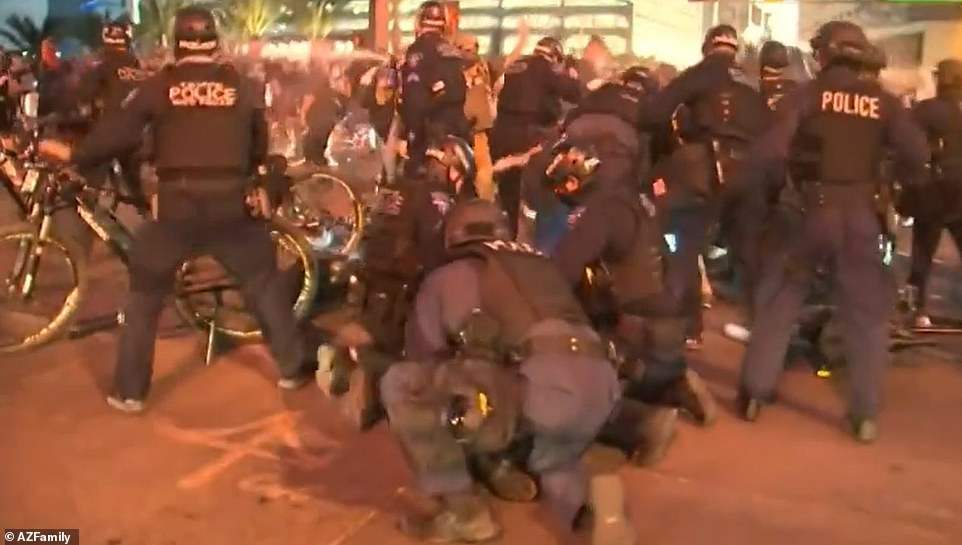 TEMPE, ARIZONA: Protesters were seen hurling projectiles at officers ordering them to clear the road in Tempe on Monday 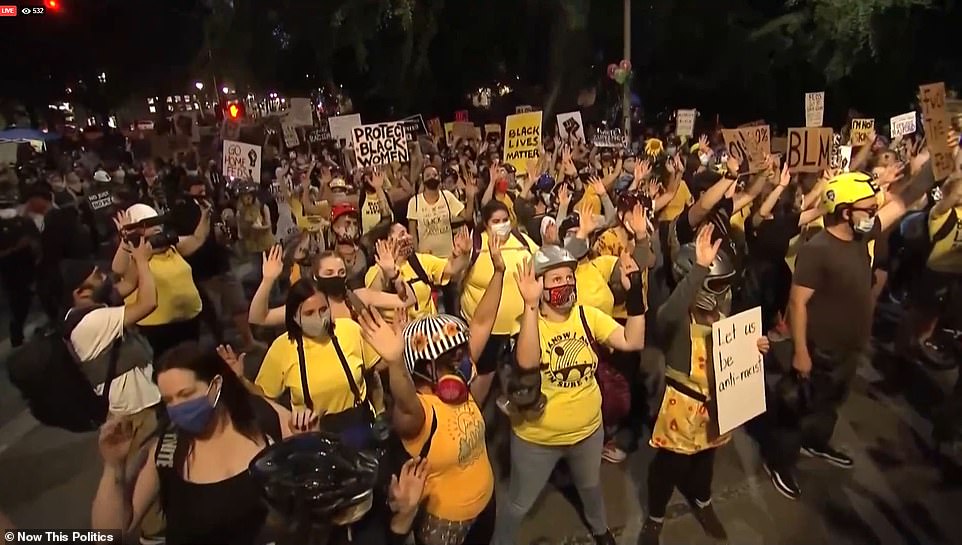 PORTLAND, OREGON: The so-called ‘Wall of Moms’ activist group took to the streets of Portland yet again on Monday night to demand that federal agents leave the city following a weekend of violent clashes outside the city’s courthouse 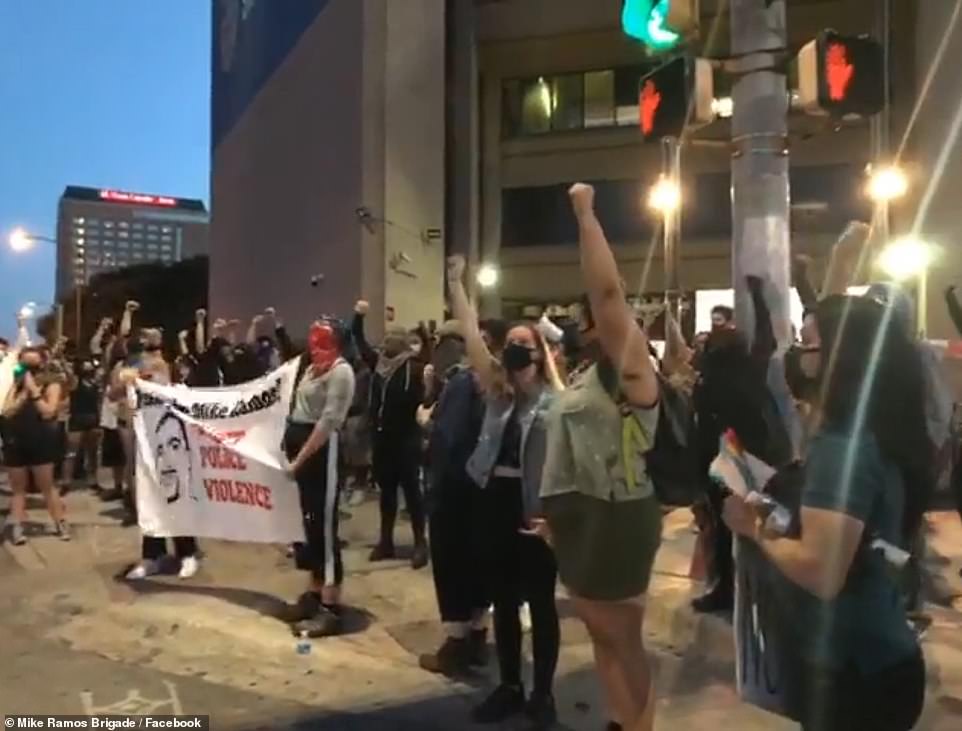 AUSTIN, TEXAS: In Austin, where a protester was shot dead on Saturday, hundreds of people marched to the police headquarters on Monday night to demand justice

Tempe Police Chief Sylvia Moir tweeted about the confrontation between police and protesters just after 8pm local time, writing: ‘It is unacceptable to hurl projectiles at people — cops are people there to protect free expression and provide public safety. When you throw objects at them, that is NOT OK.’

AZFamily.com reported that two to four protesters had been arrested as of 9pm.

Video recorded by the outlet showed officers tackling one protester.

A Tempe police spokesperson declined to comment specifically about the events, saying: ‘This is a fluid and active scene. We will continue to monitor the situation, and address issues if and when needed. At this time, no further information is available.’

The protest that preceded the clash was organized in honor of Dalvin Hollins and Dion Johnson, two black men who were shot and killed by police in metro Phoenix.

Monday marked the fourth anniversary of when 19-year-old Hollins was fatally shot by Tempe police responding to a call about a suspected robbery at a Walgreens in 2016.

It was also the day before what would have the 29th birthday of Johnson, who was shot and killed by Arizona State Trooper George Cervantes on May 25, 2020.

The protesters marched to the Mill Avenue bridge, where they kneeled in the road and sang ‘Happy Birthday’ to Johnson.

They also hung a large banner on the bridge with the words: ‘End qualified immunity’ – referencing the legal doctrine that protects law enforcement and other officials from being sued for official actions.

The organizers of the demonstration – Tempe Against Police Violence, Black Lives Matter Phoenix-Metro, Direct Action Arizona and Young Democratic Socialists of America – demanded that the state Department of Public Safety release the names of all officers involved in Johnson’s death.

They also called for an end to qualified immunity for officers and to terminate officers who are part of wrongful deaths or use of force violations.

‘We’re sick and tired of our folks, our brothers and sisters being killed by the racist police departments,’ organizer Darien Barrett of Tempe Against Police Violence told AZFamily.com. 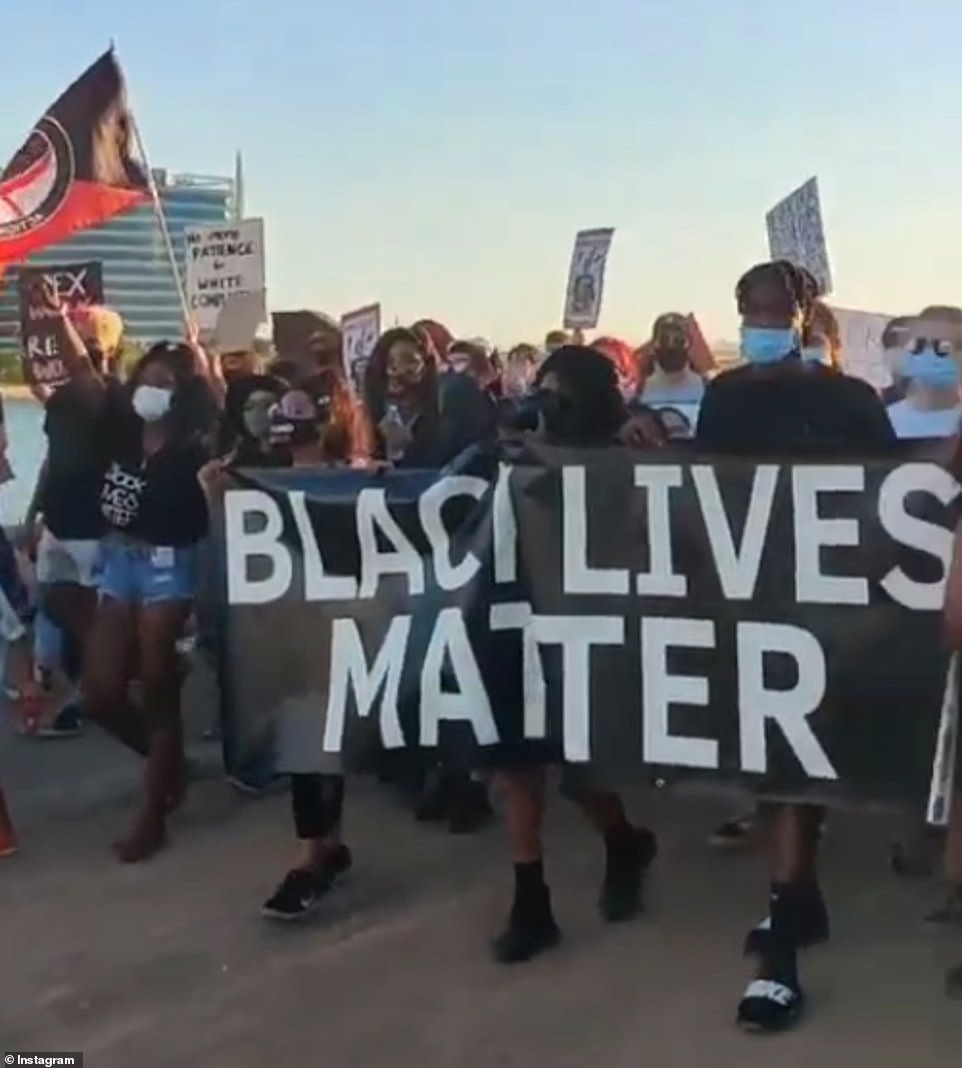 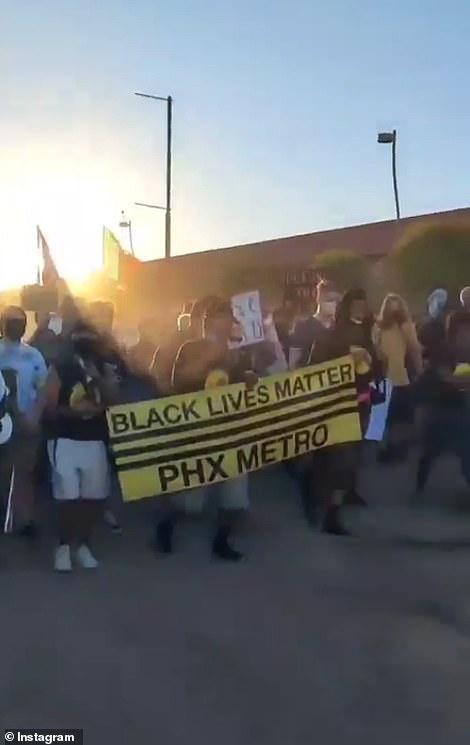 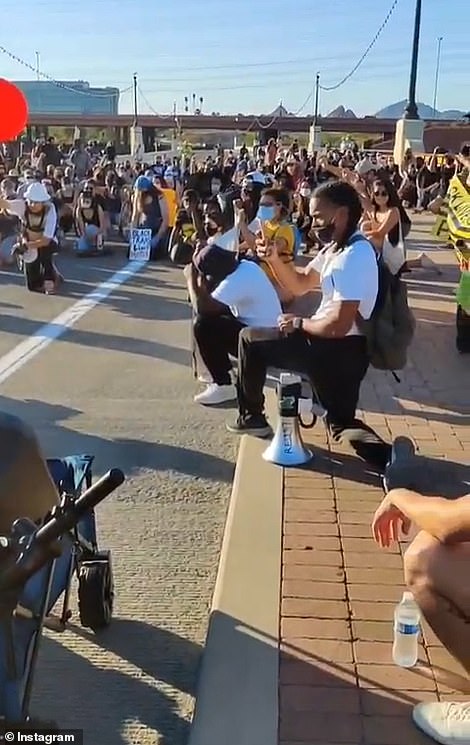 TEMPE, ARIZONA: After gathering in the park the protesters made their way to the Mill Avenue bridge, where they kneeled in the road and sang ‘Happy Birthday’ to Dion Johnson, who was shot and killed by an Arizona state trooper on May 25 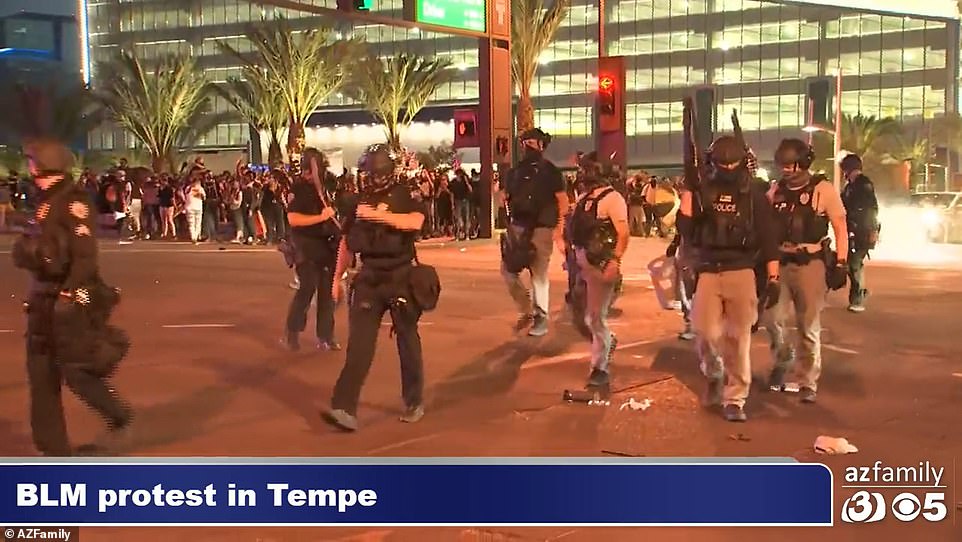 TEMPE ARIZONA: At about 8pm Tempe Police declared the protest unlawful as crowds refused to clear the road

Monday marked the 61st night of nationwide protests against racism and police brutality sparked the death of George Floyd, a black man who died after a white Minneapolis cop kneeled on his neck on May 25.

A large protest formed in Portland, Oregon, where clashes between demonstrators and federal agents intensified over the weekend outside the city’s Mark O. Hatfield federal courthouse.

Scenes from Monday evening were significantly calmer than preceding nights – though many feared violence could erupt later on.

Portland’s ‘Wall of Moms’ activist group turned out once again, albeit in smaller numbers than they had last week.

Another demonstration was held in Austin, Texas, where a protester was shot dead over the weekend after a car drove into the crowd.

A few dozen people set up outside the Austin Police Department headquarters and chanted at a line of officers stationed outside for a few minutes before the officers retreated into the building. 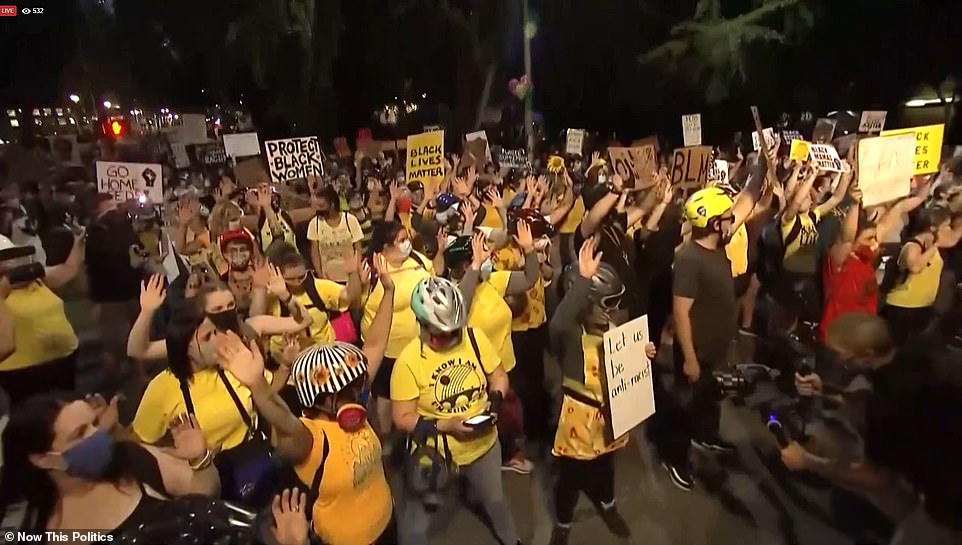 PORTLAND, OREGON: A large protest formed in Portland, Oregon, where clashes between demonstrators and federal agents intensified over the weekend outside the city’s Mark O. Hatfield federal courthouse