An autopsy report released Wednesday by a medical examiner in Argentina revealed that a man died of suffocation after a police officer knelt on his neck while trying to arrest him.

Walter Ceferino Nadal was accused of stealing a hat by a supermarket employee June 24 in the northwestern city of San Miguel de Tucumán.

Officer Jessica Gómez, who was near the store, requested backup after learning about the alleged incident. She chased after the 43-year-old man before she was joined by five other cops, including two who were able to bring him down to the ground before he died moments later in an ambulance.

The lead prosecutor in the case, Adriana Giannoni, ordered an autopsy after the original police report indicated Nadal died of a heart attack.

None of the six police officers involved have been suspended or arrested.

Walter Ceferino Nadal died June 24 after a police officer in San Miguel de Tucumán knelt on his neck while trying to arrest him after he was accused of stealing a hat from a supermarket and leading cops on a foot chase. An autopsy report released Wednesday showed that he died of suffocation and not a heart attack as indicated in a police report 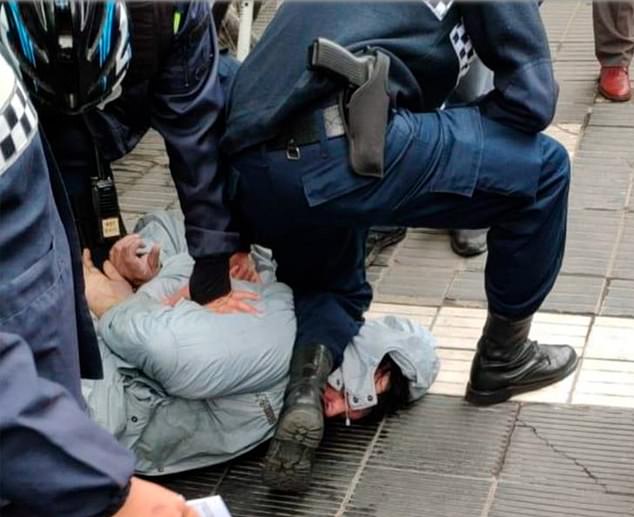 Josué Molina knelt on Walter Ceferino Nadal while he and other cops tried to restrain him. None of the police officers involved have been suspended, arrested or charged with Nadal’s death

A video shows several agents attempting to restrain Nadal, who several times clearly tells the police officers, ‘I don’t have anything. Check me.’

Nadal, a father-of-five who was awaiting the birth of another child with his girlfriend, asked the cops to return his cellphone during the struggle as he was pinned face down against the sidewalk pavement.

News outlets in Argentina reported that as Officer Josué Molina subdued Nadal by kneeling on his neck, a witness at the seen overheard Nadal say, ‘I am lacking air, I am lacking air.’

It was reminiscent of the May 25 incident in Minnesota in which George Floyd, a Black man, repeatedly said, ‘I can’t breath,’ while Derek Chauvin, a white cop, knelt on the 46-year-old’s neck for almost eight minutes after he was nabbed for allegedly using a fake $20 bill at a store.

‘I was walking around the place and I came across that scene. It was all very violent. I did not understand anything,’ the witness told local media outlets. ‘I caught a glimpse of the bigger policeman rushing in and putting his knee to his neck. In a moment the man was silent and turned white.’ 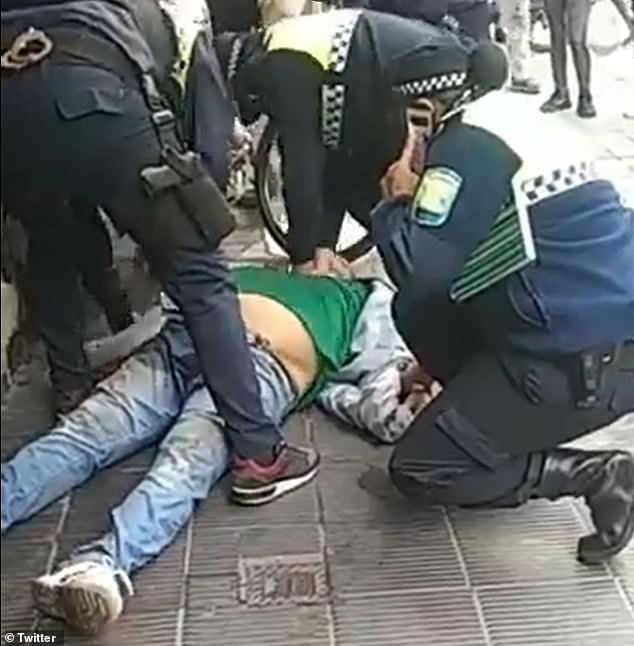 A police officer performs CPR on Walter Ceferino Nadal moments before he died in an ambulance as he was being rushed to Padilla Hospital in San Miguel de Tucumán, Argentina, on June 24. None of the cops who are part of the investigation have been suspended or arrested 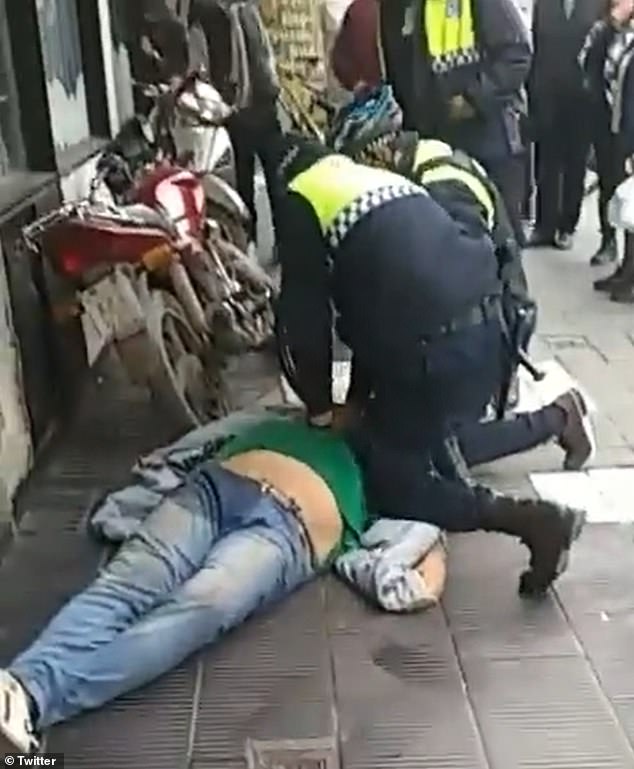 A cop provides medical assistance to Walter Ceferino Nadal after he led the police on a foot chase in Argentina on June 24 after he was accused by a supermarket worker of stealing a hat. Nadal, a 43-year-old father of five who was expecting the birth of a child with his pregnant girlfriend, died of suffocation after a cop knelt on his neck

A separate video shows one of the police officers applying CPR to an unconscious Nadal, who died in the ambulance as he was rushed to Padilla Hospital.

Nadal suffered fractures to the sternum and five fractured ribs as a result of the resuscitation maneuvers.

Argentine news outlet Cronica reported that Giannoni has scheduled a meeting with medical experts for August 13 to review the new findings.

Two of the cops involved in the investigation surrounding Nadal’s death are set to meet with Giannoni on August 7 to provide testimony.