Four cops have come under fire after posing for a photo with a smiling, shirtless and handcuffed bank robbery suspect following a massive manhunt in Mississippi.

The photo emerged a day after Eric Boykin was arrested on Tuesday for allegedly holding up a Hancock Bank in the small town of Prentiss and fleeing the scene.

Multiple federal and state law enforcement agencies including the FBI and ATF joined the search before Boykin was found in a wooded area about 600 yards from the bank, according to WLBT.

The outlet published the photo of Boykin – who’s smiling – flanked by four armed officers and three police dogs. Two of the officers flashed grins, including one of the officers who has his hand on Boykin’s shoulder.

The image immediately sparked backlash on social media as critics slammed the officers for turning the serious ordeal into a photo-op that resembled hunters posing with an animal trophy.

Four cops have come under fire after posing for a photo (above) with smiling, shirtless and handcuffed bank robbery suspect Eric Boykin following a massive manhunt in Mississippi 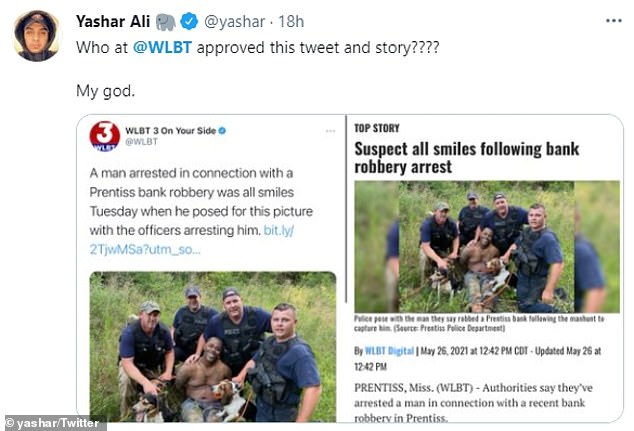 It remains unclear which agency the officers belonged to. Prentiss Police Investigator Richard Browning confirmed to DailyMail.com that the officers were not part of his department and speculated that they may have come in from Louisiana to join the search.

‘I didn’t even know about the photo until reporters started calling me,’ Browning told DailyMail.com. ‘It’s unfortunate. I agree that it’s in poor taste.’

The only Louisiana law enforcement agency to known to have been involved in the search was a Louisiana State Prison System K9 team, according to WLBT. DailyMail.com left a message looking for comment.

Critics sounding off on Twitter slammed the officers for dehumanizing Boykin by proudly posing next to him after he was captured.

Josie Duffy Rice, a criminal justice system reporter and president of the ‘Appeal’ tweeted, ‘So either 1) none of the people involved, from the officers to the news station to the staffer who posted this, realized what a bad look this is or 2) they do know how it looks, and that’s why they posted it. Those are the only two possibilities! and they are both very very bad.’

‘This picture has a very unsettling “big game hunt” vibe. Like, how did it come about? “Hey guys, gather ’round so we can remember this moment, bring the dogs!” I hope I’m wrong,’ another Twitter user said.

‘Omg. The cops look like they are posing with a lion or deer they shot. This is f***ked up,’ a Twitter user said.

‘And who would be considered the “animal” in this “big game” hunt? And is there are a history of dehumanizing and likening black people to animals? if that is the mindset of these officers – taking a picture of their “trophy,” then it is most certainly about race,’ a Twitter user said in a long list of response to Rice’s tweet. 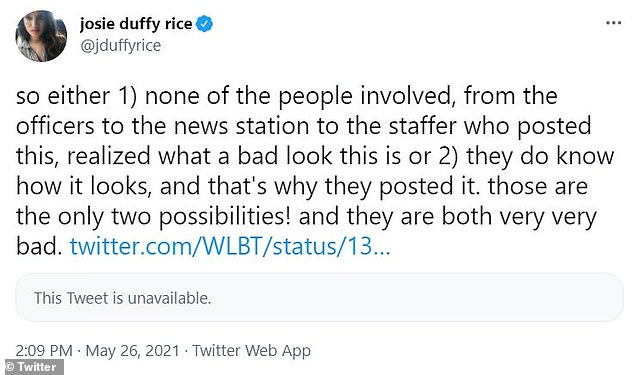 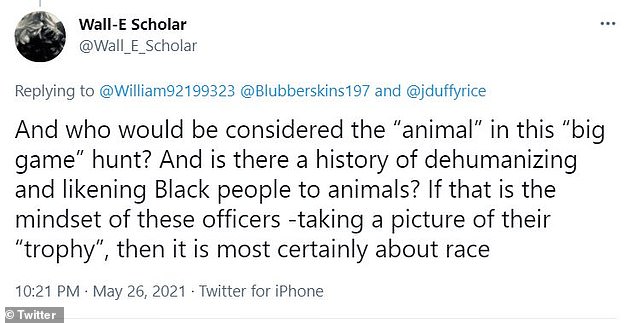 Some of Twitter’s wrath was directed at the news station who ran the photo, which is still attached to their story about the arrest but has since been deleted off Twitter.

WLBT News Director Mark Little declined comment Thursday morning but said the news outlet followed protocols to secure the photo from a source and he said. ‘more information could be coming out today’ but didn’t elaborate.

Thursday morning WLBT added this at the bottom of the story:

‘WLBT has asked multiple agencies for the identity of the officers pictured and whether a department’s normal procedure is to take pictures like this at the end of a search operation. At this point, the routine procedure and identities of the officers are unknown. We’ll continue asking those questions and make updates available.’

Originally, WLBT sourced the photo to the Prentiss Police Department then changed to ‘Special to WLBT’.

‘If I were running a news station’s social media, I would simply not post pictures that look like human trophy hunts for clicks,’ someone on Twitter said.

Another Twitter users said simply, ‘Um, no one at the news station thought this through?