One of Jeremy Corbyn’s closest allies claims that British governments have enforced power like the Nazis did, the Daily Mail can reveal.

He likened this to the Nazi policy of seizing power by forcing all institutions to toe the same line, called ‘Gleichschaltung’. 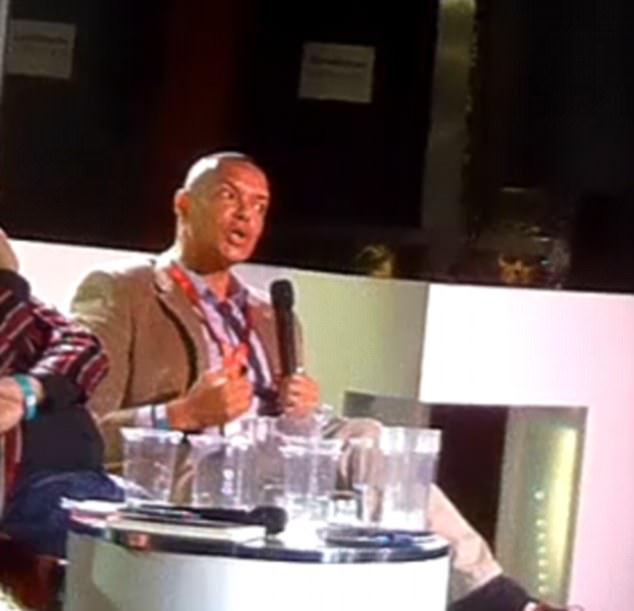 He likened this to the Nazi policy of seizing power by forcing all institutions to toe the same line, called ‘Gleichschaltung’

Speaking in Brighton as Labour held its conference this week, Mr Lewis took aim at ‘neo-liberalism’ – a term for free-market economics used pejoratively by the Left.

At an event run by pro-Corbyn group Momentum, he said: ‘One of the things that neo-liberalism has done, it has undermined [the BBC and the NHS], systematically undermined them.

‘The Germans – the Nazis – actually developed a word for it. It’s called Gleichschaltung. Basically, the Nazis understood that when they came into power, it wasn’t just about decree, they also had to undermine those civil and democratic institutions.’

The former Labour business spokesman said he was ‘not comparing the Conservative government to the Nazis’, but added: ‘What I am saying is there is a theme running through neo-liberal approaches to democratic institutions.’ 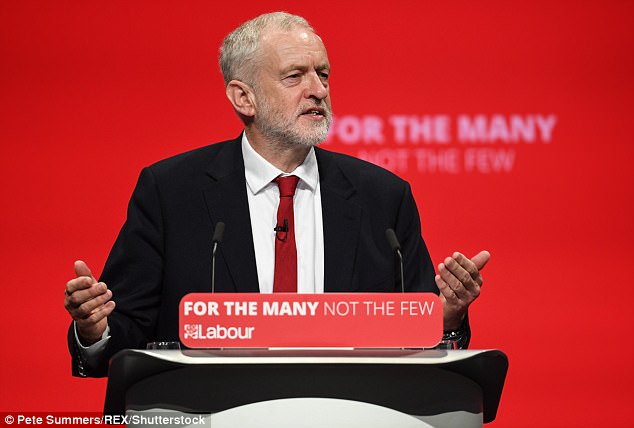 Another speaker called for the monarchy to be abolished and ‘bad laws’ to be broken. Last night Tory MPs said Mr Lewis’s comments were little more than hate speech. 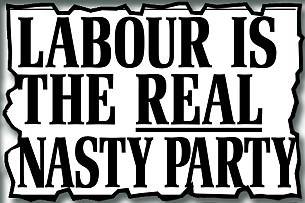 It comes as Labour was branded the ‘new nasty party’. At the Brighton conference, a speaker at a fringe event said they should be able to question whether the Holocaust took place. Another delegate called for the party’s Jewish wing to be kicked out for backing the ‘apartheid’ state of Israel. And Kensington MP Emma Dent Coad sparked fury by mocking Prince Harry’s military record. 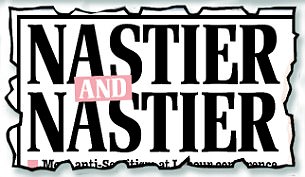 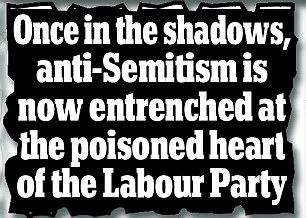 The equality watchdog called on Mr Corbyn to ‘root out’ anti-Semitism and told Labour it had to do more to prove it was not a racist party. Alongside the party conference in Brighton, Momentum put on a festival for activists which was called The World Transformed. Mr Lewis organised a debate titled ‘radical democracy and 21st-century socialism’, joining the Momentum chairman Jon Lansman on a panel last Sunday.

He said public institutions such as the BBC and the NHS were ‘really big’ elements of a healthy democracy, but these had been under attack from neo-liberalism. He compared this with Gleichschaltung – literally translated as ‘synchronisation’ or ‘co-ordination’. The term was used by the Nazi Party for its policy of eliminating all opposition within the state’s political, economic, and cultural institutions.

Mr Lewis, who was previously a Labour defence spokesman, said: ‘They developed a word which was basically to undermine and hollow them out till they’re either pointless or irrelevant.

The MP also claimed that Labour had inspired the Left in Israel. Even though almost one in four voters in Israel support Left-wing parties – including its own ‘Labor Party’ – Mr Lewis said: ‘I was in Palestine last week and I met some Leftists in Israel. They were hard to find and track down but we did find them eventually.’

The Nazis actually developed a word for it. Gleichschaltung. They understood that when they came into power they had to undermine those civil and democratic institutions and hollow them out till they’re either pointless or irrelevant.

I’m obviously not comparing the Conservative government to the Nazis – quite careful what we do here – but what I am saying is there is a theme running through neo-liberal approaches to democratic institutions.’

Also on the panel was Janine Booth, of the RMT union, who told the event: ‘We need to abolish the monarchy. We also need a right to protest, we need to take direct action, and democracy, yes, sometimes involves breaking bad laws.’

She admitted there was ‘a genuine issue… with anti-Semitism within the Labour movement’, but said it needed to be confronted through political education and debate rather than disciplining offenders.

‘It is this type of rhetoric that encourages followers to violent and sinister behaviour. Most importantly, what he is saying is also historically inaccurate. The capitalist system has provided this generation with the best healthcare, education and social services in the history of the country. Clive Lewis is an ill-informed, ignorant fool.’

Former Tory Party vice-chairman Shailesh Vara said the comparison was ‘not only completely wrong’ but ‘grossly offensive to millions’.

Last night Mr Lewis said: ‘As I said on the panel, I was in no way comparing the Nazis to the Tories. To suggest otherwise is grossly misleading.’

The RMT said: ‘Janine Booth was not representing RMT on this platform and the views she expressed were her own.’

Miss Booth said: ‘I was invited to speak as an individual, and references to my trade union affiliation were just for descriptive purposes.’

A key ally of Jeremy Corbyn, hard-Left MP Clive Lewis has been tipped as a future leader of the Labour Party.

The former BBC presenter and Army reservist, who was raised on a council estate in Northampton, became the MP for Norwich South in the 2015 election. 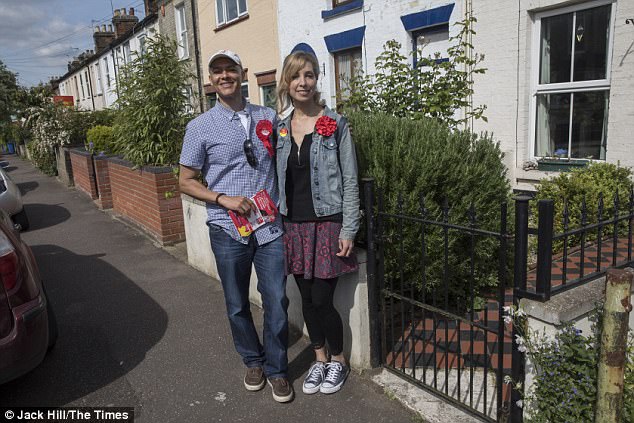 Mr Lewis, who is married to the actress Katy Steel, was promoted to the shadow cabinet as defence spokesman by Mr Corbyn last summer after mass Labour frontbench resignations

In the two years since, the 46-year-old self-proclaimed ‘proud socialist’ has been at the centre of a number of controversies.

Mr Lewis, who is married to the actress Katy Steel, was promoted to the shadow cabinet as defence spokesman by Mr Corbyn last summer after mass Labour frontbench resignations.

But he missed his first Commons questions session because he was at Glastonbury Festival.

At last year’s Labour Party conference, Mr Lewis was said to have punched a wall in fury after Mr Corbyn’s spin doctor Seumas Milne changed his speech minutes before he went on stage.

The former soldier, who served as an officer in the Territorial Army, including a stint in Afghanistan, had apparently planned to say that he would not challenge Labour’s official policy that Trident should be renewed. 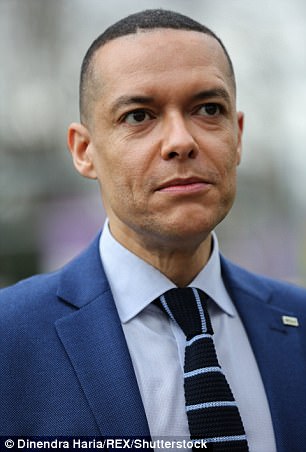 At last year’s Labour Party conference, Mr Lewis was said to have punched a wall in fury after Mr Corbyn’s spin doctor Seumas Milne changed his speech minutes before he went on stage

But the line was cut to keep open the possibility of scrapping the nuclear deterrent – and Mr Lewis was reportedly notified only by post-it note.

Sources said he was so furious that he punched a wall, swore and threw his mobile phone.

Mr Lewis publicly played down the reports, saying he was ‘really pleased’ with the speech, adding there was ‘nothing to see here’.

Last October, he was shifted to business spokesman.

However, he resigned from the shadow cabinet in February after voting against the Brexit Bill.

His position was that, while he respected the result of the referendum in favour of leaving the European Union, he was unhappy that Labour had failed to secure amendments to the legislation.

Mr Lewis, who was one of the original organisers of the Momentum grassroots campaign, said at the time that he could not ‘in all good conscience’ support a bill that he believed would ‘harm’ his constituents.