A Labour MP critical of Jeremy Corbyn is in secret negotiations to receive a 24-hour armed guard after being subjected to chilling death threats, The Mail on Sunday can reveal.

The backbencher has been in talks with Commons security advisers about being given unprecedented police protection on a par with the Home Secretary.

If agreed, it will be the first time that a rank-and-file MP on mainland Britain has been granted such security.

One senior Commons source said: ‘This is an extremely serious threat. I would say that this MP needs this protection more than the Northern Ireland Secretary does – which is a sign of the times.’

The MP, whom The Mail on Sunday has chosen not identify because of the safety risk, has received frequent abuse on social media for criticising Mr Corbyn.

Security outside the Labour Party conference in Liverpool. A Labour MP could be having the same level of protection after receiving death threats

It is not known who is behind the death threats, but they are specific. We have also chosen not to describe their precise nature.

Separately, it can also be revealed today that a 29-year-old man has been arrested over accusations that he sent ‘abusive emails and phone calls’ to Labour MP Joan Ryan, the chairman of Labour Friends of Israel.

Ms Ryan, who has been fiercely critical of Mr Corbyn over his handling of Labour’s anti-Semitism storm, is currently facing a deselection threat by members of her local party who are loyal to the Labour leader.

This newspaper has been told that the man, who has been released on a month’s bail by Gloucestershire police, had allegedly bombarded Ms Ryan’s Enfield North constituency office with offensive calls.

Ms Ryan earlier this month narrowly lost a no-confidence motion in her local party amid claims she had ‘smeared’ Mr Corbyn.

In what Ms Ryan called an ‘appalling infiltration’, the private meeting that debated the motion was broadcast on Iranian channel Press TV – allegedly by an employee who was also a local party member.

The MP, a former Minister in Tony Blair’s Government, responded by lashing out at ‘Trots, Stalinists, Communists and assorted hard-Left’ after losing the vote.

The proposals will be put to delegates at the Labour Conference when it opens today. 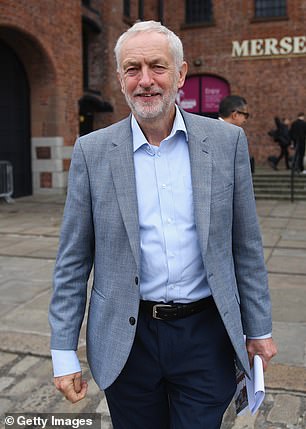 Labour leader Jeremy Corbyn leaves the party conference. A backbench MP critical of his leadership is in talks about getting 24-hour armed guard

It also emerged yesterday that, in the wake of the claims, extra bodyguards have been drafted in to protect the Labour Friends of Israel annual reception at the conference in Liverpool.

Last night, one Labour MP and critic of Mr Corbyn said: ‘I am afraid that Jeremy Corbyn’s leadership has injected a poison and hatred into the Labour Party which we have never seen before.’

When asked to comment on the plans to give one of their MPs an armed guard, Labour responded last night by highlighting how many recent threats had come from Right-wing extremists rather than Left-wing ones.

A spokesman said:  ‘There have been a number of cases in recent years of serious threats, plots and one fatal attack against our MPs from far-Right white supremacists. We liaise closely with MPs about security threats and do not comment on individual cases.’

Party sources added that they did ‘everything we can to support our MPs and ensure they receive specialist police and security services advice and support’. But another Labour MP said: ‘Whoever’s making these disgraceful threats – whether it’s a Left-wing nutter or a Right-wing one – the point is that some MPs critical of Corbyn have been subjected to a torrent of abuse by so-called supporters of our Party leader which has whipped up hatred against them.’

The unprecedented move to place the MP under the armed protection of the Parliamentary and Diplomatic Protection Command was first mooted with the Commons authorities earlier this month after the politician was advised to beef up their security urgently.

This newspaper understands that the case will be assessed by Scotland Yard’s Parliamentary Liaison and Investigation Team at Westminster, set up after the murder of Labour MP Jo Cox in 2016.

Mother-of-two Mrs Cox died after being shot and stabbed in her West Yorkshire constituency by neo-Nazi extremist Thomas Mair, who was jailed for life for her murder.

The elite police unit assesses threats to MPs’ safety to ensure they are properly investigated, after complaints that many had been ignored. In March this year, the Met police revealed that 237 incidents had so far been brought to the team’s attention.

These included 97 claims of malicious communications – often abuse made on social media – along with two allegations of assault and 85 of possession of a blade, thought to refer to items found on visitors to the Palace of Westminster.