Corbyn meets his top team to hammer out Brexit position

Jeremy Corbyn will today meet his top team to hammer out their Brexit position amid party in-fighting about what their policy should be.

The Labour leader had pledged to back Britain leaving the single market and customs union – which will allow the UK to regain control of its borders and strike deals globally.

But he is facing fierce opposition in his own party from Remain-backing MPs who are demanding the UK stay in the EU bodies.

And Emily Thornberry, Labour’s shadow foreign secretary, hinted that Labour will change position to campaign for Britain to stay in the EU customs union.

Jeremy Corbyn (pictured at a rally in Scotland last Monday)  will today meet his top team to hammer out their Brexit position amid party in-fighting about what their policy should be.

She told ITV’s Peston on Sunday: ‘We’ve got the national policy forum going on at the moment… so there will be a debate.’

She added: ‘What we do is we accept the result of the referendum, we have to leave the European Union, if we’re leaving the EU then we have to negotiate an ongoing relationship with the EU.

‘We want to have, we’ve looked at it and we cannot see a way forward when it comes to Northern Ireland or to tariff free trade across Europe without us being in some form of customs union that probably looks very much like the customs union that there is at the moment, and that’s our position on that.’

Labour’s Brexit position has been shrouded in mystery ever since the historic referendum over 18 months ago. 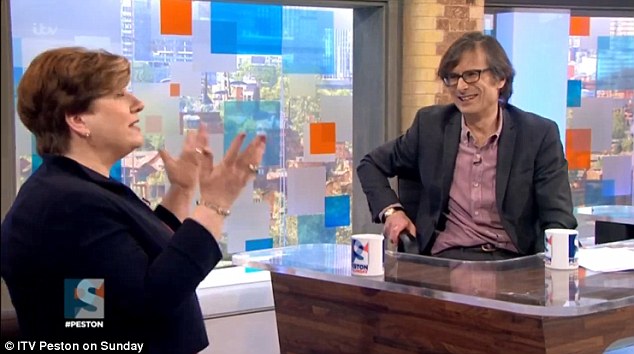 And many of the party’s working class voters in the Labour heartlands voted for Brexit.

But their MPs are overwhelmingly pro Remain and the influx of young Momentum activists who have signed up to the party are also anti Brexit.

And the Labour leader’s office has been inundated by messages from 20,000 party members demanded a stronger say on the party’s Brexit policy.

At a mystery location believed to be in London, Mr Corbyn and his shadow ministerial team will meet to thrash out the party’s policy.

Theresa May has vowed to take Britain out of both the customs union and the single market.

She says Britain must be outside the customs union so it cans trike free trade deals with their countries around the world.

And it must be out of the single market so that free movement can end and immigration can come down.