Corbyn ‘shrugged’ at demands for Labour action on anti-Semitism

Jeremy Corbyn’s bid to defuse the crisis over anti-Semitism in Labour backfired today as campaigners gave a damning assessment of his response.

The veteran left-winger was said to have ‘shrugged’ when told at a meeting with Jewish community leaders that he was failing to condemn a wave of abuse from supporters.

He also refused to agree to expedite investigations into cases of alleged anti-Semitism, ban MPs from sharing platforms with those accused of it, or adopt an international definition of the vile behaviour.

Mr Corbyn agreed to the hour-long meeting Board of Deputies and Jewish Leadership Council after an unprecedented storm of protests.

Labour MPs are among those who have demanded action to root out anti-Semitism they say has risen to the surface since Mr Corbyn took over as leader.

But Jonathan Goldstein of the JLC said Mr Corbyn ‘engages in conversation until you ask him to do something’.

‘When you ask him to do something he has this habit of staring and just shrugging,’ he told the BBC Radio 4 Today programme.

Members of the Board of Deputies addressed the media last night after the meeting with Mr Corbyn. Picture left to right are Gillian Merron, Jonathan Arkush, Jonathan Goldstein, and Simon Johnson 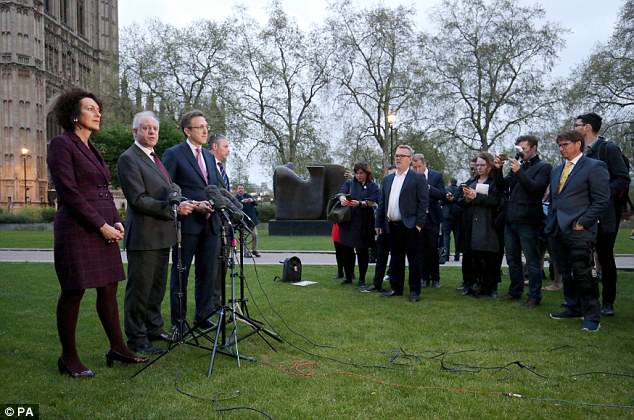 In his own statement yesterday, Mr Corbyn insisted it had been a ‘positive and constructive meeting’ with the Jewish leaders 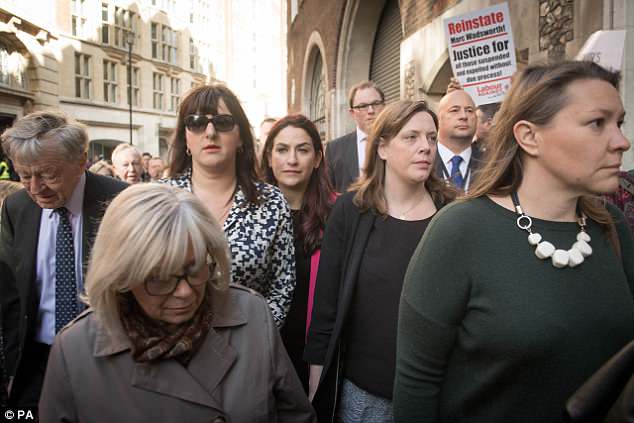 In a statement after the private meeting last night, Mr Goldstein and Jonathan Arkush of the Board of Deputies said: ‘We are disappointed that Mr Corbyn’s proposals fell short of the minimum level of action which our letter suggested.

‘In particular, they did not agree in the meeting with our proposals that there should be a fixed timetable to deal with antisemitism cases; that they should expedite the long-standing cases involving Ken Livingstone and Jackie Walker; that no MP should share a platform with somebody expelled or suspended for antisemitism; that they adopt the full International Holocaust Remembrance Alliance (IHRA) definition of antisemitism with all its examples and clauses; that there should be transparent oversight of their disciplinary process.’

The pair warned Mr Corbyn that ‘letter and words will never be enough’ and told him: ‘We welcome the fact that Mr Corbyn’s words have changed but it is action by which the Jewish community will judge him and the Labour Party.

‘Our sole objective from this meeting was to build trust with Mr Corbyn, but this will not be possible until and unless he and the party turn their many strong words against antisemitism into equally strong actions in order to bring about a deep cultural change in his supporters’ attitude to Jews.’

Labour tried to limit the damage today by suggesting that the bulk of anti-Semitism disciplinary cases will be dealt with by July.

But it has emerged that frontbencher Chris Williamson, an ally of Mr Corbyn, is planning to share a platform with Jackie Walker, who was suspended by Labour over allegedly anti-Semitic comments in 2016.

He told BBC Radio 4’s Today programme: ‘It’s right that when somebody has been found guilty nobody should share a platform.

‘My own view, my personal view, is that Chris is wrong to share a platform with somebody who has expressed the views that she has.’

Dozens of Labour politicians marched across Westminster today in an extraordinary show of support for Jewish MP Ruth Smeeth ahead of an anti-Semitism hearing.

Ms Smeeth came face to face with Marc Wadsworth – the activist who left her in tears at the launch of the Labour anti-Semitism report after accusing her of working ‘hand in hand’ with the press – at the hearing.

Around 50 MPs and peers escorted Ms Smeeth from Parliament to the hearing held nearby to show that they support her.

Wes Streeting, Labour MP for Ilford North who organised the march, said it is an ‘appalling state of affairs’ that a Labour MP must be escorted for fear of intimation.

A small group of Corbynista activists had gathered outside the hearing shouting and chanting as Ms Smeeth walked in to the hearing, where Labour chiefs will decide whether or not to kick Mr Wadsworth out.

In his own statement after the talks with Jewish leaders last night, Mr Corbyn said it had been a ‘positive and constructive meeting’ and reiterated his commitment to ‘rooting out anti-Semitism from Labour.

He warned his own supporters the claims were not ‘smears’ and vowed not to fail the Jewish community.

But he laid out no new measures to tackle the problem, adding: ‘I have charged our new General Secretary Jennie Formby with improving our disciplinary procedures as her top priority to ensure all complaints are dealt with swiftly and fairly.

‘We are grateful for the input from Jewish community groups, who we will continue to listen to carefully.

‘We will lay out the further steps we are taking in the coming weeks. We will continue to engage and work with Jewish community organisations to deal with this issue.

‘Our party will not fail our Jewish brothers and sisters.’

However, Mr Arkush and Mr Goldstein said that after ‘two years of inactivity’ by the Labour leadership, such statements were no longer enough.

They said the proposals they had put forward – which included a fixed timetable for dealing with outstanding case of anti-Semitism, , expediting long-standing case like that of Ken Livingstone, and the ‘transparent oversight’ of the party’s disciplinary process – was the ‘minimum level of action’ they expected.

‘Words in letters and newspaper articles will never be enough. We welcome the fact that Mr Corbyn’s words have changed but it is action by which the Jewish community will judge him and the Labour Party,’ they said.

‘Thousands of British Jews did not demonstrate outside Parliament just for a few lawyers and another newspaper article; they demanded action and so do we.

‘We will hold the Labour Party to account for any future failures and continue to represent the interests of British Jews with clarity and resolve. We also commit to do our utmost to work with all those within Labour who want to help make it a safe and equal space for all of its members.’

The Labour leader admitted there is a ‘clear’ problem inside his party and apologised for the ‘hurt and distress’ caused by the failure to tackle it.

For the first time Mr Corbyn took aim at pro-Palestinian groups for blaming Jews for the actions of the Israeli government.

Susan Pollack, 87, a survivor of Auschwitz, said yesterday that ‘kind words are not enough’ and Mr Corbyn must show he is a real leader. 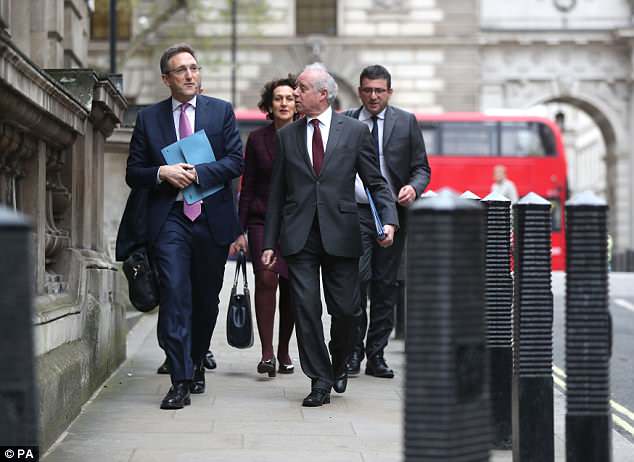 Jonathan Goldstein (left), from the Jewish Leadership Council, and Jonathan Arkush (right), from the Board of Deputies, arrived at Parliament last night for show down talks 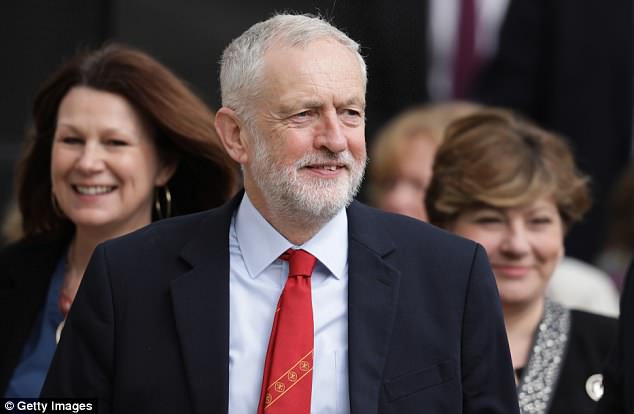 Ms Pollack, 87, a survivor of Auschwitz, told the BBC Mr Corbyn’s ‘kind words are not enough’ and demanded he show he is a real leader.

Describing her message to the Labour leader, Ms Pollack said: ‘My message is clear to say – act. Do something.’

She added: ‘Kind words are not enough. Apologies accomplishes nothing, you have got to act and act as a leader and give an example – that in Britain or anywhere in the world anti-Semitism is a vile, evil kind of behaviour.

‘He has to act and show his leadership and I think that’s the only way he will have respect.’

Ms Pollack was sent to Auschwitz and was later forced on the infamous death march to Bergen-Belsen.

She was liberated by British troops in April 1945 but had lost all her family in the horrors of the Holocaust.

In the aftermath of the meeting, Mr Corbyn sought face to face talks with mainstream community leaders.

And ahead of the meeting, Mr Corbyn wrote in the Standard: ‘We have not done enough fully to get to grips with the problem, and for that the Jewish community and our own Jewish members deserve an apology.

‘My party and I are sorry for the hurt and distress caused.’ 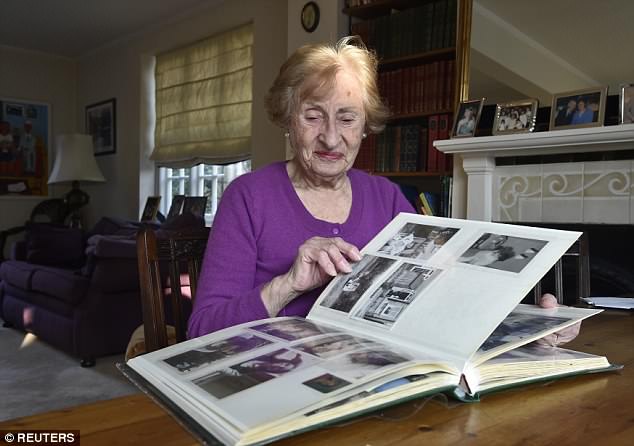 Susan Pollack (pictured), a survivor of Auschwitz, said ‘kind words are not enough’ and Mr Corbyn must show he is a real leader and root out the ‘vile evil’ of anti-Semitism

Labour has been dogged by accusations of anti-Semitism ever since  Mr Corbyn became leader  in 2015.

Jewish MPs have told how they have received hate mail, death and rape threats after daring to speak out against the abuse.

Jewish MPs Luciana Berger and Ruth Smeeth read out examples of the shocking barbs they have received from activists in a debate in Parliament last week.

MPs on all sides broke with convention to give the pair standing ovations in the Commons. Some MPs were reduced to tears by their harrowing stories.

Fellow backbencher John Mann revealed his wife had been sent a dead bird through the post, and that she had been threatened with rape.

Party veteran Margaret Hodge said she ‘didn’t feel at home’ and felt a ‘bit of fear’ about anti-Semitism in the party she has been a member for more than 50 years.

Jewish leaders took the unprecedented step of calling a  demonstration outside Parliament last month to protest at Mr Corbyn’s lack of action on the issue.

The ‘enough is enough’ protest saw hundreds descend onto Parliament Square to demand tougher action to tackle the abuse. 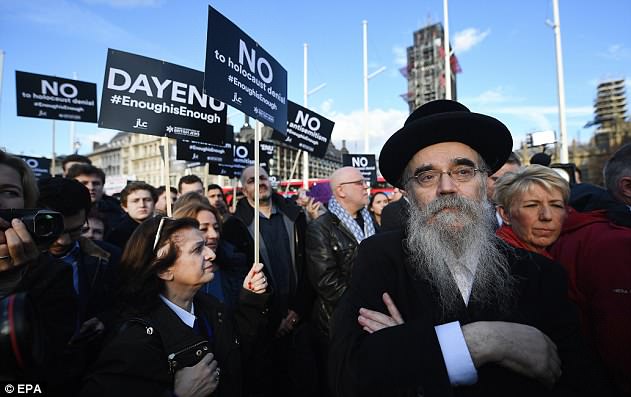 Jewish leaders took the unprecedented step of calling a demonstration outside Parliament last month (pictured)  to protest at Mr Corbyn’s lack of action on the issue.