Corbynista Labour candidate crowdfunds £2,000 towards her rent and food bills

A Corbynista Labour candidate wants the public to pay for her rent, bills and even food through crowdfunding so she can stay glued to the campaign trail.

Two Just Giving pages were set up to raise funds for Corrie Drew – the Parliamentary candidate for Bournemouth East, and almost 100 people from across the country have given a total of more than £2,000 to the 37-year-old since December 2018.

She works part-time as a cleaner – and is lodging to save money – but says that is not enough to make ends meet while canvassing support. 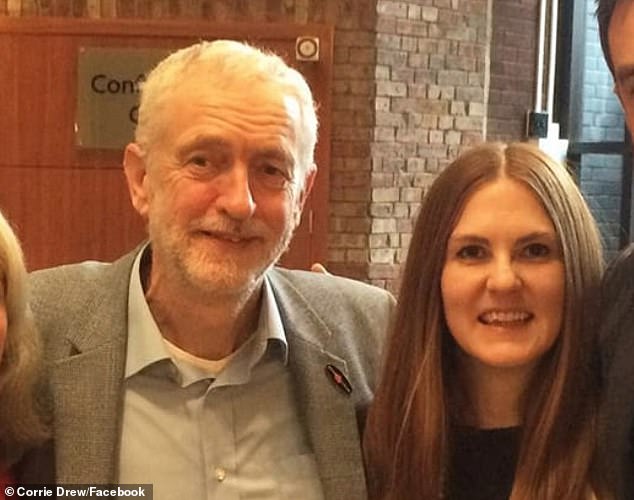 Ms Drew pictured with Labour leader Jeremy Corbyn, said on her Just Giving page she is ‘fiercely committed to building a country that works for everyone’

It reportedly costs prospective candidates £11,000 to stand in an election. The large sum can price people on lower incomes out of becoming a candidate, new figures revealed last year.

Ms Drew – who describes herself as a ‘council estate girl’ on her Twitter bio – said: ‘I still cannot continue to give so many hours to Labour, though, without your help.’

Her Just Giving page explains: ‘Corrie is fiercely committed to building a country that works for everyone with not one of us left out.

‘She dedicates much of her time to campaigning and training whilst still trying to hold down a job.

‘Running a campaign which is reliant on local volunteers, whilst being on a low income herself, means that Corrie really struggles to juggle paying for her own rent and bills.’ 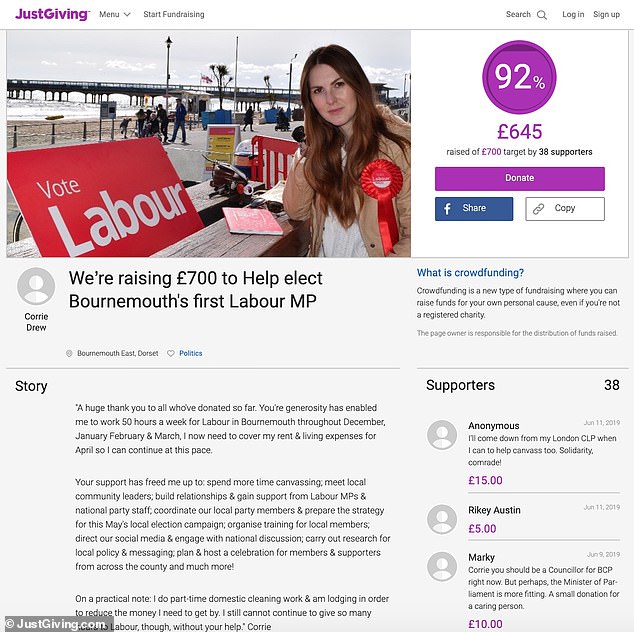 The cash-strapped candidate, who has a first class degree in horology, the study of time, from Birmingham City University, said: ‘Your support has freed me up to spend more time canvassing, meet local community leaders and gain support from Labour MPs and national party staff.

‘A huge thank you to all who’ve donated so far.

‘Your generosity has enabled me to work 50 hours a week for Labour in Bournemouth.

‘I now need to cover my rent and living expenses for April so I can continue at this pace.’ 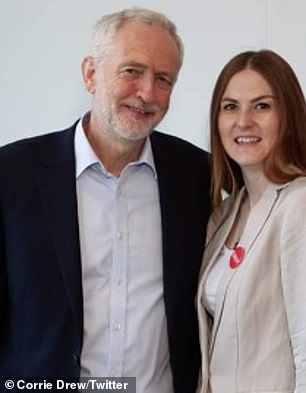 The Labour candidate says the money goes into a separate bank account, so as not to be confused with campaign expenses for things like leaflets

The Corbynista, whose favourite hashtag is #socialistsunday, initially set up a Just Giving page in December last year, which raised £1,583.

After that expired in March, she launched a second which has received £630 in donations.

The Labour candidate says the money goes into a separate bank account, so as not to be confused with campaign expenses for things like leaflets.

Appealing for donations, she added: ‘I want more than anything for people to believe that politics is about making a difference for them as opposed to the common perception that it’s a game played by wealthy people in Westminster.

‘With your help we can change that and put people back at the heart of our democracy and political system.’

Ms Drew, who originates from the West Midlands, moved to Bournemouth when she was 18.

She said: ‘I really fell in love with Bournemouth, and by working with some of the town’s most vulnerable I became extremely concerned about the inequalities and struggles faced by people trying to make a living in one of the most expensive parts of the country.

‘Bournemouth elections have traditionally been fought by people with personal money.

‘I don’t want anything, let alone a person’s socio-economic background, to stand in the way of true democracy and Bournemouth being a place where all people have the chance to be happy, healthy and prosperous with no one left out. 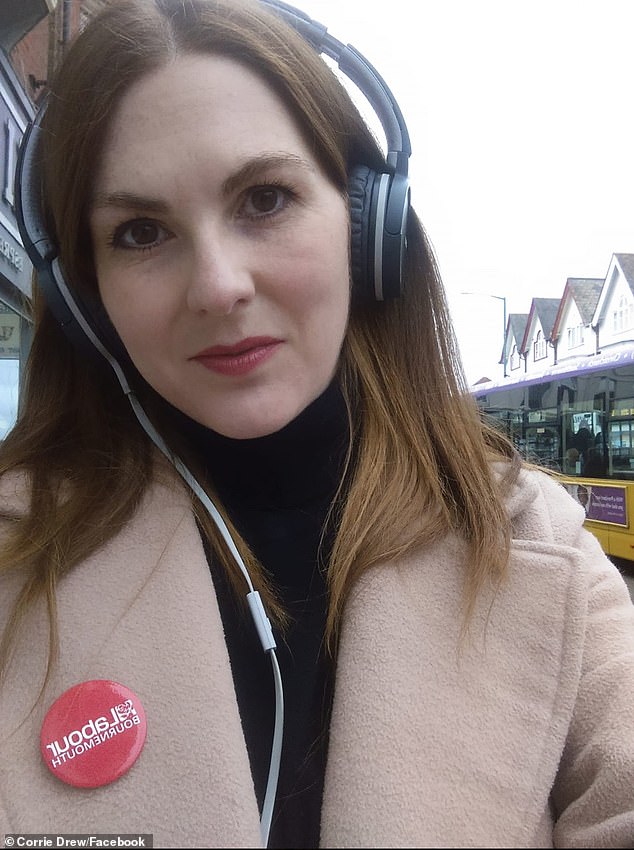 ‘I’m wholeheartedly invested in doing whatever it takes to make a profound difference for our town and you can count on me if elected, to be your passionate, principled, local voice in Parliament.’

Corrie is a fierce Jeremy Corbyn supporter and has posted many pictures of the Labour leader on her social media accounts.

She has even been snapped in a T-shirt emblazoned with his face while other pictures show her sporting Corbyn badges.

She tweeted: ‘I’ve had total, unwavering confidence in Jeremy Corbyn since I joined Labour in 2015.

‘When I first saw him speak and read about his work I felt real hope.’

It reportedly costs prospective candidates £11,000 to stand in an election.

Tobias Ellwood is the current MP for Bournemouth East, winning 51.9% of the vote in the 2017 General Election.

However Labour’s candidate at the time, Mel Semple, came second, putting on 18.9 per cent during her campaign.