The actress, 29, who returned to her role as Grace Vickers last year following a break from the soap, shared the news with fans as she marked her final day in job during a touching Twitter post.

Kate added that she decided to train up for a new vocation to gain some ‘regularity’ in her life, after being left out of work when she left Corrie during lockdown.

Change in career? Coronation Street star Kate Spencer has revealed she’s been working part-time as an estate agent during lockdown

In her Instagram post, Kate was dressed in chic office attire as she posed outside her offices with flowers in hand.

Revealing the job she’d taken on in lockdown, she wrote: ‘Today was my last day at the part-time job I did during lockdown.

‘Huge shout out to @BelvoirLetsWB for welcoming me in with opening arms, teaching me all about property, giving me some sort of regularity over the last year and always having a giggle. 10months of gratefulness.’ 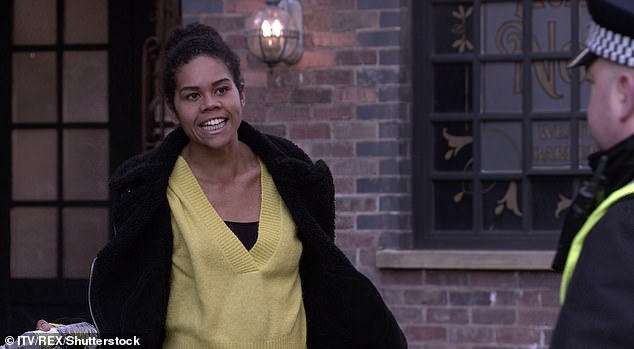 Screen star: The actress plays Grace Vickers on the ITV soap, and returned to the role late last year following a short break 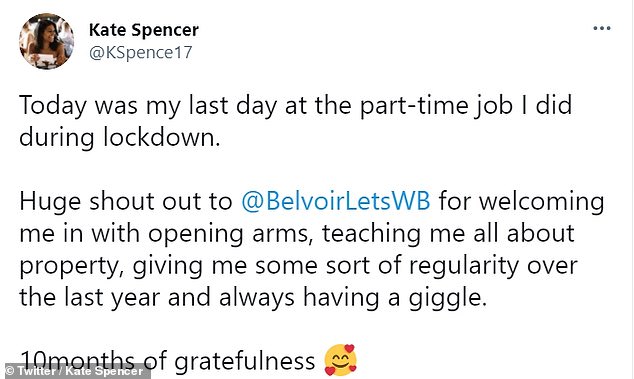 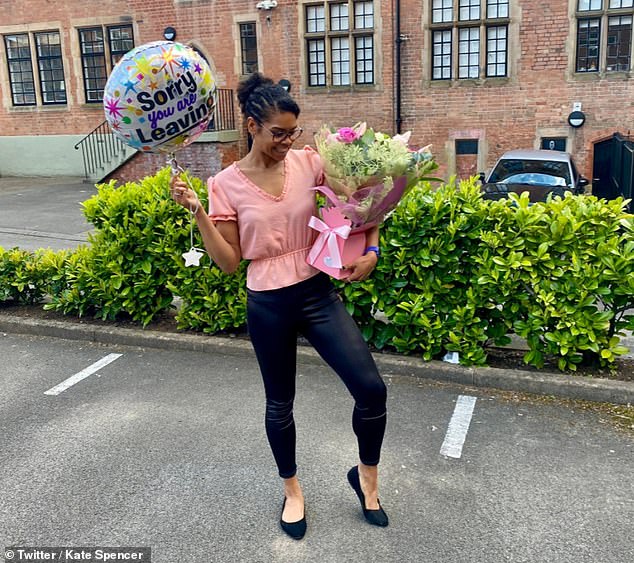 Different: Kate revealed her career change as she marked her last day in the job on social media, adding she decided to train for the new vocation to get some ‘regularity’ in her life

Last year Kate returned to Corrie reprise her role as Grace, heading back to the cobbles to reveal that she was pregnant with Michael Bailey’s child.

Her character had fled the street earlier in 2020 after it was revealed she’d committed paternity fraud by claiming Michael was the father of her daughter Tianna, when in reality she was just the child’s nanny.

It comes after Kate revealed in March she shed four stone before joining the cast of Corrie, and had been overweight before she discovered a  passion for boxing, yoga and running.

Speaking to Inside Soap magazine, she said: ‘I actually lost four stone about five years ago, partly through training and also eating better. 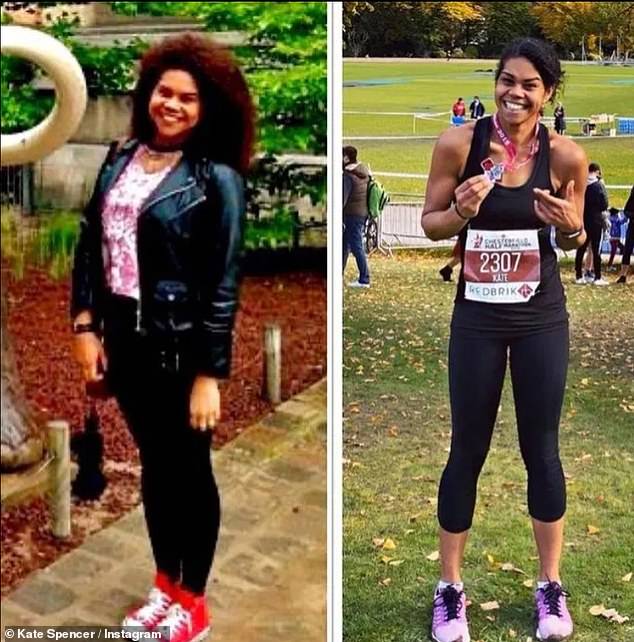 Transformation: It comes after Kate revealed in March she shed four stone before joining the cast of Corrie

‘I love running, and I did five half-marathons in 2020 – I ran one this morning too! I have the Hamilton soundtrack and Jason Derulo on my running playlist.’

Kate, who worked at the box office in Derby Theatre before landing her role on Coronation Street, told how she has been keeping fit with her boyfriend Paul Walker in lockdown.

She said: ‘I’ve been doing some boxing with my boyfriend during lockdown as well, but I’m not a good student, and he’s a pro. I always think I know better!’

Kate also told how Paul has helped her with her scenes for Coronation Street and often reads lines with her, where he usually plays Michael (Ryan Russell). 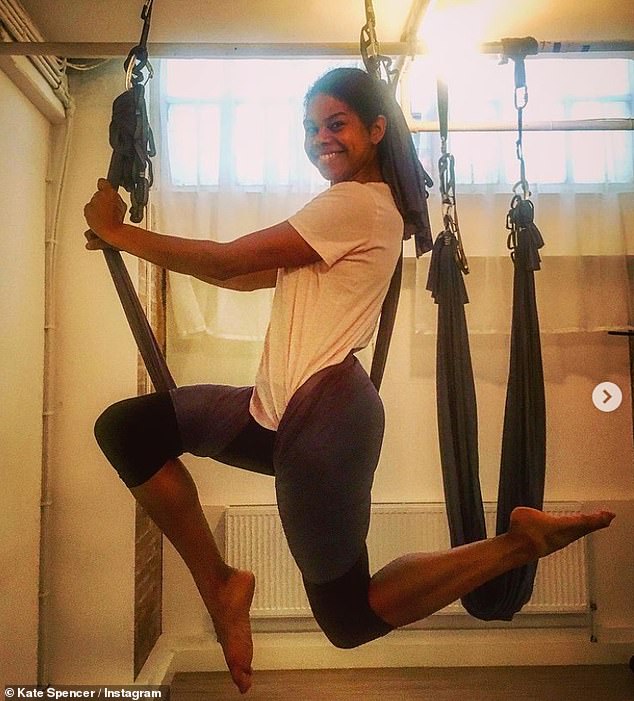 Fitness: She revealed she was previously overweight before she discovered a passion for boxing, yoga and running

The actress spoke about her weight loss journey in a social media post where she shared before and after photos taken five years apart.

‘It hasn’t been all sunshine and lollipops, but nothing feels as good as working hard and achieving feels.

‘These last couple of weeks in isolation, I’ve hardly been particularly ‘creative’ (I mean that’s entirely subjective anyway…) but I’ve progressed, made PB’s and hit targets in other aspects of my life that 5 years-ago-me would never have thought possible, so for that, I’m feeling not too shabby.’ 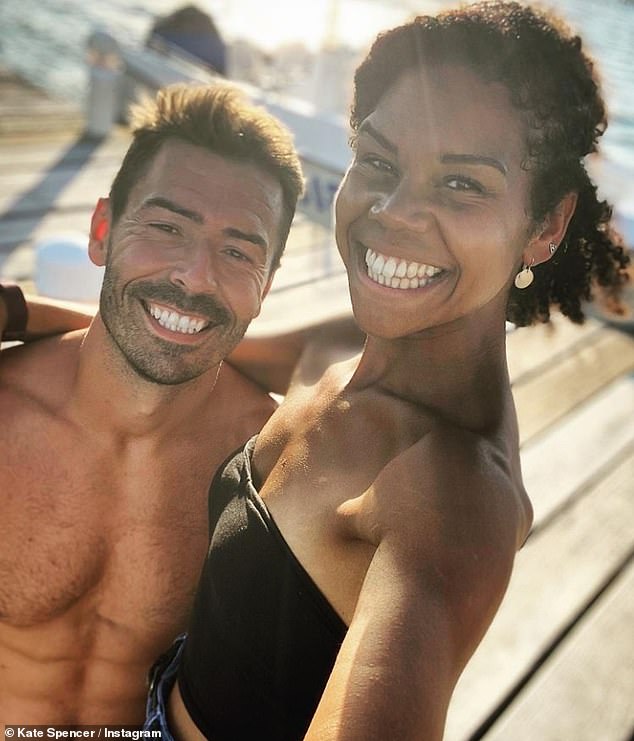 Couple: Kate, who worked at the box office in Derby Theatre before landing her role on Coronation Street, told how she has been keeping fit with her boyfriend Paul Walker

Kate joined the soap as Michael Bailey’s ex in 2019 and she has also appeared in Doctors and Survive The Night.

Speaking to Derbyshire Live about joining the soap, she said: I’ve been a huge fan of Coronation Street since a child, my mum is obsessed – it’s wonderful to be part of it.

‘Grace is quite difficult because people don’t know how to react to her because she’s been guarded and caged throughout [her life].’ 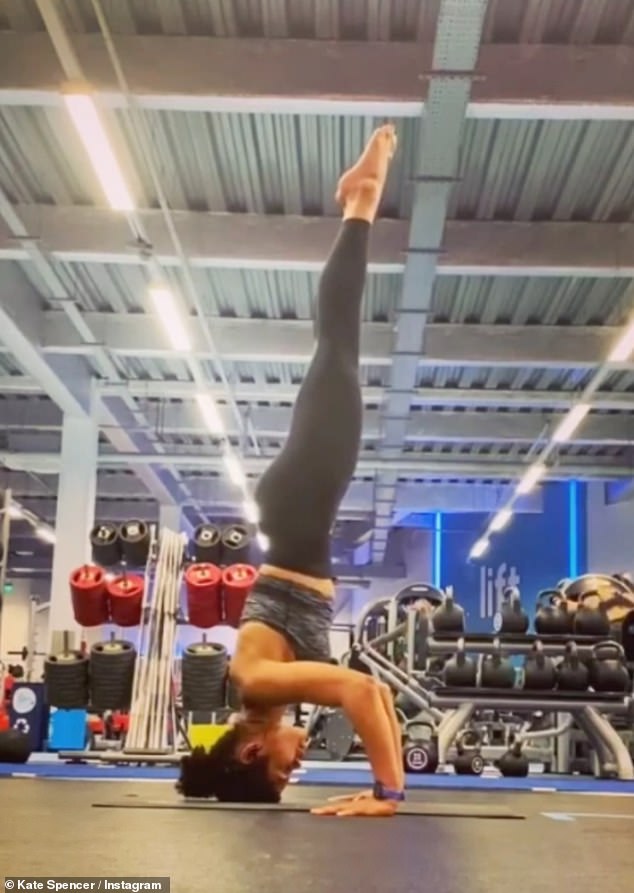 Kate said: ‘I actually lost four stone about five years ago, partly through training and also eating better. I love running, and I did five half-marathons in 2020’