Sydneysiders have repeatedly been told the west and southwest of the city are the new epicentres of the Indian Delta outbreak, with draconian restrictions brought in across eight Local Government Areas encompassing 94 suburbs.

But data from the past seven days shows the surge in Covid cases is ‘not just a western Sydney problem’ and health experts, along with fed-up residents, are calling for the same stringent lockdown measures – including mandatory masks even outdoors – to be brought in on the other side of the latte line.

It comes as NSW reported a record 239 locally acquired cases on Thursday, bringing the total number of infections during this latest outbreak to 2,810.

While there are certainly more cases in Sydney’s west and south-west than in other areas, nowhere in the city seems to have escaped the latest outbreak unscathed with exposure sites popping up across Glebe, Bondi, Woolloomooloo and Pyrmont.

There were 104 infections recorded in the South Western Sydney Local Health District and a further 58 in the Western Sydney LHD on Thursday, but the skyrocketing cases in the city and its east have gone under the radar.

‘Not just a western Sydney problem:’ The map of case numbers over the past seven days shows what’s happening on both sides of the latte line – and that there are far more cases in the CBD and east than most people realise

Sydney LHD, which encompasses the CBD and highly-populated inner west, recorded 51 infections on the same day.

In the South Eastern Sydney LHD, which includes Randwich, Woollahra and Waverley, there were 14 new transmissions and the Northern Sydney LHD saw three cases.

Five were in the Blue Mountains and four from Illawarra Shoalhaven.

Fairfield Mayor Frank Carbone, whose suburb is one of eight deemed ‘Covid red zones’ along with Canterbury-Bankstown, Liverpool, Cumberland, Blacktown, Georges River, Campbelltown and Parramatta, says the lack of uniformity in the restrictions is causing a divide.

He is calling on the Berejiklian government to introduce the same rules right across the Harbour City.

‘The community has been fighting this for six weeks, we would much rather do what we have to do, let’s get on with our life, let’s beat this virus together, but it needs to be across the whole of Sydney,’ he told A Current Affair. 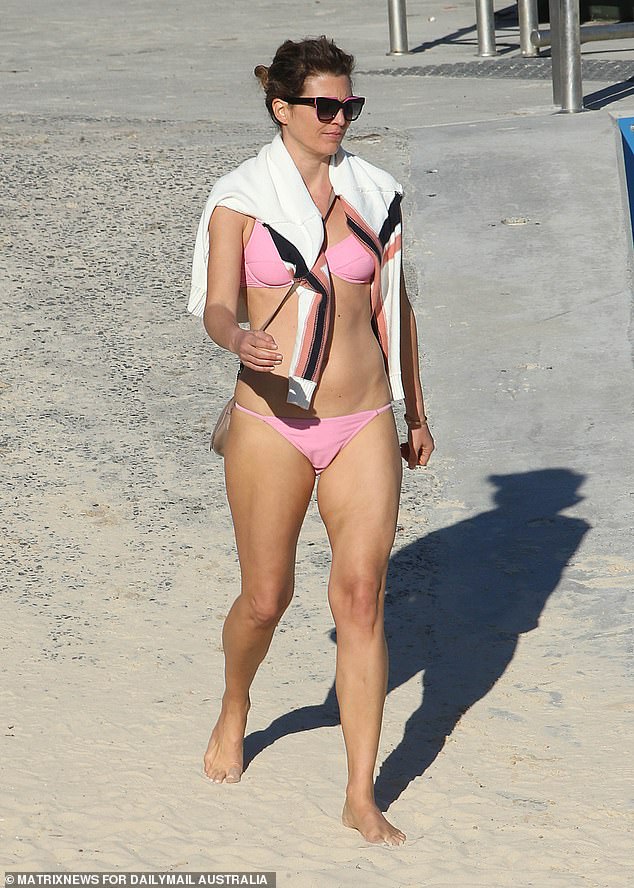 One of the most enduring mantras of the pandemic is that ‘we are all in this together’ but for many families living in the west, the saying rings out as a hollow slogan (pictured, a woman enjoying winter sun at Bondi Beach on Thursday)

The popular Mayor said the issue should be treated as a problem for all of Sydney, not just the west.

‘Seventy-one of today’s cases were outside the eight LGAs that are considered to be a hot spot and nobody is talking about that,’ he said.

‘We need the Premier and the cabinet to step up. At the moment, we’re getting policies that are dividing our community.’

‘We have done the tough yards but it’s not just a Fairfield problem,’ he said. 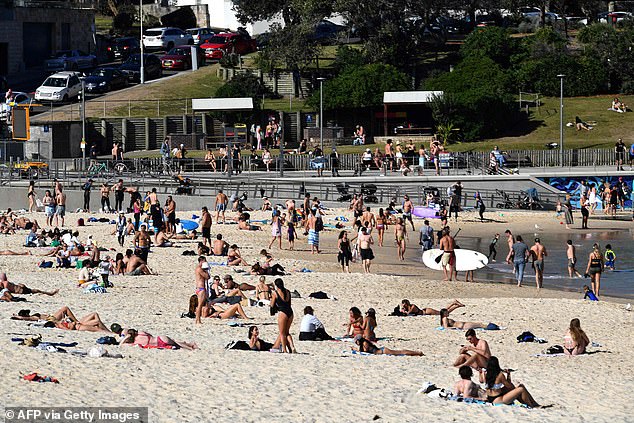 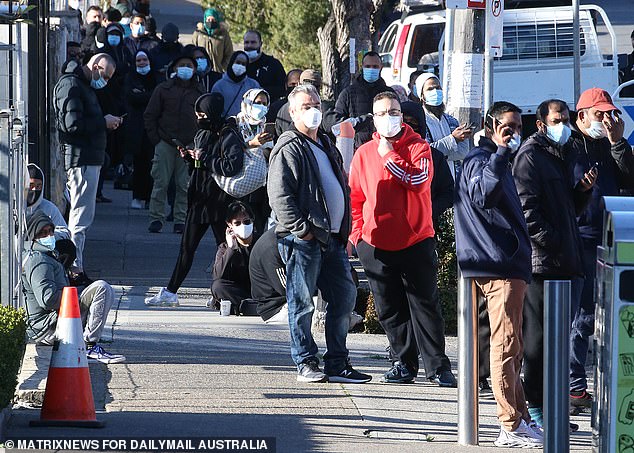 While Sydney’s CBD and east enjoy winter days in the sunshine, those in Lakemba (pictured on Thursday waiting for Covid tests) are besieged by restrictions on work and movement

One of the most enduring mantras of the pandemic is that ‘we are all in this together’ but for many families living in the multi-cultural west, the saying rings out as a hollow slogan.

Those communities are now preparing themselves for a contingent of Australian military personnel to set up a ring fence around their neighbourhoods with extra police on the streets to enforce Covid compliance.

Defence Minister Peter Dutton confirmed on Thursday night 300 personnel would be brought into the city, with patrols starting Monday.

‘We would support the army if they are doing contact tracing and supporting operational measures,’ Mr Carbone said.

‘The army and police are here to help the community, not work against it, and we need to make sure that the messaging is clear on that and that the community supports this.’

Public health expert Bill Bowtell and adjunct professor at UNSW who is also calling for uniform restrictions to be introduced throughout Sydney, said the tightening of lockdown measures announced today and impending use of the military is simply too little too late.

‘Whatever you do today should have happened five and six weeks ago,’ he said.

‘The harsher measures taken when the virus is rampaging through Sydney as it is now, well, it’s a bit too late.

‘We have to do a lot better. As the mayor says, this is not just a Fairfield or Liverpool problem.

NSW contact tracers, once labelled the ‘gold standard’ by Prime Minister Scott Morrison, have been facing immense pressure to keep up with the relentless surge of cases and exposure sites.

Health officials revealed on Thursday they have not been able to pinpoint the origin of 779 Covid cases.

In fact, there are still 118 cases from the first two weeks of July that remain a complete mystery and are still under investigation. 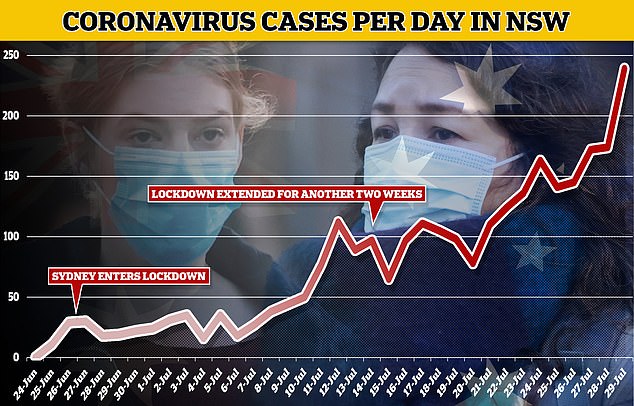 The latest outbreak began on June 16 when an unvaccinated limo driver from Sydney’s eastern suburbs is thought to have contracted the virus while ferrying international flight crew.

Ms Berejiklian has faced criticism for refusing to impose stay-at-home orders in Greater Sydney until June 26, 10 days after the city’s outbreak began.

When asked by reporters on Thursday: ‘Will you admit that your strategy has failed, that you have failed?’

She replied: ‘I’m never going to suggest we get everything right.’

‘I don’t think any government around the world can say they get everything right because there’s no rulebook.

‘I’m the first one to admit at every stage of the process in the last 18 months, with the benefit of hindsight it would be wonderful to know the alternative course. We’ll never know that.’ 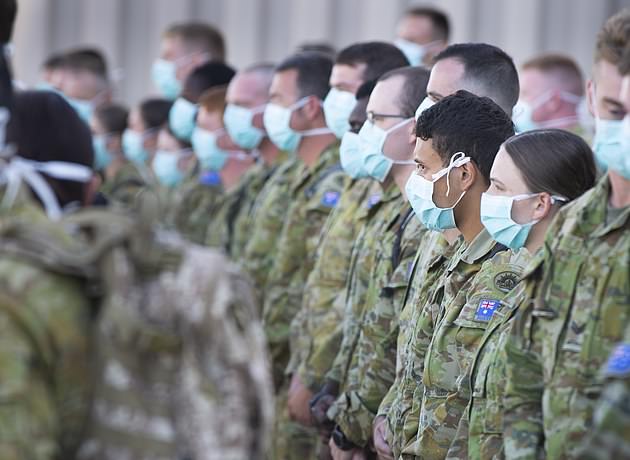 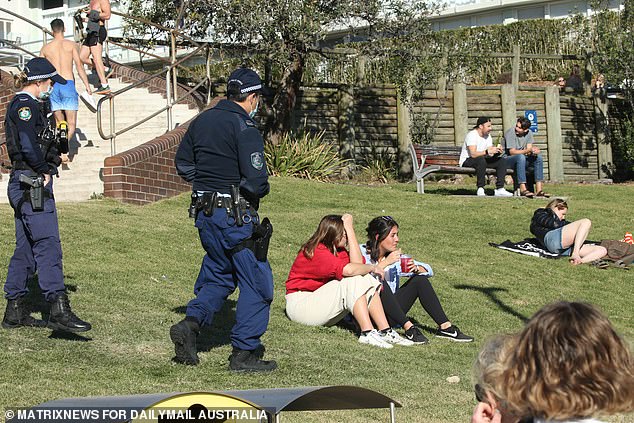 Just a day after extending the city’s stay-at-home lockdown for another four weeks, Ms Berejiklian also announced two million Sydney residents living in the eight hotspot LGAs would have to wear a mask whenever they leave home.

Penalties for not wearing a face mask across the city meanwhile will increase from $200 to $500, with thousands of police officers deployed across Greater Sydney to enforce the tightened restrictions.

‘The Delta strain is different to anything we have seen,’ Ms Berejiklian said.

‘I appreciate whilst all of us are under stress and pressure with the lock down, if you live in those eight local government areas, we are asking so much of you.’ 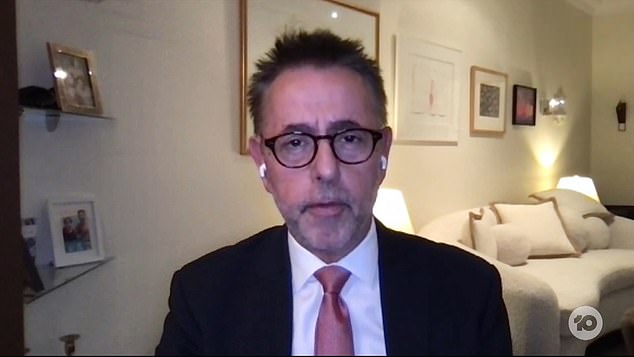 ‘The only thing that works in this is social distancing and human behaviour change,’ he said.

‘Vaccination is coming albeit at a very slow rate… but it’s precarious. It’s on a knife-edge and it could slip out of control.’

‘We are not going to get there terribly quickly in Australia – maybe March of next year to 80 per cent.

Anyone who attended the following venues at the times listed is a close contact and must get tested and isolate for 14 days, regardless of the result.

Anyone who attended the following venues at the times listed is a casual contact who must immediately get tested and isolate until a negative result is received.