‘There is so much fear in the lyrics’: School children are forced to learn a chilling song about the killer coronavirus leaving parents outraged

Parents are furious after children as young as seven were forced to learn a disturbing song about ‘people dying alone’ from COVID-19 .

Year two students, aged between seven and eight, were taught the ‘COVID-19 song’ at Bogangar Public School in Tweed Heads in northern NSW for a month.

Outraged that children were learning the distressing song, Brenda Steel shared a picture of the lyric sheet to Facebook on Sunday.

‘This (the song lyrics) was pulled out of my friend’s son’s bag. They are learning this for assembly. YEAR 2. This is nothing but mind control to instill fear and conformity,’ Ms Steel captioned the post.

Lyrics of a ‘COVID-19 song’ taught to year two students, aged between seven and eight, at Bogangar Public School in Tweed Heads in northern NSW for a month

The song’s morbid lyrics describe ‘people dying alone, connected to family only by phone’ due to social distancing restrictions.

‘News was scary tonight, the future is not so bright. Invisible killer stalking its prey, message was clear, stay home today!’ the lyrics read.

‘We’ve been forced into the ring against this pandemic monster thing – officials set out to control, protecting the young and the old.’

After building up fear, the end message of the song is for children to practice social distancing by not congregating and isolating when possible.

Mother Rachel Mathison said she was ‘shocked’ her year two son Kash was learning the song for a month before she found out.

‘It’s a very depressing song, there’s so much fear in the lyrics,’ Ms Mathison told The Daily Telegraph.

‘I felt awful when I read it so I can only imagine how an eight-year-old would feel not only reading it, but having to memorise it.’

‘The song’s made up by the school should now be sent to parents for feedback – it’s actually a very sad day when you need to start monitoring the activities that go on at your local school.’ 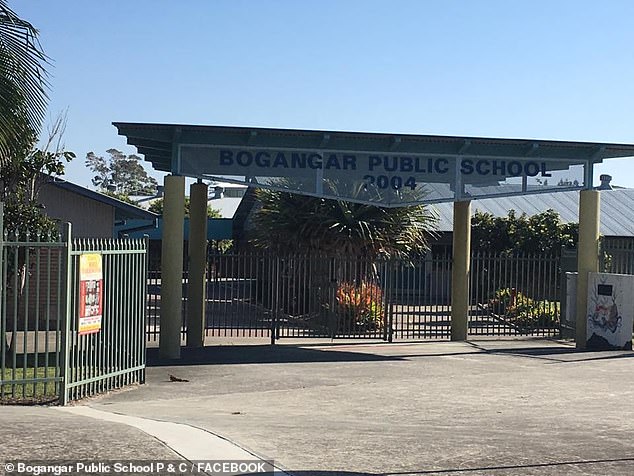 The entrance of Bogangar Public School. Mother Rachel Mathison said she was ‘shocked’ her year two son Kash learned mature song lyrics for a month before she found out

‘It has come to our attention that the Year 2 song students have started learning is a sensitive topic,’ Mrs Kelly wrote in the letter.

‘The students were entering the Australian Children’s Music Foundation singing and songwriting competition.

‘To enable this to continue, a new song is being co-written with year 2 under the guidance of their teachers.’ 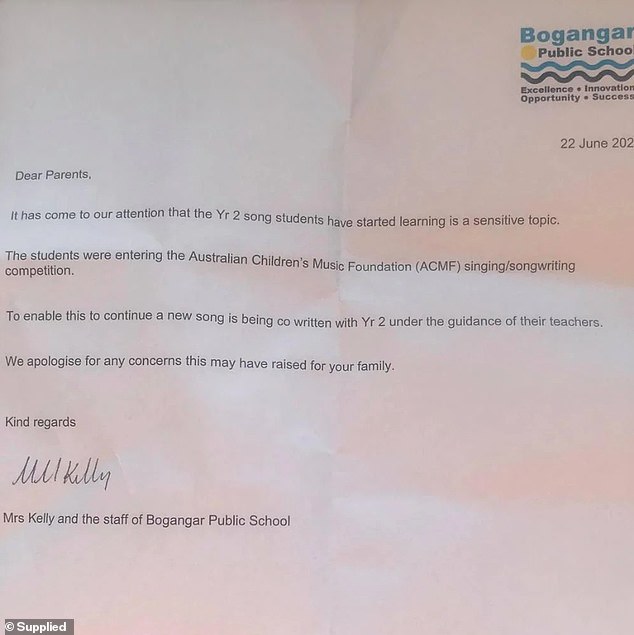