Coronavirus Australia: Scott Morrison begs Australians to get any Covid-19 vaccine they can ASAP

Scott Morrison has urged Australians to roll up their sleeves and get any Covid-19 vaccine they can get as soon as possible.

Vaccination efforts will ramped up around the country following the Prime Minister’s announcement on Thursday that 8.6million Australians aged 16-39 will be able to get the Pfizer vaccine from August 30.

The age group will be able to book an appointment at some point in the next week as the ongoing outbreak of the highly-contagious Delta strain worsens.

The Prime Minister tried to dodge the question when asked on A Current Affair if there will be enough Pfizer to go around.

Instead, he implored Australians to not to wait for their preferred vaccine if another jab is available sooner.

‘Not just Pfizer, AstraZeneca vaccine, Pfizer vaccine and starting next month also the Moderna vaccine,’ he told the program.

‘Right across all those vaccines, they are all effective and do the job that they need to do and that is stopping you getting it is much as possible, stop you transmitting it, stop you from getting a very serious illness and stopping you from being hospitalised and the worst extreme, death.’

So all those vaccines do the job so my encouragement is everybody, get the vaccine available today.

Mr Morrison has no regrets about comments made earlier this year that the vaccination rollout wasn’t a race as NSW recorded 681 cases on Thursday, its highest number of daily new infections.

‘It’s not how you start the race, it’s how you finish it and we’re finishing it very well.,’ he told acting ACA host Deborah Knight. 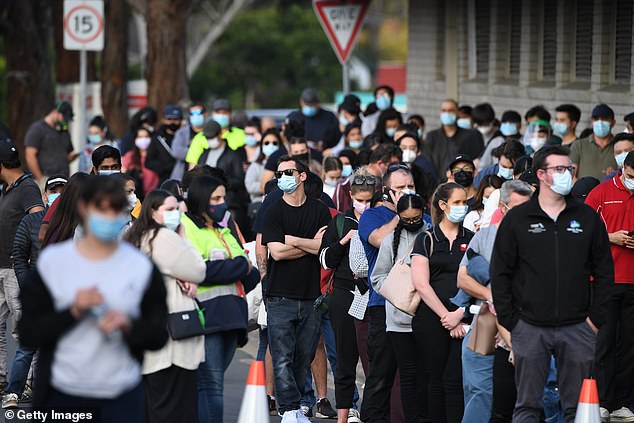 Australia’s top scientists have advised Australians over 18 in places with Covid-19 outbreaks to get the AstraZeneca vaccine, which carries an extremely low risk of blood clotting as a side effect.

Tens of thousands have taken up the offer but many have decided to wait for Pfizer, which is not as strongly linked to blood clots in young people.

Mr Morrison said young Australians would be able to book their Pfizer appointments at some point in the next week.

‘I want to stress, do not make a booking yet. We will advise when bookings can be made,’ he said.

‘It isn’t today. Not today. We will advise when the time will come over the course of the next week.’

Western Australia, South Australia and the Northern Territory are already offering Pfizer to people under 40 in their state-run clinics.

The expansion announced today means Pfizer will be available for young people in GPs which are regulated by the Commonwealth.

Over the last 24 hours, 309,010 Australians stepped forward to be vaccinated. As of Thursday 28.2 per cent of Australians over 16 have been fully jabbed.

Half of the nation has received at least one dose, which Mr Morrison described as a major milestone.