Coronavirus Australia: Sydney mum recalls the moment she found out her baby boy had Covid

A mother-of-three whose baby boy caught Covid-19 from a teacher at his childcare centre has revealed how the virus quickly ripped through her family, as she urged Sydneysiders to ‘follow the rules’ and stop it ‘spreading like wildfire’.

Ebony and partner Scott rushed their 16-month-old son Arthur to The Children’s Hospital at Westmead on Saturday after noticing he had had a runny nose and was burning up.

Their worst fears were confirmed via a NSW Health text message on Monday.

The toddler had caught the virus from his daycare teacher last Wednesday and had been infectious for close to a week.

Now Ebony fears the toddler could pass the virus onto the rest of the family, including his brothers Zachary, 6, and Lochlan, 15.

Her partner and eldest son have since developed ‘full-on’ symptoms including body aches, headaches and nausea.

Ebony, who is fully vaccinated, has already tested negative twice but will get tested a third time on Tuesday after developing soreness at the back of her throat.

Baby Arthur (pictured with mum Ebony) was still all smiles on Tuesday, despite developing a bad cough a day after he tested positive to Covid-19

Ebony said she was ‘devastated’ after learning her baby boy had Covid-19.

‘I had a rush of adrenaline as I was letting my family and workplace know,’ she told Daily Mail Australia.

‘It didn’t hit me until the kids were in bed later that night that this was real. There’s a sense of helplessness as there’s nothing you can do.

The family were still waiting for further advice from NSW Health when Arthur woke up with more worrying symptoms the next day.

‘He’s not too bad but he woke up with a croup cough, which has made everything a bit more real,’ she said.

‘I’m worried what will happen if he gets worse and ends up in hospital as it will split up the family.’

The family live in the Covid-ravaged Cumberland local government area, one of Sydney’s worst hit hotspots now living under strict new restrictions, including a night curfew and one hour daily exercise limit.

Arthur was among 753 new cases recorded in NSW in the 24 hours to 8pm Monday, after a bumper weekend with almost 500 of the new infections found in children.

His worrying infection comes amid repeated warnings that Covid-19 is rapidly spreading through entire households in the city’s west and south-west due to the high transmissibility of the Delta strain.

‘Clearly the picture with Delta is that once it’s introduced to a household, it’s inevitable that everyone gets the Delta strain,’ NSW Chief Health Officer Dr Kerry Chant said on Monday. 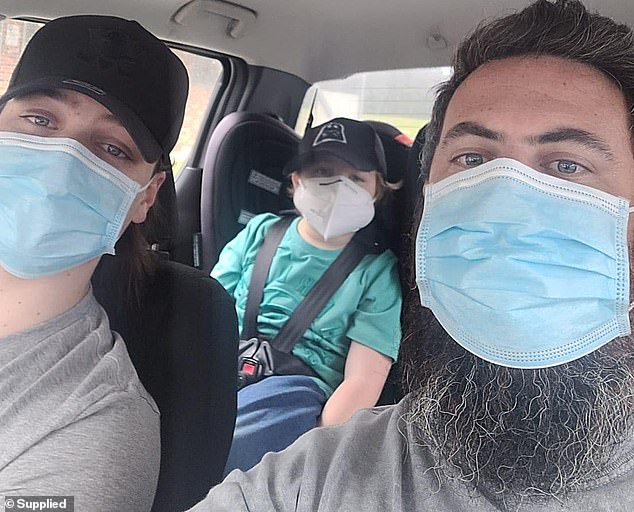 Her other sons Lochlan (left) and Zachary (back) and partner Scott got tested again on Monday after Arthur tested positive. Lochlan and Scott have since developed ‘full on’ symptoms 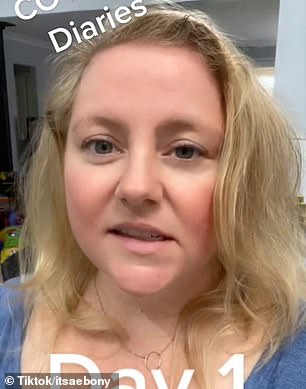 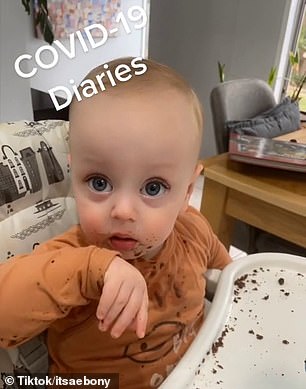 Ebony (left) has started posting a video diary of her baby son’s Covid-19 battle, as she suffers a sore throat despite two negative Covid tests

Arthur’s diagnosis has been a huge wake-up call for the family, who were already doing as much as they could to protect themselves.

‘I didn’t know anyone with Covid and was so far removed from it until it hit close to home,’ Ebony said.

‘We’re strict with our routine and stay home as much as we can, which has been a challenge.’

‘We go to the shops as little as possible. My partner works from home, our kids are being home-school and I was only going into work occasionally.’

Another case at Arthur’s daycare has since tested positive. It’s unknown whether they are a child or employee. 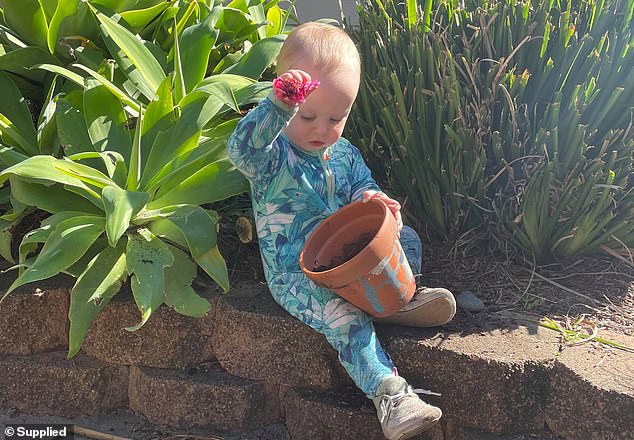 ‘They had a great Covid plan in place and have been very supportive, calling several times a day to check up on Arthur,’ she said.

She’s infuriated a minority continue flout the rules as the state’s outbreak continues to grow and issued an passionate plea.

‘The virus wouldn’t be spreading like wildfire and we wouldn’t be in this situation if everyone followed the rules.’

‘My message to everyone is please to stay at home.’

She added many are in the community while infectious due to the high workloads of the state’s contract tracers working tirelessly around the clock interviewing thousands of cases and their contacts.

‘We heard from the daycare on Friday but we weren’t notified by NSW Health to get tested and isolate until the Sunday,’ she said. 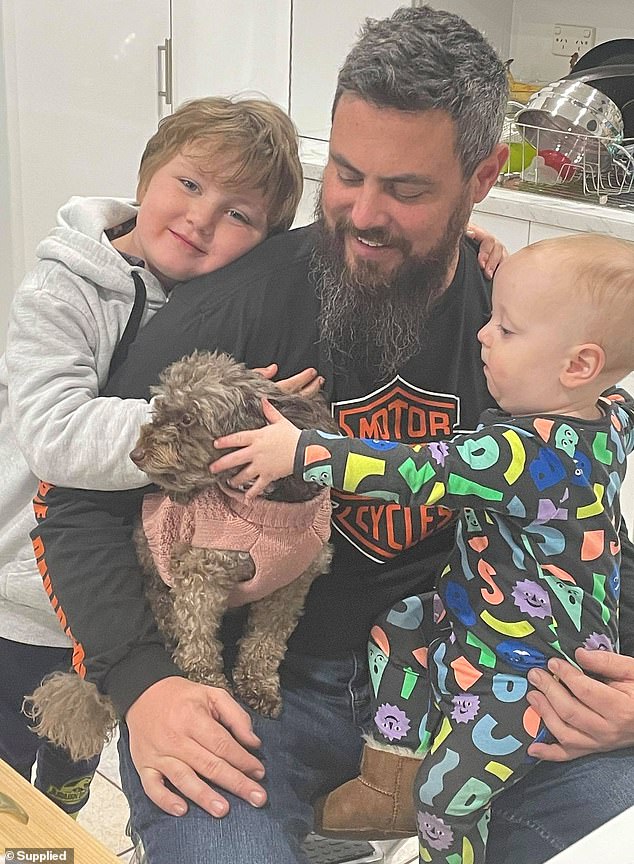 There are now fears Arthur will pass the virus onto his parents and brothers. He’s pictured with brother Zachary, dad Scott and Luna the dog 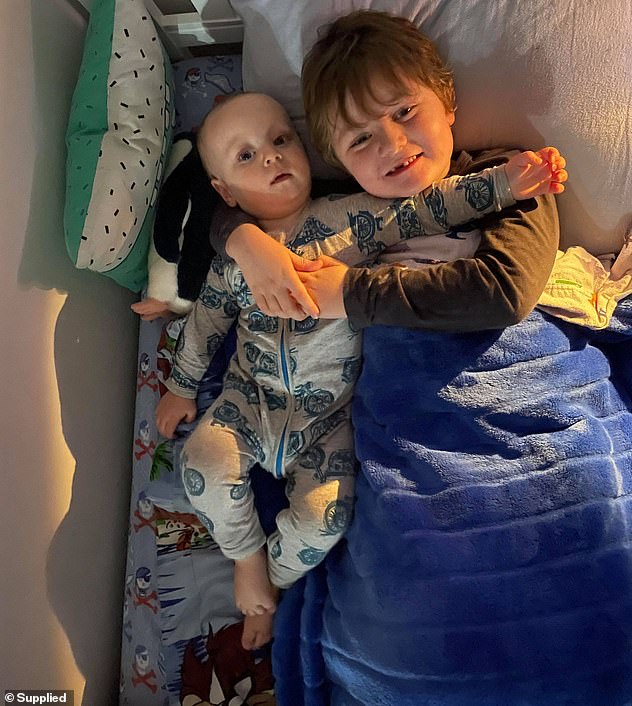 The shock Covid-19 diagnosis of Arthur (pictured with brother Zachary) has been a wake-up call for the family.

She hopes Covid jabs will eventually open up to children and plans to get her sons vaccinated as they become eligible.

Day one showed Arthur gurgling in his highchair happily eating a chocolate muffin and appeared to show no symptoms just hours after testing positive,

‘He had a high temperature and runny nose but he appears okay,’ his mum explained.

Despite developing a cough the following day, Arthur was still happy and eating on day two of his Covid-19 battle.

Ebony is grateful for the supportive message she’s been inundated with on her daily videos. 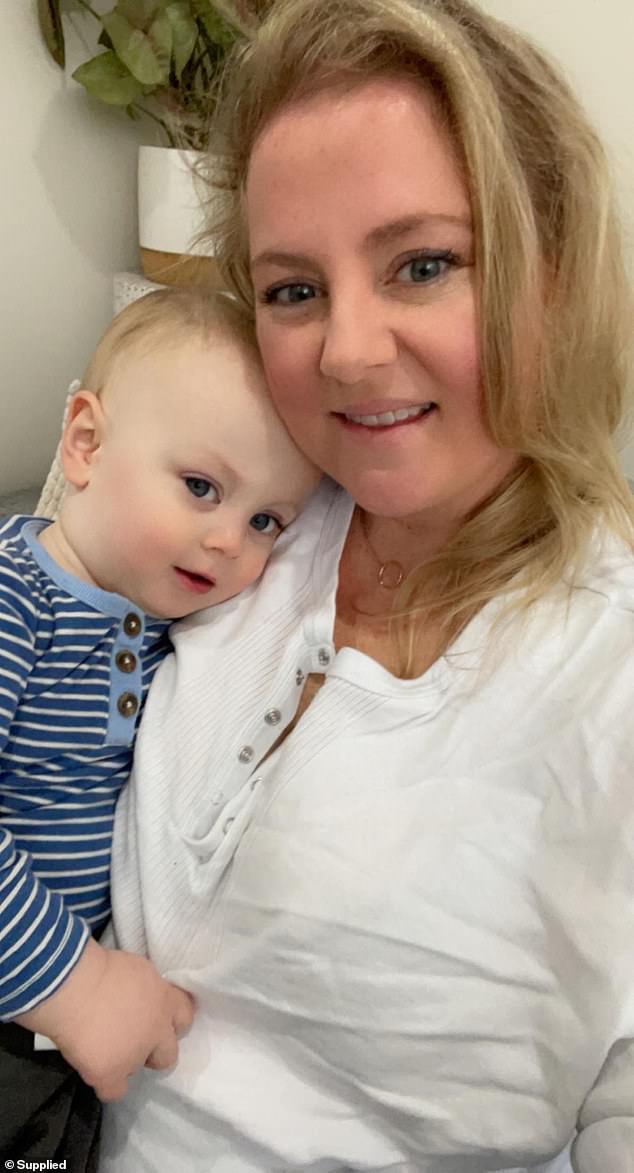 Ebony (pictured with her son on Tuesday) said the experience is ‘really, really scary’