Bollywood star Aishwarya Rai and her daughter have been hospitalised after testing positive for coronavirus.

The actress, 46, had been isolating at home with her little girl Aaradhya, eight, but is said to have gone to a Mumbai hospital after they both ‘developed breathlessness’, reports the Times Of India.

Just last Saturday, Aishwarya’s husband Abhishek Bachchan, 44, and her father-in-law Amitabh, 77, revealed they had Covid-19 and were in hospital.

Hospitalised: Aishwarya Rai, 46, has been admitted to a Mumbai hospital after she tested positive for coronavirus and isolated at home (pictured at the Cannes Film Festival in 2015)

Abhishek revealed his wife and daughter had tested positive in a tweet on Sunday, however he said they would be self-isolating at home.

Since then it is thought Aishwarya and Aaradhya stayed at the family’s home which was sealed by the Brihanmumbai Corporation, who Abhishek called the BMC in his tweet.

As well as their home, three other properties owned by the Bachchan family are also thought to have been locked down, reports news agency ANI.

Actor Amitabh, who is widely considered the King of Indian cinema, revealed he had tested positive for COVID-19 and was awaiting test results on Twitter last week. 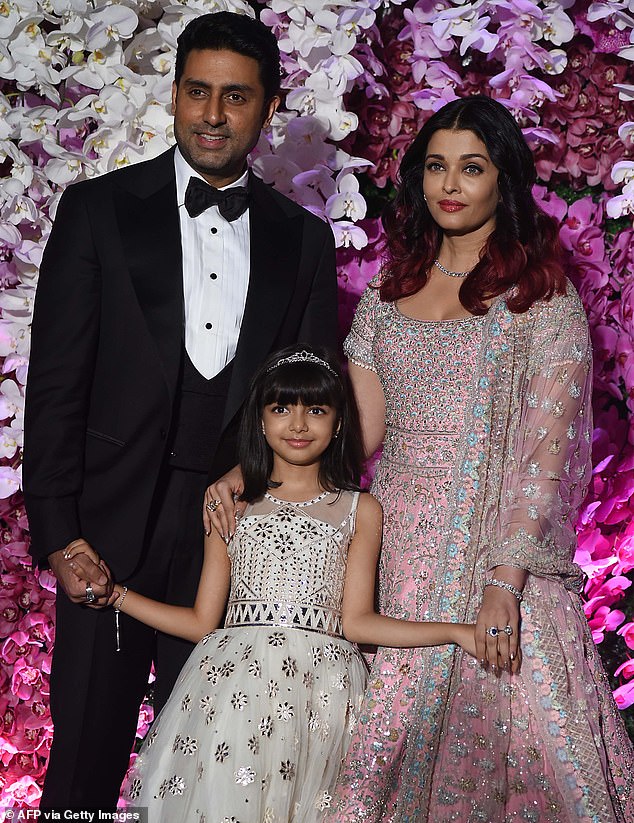 Family: The star’s eight-year-old daughter Aaradhya also tested positive for the virus and is now in hospital alongside her mother (also pictured is husband and father Abhishek Bachchan) 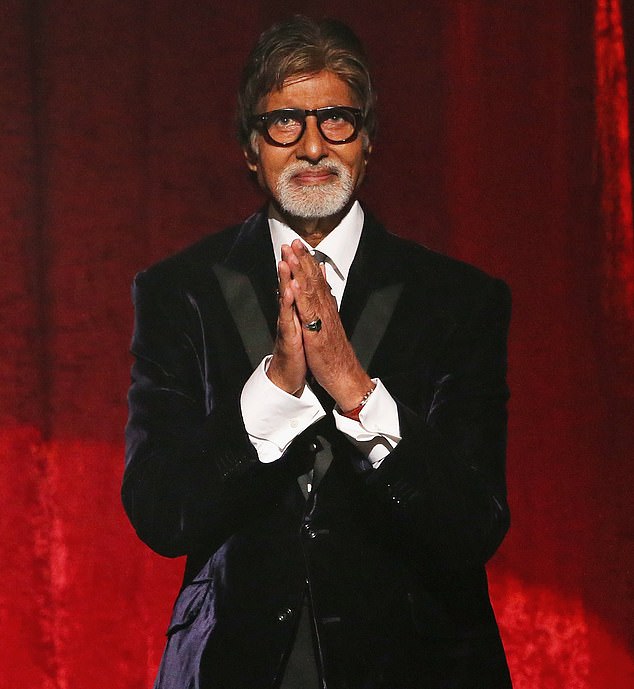 ‘All that have been in close proximity to me in the last 10 days are requested to please get themselves tested !’

Amitabh’s followers flooded his social media with their well wishes, hoping for a speedy recovery after he announced the diagnosis.

Following the announcement it was also revealed his son Abhishek had tested positive for coronavirus.

Tested positive: The actor, 77, revealed the news to his fans via Twitter on Saturday, sharing that he was awaiting tests following his hospitalisation 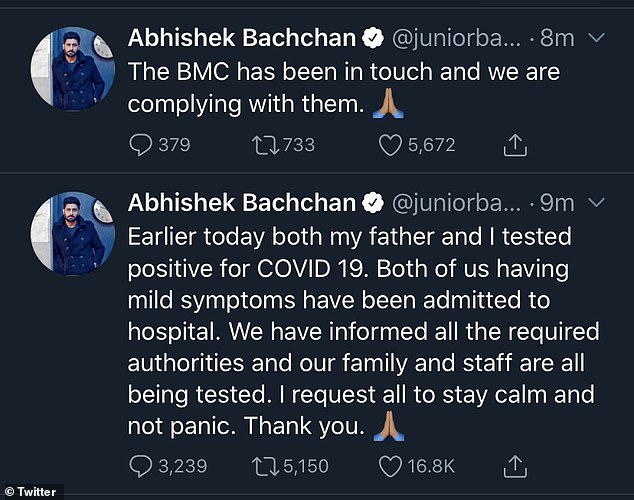 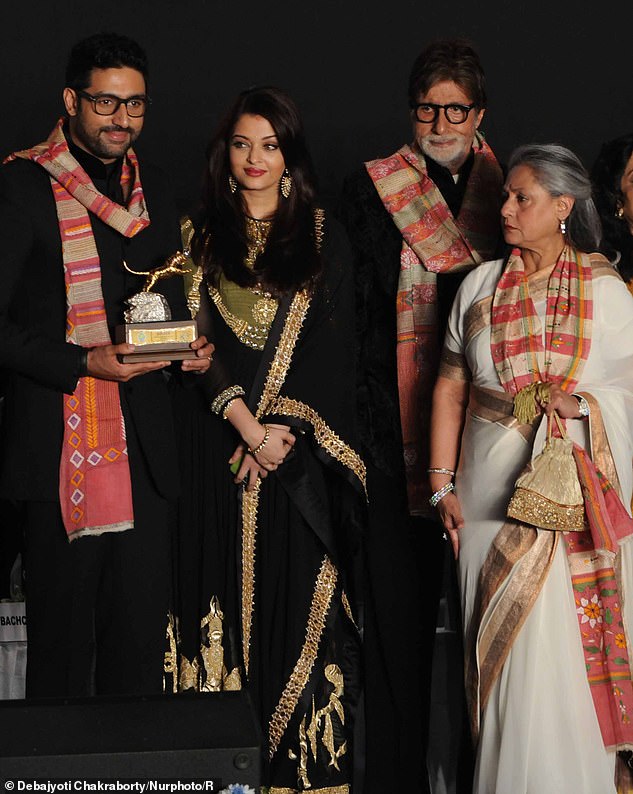 Abhishek wrote on Twitter: ‘Earlier today both my father and I tested positive for COVID 19. Both of us having mild symptoms have been admitted to hospital.

‘We have informed all the required authorities and our family and staff are all being tested. I request all to stay calm and not panic. Thank you.’

Abhishek followed in his mother and father’s film footsteps, making his debut as an actor in 2000 with war film Refugee before going on to star in over a dozen more films.

He met his wife Aishwarya Rai on the set of Dhoom 2, three years after calling off his engagement with actress Karisma Kapoor, and the pair wed in 2007.

‘Thank you for all your wishes’: Abhishek told his followers about his wife Aishwarya and daughter’s condition on Sunday 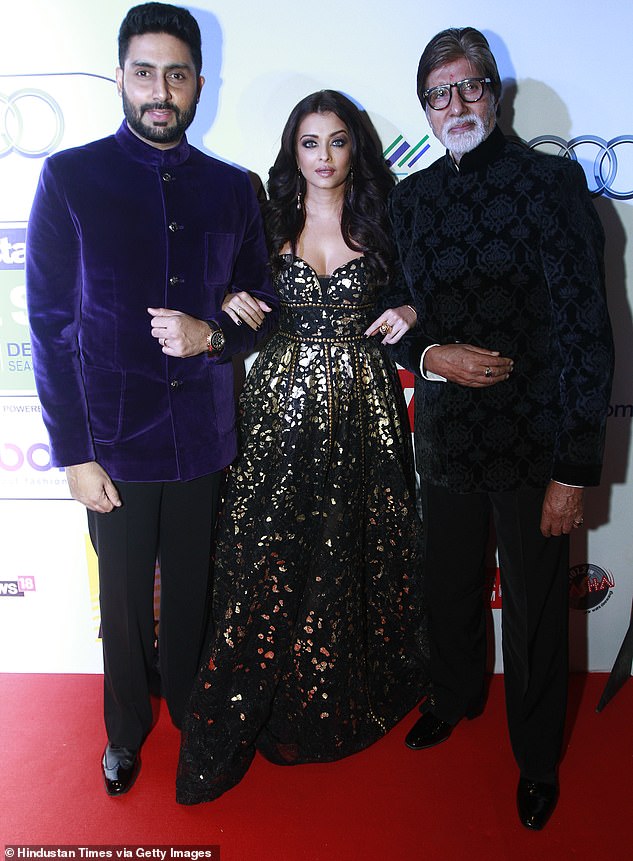 In the family: Abhishek (pictured with his father and wife Aishwarya Rai) followed in his mother and father’s footsteps, making his debut as an actor in 2000 with war film Refugee

Aishwarya Rai, who shares a daughter with Abhishek, is also a prominent actress in India after she began acting following her win as Miss World 1994.

Her father-in-law Amitabh is married to actress, and current Member of Parliament, Jaya Bachchan (nee Bhaduri), the pair wed in 1973 and they share daughter Shweta and their son. Jaya has not tested positive for coronavirus.

He rose to fame in the 1970s with films like Zanjeer and Sholay, and has been lovingly called ‘Big B’ and the ‘Star of the Millennium’ by fans. 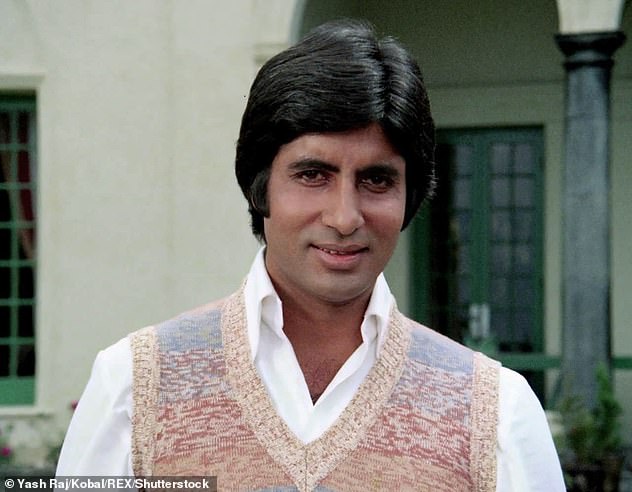 Icon: The Indian star rose to fame in the 1970s with films like Zanjeer and Sholay, and has been lovingly called the ‘Star of the Millennium’ by fans (pictured in 1976 film Kabhi Kabhie)

Widely seen as the King of Indian cinema, Amitabh has appeared in 200 films over the course of his career, which has spanned over five decades.

Amitabh’s work has earned him a number of accolades over the years, including four National Film Awards and a Lifetime Achievement Award for his contribution to Bollywood cinema.

The Shahenshah star was honoured with a Padma Shri in 1984, a Padma Bhushan in 2001, and the Padma Vibhushan in 2015, some of the highest civilian awards to be provided by the Government of India.

Amitabh’s filmography doesn’t stop in Bollywood, as the actor also made his Hollywood debut in Baz Luhrmann’s The Great Gatsby. 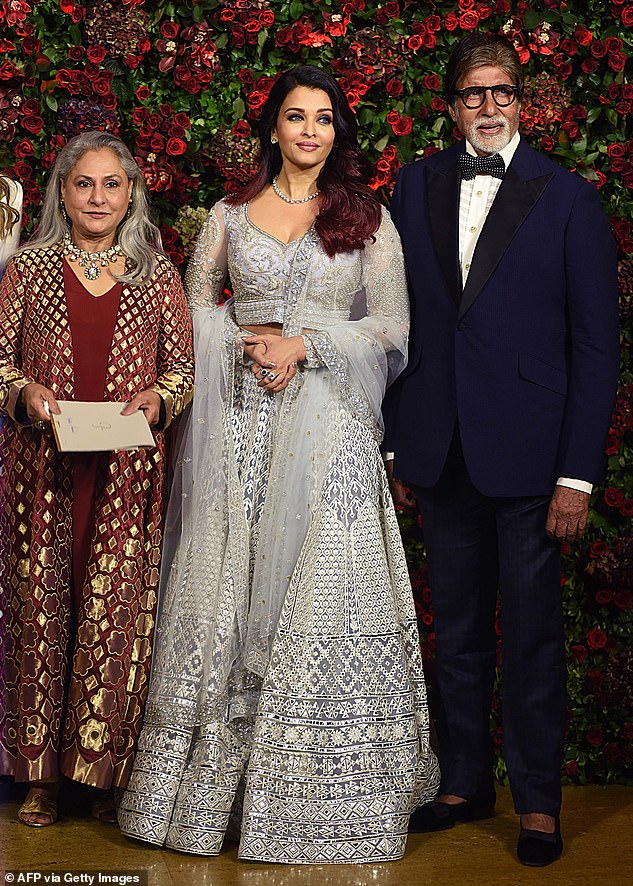 Family: Amitabh is married to actress, and current Member of Parliament, Jaya Bachchan (nee Bhaduri), they wed in 1973 after appearing in Zanjeer (pictured in 2018 with Aishwarya Rai)

In 1982 Amitabh suffered a near-fatal injury while filming Coolie. The actor had been doing his own stunts and got a splenic rupture following a jump that went wrong.

He had to have an emergency splenectomy after the injury, and remained in a critical condition for several months before finally making a recovery.

Amitabh went into semi-retirement in 1992, becoming a producer during the five year break before his return to the silver screen in the late 1990s.

The actor rose to prominence once again in the 2000s with several commercially successful films, and he has also appeared on TV and done voice-acting work. 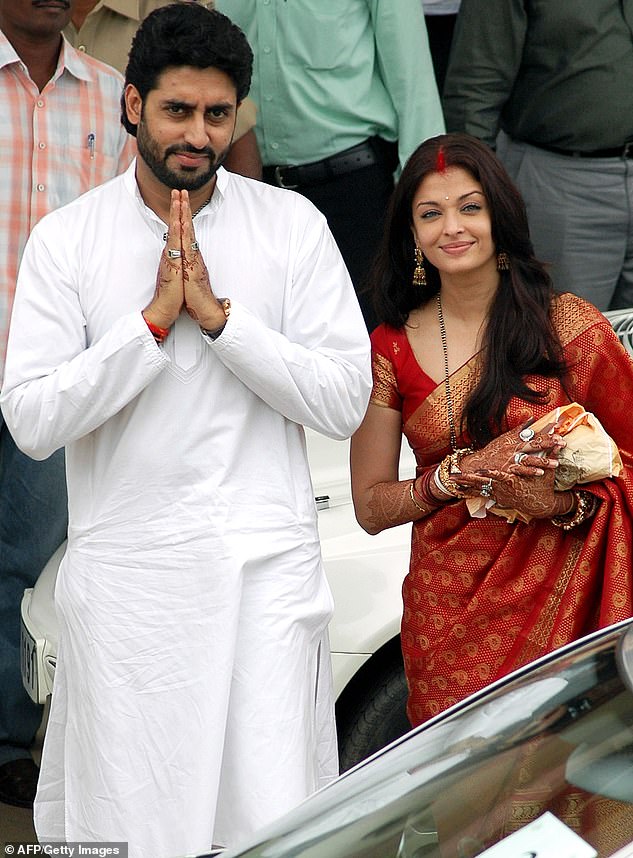 Huge star: Aishwarya, who shares a daughter with Abhishek, is also a prominent actress in India after she began acting following her win as Miss World 1994 (pictured in 2007)