Coronavirus infections are soaring twice as quickly in the most well-off districts of the country, compared to the poorest zones of towns and cities — which faced the worst of the first wave.

And the Office for National Statistics data shows rates are also spiralling across the country for white people under the age of 35. But Covid-19 cases are not going up among young people of different ethnicities.

The report — based on tens of thousands of random swab tests carried out since the end of July — also showed that  travellers and holidaymakers returning from abroad are more likely to have tested positive for the coronavirus. It implies they caught Covid-19 on holiday but experts did not address whether it was a coincidence because those people took more risks in day-to-day life.

Socialising was directly linked to spreading the virus, with people who had met up with more friends during the six-week period of the study more likely to test positive, even if they claimed to have maintained social distancing.

One expert said: ‘The take home message is that total numbers of social contacts still need to be limited to control the virus.’

The report, which splits the population into quintiles (fifths) based on how deprived or wealthy they are, found that people in the least deprived areas were seeing rates of infection rise sharper than any other groups 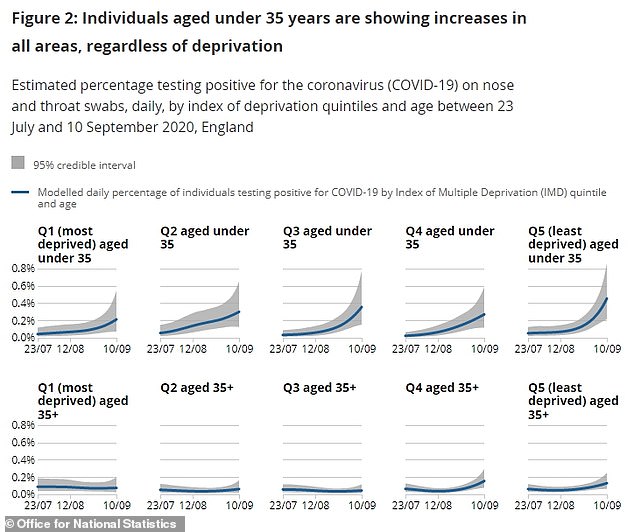 The report added that, overall, people of Asian ethnicity are most likely to have had coronavirus at some point in the past – rates of antibody-positive blood tests are 2.7 times higher than in white people.

The ONS report, released yesterday, considered people who tested positive for Covid-19 between July 23 and September 10, and looked at information about who was taking the tests.

During that time, 61,617 people across the entire UK officially tested positive, according to the Department of Health.

Those tests were taken as part of a surveillance study, separate from the official testing programme, which regularly swabs a representative sample of the English population regardless of whether they have symptoms.

The ‘quintiles’ are five groups that the population is divided into based on their deprivation, which is usually an indicator of how wealthy their home area is.

It added: ‘We see similar effects whether we adjust for the fact that positivity rates are increasing at different rates in different regions or not.

‘More deprived areas may have also seen small increases, but due to the wide credible intervals we cannot be certain.’

The data showed that, by September 10, 0.11 per cent of people in the most deprived areas (one in 910 people) were testing positive for coronavirus.

Meanwhile in the least deprived area, the infection rate was almost double at 0.21 per cent – one in every 480.

And in the middle groups the rate of infection rose as people’s deprivation fell – with 0.19 per cent in second richest group and 0.13 per cent in the third and fourth.

Deprivation, the ONS said, is judged on the average income in an area and also job availability, quality of education, crime rates, housing and the natural environment.

The most deprived areas tend to be in inner city boroughs or industrial towns, often in the Midlands or North of England.

Poorer areas faced the worst of the outbreak for months, with inner city boroughs in London and Birmingham badly affected in the first wave and places such as Leicester, Bolton and Sunderland hit by local lockdowns.

Those less well-off populations, which tended to include large proportions of ethnic minority people, were found to be catching the virus earlier in the year because they were more likely to work in public-facing jobs and to take public transport.

Another key finding of the ONS’s report was the stark difference between the speed at which coronavirus infections are rising in under-35s compared to over-35s.

More than 0.4 per cent of under-35s in the richest areas were testing positive each day by September 10, the data showed – one in every 250 people.

The positivity rate – the proportion of people tested who test positive – fell for less well-off groups but was still significantly higher than it was for people in the older age group. 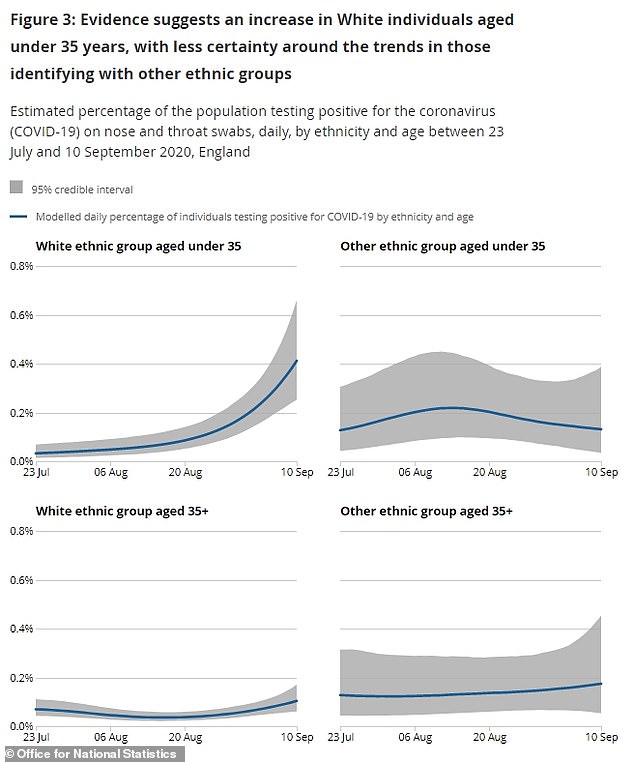 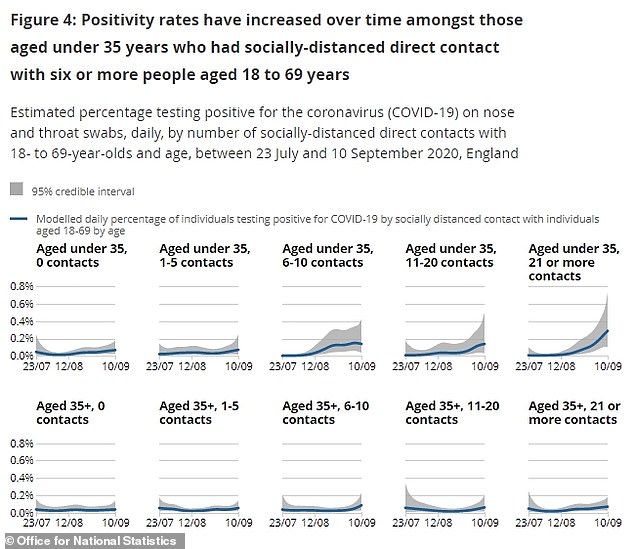 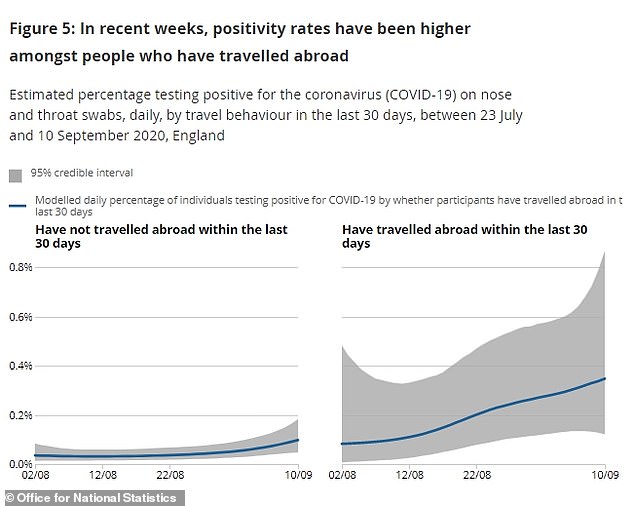 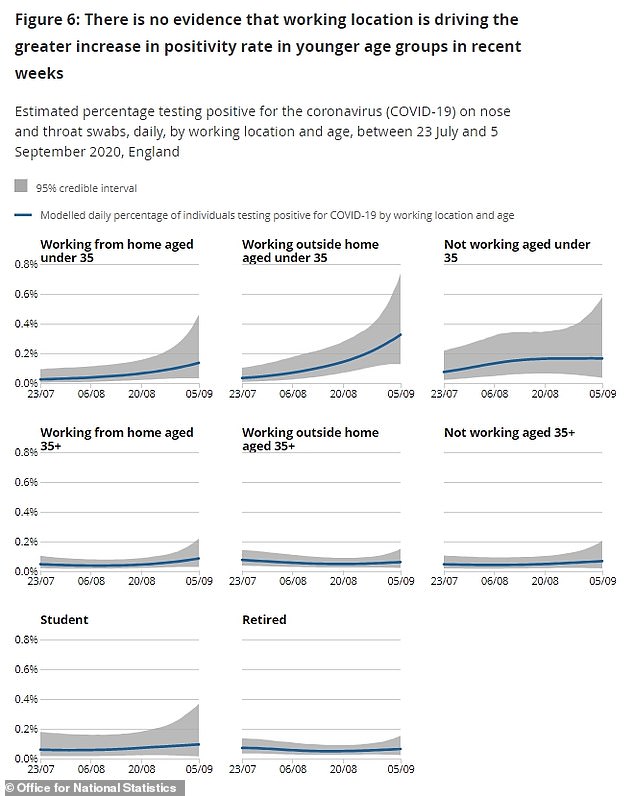 The highest rate of infection for over-35s was less than half – lower than 0.2 per cent – in the wealthiest group.

And it appears to be white people who were testing positive most often.

White under-35s returned a daily positive rate of 0.41 per cent in the most recent date – September 10 – compared to 0.13 per cent among people in other ethnic groups.

The opposite was true for older generations, who had a sickness rate of 0.11 per cent among white people and 0.18 per cent in non-white people.

‘However, rates in white individuals aged 35 years and over have also increased slightly in the most recent weeks compared with a low point in August.

‘Due to small numbers, the credible intervals are wide in ethnic minority groups; therefore, we cannot say how positivity rates have varied over time for these groups.

‘However, there is no evidence that recent overall increases in positivity are predominantly due to increases in those from other ethnic groups.’

The report also directly linked socialising to the risk of testing positive for Covid-19.

Covid-19 test positivity rates have increased for people under 35 who had socially-distanced contact with at least six people aged between 18 and 69 over the previous week, it said.

The analysis asked people how many people outside their own household they had socially-distanced contact with during the previous seven days.

The ONS noted that interpretations of socially-distanced contact may vary between participants.

Its findings suggest that ‘reporting having had socially-distanced direct contact with a larger number of people appears to be an increasingly important factor in increasing positivity rates in the younger age groups’.

On September 14, the rule of six was introduced, limiting the number of people who can gather to a maximum of six individuals.

Dr Daniel Lawson, a lecturer in statistical science at the University of Bristol, said: ‘These results robustly show rising infection rates are focussed on a subset of the population, younger, wealthier, white people.

‘Whilst current infections are highest in this demographic, historical infection rates from antibody tests show that black and Asian people have also been widely infected earlier in the pandemic.

‘The current increase associates with number of social contacts and international travel. This all fits a picture that, on average, younger, wealthier, white people had more social contacts over the summer.

‘This survey period included the relaxation of restrictions in pubs and restaurants, where the population was encouraged to spend whilst meeting in public venues.

‘The take home message is that total numbers of social contacts still need to be limited to control the virus.’

More than 17million Britons in 48 towns, cities and boroughs are currently living with even more limited freedoms than the rest of the country.

Many have been barred from meeting friends or family indoors and university students in the locked-down areas are practically confined to their halls of residence.

Residents in these places have been told the rules are essential to suppress the virus, but data shows that Luton is the only area which has successfully managed to drive down cases far enough for the draconian rules to be lifted.

Stockport and Wigan also managed to break free from the shackles of local lockdowns but had measures reimposed on Friday after infections rebounded. The other 46 regions in lockdown are all recording rises in infections, according to the latest Government data.

Bolton is still Britain’s Covid-19 hotspot after suffering more than 200 cases per 100,000 in the last week. Cases have more than tripled in the last three weeks, despite the Greater Manchester town going into a local lockdown earlier this month.

The data is worrying because it implies the nationwide measures announced last week – including the ‘rule of six’ and 10pm curfew – do little to stop coronavirus’s spread, at the expense of restricting people’s freedoms and obliterating the economy. 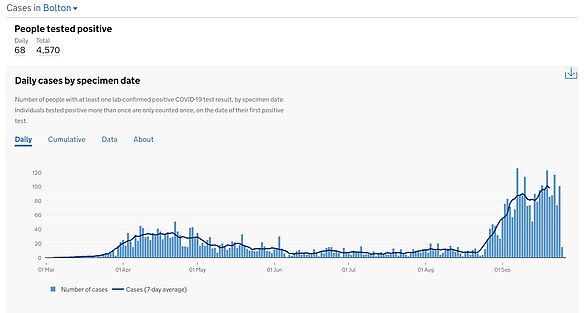 Bolton was this week named as Britain’s Covid-19 hotspot after suffering more than 200 cases per 100,000 in the last week. Cases have more than tripled in the last three weeks despite the Greater Manchester town going into a local lockdown earlier this month 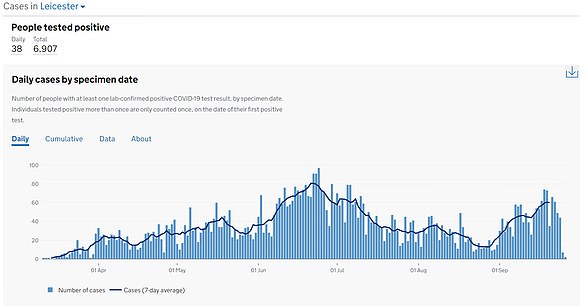 Leicester – which was the first in the UK to be put in a local lockdown in July – recorded 94 cases per 100,000 in the week ending September 25, up from 37 the previous seven days 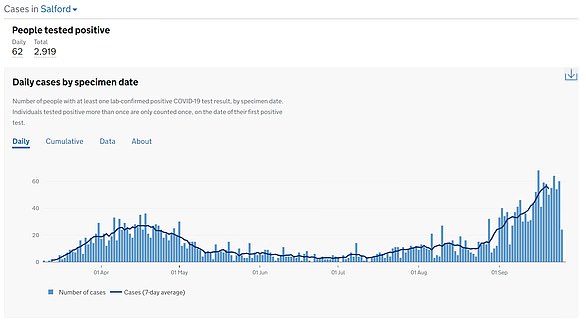