Coronavirus England and Wales: Deaths rose 40% at start of November

The number of people dying with Covid-19 rose by 40 per cent in the first week of November, when the virus was to blame for one in every six deaths in England and Wales and killed more people than at any time since May.

A weekly report by the Office for National Statistics showed 1,937 people died between October 31 and November 6 and had coronavirus mentioned on their death certificate, up from 1,379 the week before. The week before that had also seen a 40 per cent increase in deaths.

ONS experts found that deaths of all causes are now above average in every region of England except for London, where they are on par with normal for this time of the year. London deaths were still below average last week.

Today’s update shows 1,481 people more than usual died in the first week of November, meaning ‘excess deaths’ pushed the total 14.3 per cent higher than would be expected for this time of year.

Deaths have now risen for nine weeks in a row and the most fatalities are being recorded in the North West of England, which saw 419 more people die than usual – an increase of 31.4 per cent.

The region, which includes Liverpool and Manchester, has borne the brunt of England’s second wave of coronavirus and, although infections there are now declining, deaths will continue to rise as records catch up with people who were infected weeks or even months ago. It takes an average of two or three weeks to die after getting infected.

Excess deaths – the number of fatalities that would not usually be expected at this time of year – was significantly lower in other regions, at 273 in Yorkshire and the Humber, 207 in Wales and fewer than 150 in all other parts of the country.

Deaths involving Covid-19 are still being outstripped by those among people who have flu or pneumonia – 1,937 in the latest week, compared to 2,267 – but the gap is narrowing rapidly. While there were over 1,000 more deaths related to Covid than flu in every week in September, that difference had plummeted to just 330 by the start of this month. 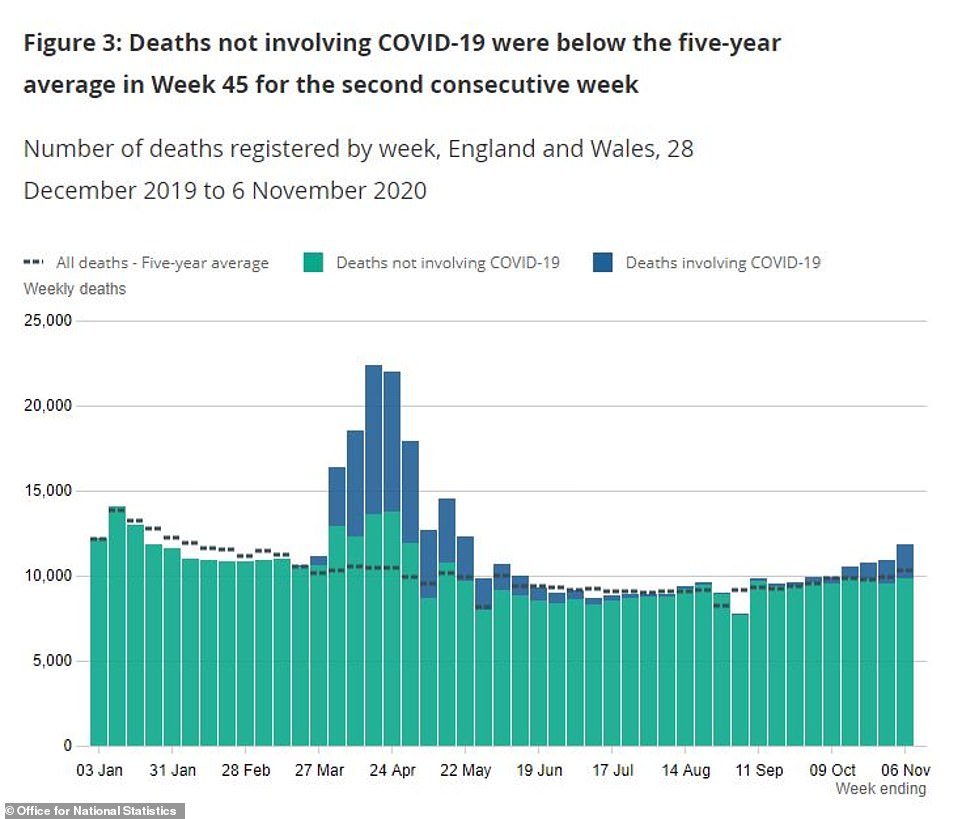 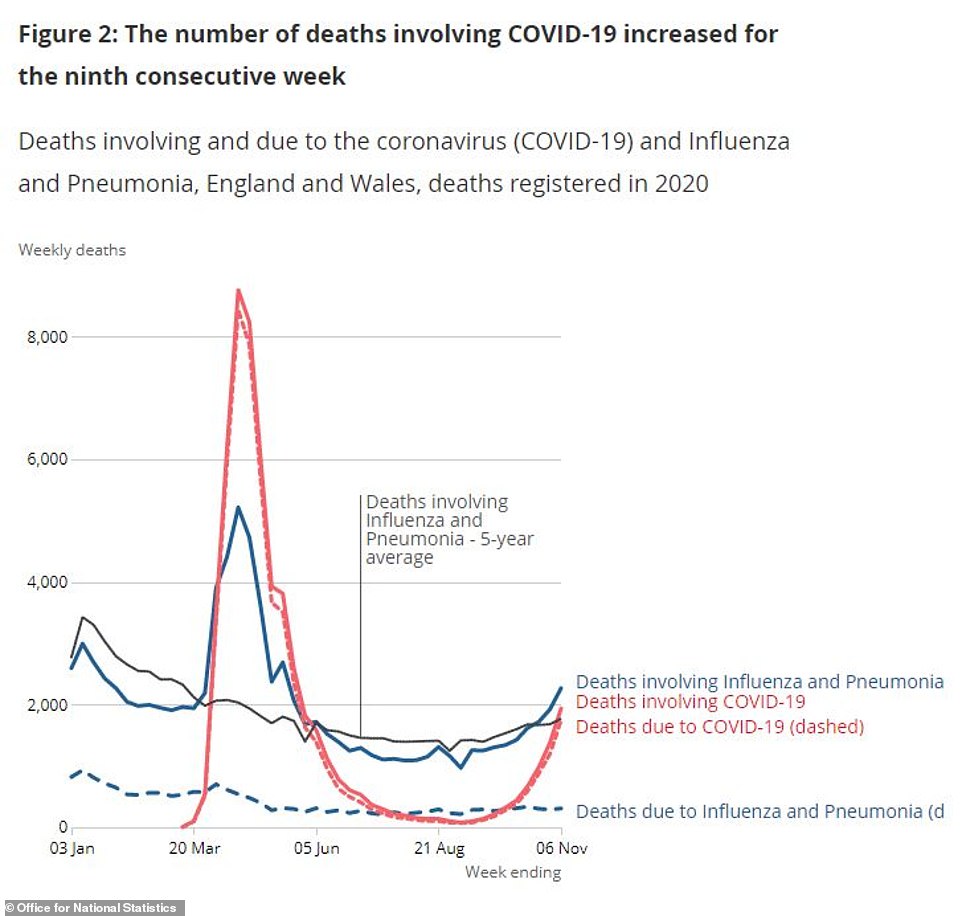 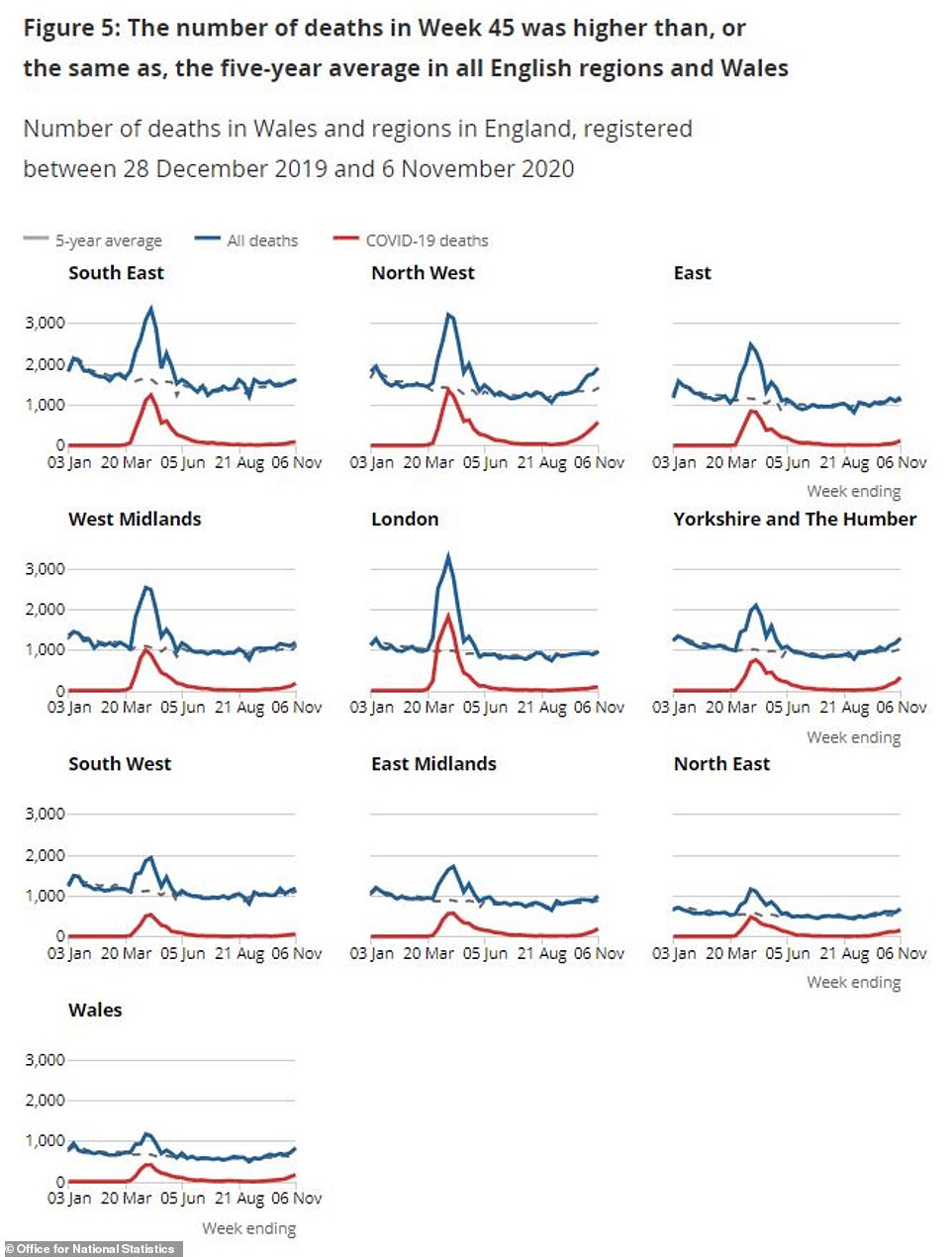 The ONS’s report showed that deaths of all causes are now higher than average in all mainstream settings – in hospitals, care homes and private homes.

Hospitals account for more than 80 per cent of coronavirus deaths – a total of 1,109 out of 1,937 in the first week of November.

The number of people dying with coronavirus has now risen every week since September 4, when school and university terms across the country restarted for 2020-21.

WHERE ARE PANDEMIC DEATHS THE HIGHEST?

Office for National Statistics figures show that there are more excess deaths happening in North West England than any other region.

Data for the seven days between October 31 and November 6 shows:

Deaths of any cause during that week

Cases started to surge in September and deaths have followed suit after falling to a low of 78 – an average of just one per day – in the week that ended September 4.

The figure for the week up to November 6 (1,937) is the largest number of people to have died with coronavirus since the week of May 22, when 2,589 people died.

At the peak of the crisis the number of deaths skyrocketed to more than 8,000 per week, peaking at 8,758 in the week that ended April 17.  Experts do not expect this second wave to hit such devastating levels.

Estimates of the number of infections published by the ONS – most recently 47,700 per day projected last Friday – suggest the coronavirus outbreak in England ‘remains at about 50,000 new cases per day’.

Commenting at the start of this month when the ONS suggested infections had stabilised at that level, Oxford University biologist Professor James Naismith said that, if that was the peak of the second wave, he would not expect the death count to rise above 1,000 per day ‘for any prolonged period’, but that it was ‘very likely’ that it would be above 500 a day for a while.

The Department of Health’s daily count of deaths – which announces deaths from records dating back over the past week – is currently at an average of 416 per day, with 213 confirmed yesterday.

Today’s ONS report puts the total number of people to have died with Covid-19 in England and Wales throughout the whole pandemic at 59,549 up to November 6.

This includes anyone who has the virus mentioned on their death certificate, including people who never got tested or diagnosed, which makes it higher than the Department of Health’s counted 52,147, which only includes people who died within four weeks of an official positive test result.

ONS data also shows that considerably more people than normal are dying in private homes, which has concerned scientists.

A total of 113,364 people died in private residences between March and November, this week’s release showed, which was 32,681 more than in a normal year.

Experts say that this was to be expected at the start of the pandemic, when NHS hospitals had to turf out patients to make space for people with Covid-19, but it has remained higher than average for the entire year. 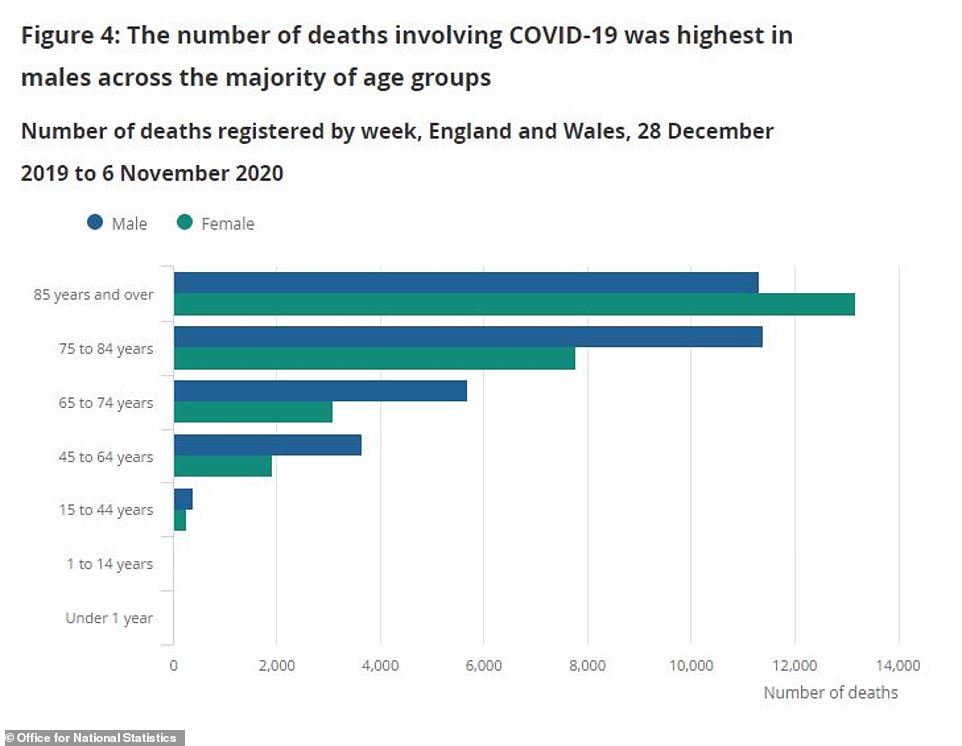 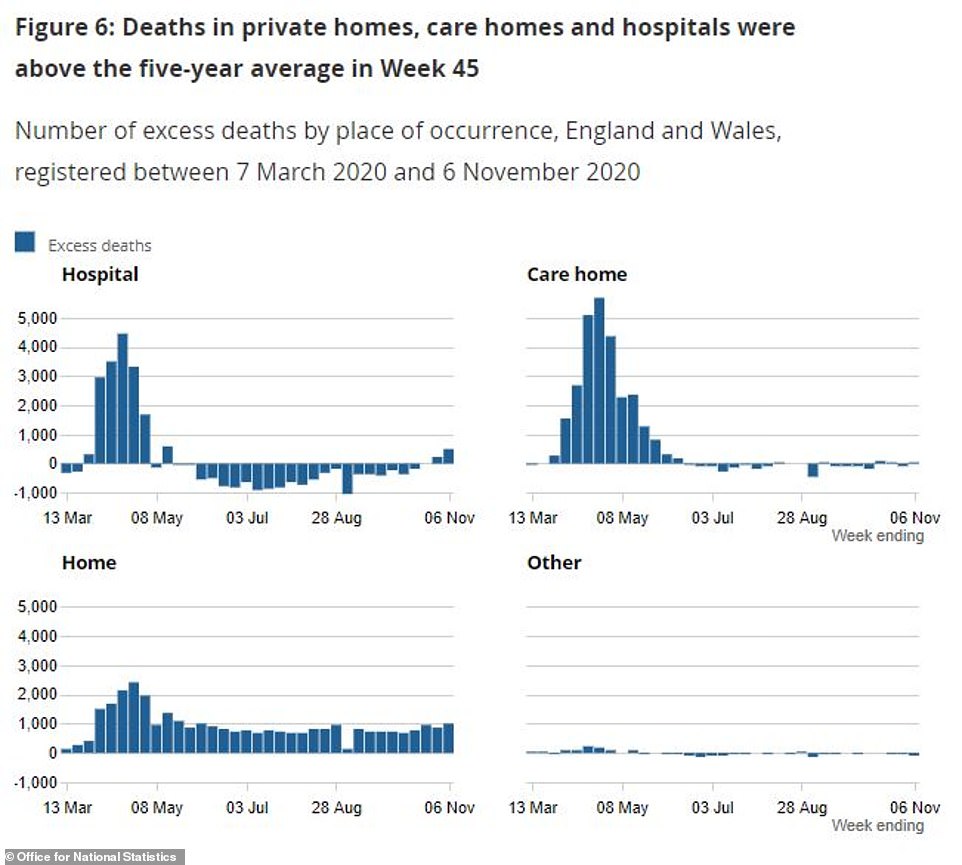 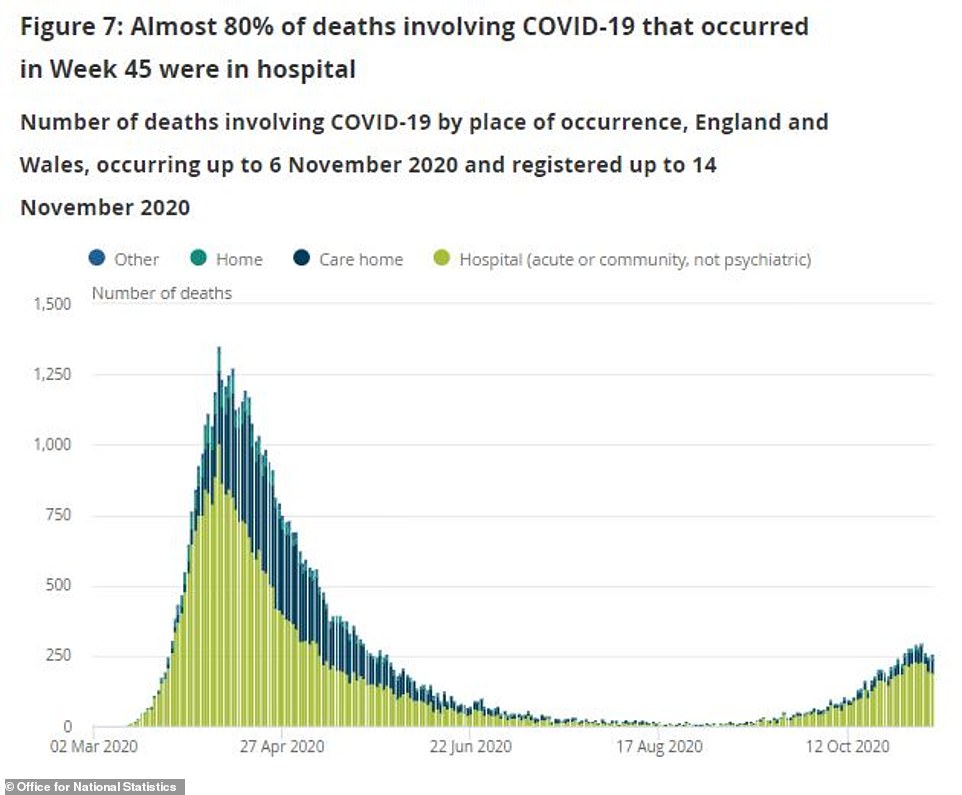 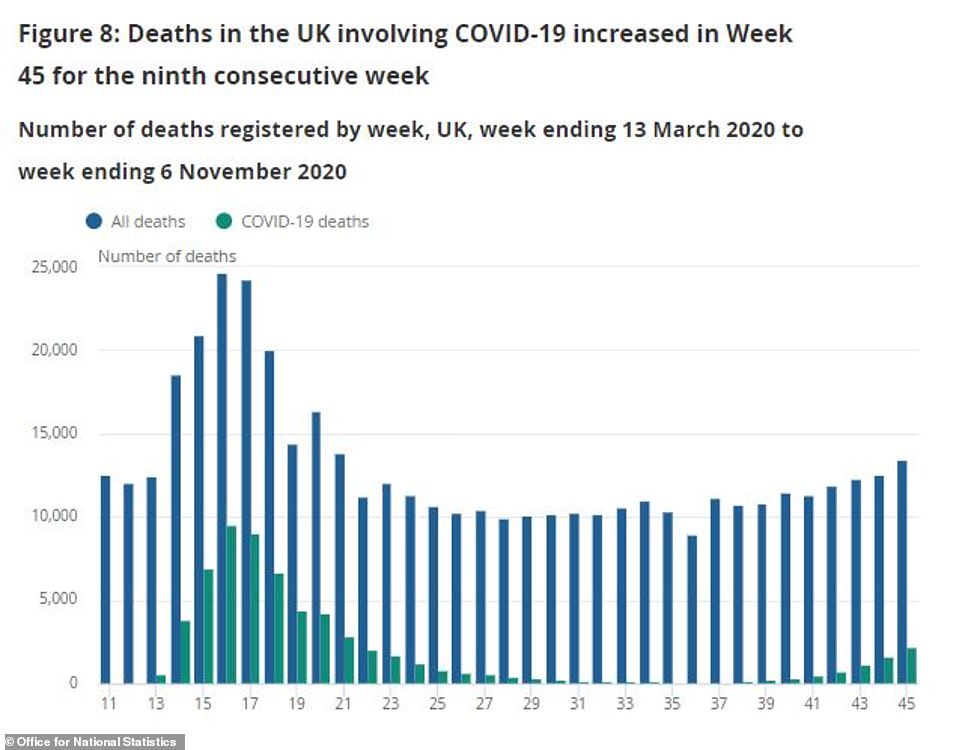 They fear that people may be avoiding healthcare because they’re scared of coronavirus, and either not getting life-prolonging treatment or dying without pain relief that they would be given in a hospital.

Professor David Spiegelhalter, a statistician at the University of Cambridge, said today: ‘Usually around 2,500 people die at home each week at this time of year – now it is 3,500.

‘That is 1,000 more, an extra 40 per cent. These extra home deaths, very few of which are from Covid, have continued since March.

‘It would be very good to know the quality of end-of-life care being received, and how many of these deaths might have been delayed through, for example, more rapid treatment of heart attacks and strokes.

‘When we look at the main underlying cause of death in England and Wales that week, there were 1,743 deaths for which it was Covid-19, compared to 307 as influenza or pneumonia. And usually only a small proportion of deaths from ‘influenza and pneumonia’ are from flu itself, and so Covid is definitely not in the least like flu.’