Coronavirus is ‘back with full force’ in Germany, state premier says

Covid-19 is ‘back with full force’ in Germany, the state premier of Bavaria said today while the Czech Republic ordered a partial lockdown and France expands its curfews as the second wave worsens across Europe.

One Alpine district in Germany is already back in lockdown and Bavarian leader Markus Soeder warned today that the virus is in danger spinning out of control in the country.

While Germany’s infection rate is lower than in much of Europe, it has risen sharply to more than 6,500 cases per day, and the closely-watched R rate has been constantly above 1 for more than two weeks.

Czech leaders are curbing movement and closing shops after the prime minister admitted that ‘the measures we have taken so far have failed to flatten the growth curve’ in the country with the highest infection rate in Europe.

The nightly French curfews which already apply to 20million people are set to be extended to more regions after the number of virus patients in intensive care went above 2,000 on Monday for the first time since May.

Italy is also urging people to stay at home again and set a new unwanted record of 15,199 cases today along with 127 deaths, the first three-figure jump since May 30.

Meanwhile Russia saw more than 300 deaths in a day for the first time and Belgium is having to cut back testing for asymptomatic people because of a shortage of test equipment.

The Czech Republic has the highest infection rate in Europe and is imposing new curbs on movement in a bid to bring numbers down, while France, Spain and Italy are also seeing their numbers continue to rise 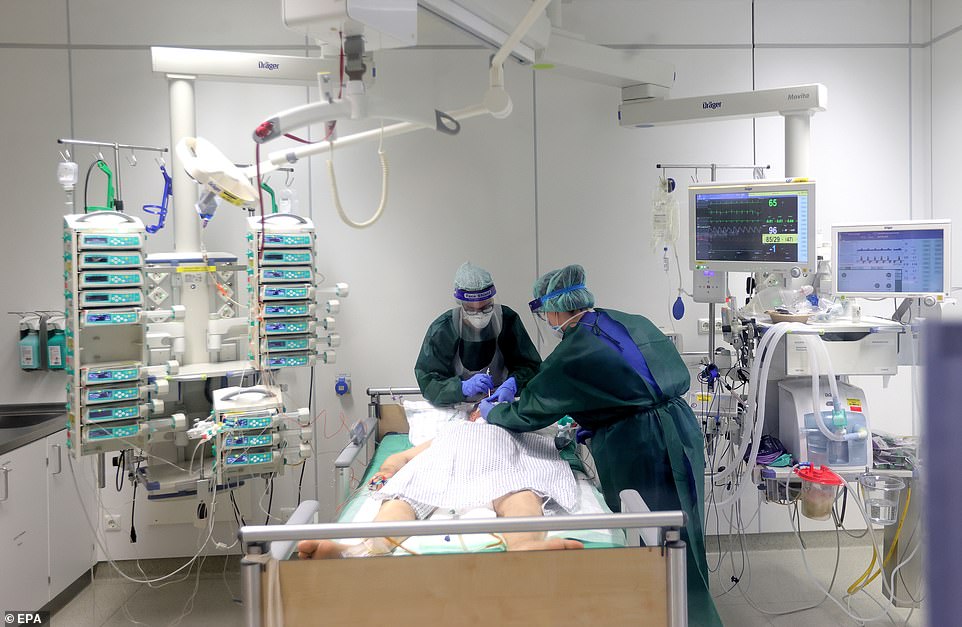 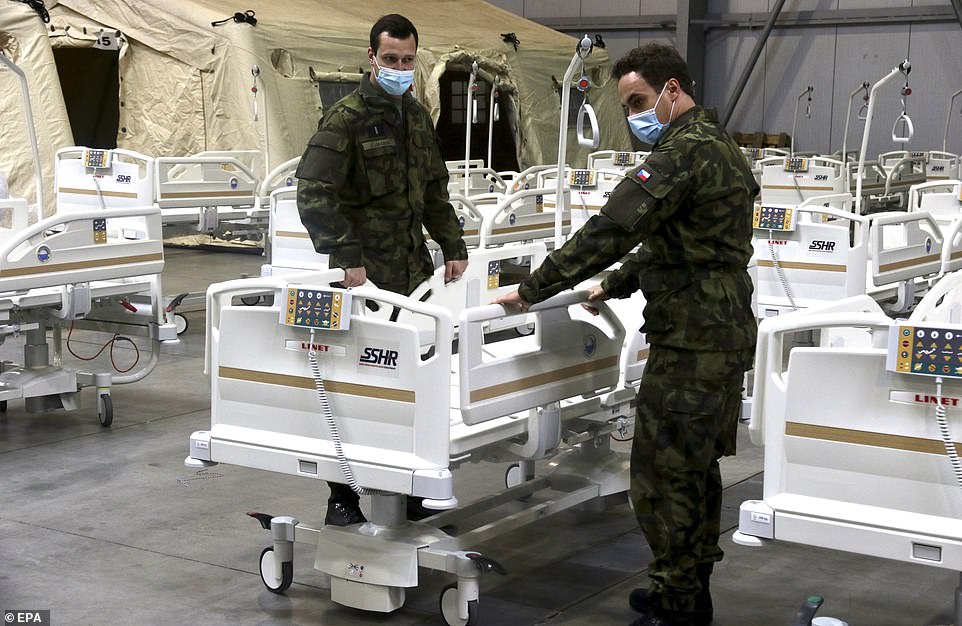 CZECH REPUBLIC: Czech army soldiers move a hospital bed as the military is called in to prepare an emergency healthcare facility at an exhibition ground in the suburbs of Prague today 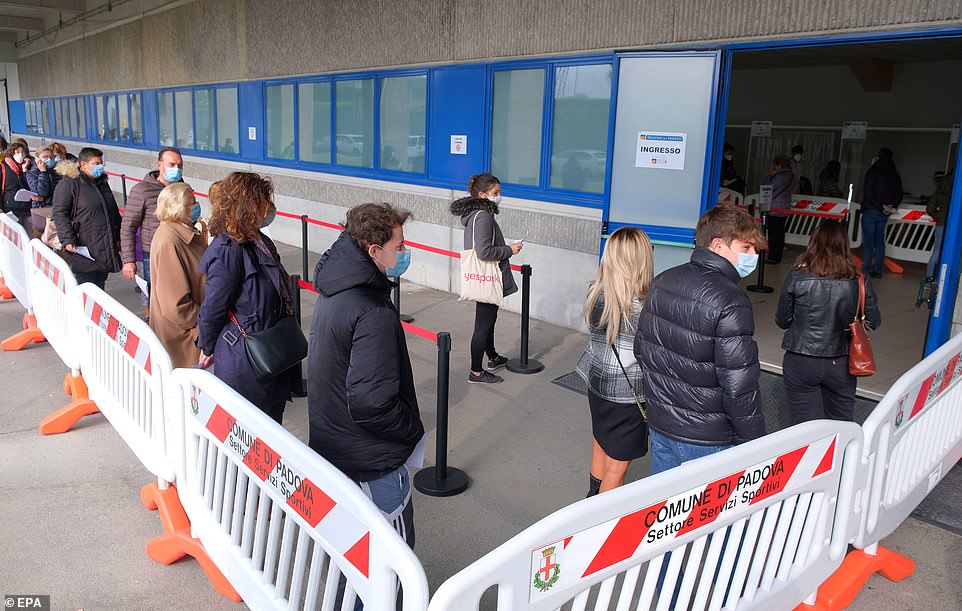 ITALY: People wearing masks queue to get tested at a stadium in Padua in northern Italy today with cases rising sharply and the government telling people to avoid unnecessary movements again

In the Czech Republic, people will be ordered to stay at home under new measures taking effect on Thursday – although the list of exceptions is longer than in Europe’s toughest spring lockdowns.

People will still be allowed to travel to work, do business, visit relatives, buy food and other necessities, do sports and travel abroad.

‘Those measures are in our view inevitable,’ said Czech health minister Roman Prymula, a trained epidemiologist. ‘To limit free movement of people is the most effective form of prevention.’

Prymula said the government would also close all retail outlets except food shops, drugstores and pharmacies from Thursday morning until November 3.

Data updated on Tuesday showed the Czech Republic had by far the most new cases and deaths per 100,000 inhabitants over the last two weeks in the EU.

‘The growth is huge and the measures we have taken so far have failed to flatten the growth curve,’ prime minister Andrej Babis told reporters.

‘We made errors, probably yes, I can apologise again to all,’ he said. ‘At the moment it looks very bad, but I am convinced that these measures should work.’

Babis apologised for the measures but said that if they were not taken, ‘our health system would collapse between November 7-11.’

To battle the second wave, the Czech government has already ordered people to wear face masks in most places and closed schools, restaurants, bars, cinemas, theatres, museums and swimming pools across the country.

Babis added the country was running out of hospital capacity and that it had asked for help abroad. ‘We will have about 28 American doctors coming over,’ he said.

The government has also ordered almost 2,000 hospital beds, some of which will be used in a field hospital on the outskirts of Prague, currently under construction. 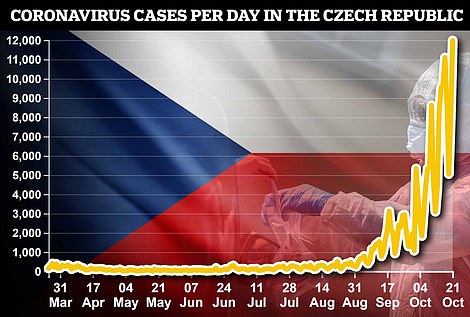 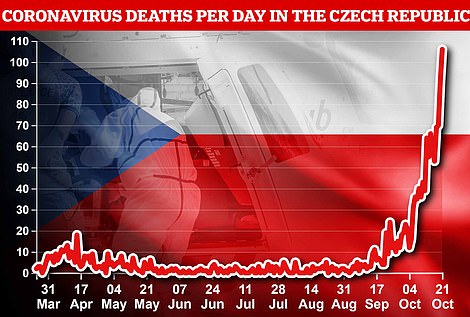 CZECH REPUBLIC: The Czech prime minister admitted that the government’s measures have failed to stem the second wave after cases and deaths rose far above the levels seen in the spring 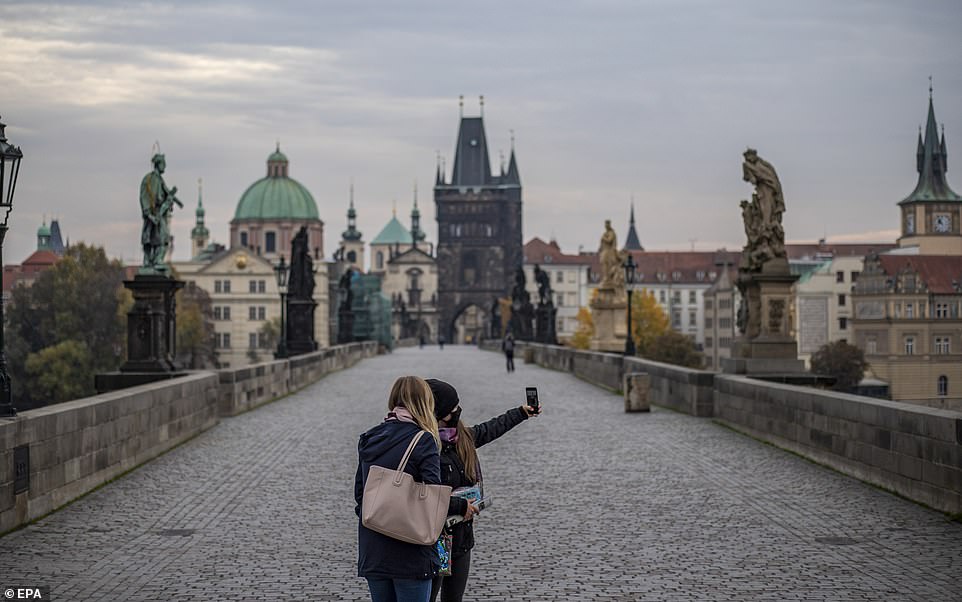 In France, the government warns that the 9pm to 6am curfew ordered by Emmanuel Macron last week is unlikely to start showing results for two or three weeks.

It already covers Paris and other major cities and is now set to be extended to other regions, a government spokesman said after a cabinet meeting today.

Prime minister Jean Castex will unveil the latest restrictions tomorrow after the cabinet agreed to extend France’s state of emergency until February 2021.

The draft law will also allow the government to impose curbs on movements, opening hours and public gatherings until April next year if necessary.

Daily cases have risen to nearly 25,000 in France while Tuesday saw 1,944 people hospitalised with Covid-19, the highest figure since April.

French hospitals are currently treating 12,458 people while the figure of 2,177 people in intensive care is the highest since May 15.

Tuesday also saw an alarming spike in deaths with 162 more fatalities in hospital, the most since May, and 262 deaths in total. 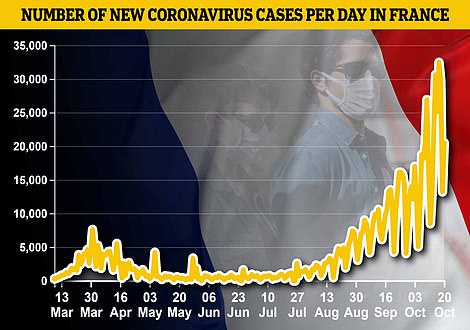 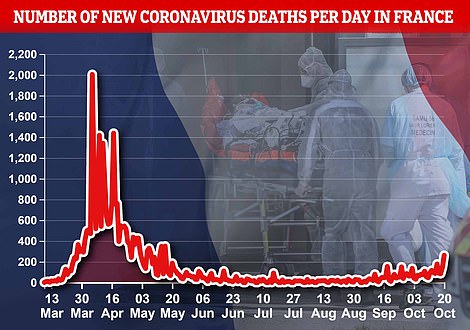 FRANCE: French cases have risen to an average of nearly 25,000 per day while hospital cases, intensive care admissions and deaths are all reaching their highest levels for several months 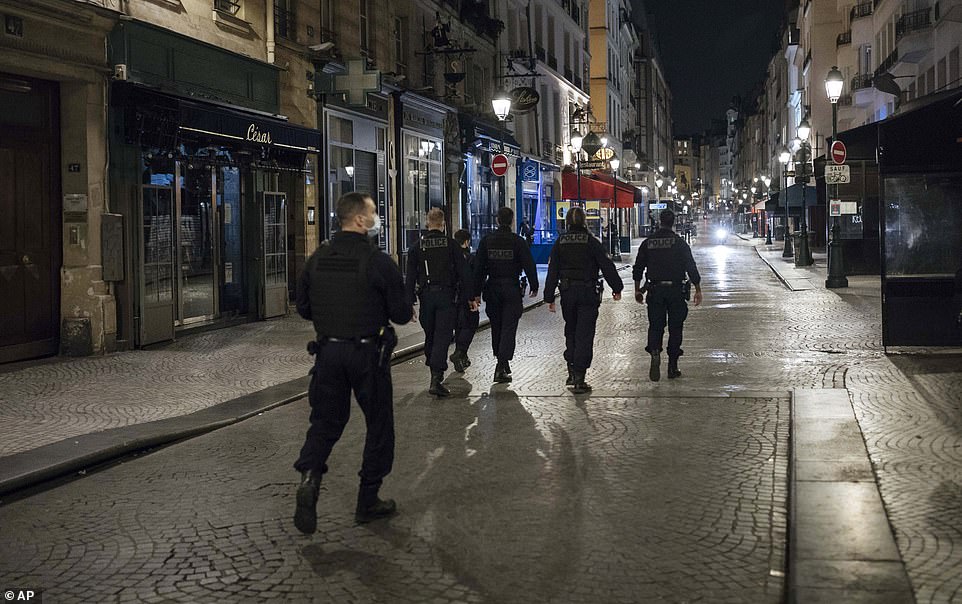 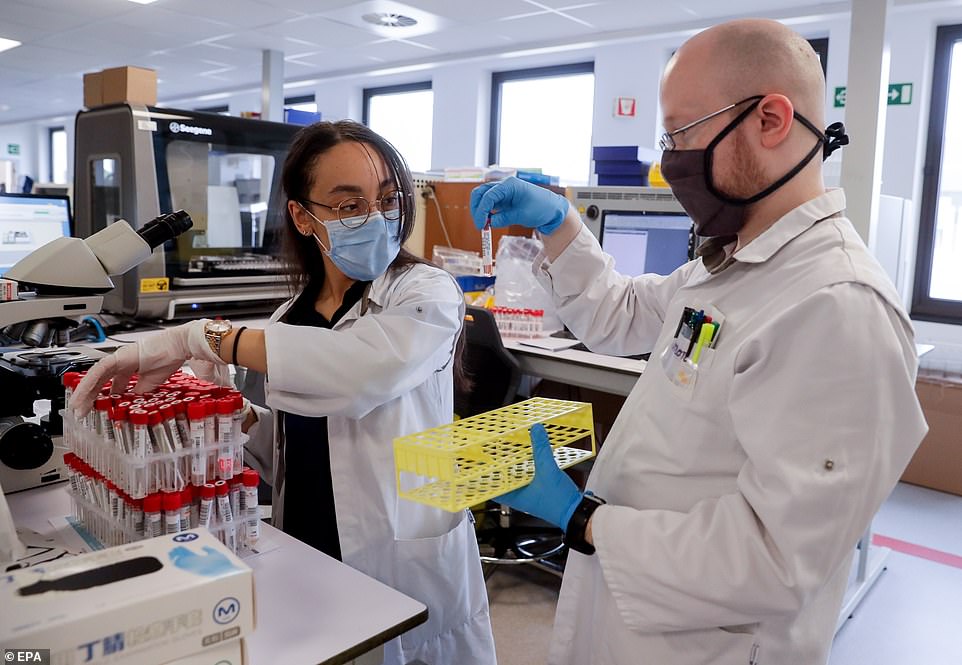 BELGIUM: Laboratory technicians analyse Covid-19 samples at the Etterbeek-Ixelles site of the Iris Sud Hospitals in Brussels, where the government is having to ration tests because of a shortage

The numbers are less dire in Germany, which is typically seeing 6,500 cases and close to 30 deaths per day, but they have risen sharply in the last three weeks.

The Alpine district of Berchtesgadener Land yesterday became the first in Germany to go back into lockdown with people kept inside except for limited purposes.

Bavaria’s state premier Markus Soeder said he wanted to keep schools and nurseries open as long as possible and keep the border with Switzerland and Austria open.

But he told Bavaria’s state parliament that ‘corona is back with full force … the second wave is here.’

Bavaria has more cases than anywhere else in Germany but Soeder argued that the infection rate is lower than in other states such as Berlin.

‘Our priority is to avoid a blanket lockdown,’ he said, adding that he would introduce a ‘dark red’ alert level with tougher restrictions for areas with 100 new cases per 100,000 people over seven days.

Angela Merkel previously agreed thresholds of 35 and 50 cases per 100,000 at which new measures will kick in for states and cities.

Soeder also sounded a more optimistic note, saying: ‘There is light on the horizon… of course, the vaccine will come, of course the situation will be very different in spring next year… There is a tomorrow after corona.’

Earlier, a spokeswoman for German president Frank-Walter Steinmeier, 64, said he was quarantining until October 29 after a bodyguard tested positive for the virus.

Steinmeier, whose role is mostly ceremonial, has now twice tested negative for the virus. 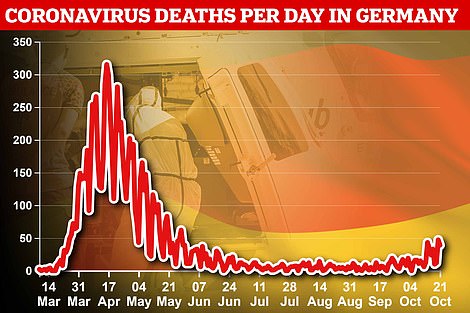 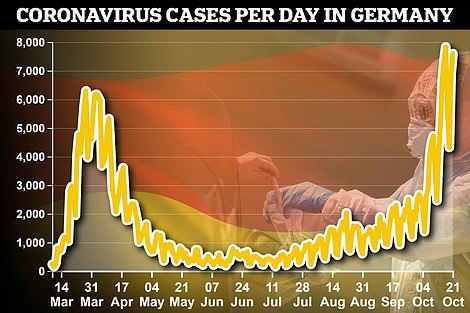 GERMANY: Cases have risen noticeably although the increase is smaller than in many neighbouring countries, while deaths are also relatively low 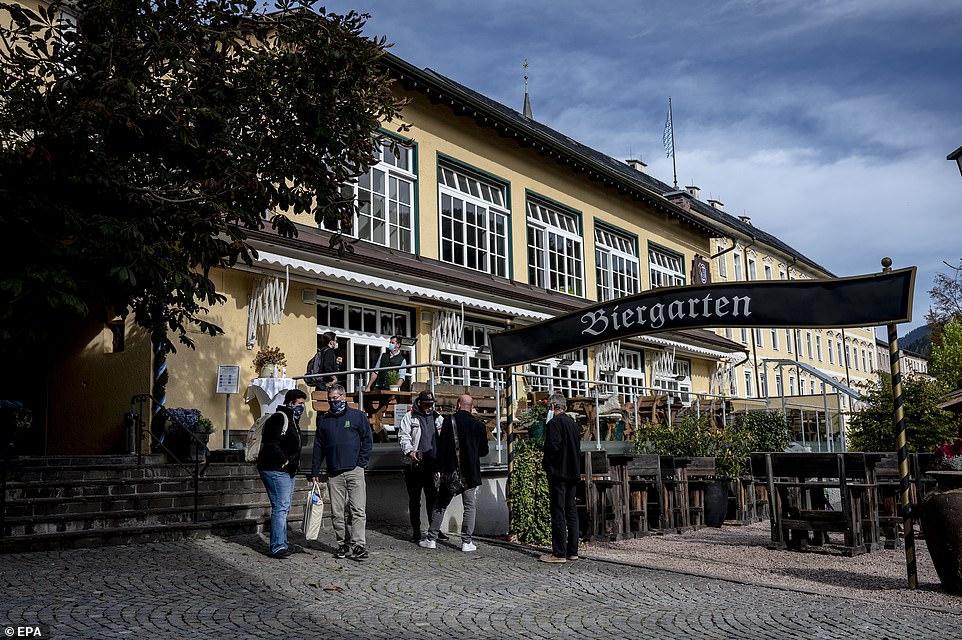 GERMANY: People stand outside a closed beer garden in the Alpine district of Berchtesgadener Land which has become the first in Germany to go back into lockdown

Meanwhile in Belgium, a shortage of tests has forced the government to stop testing people with no symptoms.

According to VRT, people who were in close contact with an infected person but are asymptomatic will have to quarantine for 10 days without being tested.

This includes people who are notified by the Belgian contact-tracing app and who return from high-risk foreign countries.

‘From now on people will give priority to people with symptoms,’ said virologist Steven Van Gucht, adding that 38 per cent fewer tests would be performed.

He added: ‘The adjustment is absolutely necessary because the labs can no longer follow up.

‘We currently do more than 60,000 tests per day. That is at or even over the limit of the laboratories.’

In addition, Belgian authorities fear that care homes could soon be hit by another wave of cases after seeing half of its Covid deaths there during the spring.

In the Dutch-speaking region of Flanders, coronavirus infections in care homes have risen by 51 per cent and the number of deaths has doubled in the past week. 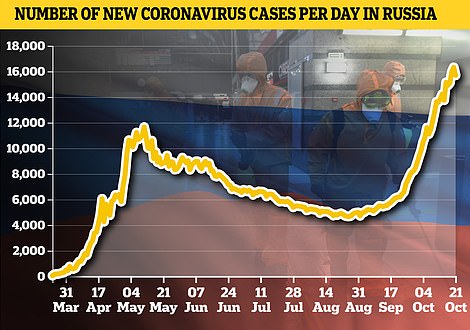 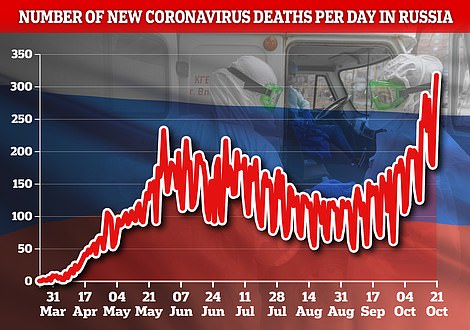 RUSSIA: Daily deaths rose above 300 for the first time today, while cases are also rising again after months of gradual decline 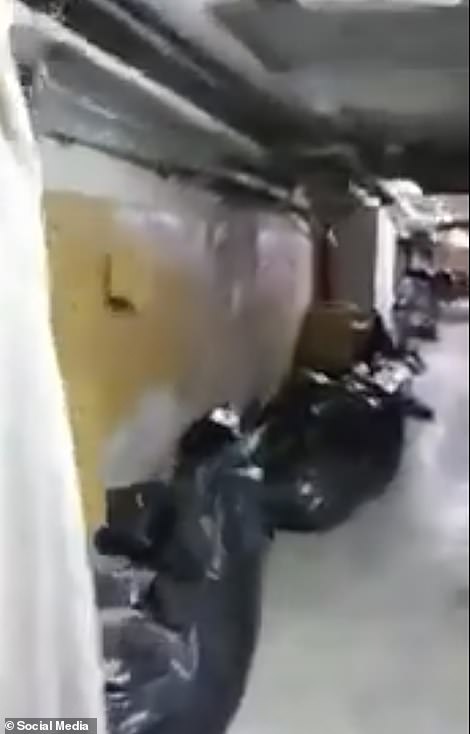 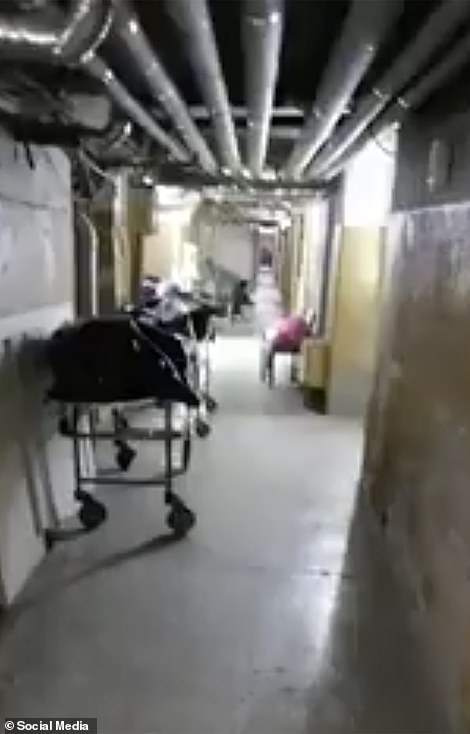 RUSSIA: These horrific pictures from a morgue at City Hospital No. 12 in Barnaul show scenes where more than 30 bodies were stashed in black bags in corridors

Elsewhere, Italy’s health minister Roberto Speranza is urging people to avoid ‘needless movements’ and ‘going out when it is not necessary’.

Cases have surged in the last fortnight in the first European country to face the onslaught of Covid-19 in the first wave, with today’s 15,199 cases smashing the previous record of 11,705 set on Sunday.

Lombardy is imposing a new 11pm to 5am curfew which begins on Thursday after health minister Speranza gave it the green light.

Milan’s mayor, Beppe Sala, said regional health authorities had warned that the 113 people currently in intensive care in Lombardy would rise to nearly 600 if new measures were not imposed.

Footage emerged of bodies being piled on floors and trolleys in a Siberian morgue which has found itself overwhelmed.

The delays were caused by a backlog in carrying out autopsies due to the spiralling numbers of fatalities.

Separately in Rostov-on-Don, health watchdog Roszdravnadzor has begun a probe into claims that 13 Covid-19 patients due to a lack of oxygen over a two-hour period.

Patients ‘who could still hold out’ died because of the shortage, it was reported.