The 1918 Spanish flu was more deadly of fatalities in New York City than coronavirus has been in 2020 – but COVID-19 drove up the death toll for the first several months of the year far beyond. what would be seen in a typical year, a new study finds.

At the peak of New York City’s coronavirus crisis, 33,465 people out of a population of 8.2 million died, of COVID-19 or any other cause.

About 2,000 fewer people died during the city’s Spanish flu crisis, but they accounted for a large proportion of the population.

However, the Harvard University scientists behind the new study found that, because day-to-day death toll outside pandemic circumstances is so much lower today than it was a century ago, coronavirus drove up New York City’s fatalities by twice as much as the Spanish flu did.

They suspect that despite better medical technology and hygiene practices, shutdowns were lifted too early, leading to additional spikes in coronavirus deaths and cases.

There were about four times more deaths in the early months of 2020 amid the coronavirus pandemic as were seen in 2017, 2018 or 2019, Harvard researchers found

Coronavirus has killed more than 166,000 Americans to-date. At least 18,970 of them were residents of New York City – and likely thousands more.

But non-essential businesses were not shut down until March 20.

Worse yet, scientists now believe that the virus had already arrived in New York City as early as January.

At the height of the pandemic’s grip on the city, coronavirus killed nearly 600 people in a single day.

The numbers were devastating. But modern hygiene and medical care have helped to keep the death toll from coronavirus, as well as any other cause, lower than it might be in other circumstances – like those that existed 100 years ago.

Not dissimilar to coronavirus, Native American tribes were among the hardest-hit groups in the nation.

A major distinguishing factor between 1918 and now: hand-washing.

Reliable and ubiquitous access to clean water and, as a result, the ability to regularly wash one’s hands wasn’t a guarantee in the US until about the mid-20th century.

Only about half of homes in the US had a bathroom by 1940. 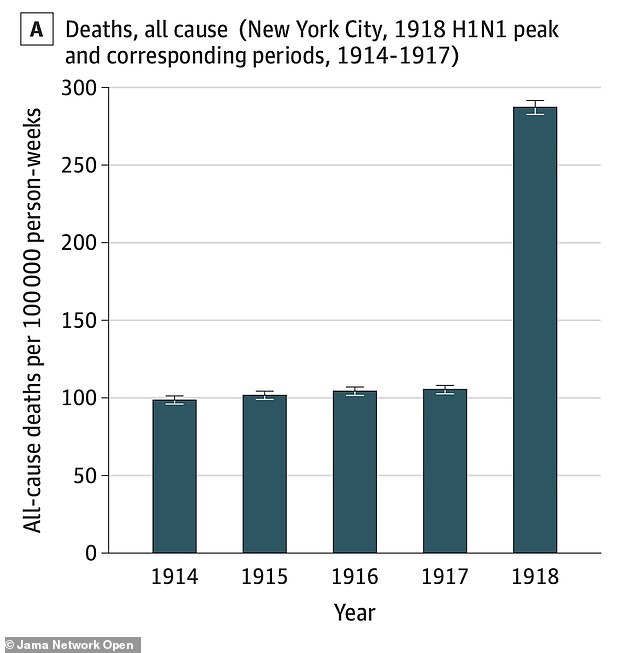 That’s largely credited with the extension of life American expectancy from somewhere in the 60s in 1940 to the 80s now.

Hygiene has dramatically reduced the transmission of infectious diseases, including flu and, now, coronavirus.

In its absence, there were about 287 deaths by any cause per every 100,000 person-months at the height of the Spanish flu in New York City.

Comparatively, there were more than four deaths during the height of the 2020 coronavirus pandemic in New York City per every one that occurred in a single year between 2017 and 2019.

‘These findings suggest that the mortality associated with COVID-19 during the early phase of the New York City outbreak was comparable to the peak mortality observed during the 1918 H1N1 influenza pandemic,’ the Harvard researchers wrote.

‘However, because baseline mortality rates from 2017 to 2019 were less than half that observed from 1914 to 1917 (owing to improvements in hygiene and modern achievements in medicine, public health, and safety), the relative increase during early COVID-19 period was substantially greater than during the peak of the 1918 H1N1 influenza pandemic.’

They noted that many people in the US believe that restrictions to slow the spread of coronavirus were lifted too early, meaning that cases and deaths were never driven to a minimum.

‘Specifically, shutdowns did not adequately lower caseloads in many areas, meaning that subsequent spikes in new cases during the summer stretched US hospital resources in many areas,’ the researchers wrote.

‘We believe that our findings may help officials and the public contextualize the unusual magnitude of the COVID-19 pandemic, leading to more prudent policies that may help to decrease transmission by decreasing the effective reproduction number of SARS-CoV-2 and prevent the exhaustion of essential supplies of life-saving resources in the coming weeks and beyond.’