Matt Hancock pledges to test every care home resident and staff member in England for coronavirus by ‘early June’ amid growing scandal over death toll after ONS figures show 23,000 extra deaths this year

Matt Hancock today pledged to test every care home resident and staff member in England for coronavirus by ‘early June’ amid a growing scandal over the number of elderly people dying from the disease.

Office for National Statistics data released today showed between March 2 and May 1 there were 12,526 deaths in care homes where Covid-19 was mentioned on the death certificate.

Meanwhile, the overall number of deaths of care home residents in England and Wales from December 28 to May 1 this year was 73,180 – some 23,136 more than in the same period last year. Once the Covid-linked deaths are taken into account that means there are more than 10,000 unexplained excess deaths in the period.

The Government is under growing pressure to do more to keep the most vulnerable in society safe and the Health Secretary today confirmed £600 million of new funding to stop the spread in care homes.

He also said the Government’s approach so far had meant that almost two thirds of care homes have not recorded any cases of coronavirus. 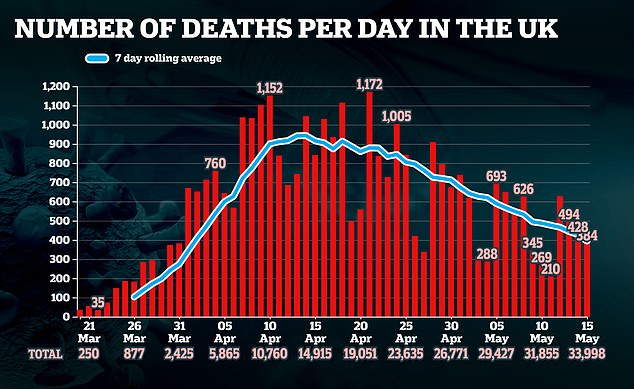 The testing pledge came two days after Boris Johnson was skewered by Sir Keir Starmer at PMQs over the issue.

The Labour leader accused the PM of misleading the House of Commons after he denied the Government had previously said the virus was unlikely to break out in care homes.

‘We test any resident returning to a care home from hospital and all residents with symptoms and all social care colleagues and members of their households if they have symptoms.

‘Together, these measures have saved lives and protected 64 per cent of care homes, almost two thirds, from having any coronavirus cases at all.

‘And where there are cases we have taken extra measures to protect measures and staff with local public health officials playing such a critical role.

‘Now we have capacity for well over 100,000 tests a day we are extending testing coverage still further.

‘All care home residents and staff in England, both those with symptoms and those without, are now being tested.

‘And in fact we will test every resident and every member of staff in our elderly care homes in England between now and early June.’

Mr Hancock said care home managers will be able to apply online for testing kits to be sent to their location.

He also confirmed that a £600 million Infection Control Fund has been introduced to tackle the spread of coronavirus in care homes.

The money is being sent to councils to hand out but it has been ring-fenced so that it must be spent on social care.

It will be used by care homes to help cover the costs of implementing measures to reduce the transmission of coronavirus.

Ministers have been repeatedly grilled in recent weeks over the action they have taken to shield care homes from the disease.

Sir Keir ambushed Mr Johnson at PMQs on Wednesday as he quoted official guidance which had been in place until March 12 – well after coronavirus had started being transmitted in the UK.

In a section on face masks, the Public Health England advice to the care sector said: ‘It remains very unlikely that people receiving care in a care home or the community will become infected.’

Sir Keir said it showed the Government had been ‘too slow to protect people in care homes’.

Mr Johnson replied that ‘it wasn’t true’ to say the advice said that. He later accused Sir Keir of quoting selectively from the guidance.