One of the nurses President Trump was hosting in the Oval Office for National Nurses Day told him that she had been wearing the same N95 mask ‘for a few weeks now’ as the president called the PPE crisis ‘fake news.’

Sophia Thomas, the president of the American Association of Nurse Practitioners, who practices in New Orleans said there were areas where the PPE supply was ‘not idea.’

‘But this is an unprecedented time and the infection control measures that we learned back when we went to school – one gown, one mask for one patient a day or for a time – this is a different time,’ she explained.

President Trump, surrounded by nurses, said the country had a ‘tremendous supply’ of medical equipment to combat the coronavirus, with one nurse saying she’s seen no shortage and another reporting that she had worn the same mask for weeks 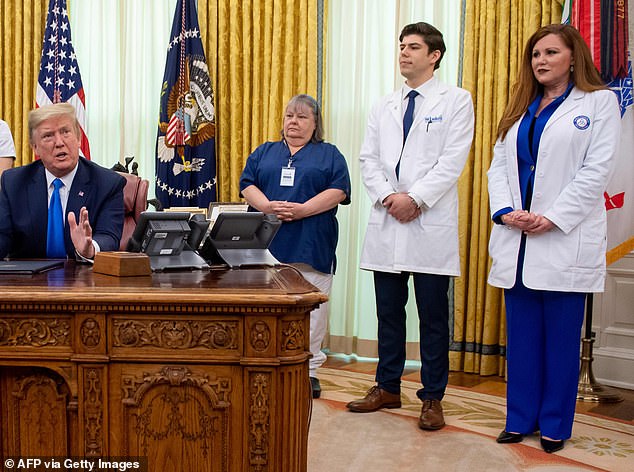 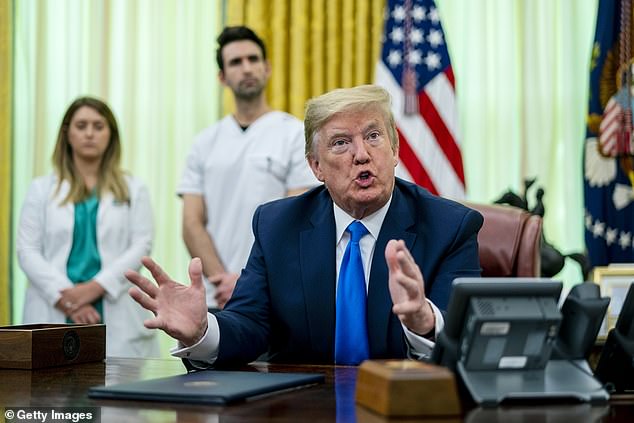 President Trump said he heard the ‘opposite’ of what Sophia Turner called ‘sporadic, but manageable’ supplies of PPE – personal protective equipment

‘I’ve been reusing my N95 mask for a few weeks now,’ she continued. ‘I just broke out a new to come here in case I needed to wear it.’

She described the supply of PPE – personal protective equipment – ‘sporadic, but manageable.’

That’s when President Trump jumped in.

‘Sporadic for you, but not sporadic for a lot of other people,’ Trump said.

‘Because I’ve heard the opposite,’ Trump said. ‘I’ve heard that they are loaded up with gowns now.’

The president continued to contend that he had ‘nothing’ in terms of stored up medical supplies.

‘Because it wasn’t put there by the last administration,’ he said.

He mentioned his trip to Phoenix on Tuesday to tour a Honeywell plant that was making N95 masks.

‘I’ve heard we have tremendous supply, to almost all places,’ Trump said. ‘To the point where we’re going to have some of our supply go to other countries.’

Another nurse chimed in to say that she didn’t care for the fearmongering reports in the news about supply shortages because it drives up anxiety for medical personnel.

Trump cut in at this point too.