A coronavirus outbreak at a caravan park in Shropshire has seen nearly two dozen residents struck down with the life-threatening disease.

Twenty-one new cases of Covid-19 have been confirmed out of 41 people tested at the site, which is in the town of Craven Arms.

But council bosses fear the number of coronavirus cases will continue to rise before infection-control measures start to take effect.

Officials say the risk to the public is ‘low’ as long as people stick to the coronavirus guidelines, which include social distancing and regular hand washing.

Twenty-one new cases of Covid-19 have been confirmed out of 41 people tested at the site, which is in the town of Craven Arms, Shropshire 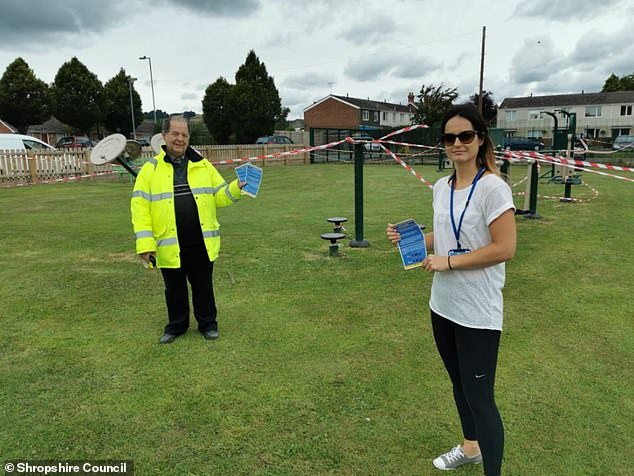 A testing centre has now been set up at nearby Craven Arms Business Park. A playground close to the caravan park (pictured) has also been closed to help reduce social contact and the risk of transmission

The site has not been named and is only described as being ‘near Craven Arms’ — a town of 3,000 people.

There are several sites nestled in the area which offer pitches for caravans alongside tents.

Testing began last week after three positive cases were confirmed at the site on July 24.

Anyone who has tested positive has been told to self isolate for at least seven days in their caravan without going outdoors.

It led to the discovery of another 18 cases. It is currently unclear if these people were showing symptoms.

ARE CASES CREEPING UP IN ENGLAND?

Office for National Statistics estimate that daily infections have risen from 1,700 to 2,800 in the space of seven days.

It would take the current total of new cases per week to 22,400.

The data, based on population testing, suggests one in 2,000 people across the country were carrying Covid-19 within the most recent week up to July 19 – a total of 27,700 people or 0.05 per cent of the population.

The ONS has stopped short of saying the crisis is growing because all three estimates are based on complex trend models and fall within a possible range. But statisticians behind the report say the week-on-week rises indicate that the epidemic’s decline at least ‘levelled off’.

ONS estimates how many infections there are overall, and not just through testing. The organisation collect data from swab tests sent regularly to people’s homes to test whether they are infected with the virus at the time. The people are chosen to be representative of the UK population.

ONS data is considered to be some of the most accurate available – this week’s update was based on the results of 114,674 swab tests taken over six weeks, of which 45 were positive. The results do not include care homes.

Covid-19 cases based on testing have also risen.

Some 747 new cases were announced by the Department of Health on Sunday, taking the seven-day rolling average up to 663 – a seven per cent increase on the previous Sunday.

Meanwhile SAGE warned on Friday that the virus’s R rate – the average number of people each coronavirus patients infects – has risen to between 0.7 and one or 0.8 and one in all regions of England for the first time since lockdown was lifted. The R needs to stay below one to prevent future outbreaks from spiralling out of control.

It doesn’t necessarily mean England is on the brink of another crisis, however, because scientists say when case numbers are as low as they are, the R becomes more volatile and small clusters can skew the rate upwards.

Rachel Robinson, Shropshire Council’s director of public health, said the cases were linked to an outbreak in the nearby Welsh town of Welshpool, which is just 25miles (40km) away.

Health officials at Powys Teaching Health Board said on July 24 it was aware of ‘a number of cases of coronavirus in the Welshpool area’.

Reports suggest it was sparked by a local event, although the exact details of what triggered an influx in cases are unclear.

Posts on social media indicated that the cases have involved a group of people living at Leighton Arches, a traveller site, local media reported.

Ms Robinson said outbreaks of Covid-19 were ‘not uncommon’ as the coronavirus crisis winds down.

‘We do expect that at this stage of a pandemic we will see cases in the community and we will see outbreaks,’ she said.

She added that the risk to the general public is ‘low’ but that everyone should continue to follow government guidelines.

It follows official figures which suggest cases of the coronavirus are creeping up.

Around 1,000 more people are estimated to be catching the disease every day in England, compared with last week.

Office for National Statistics data based on population testing predicts that daily infections have risen from 1,700 to 2,800 in the space of seven days, to a current total of 22,400 new cases per week.

The 21 people who tested positive for coronavirus at the caravan site were asked to self-isolate for at least seven days from the time they started showing symptoms or from when they received their positive test result.

Everyone on the site has been told to self-isolate for 14 days if they have been in contact with a positive case.

Shropshire Council said staff had been at the site providing residents with information on how to prevent the spread of the virus, its symptoms and what to do if they are feeling unwell.

It said it had been distributing personal protective equipment, hand sanitiser, cleaning products and other supplies to residents.

A playground and outdoor gym on nearby Newington Way has been temporarily closed to help curb transmission.

The council said it had been arranging the delivery of essential supplies, such as medicine, for residents, and the group living there has been cooperative with health practitioners.

A testing centre has now been set up at nearby Craven Arms Business Park so anyone in the town can get a test. Everyone living on the site has been offered a test.

The centre will be open for the next two weeks between 10.30am and 3.30pm and those living nearby can book a test online via NHS Test and Trace or by ringing 119.

A playground close to the caravan park has also been closed to help reduce social contact and the risk of transmission.

Councillor David Evans said: ‘Our priority is to protect the health and wellbeing of our local residents.

‘I’ve been in Craven Arms to talk to residents and businesses to answer any questions and reassure them that the risk to the general public is low.’

He added: ‘I would like to thank members of the community for their own ongoing support and cooperation.

‘We continue to rely on everyone at the site playing their part, and want to encourage the residents to continue to self-isolate and take all the necessary precautions.

‘This is the only way we can help stop the spread of the virus.’

MailOnline have contacted Public Health England and the Department of Health for any more additional information.