Homophobia has surged in South Korea after a coronavirus outbreak in the country’s capital was linked to ‘gay clubs’.

A 29-year-old man thought to be at the epicentre of the latest cluster was tracked by authorities after going to a number of nightclubs in Itaewon, Seoul.

He went out on Friday, May 1, and tested positive for the Covid-19 the next Thursday, reported CNN.

Reports that claimed the patient had been visiting ‘gay clubs’ have led to a rise in homophobic hate speech in the country.

Health workers spray disinfectant on a street in the Itaewon district of Seoul on May 12, 2020. A 29-year-old man thought to be at the epicentre of the latest cluster was tracked by authorities after going to a number of nightclubs

The nightclubs in question do not advertise themselves as gay venues.

The city’s Mayor Park Won-Soon said: ‘The growing number of condemnation and hate speech definitely does not help and only has adverse effects.’

On Monday, a Ministry of Health official, Yoon Tae-ho, said that there had been a trend of ‘criticism and hate against a certain group to which the infection occurred’.

‘Leaking personal information of confirmed patients or spreading baseless rumours not only harms other but could be criminally punished,’ Mr Yoon added. 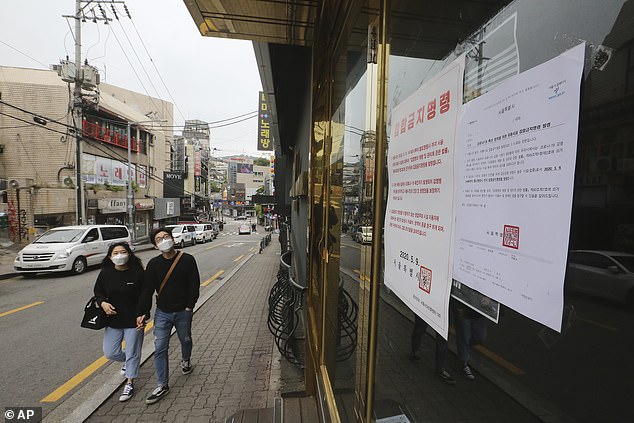 ‘The attitude of media, who are obsessed with revealing the sexual orientation of the confirmed case and digging up information that has nothing to do with the disease, is adding a stigma of the disease to the hatred of minorities that has been prevalent in Korean society,’ it read.

There have been at least 100 other positive tests linked to the area but officials have been unable to contact at least 2,000 club-goers – despite asking for names and phone numbers at the door to each venue.

It is thought some revellers may have given false numbers or ignored calls, Mayor Park said on Monday. 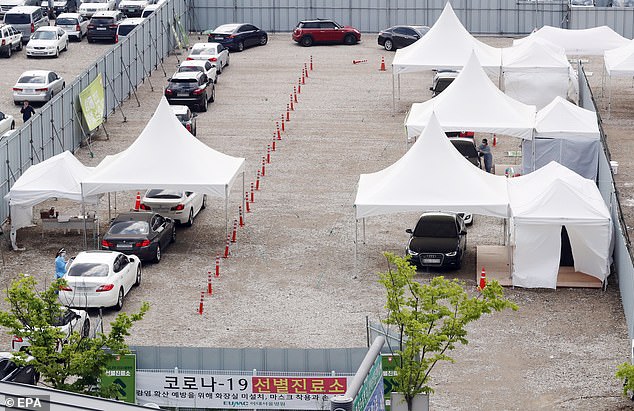 There have been at least 100 other positive tests linked to the area but officials have been unable to contact at least 2,000 club-goers – despite asking for names and phone numbers at the door to each venue. Pictured, a Seoul drive-thru testing clinic

Instead, phone tower signals and credit card records have been accessed to allow authorities to get in touch with those who may have been infected.

Data from the phone tower found 10,905 people were in the vicinity of the clubs between April 24 and May. They have all been texted and told to get tested.

On Tuesday KCDC deputy director Kwon Joon-wook revealed there have been two people identified as having symptoms from May 2, after being in the affected area.

He added that the cluster may have ‘various epicenters or sources.’ 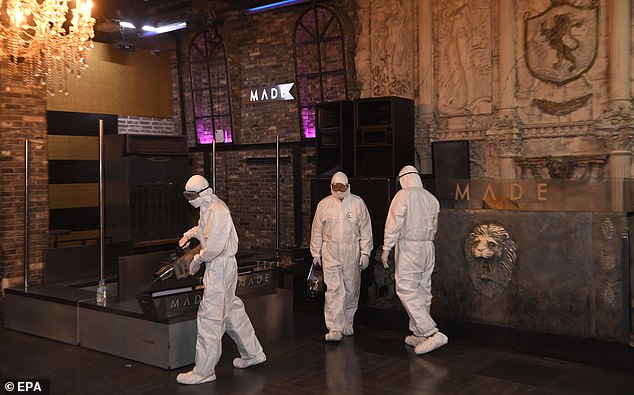 Health officials disinfect the interior of MADE, a major club in the international tourist district of Itaewon

The total number of cases linked to three nightclubs in Itaewon in Seoul, visited by a 29-year-old patient who had tested positive for coronavirus, increased to 54 as of Sunday afternoon, according to the Korea Centers for Disease Control & Prevention.

Authorities are estimating between 6,000 to 7,000 could have been exposed to the virus from clubs between April 29 and May 6, according to Bloomberg.

South Korea’s capital has shut down more than 2,100 nightclubs, hostess bars and discos after infections were linked to club goers who went out as the country relaxed social distancing guidelines. 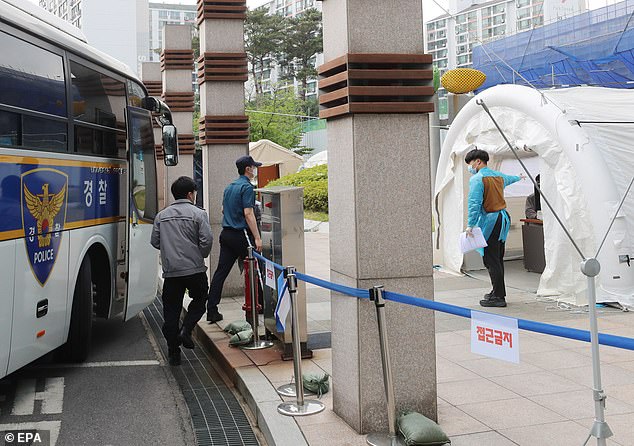 Park said the entry bans on the facilities will be maintained until the city concludes that risks of infection have been meaningfully lowered.

Eleven of the 54 confirmed cases are secondary infections. The infection rate is highest for those who visited King Club in Itaewon on May 2, and more than 30 per cent of the confirmed patients are asymptomatic. 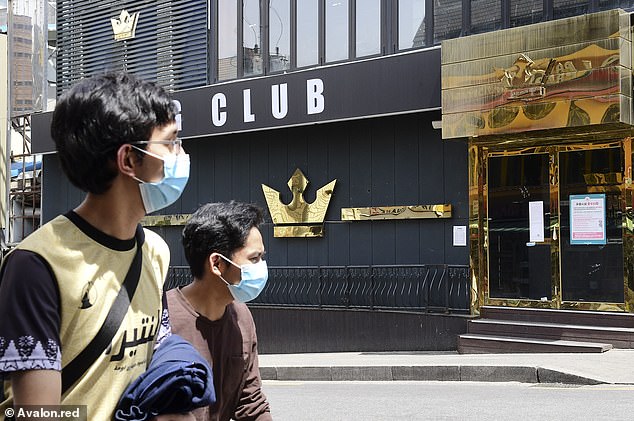 A 29-year-old man tested positive for coronavirus after visiting three clubs in the Itaewon district of Seoul, South Korea, last Saturday. He has been linked to 54 cases

South Korea has confirmed at least 10,936 cases of the coronavirus, including 258 deaths.

Fewer cases in previous weeks had allowed for social distancing guidelines to be relaxed and a phased reopening of schools.

The country was the first to re-start their top football league again, K-League, with matches taking place from May 8 behind closed doors.

Jeonbuk Motors took on Suwon Bluewings on May 8 and won 1-0, scoring after 83 minutes. The game was originally scheduled for February 29. 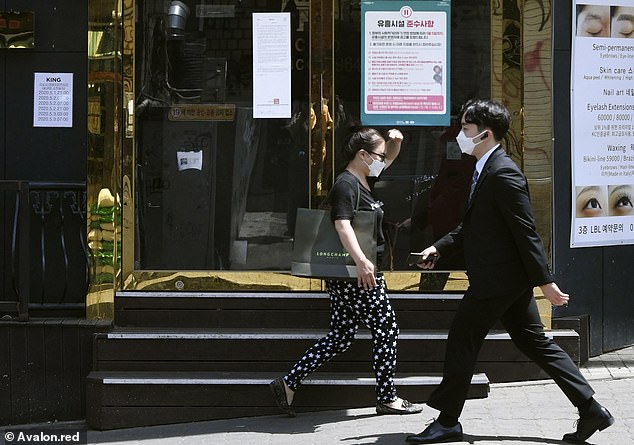 The rules say there are no pre-match handshakes and players have been warned they cannot speak to one another during the course of a game while coaches are to wear face masks at all times during games.

Incheon United captain Kim Do-hyeok said that not talking to team-mates is impossible and will pose difficulties for his side.

He added that rules such as not spitting they could do no problem but added: ‘If we can’t have conversations on the field, we may as well not play at all’.

In mid-April, South Korea appeared to be dealing well with the outbreak and was widely praised for mass testing and its contact-tracing strategy which other countries sought to emulate. 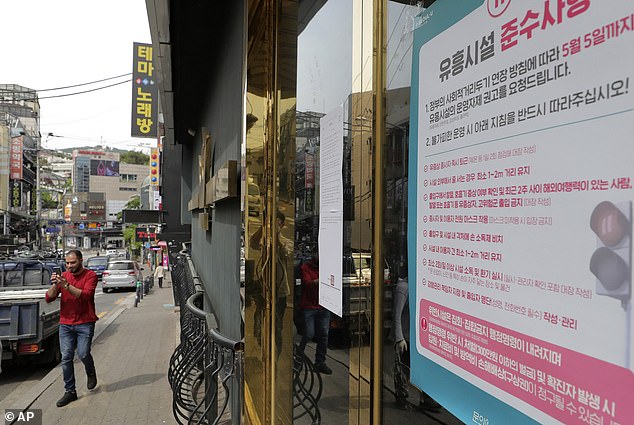 They reported just eight new cases on April 19. It was the first time the nation’s daily increase dropped to single figures in two months.

It had 10,661 cases of the virus which, at that point, had killed 234 people in South Korea. There were 8,042 patients recovered and released from quarantine.

There were fears in South Korea throughout April that people were becoming ‘reinfected’ as people who had had coronavirus tested positive again. 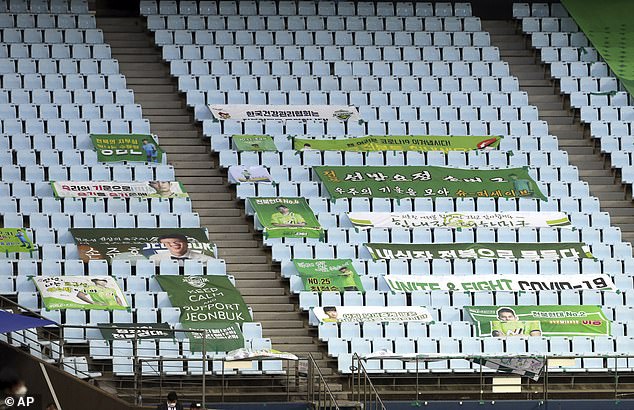 The football league has returned behind closed doors. Cheer banners from fans are placed on seats in the stadium prior to the opening of the game 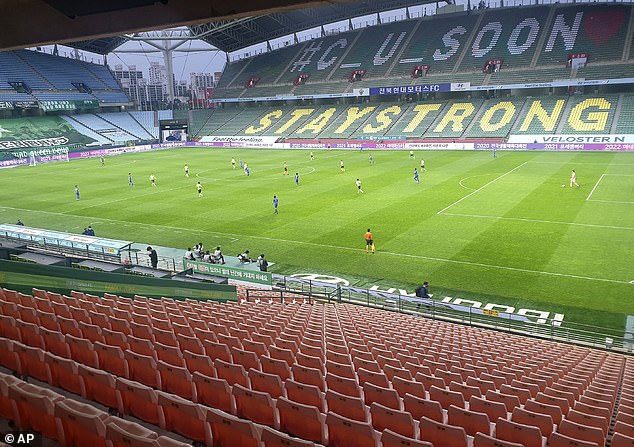 South Korean officials later revealed that 292 patients feared to have been ‘reinfected’ were given false positive results.

President Moon Jae-in said: ‘We must not loosen our guard until the last confirmed patient is recovered.’

Officials warned of the possibility of a ‘quiet spread’ when people eased up on social distancing despite the rapid downward trend.

Seoul started its testing programme when the numbers were still small, telling companies to develop testing kits as early as January 27.