By Mary Kekatos for DailyMail.com

The US Food and Drug Administration (FDA) has warned against using the anti-malaria drug hydroxychloroquine on coronavirus patients outside of hospital settings or clinical trials.

President Donald Trump has hailed the drug, which also is used to treat arthritis and lupus, as a ‘game-changer’ for treating COVID-19, the disease caused by the virus.

The federal health agency said it was issuing the warning after several reports of abnormal heart rhythms and rapid heart rates in patients who took the medication.

‘The FDA is aware of reports of serious heart rhythm problems in patients with COVID-19 treated with hydroxychloroquine or chloroquine, often in combination with azithromycin,’ the FDA wrote in a statement issued on Friday.

‘We are also aware of increased use of these medicines through outpatient prescriptions. Therefore, we would like to remind health care professionals and patients of the known risks associated with both hydroxychloroquine and chloroquine.’

The agency said hydroxychloroquine can still be used in clinical trials or in some hospitalized patients.

It’s not immediately clear if any trials are in progress or planned trials will be halted based on the new guidance.

‘HYDROXYCHLOROQUINE & AZITHROMYCIN, taken together, have a real chance to be one of the biggest game changers in the history of medicine. The FDA has moved mountains – Thank You! Hopefully they will BOTH (H works better with A, International Journal of Antimicrobial Agents),’ he wrote in March. 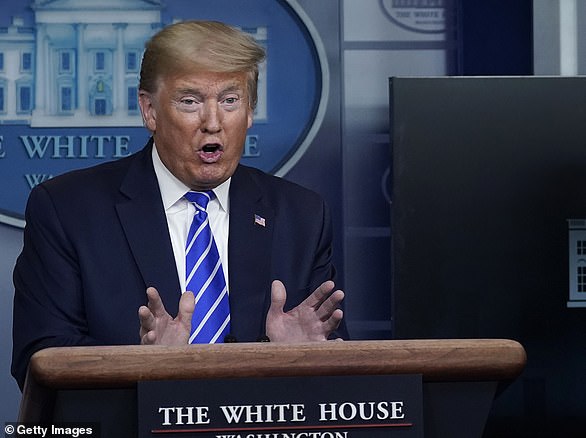 President Donald Trump has touted the drug in as a potential ‘game-changer’ for treating coronavirus. Pictured: Trump during the White House coronavirus daily briefing, April 23

One week later, the FDA issued an emergency use authorization for the drug, saying it could be used in hospitalized coronavirus patients with severe disease.

Several weeks later, the French study’s publisher said the paper ‘did not meet its standards’ because it excluded data on patients who did not respond well to the treatment.

Since then, much of the initial excitement surround hydroxychloroquine has died down.

In one study from the National Institutes of Health, 28 percent of US veterans with coronavirus who were treated with hydroxychloroquine died of the infection.

About 22 percent of those getting the anti-malaria drug plus antibiotic azithromycin died as well. 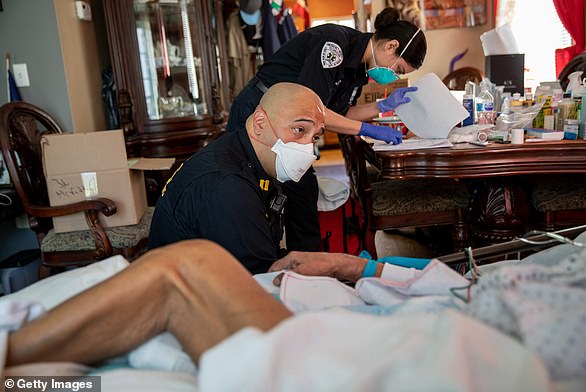 The FDA made its warning after several reports of abnormal heart rhythms and rapid heart rates in patients who took the medication. Pictured: Medics prepared to intubate a patient with COVID-19 symptoms at home

Additionally, the family of a New York woman with symptoms of COVID-19 told NBC News she died after her doctor prescribed her a combination of hydroxychloroquine and azithromycin.

The family says the physician did not confirm she had the virus nor test for heart problems  before prescribing the drug.

And, earlier this month, the Centers for Disease Control and Prevention (CDC) removed highly unusual guidance from its website informing doctors on how to prescribe hydroxychlorquine.

Now the website no longer includes that information. Instead, its first sentence says: ‘There are no drugs or other therapeutics approved by the US Food and Drug Administration to prevent or treat COVID-19.’