Britons are being offered the chance to book an UberPool-style shared private jet for a fraction of the price of hiring a plane amid a surge in demand for private flights during the pandemic.

Dutch charter firm Hyer Aviation is launching a new operation from London Biggin Hill Airport and Farnborough Airport in Hampshire from next month which will offer shared domestic and international flights.

A shared trip from Biggin Hill to Edinburgh will cost about £1,440 per passenger, compared to chartering a whole jet for that route which would be between £6,000 and £8,000, while a shared flight to Manchester will be £880.

International shared options from Biggin Hill, which is located in the London Borough of Bromley, are also being made available, such as Cannes for £1,225 per passenger, Ibiza for £1,800 and Malaga for £2,175.

It comes as wealthy Britons have caused a surge in demand for private jets during the coronavirus crisis despite the plunge in general air travel, with travellers facing long waits at airports due to Covid-19 protocols.

A shared trip from Biggin Hill to Edinburgh will cost about £1,440 per passenger, compared to chartering a whole jet for that route which would be between £6,000 and £8,000, while a shared flight to Manchester will be £880 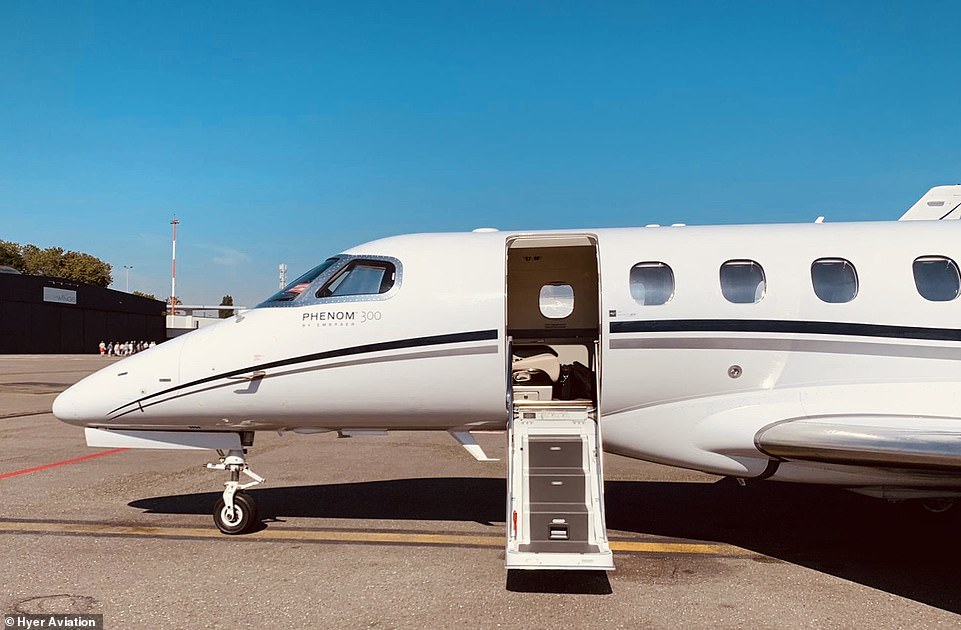 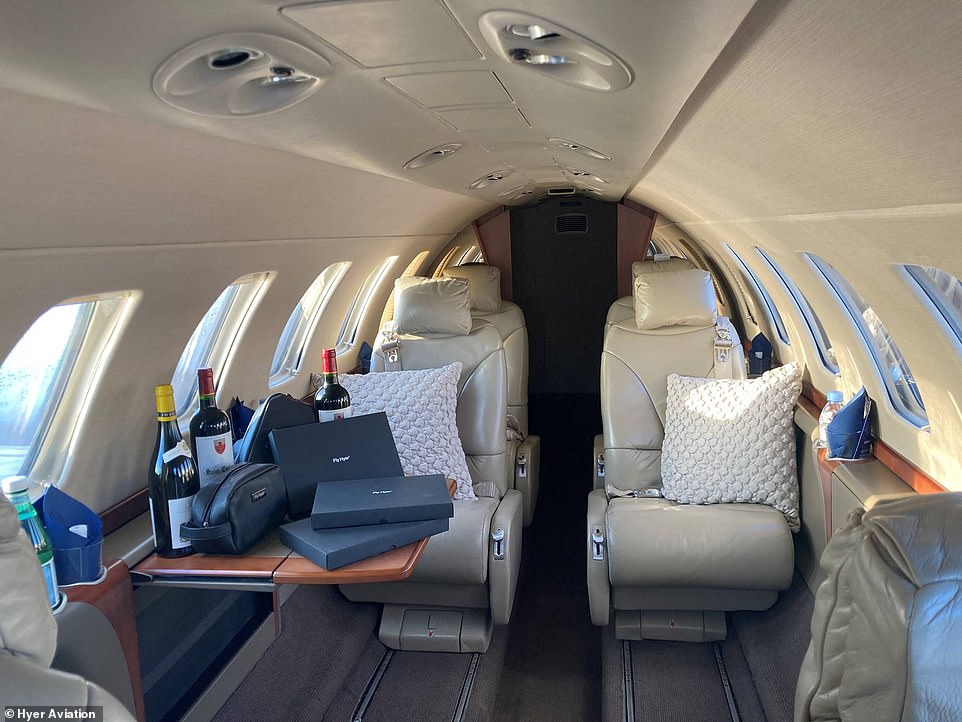 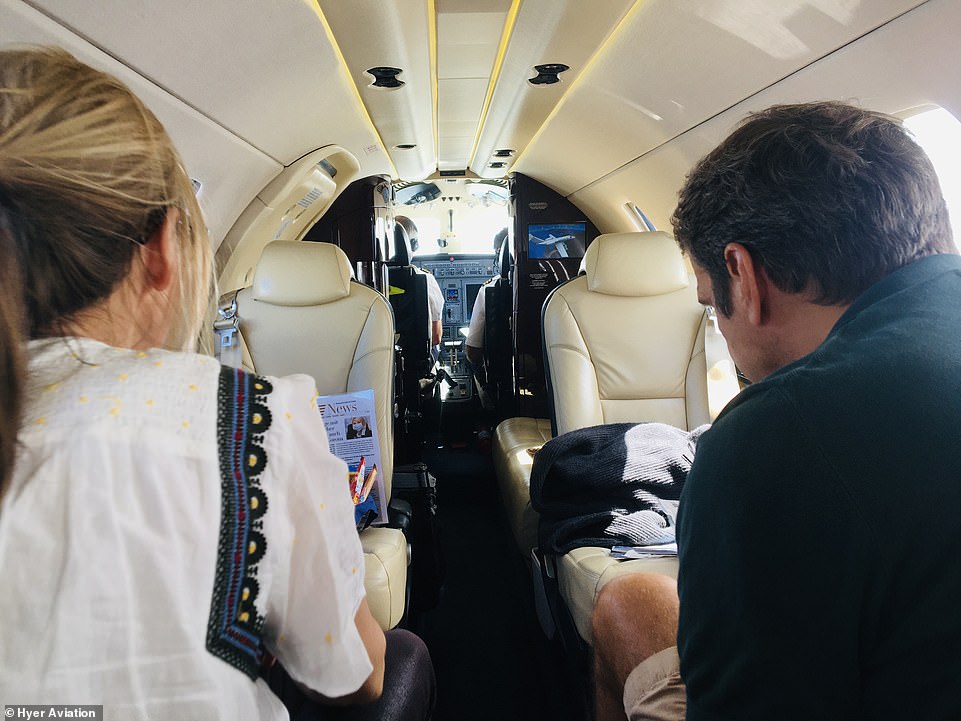 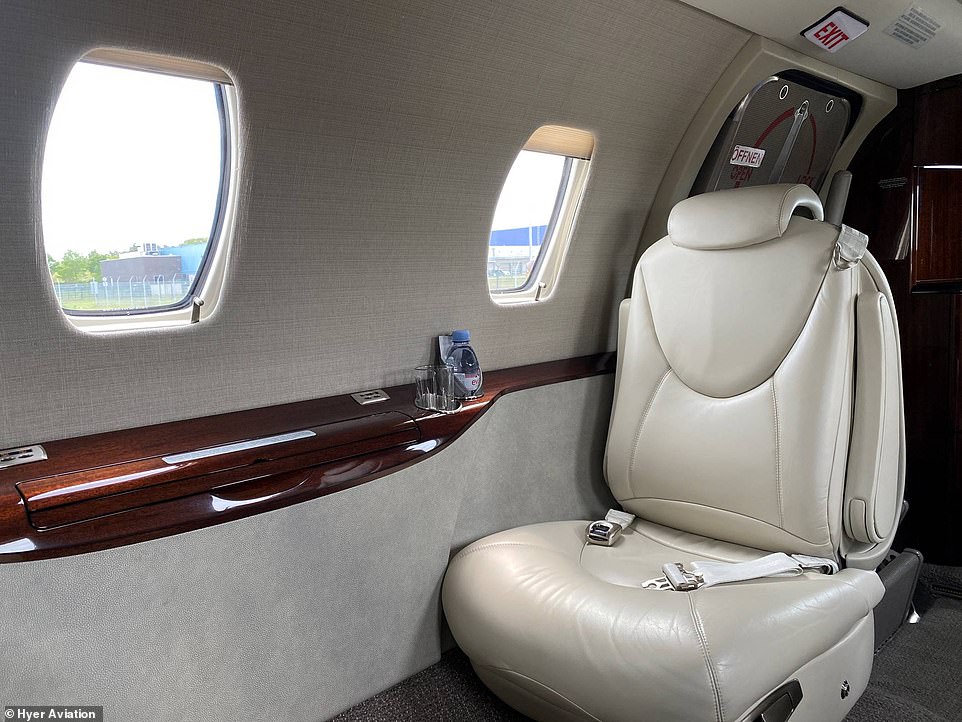 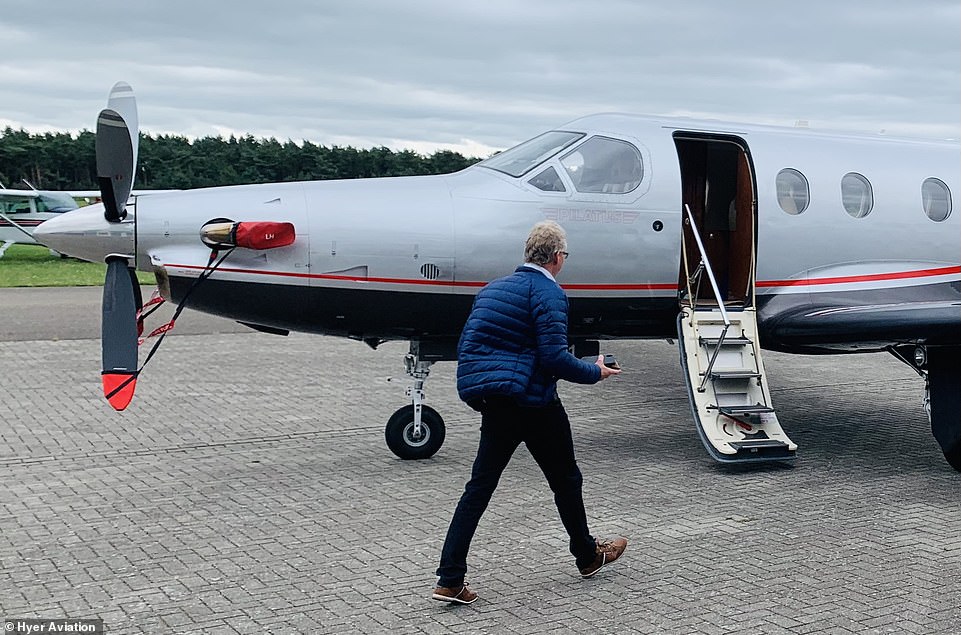 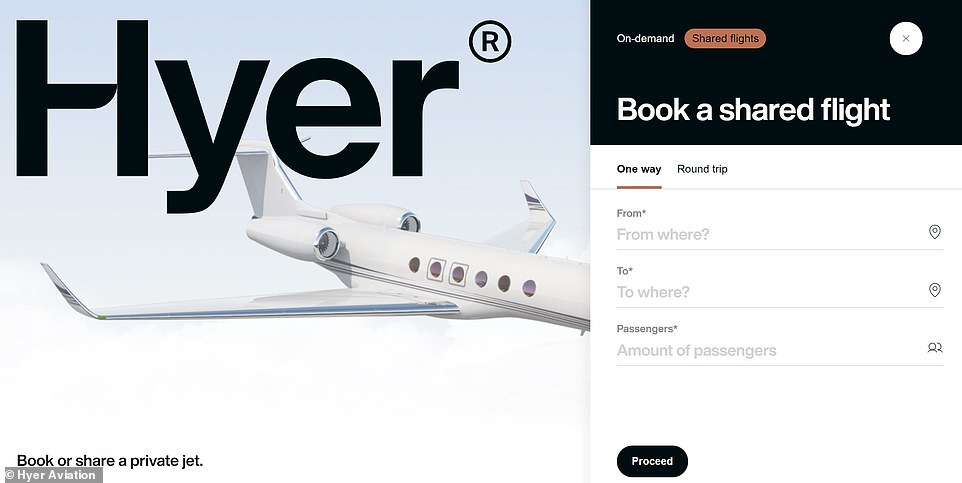 Customers who wish to reserve a flight need to pay a refundable deposit of £30, and then pay the remainder if it is confirmed

Some passengers have reported six-hour waits after landing at London Heathrow – and amid the risk of being near someone carrying Covid-19 in an airport or a plane, rich travellers are looking at hiring a private jet instead.

And Surbiton-based charter firm Air Charter Service said bookings for leisure trips by private jet had gone up by a quarter in April compared with the same period in 2019, reported The Times.

How much does it cost to fly on a shared private jet from London?

The business plan from Hyer, which also runs flights from Amsterdam, is based on the UberPool service which allows different passengers to share cars to travel to a similar destination and therefore spread the cost.

Hyer, which describes its service as ‘like an extra-comfortable UberPool with wings’, said passengers can book their own flight or join flights proposed by others.

This means they can fly on a private jet for a fraction of the cost – with the company attempting to fend off environmental concerns by insisting passengers can also offset the carbon emission of their flights.

One of its main selling points is the lack of queuing at airports upon arrival, with a press release last week quoting Heathrow’s chief solutions officer Chris Garton as saying waiting times at Heathrow in April had been ‘well in excess of two hours and up to six hours’.

There are a maximum of seven passengers allowed on each flight, and travellers can arrive at the airport only 15 minutes before departure. Hyer also quoted a report by the International Air Transport Association suggesting that the time passengers spend in the airport could reach 5.5 hours per trip if the travel demand reaches 75 per cent of pre-Covid levels.

Helder Reis, Hyer’s customer experience director, told MailOnline today: ‘Last year we started offering clients stuck abroad the option to split the cost of chartering a plane so they could still fly back home, after so many travel restrictions and airline cancellations. 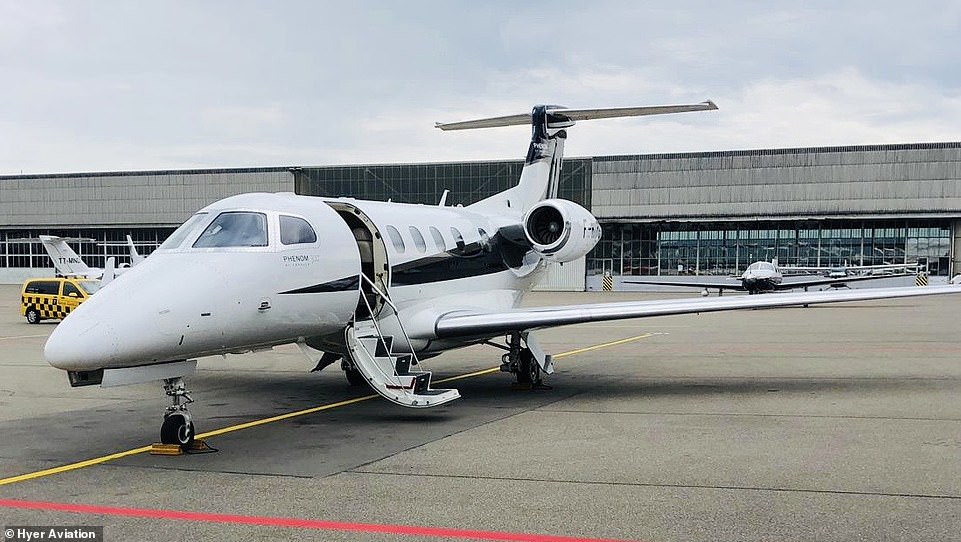 The Embraer Phenom 300E, which is the fastest and longest-ranged single-pilot business jet, is among the jets available 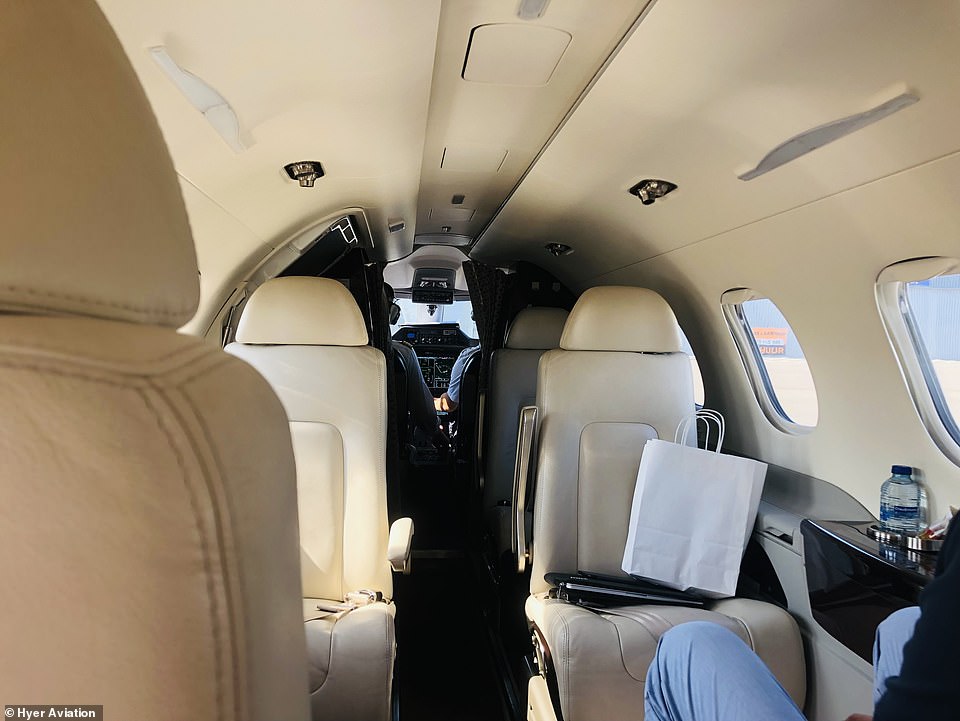 The interior of the Embraer Phenom 300 is pictured, ahead of the launch of Hyer Aviation’s UberPool-style service next month 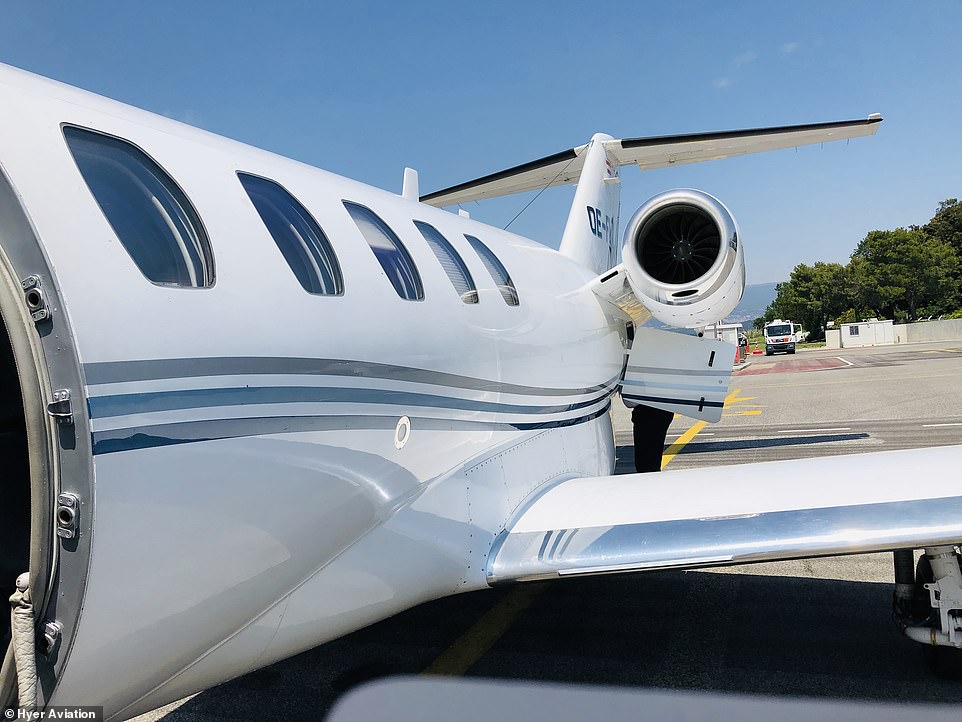 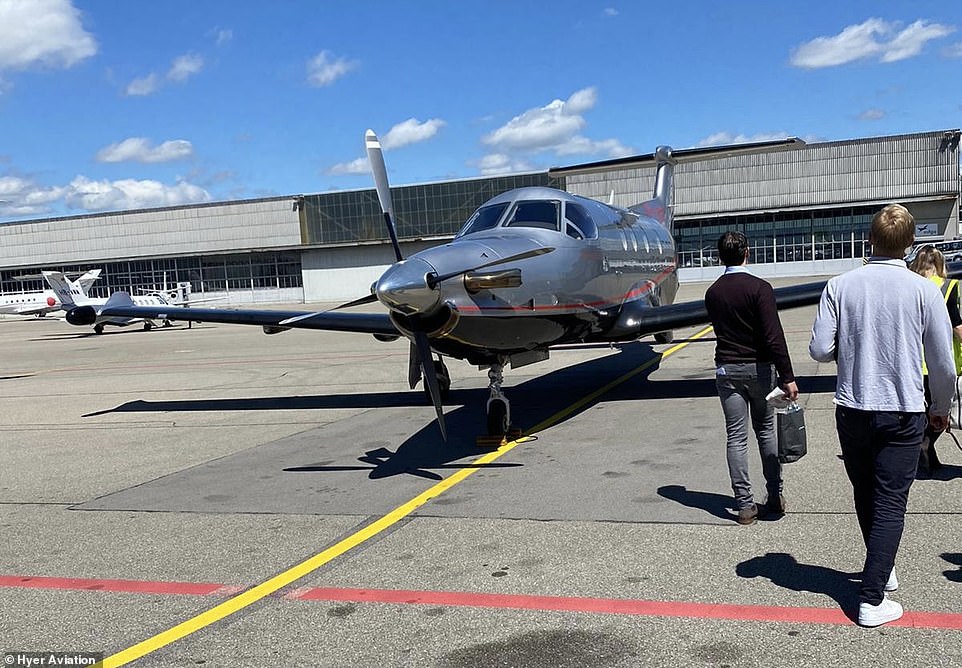 Passengers board the Pilatus PC-12 private jet, which will be among the fleet available to Hyer Aviation customers 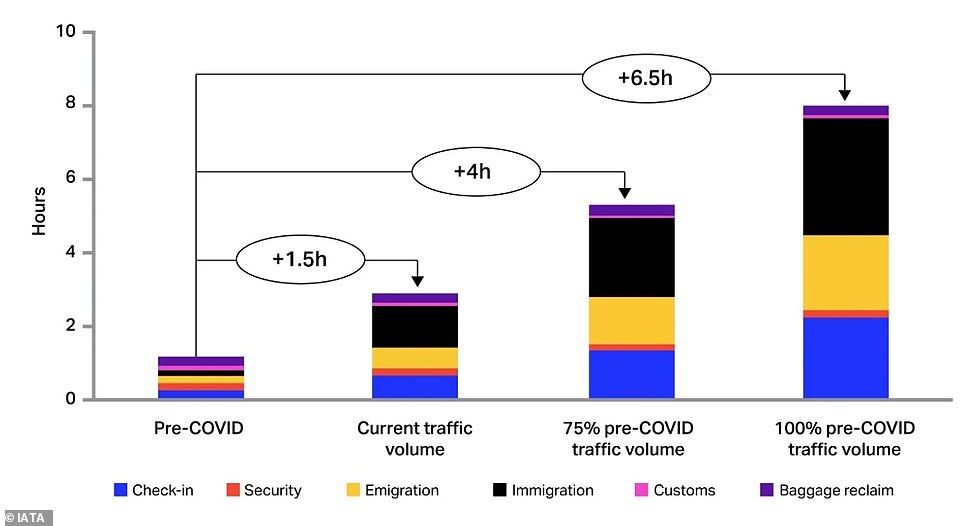 Hyer quoted a report by the International Air Transport Association suggesting that the time passengers spend in the airport could reach 5.5 hours per trip if the travel demand reaches 75 per cent of pre-Covid levels, as shown in the graph above 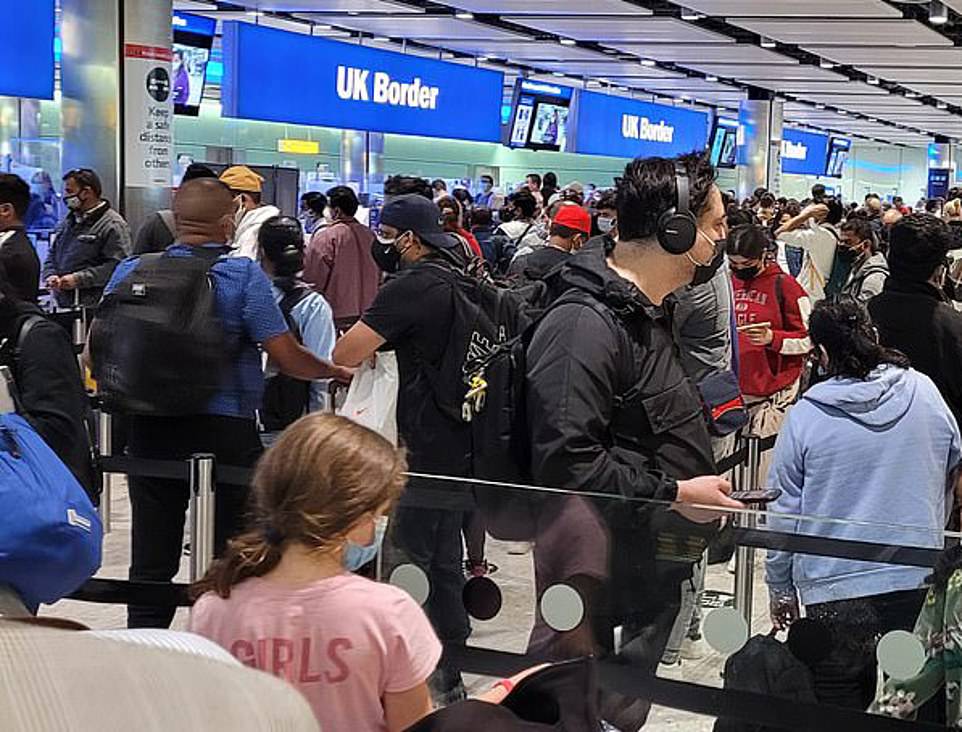 One of its main selling points is the lack of queuing at airports upon arrival. London Heathrow Airport is pictured last month

‘Then, as travel restrictions started to be lifted this year, we have seen a surge of new customers considering flying private for the first time, but still could not move forward with the reservation due to budget constraints.

‘Usually, from the UK, they want to fly to similar destinations – Cannes, Ibiza, Nice. So we decided to make it easier for them to aggregate in groups and split the cost of chartering.

‘By doing so the price per seat start fitting the budget of more passengers. Via our system they can find a flight already open by another person or they can request a new route.’

He added that customers who wish to reserve need to pay a refundable deposit of £30, and then just pay for the remaining amount if the flight is confirmed – if not, they get the deposit back.

Mr Reis also said flights have already been proposed by customers in London to both Athens and Cannes, with trips departing according to demand.

Speaking about the environmental impact, the firm’s business development director Max van Doorne added: ‘We are also aware of the impact on the environment caused by the aviation industry.

‘Private electric planes on a larger scale are unfortunately quite far off. Therefore, Hyer offsets 100 per cent of the emission of its shared flights investing in certified offset projects.’

It comes as Office for National Statistics (ONS) data suggested around one in eight British adults are planning a trip abroad this summer.

Some 12 per cent of adults said they plan to go on a trip abroad before September – and, of these, 71 per cent said this would be for a holiday.

Younger groups were more likely to be planning a trip, 16 per cent of 30-34-year-olds said they plan to do so compared to 8 per cent of adults aged 70 and over.

A traffic light risk-based system with red, amber and green ratings for countries around the world determines the quarantine and coronavirus testing requirements people face when returning to the UK.

The ONS said it collected responses during the week that it was announced that Portugal was to move from the green to the amber list. It analysed responses from 4,153 individuals surveyed between June 2 and 6.

The survey also asked people what measures they would be willing to carry out.

The majority (91 per cent) said they would be willing to wear a face covering while travelling to and from their destination, and provide proof that they had been vaccinated (86 per cent).

Almost three quarters said they would be prepared to take tests before and after travelling (74 per cent) and provide details of their accommodation, travel dates and home address (73 per cent).