Coronavirus UK: ALL should be tested monthly, says Jeremy Hunt

All Britons should be tested for coronavirus once a month and those who get a negative result must receive a ‘freedom pass’, Jeremy Hunt has said.

The former health secretary has called on ministers to come up with ‘proper incentives’ for people to get tested, self-isolate and receive a vaccine.

His suggestion follows recommendations by behaviour experts advising Downing Street, who said those not infected with the virus should be handed paper wristbands to allow them to return to a more normal life.

The Behavioural Insights team, also known as the ‘Nudge Unit’, also suggested lotteries at testing centres and paying for people’s travel if they go to get tested.

Mr Hunt today pointed to the example of Slovakia’s mass coronavirus testing scheme, where all the countries residents aged between ten and 65 – almost four million people – were swabbed for the virus over a single weekend.

Those that tested negative were presented with a paper certificate and told they no longer needed to follow rules ordering them to stay home.

The UK is also planning to roll out a nationwide mass testing scheme to beat the virus – called ‘Operation Moonshot’ – by weeding out infections that aren’t causing any symptoms. 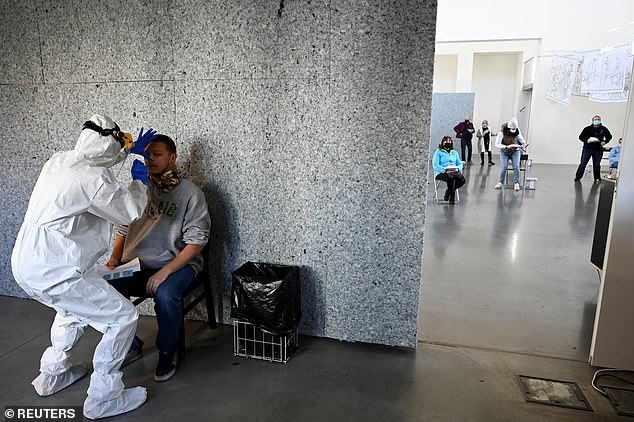 Former Health Secretary Jeremy Hunt said Britons who test negative for Covid-19 should be freed from restrictions. He pointed to Slovakia’s mass testing programme (pictured) where those who tested negative were released from lockdown rules

In Slovakia, everyone who tested negative was handed a paper certificate (pictured)

Writing in The Times , the chair of Parliament’s Health and Social Care Committee said Britain should ‘go further’ to encourage more people to get tested for Covid-19.

He warned although the country has a Plan A to end the pandemic – a vaccine – it also needs a watertight Plan B.

‘We should go further, offering people who comply with testing and isolation requirements a “freedom pass” that removes the requirement to follow lockdown regulations,’ he wrote.

‘In Slovakia they gave those with negative results a certificate that released them from curfew and allowed them to go out, shop, and go to work.

Experts are divided on whether mass testing should be carried out in Britain to screen for coronavirus.

The plans – dubbed ‘Operation Moonshot’ – have been touted by ministers as a sure way to get the country back to normal.

But scientists have sounded a note of caution warning there is ‘insufficient evidence’ mass swabbing will stop the spread of the virus.

‘We do not know, based on current evidence, whether screening the general population for SARS-CoV-2 will increase or decrease disease transmission, hospitalisations, and deaths,’ she said.

The Government is using lateral flow tests in its pilot in Liverpool which, although rapid, are thought not to be as accurate as the current PCR swabs.

Jon Deeks, professor of biostatistics at Birmingham University, told the BMJ while there was a low rate of errors ‘the number of false positives can still outnumber the number of cases detected’.

‘This meant 97 per cent of the eligible population was tested.

‘We should do the same in the UK, using the NHS Covid-19 app to record who has been tested and who has received the vaccine.’

He added putting these plans in place would mean the Government could ‘set a date’ to get back to ‘some kind of normality’, which could be ‘perhaps as soon as Easter’.

The Oxford coronavirus vaccine was yesterday revealed to have triggered a ‘robust’ immune response to the virus, raising hopes the UK could soon be lifted out of the pandemic.

It is the third vaccine to be shown to have triggered antibodies against the virus, after Moderna and Pfizer both said their jabs could be up to 95 per cent effective.

The UK has ordered 40million doses of the Pfizer vaccine, some of which are expected to arrive and be administered as early as next month – should they be approved by regulators.

The elderly and healthcare workers are first in line to receive them, with the rest of the population expected to follow later.

Having a vaccine that is up to 90 per cent effective is vital, because it means it can trigger the production of antibodies stopping the virus sparking an infection in up to 90 per cent of those that have received it.

Scientists warn at least 60 per cent of the population needs to be immune to the virus to achieve herd immunity – a state when a virus cannot spread through a community, protecting the most vulnerable from the virus.

A vaccine is considered to be a sure way to end the pandemic because it primes the body to fight off the infection. This stops those who are exposed to the virus from catching it, getting sick, and ending up in hospital.

After observing mass testing in Slovakia, the Cabinet Office’s Behavioural Insights Team, said the UK needs to create incentives for people to get tested for the virus.

As well as suggesting paper bands, they also said lotteries could be rolled out at testing centres alongside partnerships with local businesses and subsidies for travel to testing sites.