Healthcare workers from black, Asian and ethnic minority (BAME) backgrounds are twice as likely to catch coronavirus, a study suggests.

Researchers swabbed 10,000 NHS staff for the infection and tested their blood for antibodies, which signal if they’ve ever had the disease.

Some 14.7 per cent of BAME workers tested positive for the virus, rising to 17 per cent when only black and Asian staff were included.

By comparison, only 8.7 per cent of their white counterparts at Oxford University Hospitals NHS Foundation Trust produced positive results.

Trust bosses said ‘special steps’ had been taken to ‘ensure all BAME staff working at OUH feel safe and supported’ on the back of the results.

The study also found porters and cleaners were twice as likely to catch coronavirus than staff in intensive care units.

It follows a mountain of evidence showing BAME Brits are more likely to contract the disease and die from it than white people.

Scientists have yet to pin down exactly why minority groups are at a heightened risk of infection.

But they believe it may be partly explained by the minority groups being more likely to live in deprived areas and use public transport – but experts say this can’t explain the whole story and increased rates of vitamin D deficiency among minorities are being investigated.

At least 300 healthcare staff have died from coronavirus so far, and people from black and ethnic minority groups have been disproportionately affected. Pictured are some of the BAME healthcare staff who fell victim to the disease

The Oxford study, yet to be published in a journal and scrutinised by other scientists, tested a total of 10,610 staff between April 23 and June 8.

The scientists combined data from both PCR swabs and antibody blood testing programmes.

Results showed 11 per cent of all staff had had coronavirus at some stage, with the figure rising to 21 pre cent for staff working on Covid-19 wards.

People from ethnic minority backgrounds make up a large amount of the NHS workforce.

This exposes them to bigger loads of the virus more often because they come into face-to-face contact with gravely ill patients.

People from poorer backgrounds are also more likely to use public transport more often and live in crowded houses – driving up their chance of catching and spreading the virus.

It also found a disparity in infection risk in different hospital departments.

Those working in busy acute wards had the highest portion of positive tests (27.4 per cent) followed by porters and cleaners (18 per cent).

Intensive care (9.9 per cent) and the emergency department (12.1 per cent), had lower rates of infection.

Terry Roberts, chief people officer at OUH, said ‘special steps’ have been put in place by the trust to support and protect BAME staff.

They have been added to the ‘at risk’ group and many are being asked if they wish to be moved onto Covid-free wards.

Mr Roberts added: ‘We also set up listening sessions to ensure that BAME staff could highlight any concerns they had.’

OUH said that, based on the findings, an infection prevention and control plan to minimise the spread of Covid-19 among staff and patients has been put in place.

Professor Meghana Pandit, chief medical officer of OUH, said: ‘We have drawn up recommendations for all staff across our four hospital sites, including portering and cleaning colleagues.

‘This has included staff continuing to use level 1 PPE for all patient contacts, and reinforcing PPE-focused training and safety huddles; ensuring strict social distancing and mask-wearing for patients and staff; continuing to triage patients according to symptoms of possible Covid, including atypical presentations in the elderly; reviewing cleaning procedures; and maximising OUH’s rapid diagnostics and lab capacity.’

It comes after an Oxford study found pregnant women from black, Asian and ethnic minority (BAME) groups are up to eight times more likely to be hospitalised with Covid-19 than white women.

NHS England is now recommending BAME mothers-to-be with mild Covid symptoms be fast-tracked into hospital due to their heightened risk of falling critically unwell.

The move follows an Oxford University study earlier this month that looked at 427 pregnant women admitted with the disease between March 1 and April 14, when the virus was growing exponentially in the UK.

More than half of patients were from a BAME background, despite only accounting for a quarter of the births in England and Wales.

The study found black mothers-to-be were eight times more likely to be admitted than white pregnant women, and the risk for Asians was quadruple that of whites. 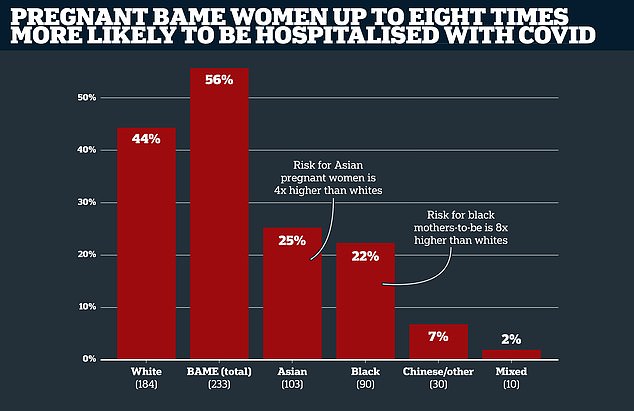 Pregnant women from black, Asian and ethnic minority (BAME) groups are up to eight times more likely to be hospitalised with Covid-19 than white women, a study of 427 expectant mothers struck down by the virus found

NHS England is now telling doctors to ‘lower the threshold’ for admitting them to hospital due to the heightened risk.

It is also urging midwives to provide tailored support and advice to pregnant women from BAME backgrounds and discuss vitamin D supplementation.

The Oxford study, published in the British Medical Journal (BMJ), follows a string of damning research showing BAME groups are being disproportionately hit by Covid.

Scientists believe it may be because minority groups in the UK have considerably higher rates of health problems that raise their risk of catching a severe bout of Covid-19, such as diabetes and high blood pressure.

Links to higher rates of vitamin D deficiencies are also being investigated by health chiefs in the UK.

People with darker skin need to spend more time in sunlight in order to get the same amount of vitamin D as a person with lighter skin, which makes BAME people living in Britain more likely to be deficient in the vitamin.

Currently the NHS recommends Brits take 10 micrograms of the ‘sunshine’ nutrient each day during lockdown ‘to keep your bones and muscles healthy’.

But it says on its website that ‘there is currently not enough evidence to support’ claims that the immune system-boosting nutrient reduces the risk of coronavirus.