Domino’s Pizza staff have been pictured at branches preparing food without gloves or masks, raising fears about the safety of takeaways during the coronavirus pandemic.

Kitchen staff and delivery drivers at the stores in Southampton were seen working in close proximity to one another, as the firm remains open despite the likes of McDonald’s, Pizza Express and KFC closing all stores.

Other staff were seen at a branch in Folkestone, Kent, on March 27 not wearing gloves or keeping to 6ft social distancing rules, in a video filmed by a former worker who said they had ‘left for my safety until this is all over’.

It follows the death of Domino’s worker Mofizul Islam, 49, who worked at the takeaway restaurant in Eskbank, Midlothian. Mr Islam had stopped working after the government announced the lockdown and died last week.

Domino’s – whose new chief executive Dominic Paul has joined midway through the crisis and started the job only last Monday – said the chain has ‘increased’ its sanitisation of food preparation areas, door handles and hot bags.

The company also claimed that the Government had ‘asked Domino’s stores to remain open and provide local communities freshly made pizza to help boost morale and keep people safe at home’.

Three weeks ago on March 23, the Government ordered all non-essential shops to close as part of a lockdown – but allowed pubs and restaurants to operate as hot food takeaways to serve people having to stay at home.

Offical advice on takeaways and deliveries was that they could ‘continue to operate but should follow social distancing guidance – including not inviting customers inside to wait, with ordering by phone strongly advised.’ 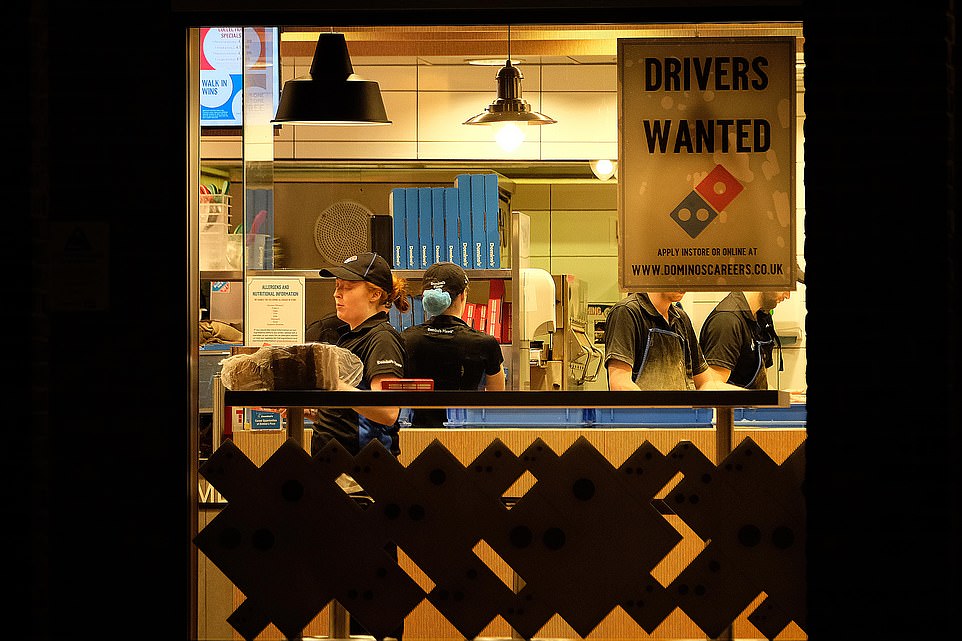 The delivery firm has remained open in the face of the pandemic, despite outlets including McDonald’s and KFC shutting 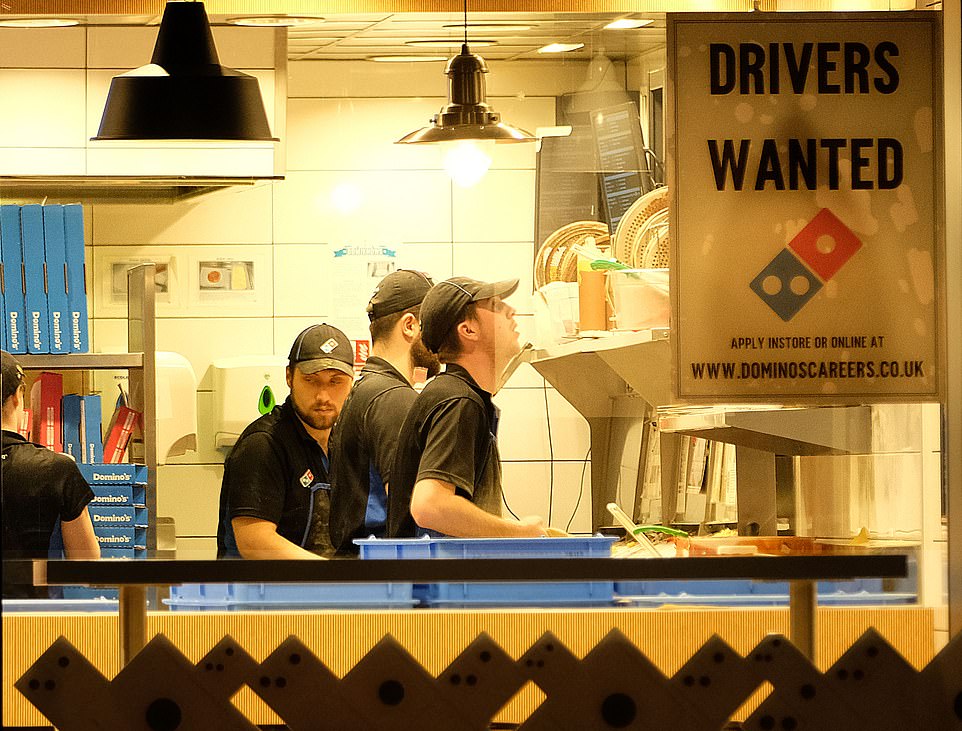 Domino’s said it has ‘increased’ its sanitisation of food preparation areas and door handles. Staff in Southampton are pictured 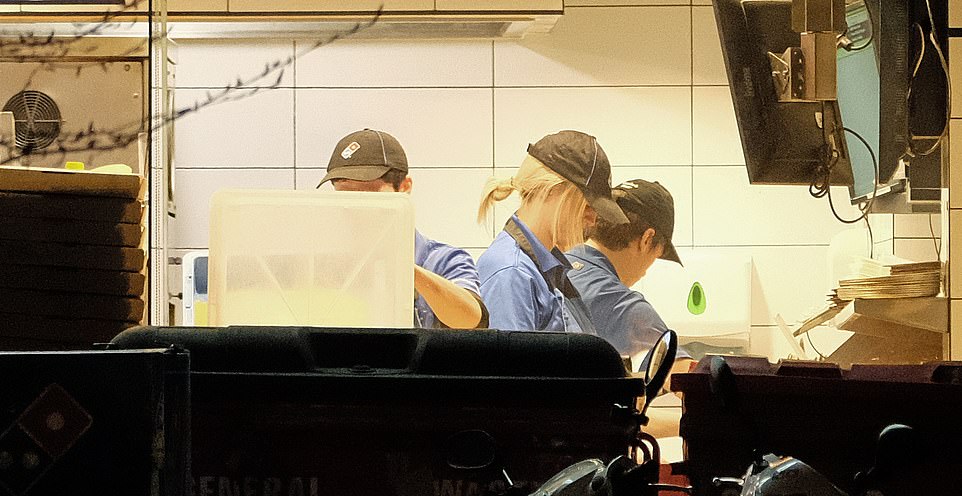 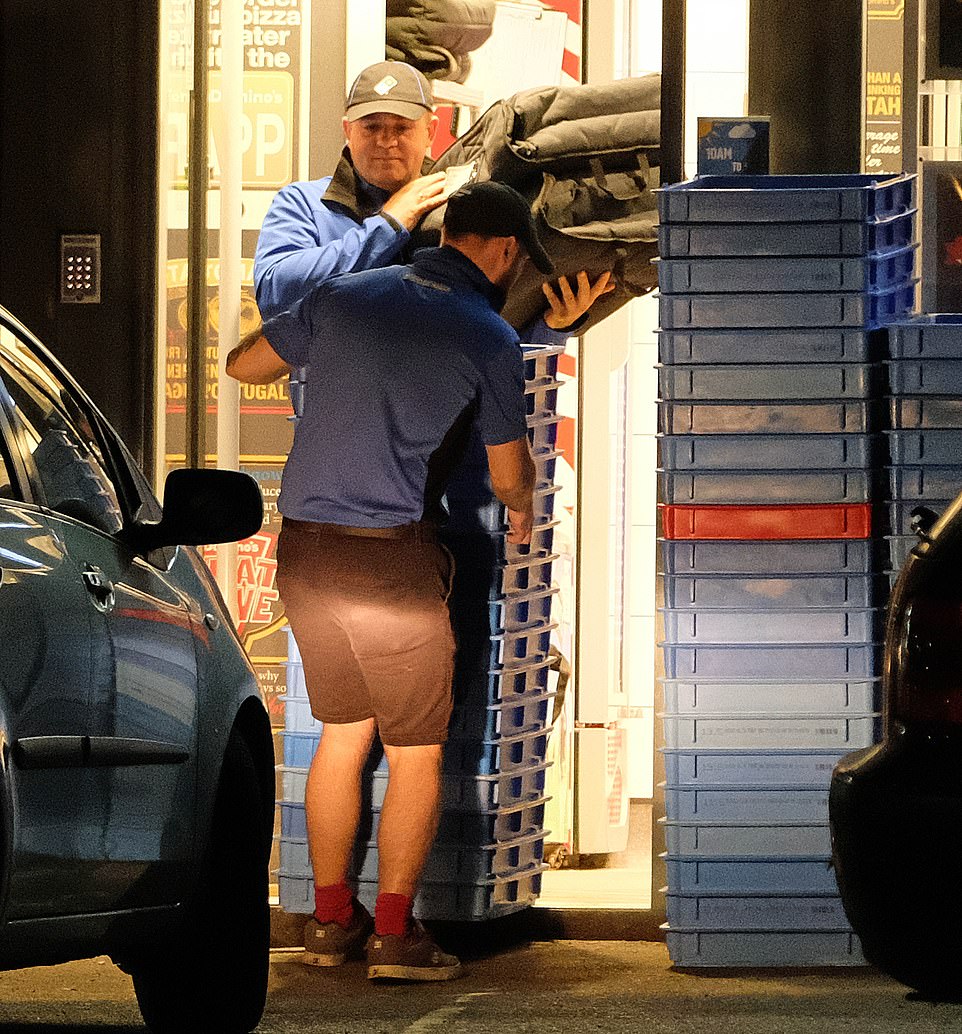 Domino’s, pictured in Southampton, said it was following advice from the World Health Organization and the Government

Takeaways and deliveries can continue as long as people follow guidance on social distancing. The Government’s advice is that people can still get food delivered to them, but ordering by phone is ‘strongly advised’.

Domino’s Pizza appointed the former boss of Costa Coffee as its new chief executive on March 31, four days after Britain was put under coronavirus lockdown

Dominic Paul took over after leading the coffee chain through its growth spurt ahead of its £3.9billion sale to Coca-Cola by former owner Whitbread last year.

While in that post he introduced a drive-through and Costa Express service while restructuring the coffee shop’s international arm.

Mr Paul, who started at Domino’s on April 6, is dealing with a long-running battle with unhappy franchisees, who have been asking for a bigger slice of profits.

His appointment at Domino’s was announced during the coronavirus pandemic, but made after the Government said on March 23 that pizza takeaways could stay open.

He takes over the reigns from former boss David Wild, who announced last year that he planned to step down.

It marks the second appointment to the pizza maker’s top team in the past month after it made Beam Suntory executive Matt Shattock its new chairman in March.

The company is also yet to replace former finance director David Bauernfeind who died in a Boxing Day accident last year while on holiday with his family.

Domino’s said it was following the advice from the World Health Organization, Public Health England and the government, which recommends medical masks should be used by healthcare workers and people with symptoms of covid-19.

A spokesman for Domino’s told MailOnline: ‘The Government has asked Domino’s stores to remain open and provide local communities freshly made pizza to help boost morale and keep people safe at home.

‘The safety of colleagues and customers is Domino’s top priority so we’re working closely with Government and our environmental health authority, who has approved our colleague and customer safety plans.

Domino’s said it asked staff to frequently wash their hands, rather than wear latex gloves, ‘which can spread germs if not used properly and changed frequently.’

Restaurants and pubs were ordered to close during the coronavirus lockdown, but many have been allowed to repurpose their businesses as takeaways.

Government guidance says people can still access their local takeaway, but people are not allowed to consume any food or drinks on the premises. 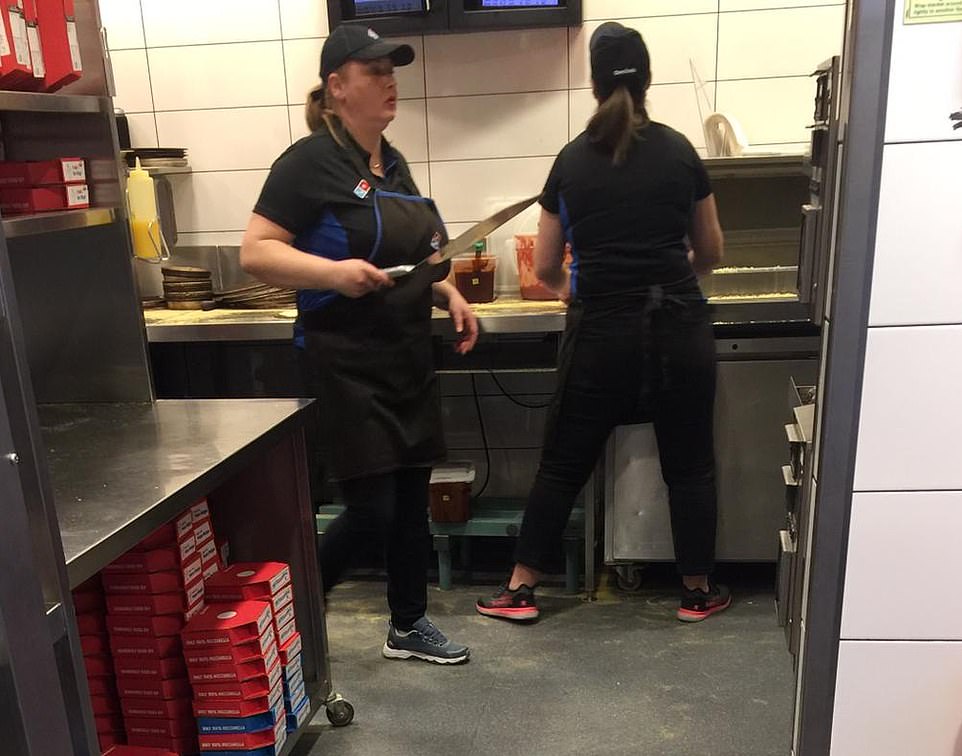 Staff at a branch in Folkestone, Kent, on March 27 while not wearing gloves or respecting social distancing guidelines 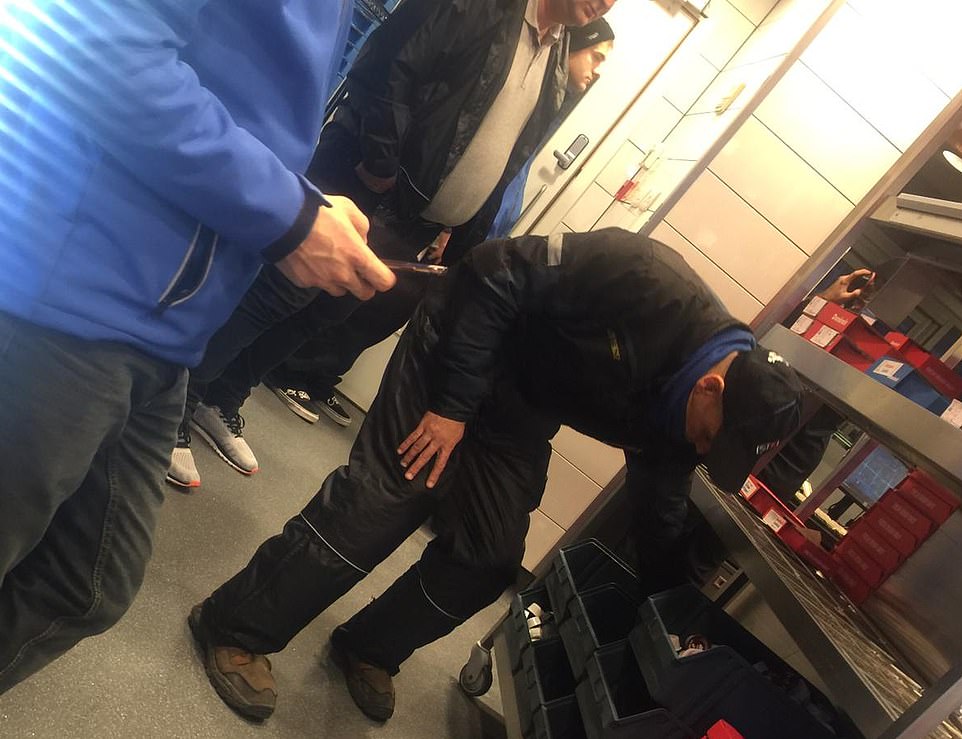 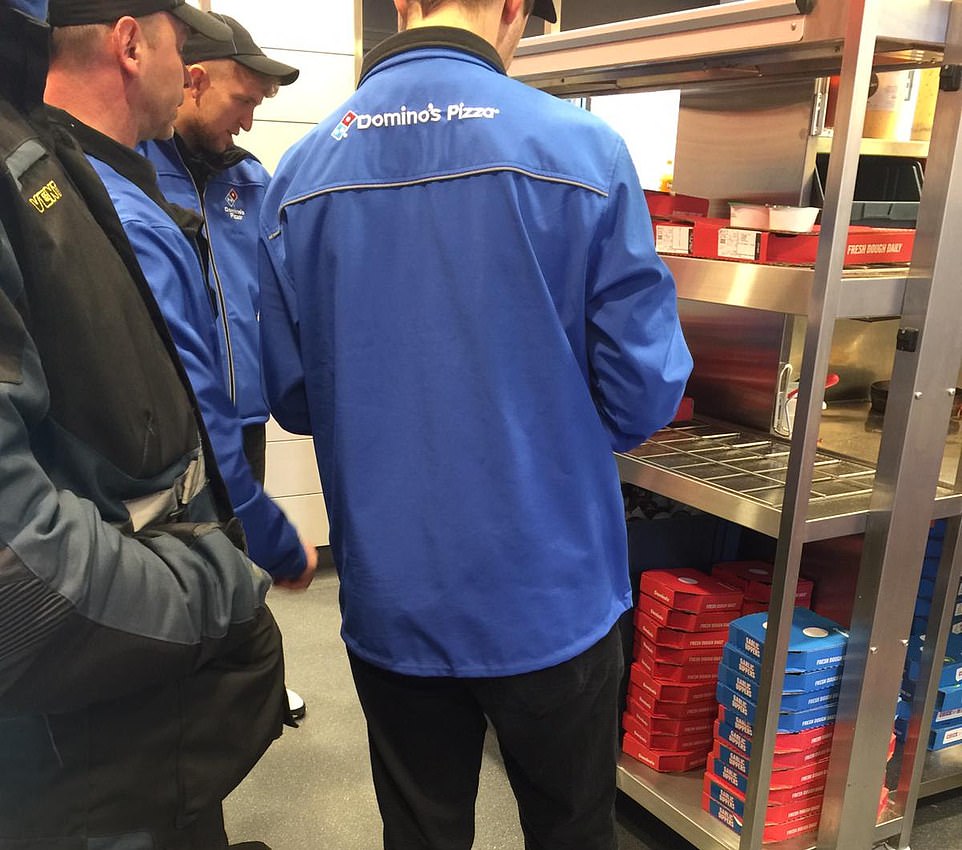 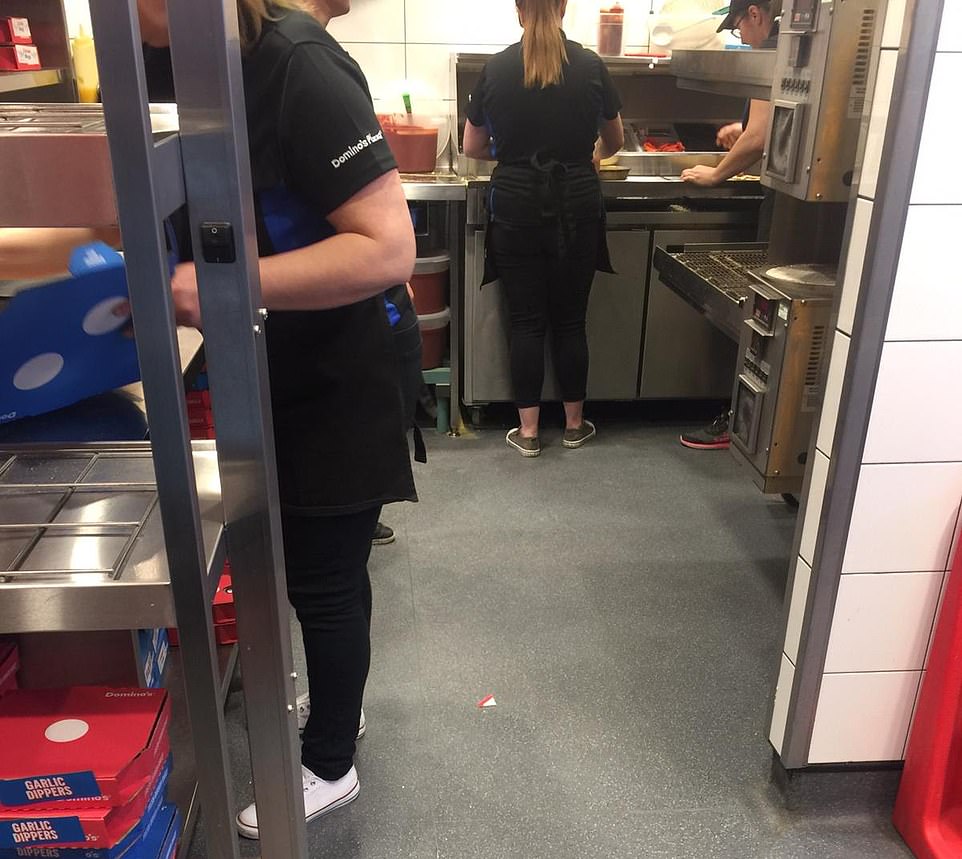 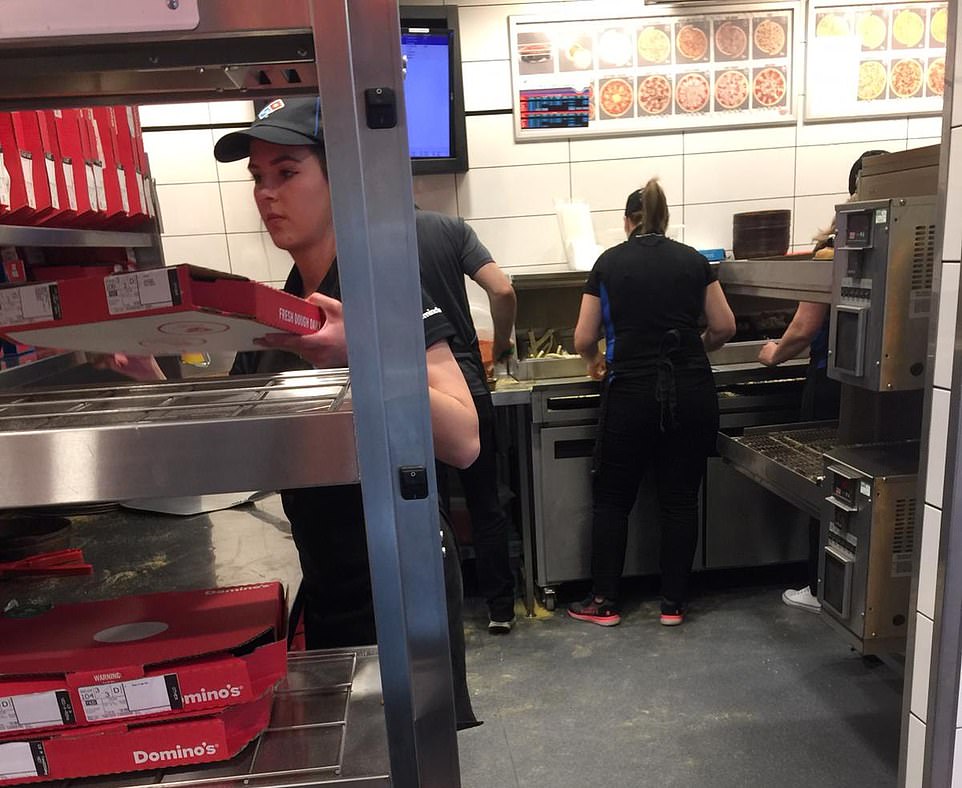 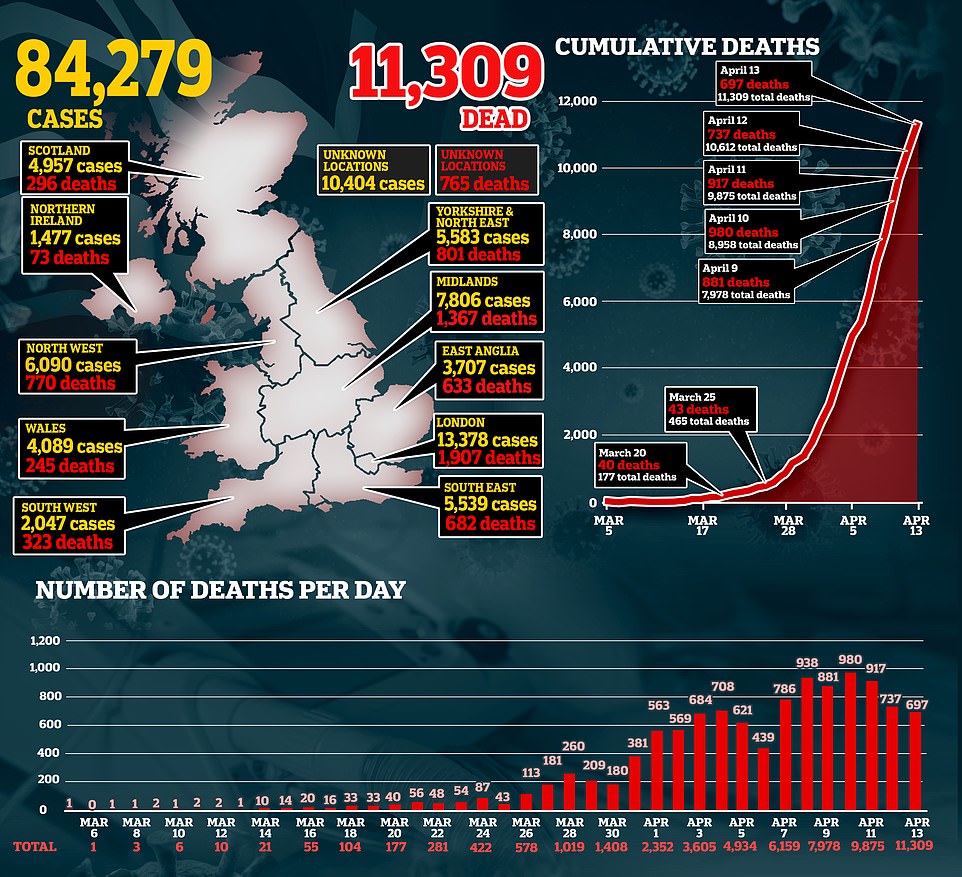 ‘Whether you prefer delivery or carry out from the store, we still offer easy ways to get you delicious pizza, including our new contactless delivery option to minimise contact between you and your delivery experts.’

Fast food favourites, including McDonald’s, Nandos, Greggs and Pizza Hut almost immediately closed their doors after the Prime Minister ordered the closure of pubs, cafes and restaurants on March 23.

However a number of fast food outlets are still serving the public. Takeaways available on Just Eat include local stores as well as well known names including Papa John’s, Pizza Hut and Domino’s Pizza .

In a separate post, the chain tweeted a photo explaining safety measures being taken its staff.

Last week Domino’s said it had seen a massive spike in sales as customers stuck at home order in pizza. Order sizes have also grown.

A Domino’s spokesman said Mr Islam had not worked for Domino’s since March 22, having decided not to come into work following the government’s nationwide lockdown.

The Government advice on takeaways and deliveries is: ‘These can continue but please follow Public Health England guidance on social distancing – including not inviting customers inside to wait. Ordering by phone strongly advised.’