Leicester’s mayor has slammed Matt Hancock’s decision to only partially ease the city’s lockdown and accused the government of ‘party political’ aims after restrictions were focused on areas run by Labour and the Lib Dems.

The Health Secretary announced this evening that only schools and nurseries will be allowed to reopen from next Friday, July 24, with the rest of the city still facing a raft of limitations on their freedom.

Leicester has now been under stricter rules than the rest of England for two weeks, and it must mostly remain so for another fortnight, Mr Hancock said.

In an urgent statement to the House of Commons, he said the coronavirus infection rate in the city is still too high for lockdown to be lifted.

Whether shops could reopen was less clear and Mr Hancock said there would be ‘targeted decisions’ that would allow them to be closed on a case-by-case basis.

But people remain sealed off and must still avoid non-essential travel out of the area, stick rigorously to social distancing rules and not enter other people’s homes.

Mayor Sir Peter Soulsby was critical of the decision to keep restrictions in force across the Labour-run city of Leicester and Liberal Democrat-controlled Oadby and Wigson. 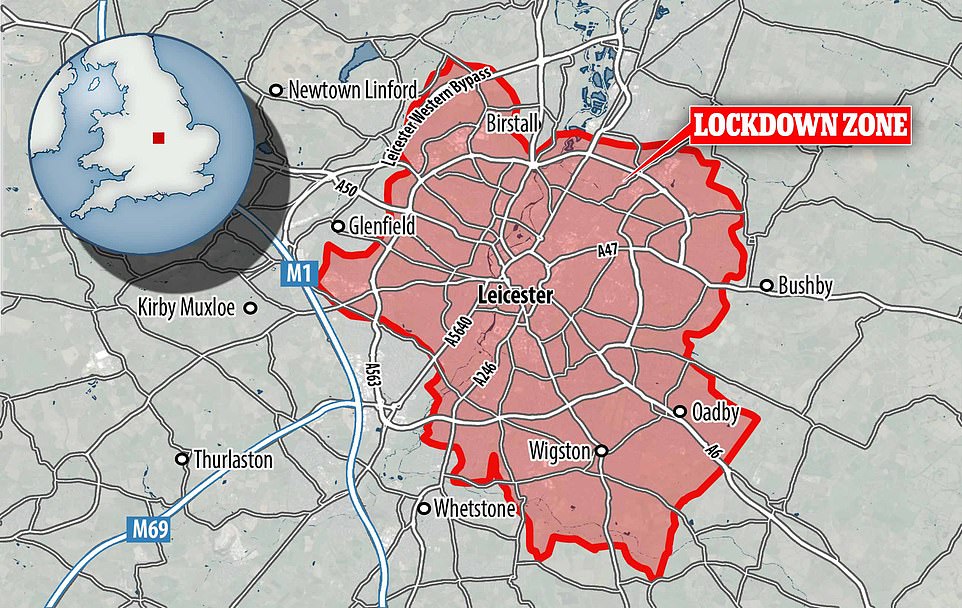 A map outlining the new boundaries of the local lockdown in Leicester, which Matt Hancock announced will come into effect on July 24 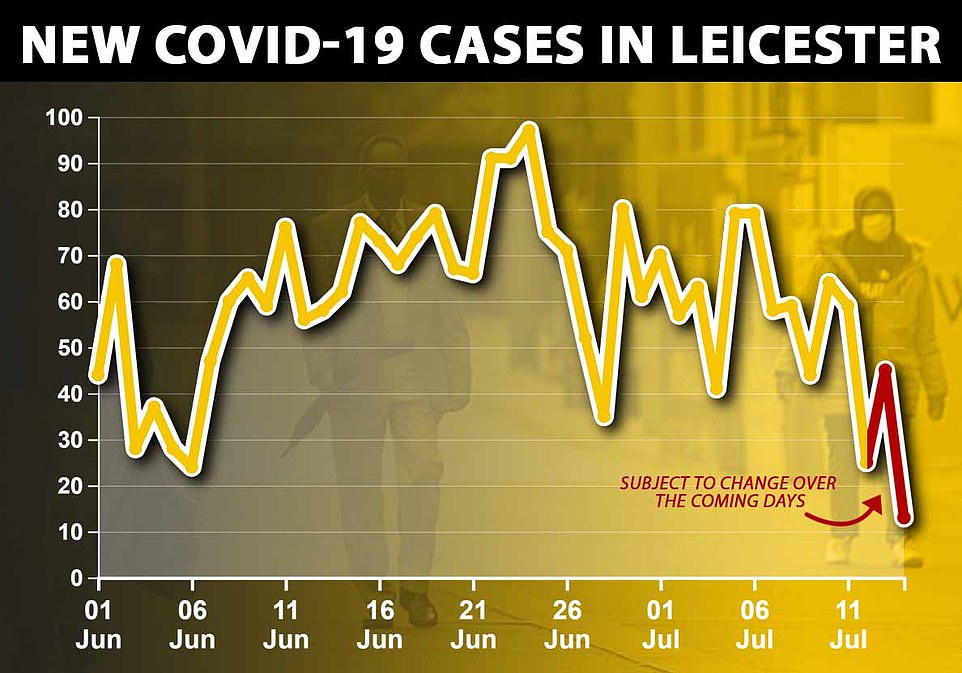 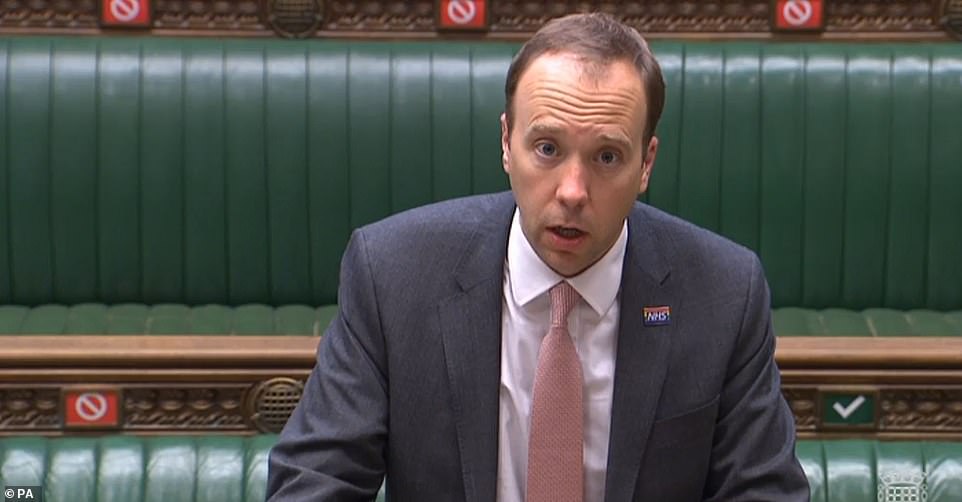 ‘They have left two areas in there – one that has a Liberal Democrat council, the other that has a Labour mayor.’

Sir Peter added: ‘The fact is they have focused in a way that is clearly party political and that’s not a way to deal with the virus.

‘Because right at the start of this, there were promises from the Secretary of State that there would be a financial package – compensation scheme – for our businesses that are being held back.

‘Now two weeks on, he’s still not delivering on that promise.

‘That obviously is a matter of great concern to me and those who care about the future wellbeing of this city.’

In the rest of England all non-essential shops, pubs, restaurants and cafes have been allowed to open since July 4, but this will now not happen in the Midlands city until the end of this month at the earliest.

Mr Hancock said the Covid-19 infection rate in Leicester has dropped to 119 cases per 100,000 people.

It was 135 per 100,000 when the lockdown was introduced on June 30, which was three times higher than the next worst-hit city.

The Health Secretary said he ‘paid tribute’ to the ‘fortitude’ of people living in Leicester and said it was their co-operation that would help stamp out the virus.

Mr Hancock said: ‘The latest data shows that the seven-day infection rate in Leicester is now 119 cases per 100,000 people and the percentage of people testing positive is now at 4.8 per cent.

‘These are positive indicators, especially in light of the huge increase in testing.’

WHAT CAUSED A SPIKE IN CASES IN LEICESTER?

Government officials, local politicians and scientists were initially divided over whether Leicester was experiencing a real surge in cases or whether better testing was simply finding more of them where it wasn’t before.

It is also not clear whether there are any characteristics of Leicester which make it more likely to see a surge in cases, or if random chance has meant the first ‘second wave’ is happening there.

Experts say many of the risk factors in Leicester are the same in all major cities in England.

The mayor of the city, Sir Peter Soulsby, said on BBC Radio 4 that a report sent to him by the Government ‘actually acknowledges that it’s very likely that the increase in number of positives identified is a result of increased testing, and that actually there’s perhaps nothing of any great significance in those results.’

Director of Public Health for the city, Ivan Browne, said: ‘Interestingly it [the surge in cases] is very much around the younger, working age population and predominantly towards the east part of our city. We started to see this level through our testing programme.

‘Young people work in many industries across the city so at this stage what we’re trying to do is gather as much epidemiological information as we can to really try and get underneath and have an understanding. I don’t think at the moment that we are seeing a single source or a single smoking gun on this’.

It was always likely that surges in cases would be seen in cities first. There are more people, raising the risk, and those people are more likely to live in densely populated areas and come into contact with strangers on a regular basis.

Dr Shaun Fitzgerald, from the University of Cambridge, said: ‘There will be differences in the ease with which people can maintain physical distance between densely populated areas and rural environments – so it isn’t surprising to me that we may see localised flare-ups, which in turn may need suppressing through delayed easing or temporary re-introduction of some constraints on some movements and activities.’

Leicester also has high levels of deprivation, which affects people’s lives in ways that put them at risk of catching the virus.

The Samworth Brothers sandwich factory in the city reported over the weekend that it had diagnosed cases of Covid-19 among its staff.

Food processing factories are a higher transmission risk because cold environments allow the virus to survive for longer on hard surfaces and make people’s airways more susceptible to infection.

He compared the figures to when the lockdown was imposed and the seven-day infection rate was 135 and 10 per cent of tests were positive.

He added: ‘I committed to reviewing the measures in Leicester every two weeks.

‘This morning I chaired a gold meeting of the local action committee to discuss the latest situation and this afternoon I held a further meeting with local leaders, Public Health England, the JBC, the local resilience forum and my clinical advisers.’

Mr Hancock added: ‘Some say the local lockdown is unnecessary.

‘I wish this were true but sadly it remains vital for the health of everyone in Leicester, and the rest of the country, that these restrictions stay in place. We will review them again in a fortnight.’

The mayor of the city, Sir Peter Soulsby – who is a Labour politician – will be unhappy with the decision.

He said earlier today that he was ‘angry and frustrated’ with the far-reaching rules in place across the city and that 90 per cent of the area was not a danger.

Speaking on Sky News this morning, Sir Peter criticised what he described as the Government’s ‘blanket political-led lockdown’ of the whole of the city, and said he was angry and frustrated.

He said: ‘Frankly we have not been involved in any of the decision-making about this.

Asked what his reaction would be if the Government announced a further two-week lockdown – which it now has, for the most part –  the city’s mayor said: ‘I think if we are told that, there are going to be an awful lot of Leicester people who are very angry indeed.

The mayor had said inner-city areas of Leicester with high levels of deprivation are the ‘most significantly’ affected by coronavirus and keeping the remaining 90 per cent of the city under lockdown is no longer justified.

Leicester became the first place in the country to have tight measures re-imposed on June 30 following a rise in coronavirus infections.

Officials realised that people were getting infected at alarming rates in certain parts of the city and the only option was to send the area back into lockdown.

When the spike began, however, experts said they always expected it to happen in a city and that a blue collar one like Leicester was a greater risk than somewhere like London or Manchester where more people do office jobs and worked from home.

Leicester, as a city with high levels of deprivation, is also densely populated meaning people come into contact with strangers more often. 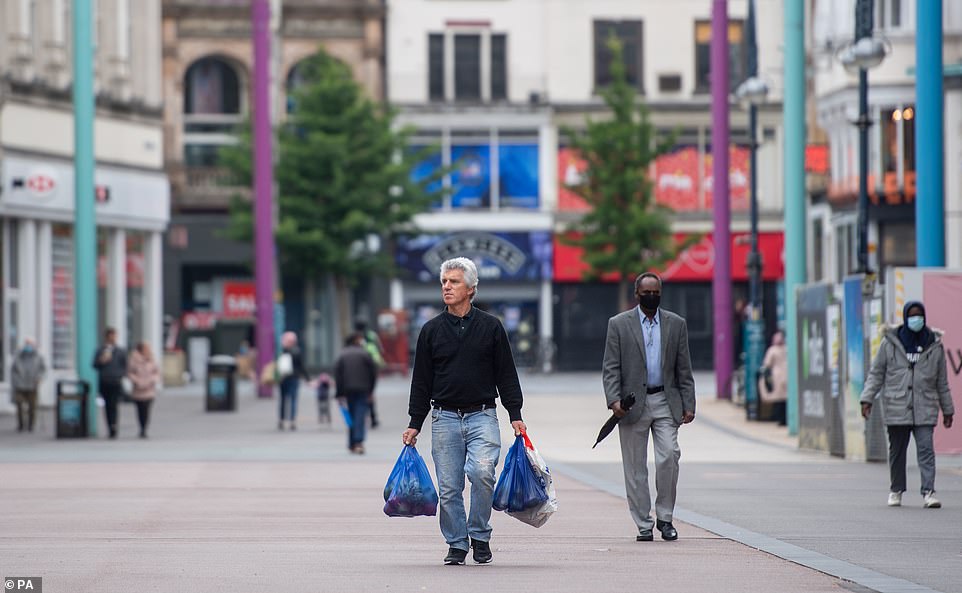 Leicester must spend another two weeks in a tighter lockdown than the rest of England, Health Secretary Matt Hancock announced today (Pictured: People walking through the city centre) 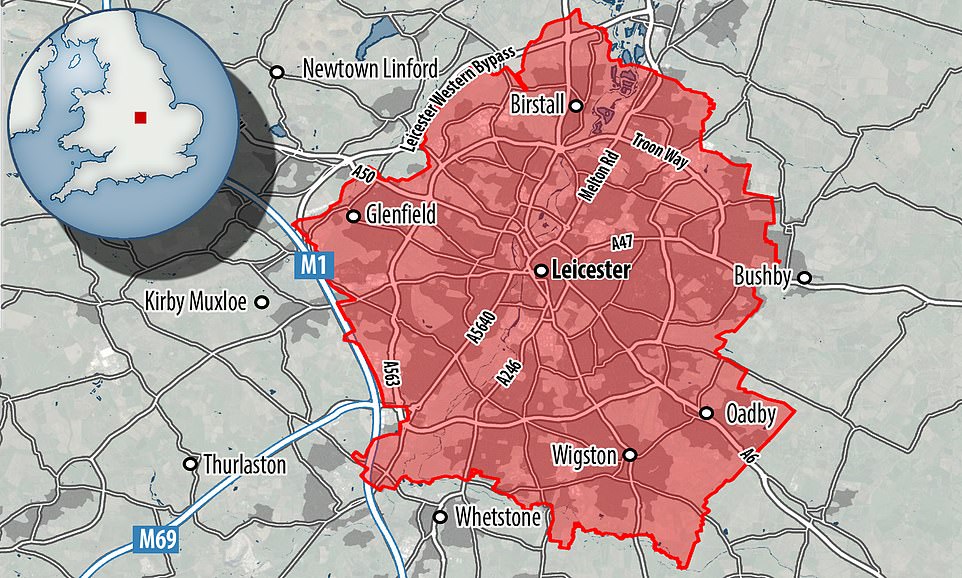 This was the area around Leicester that first went into lockdown last month when officials realised cases were dangerously high in the city. Restrictions may now apply to a smaller area – incorporating the city centre and Oadby and Wigston only