The government will not vary the lifting of coronavirus lockdown by region, despite the R infection rate varying widely in different parts of the UK, the business minister confirmed today.

Speaking at the latest Downing Street press conference, Alok Sharma said the government would be sticking with its national approach to the lockdown.

The Secretary of State for Business, Energy and Industrial Strategy added that it was ‘too soon’ to discuss a phased lifting of lockdown by region.

Different parts of the UK have a different R rate, which is used to indicate how fast the virus is spreading.

R rates calculated by the London School of Hygiene and Tropical Medicine suggest the East Midlands has the fastest spread of infection, with a rate of between 0.8 and 1.2.

On the other hand, London, which was the hardest hit part of the UK, has a current R rate of 0.5 to 0.8, the lowest in the country.

Coronavirus cases in England and the R infection rate in different parts of the country. The R measures the spread of the virus 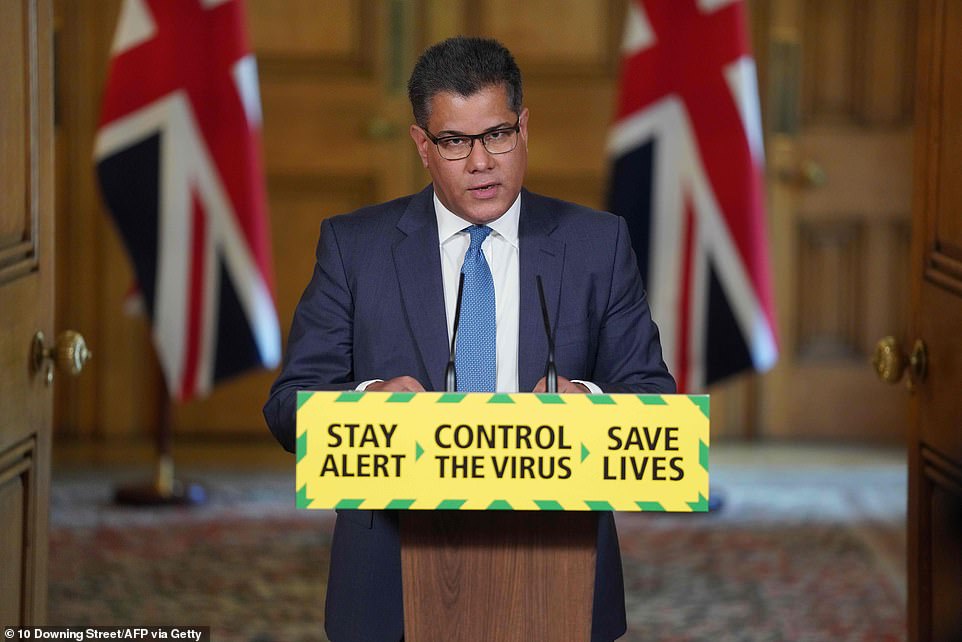 The Secretary of State for Business, Energy and Industrial Strategy Alok Sharma says that it is ‘too soon’ to discuss a phased lifting of lockdown by region

It has led to speculation that different parts of the country could see different forms of lockdown.

However, responding to a member of the public who asked if a phased lifting of lockdown would be better based on the virus reproduction R number regionally, Mr Sharma said it is ‘too soon’ and the Government is sticking with its national approach.

NHS England national medical director Stephen Powis added: ‘There will be variations between different parts of the country, that occurs naturally in epidemics.

‘We see that, for instance, in flu season each winter.

‘What’s important going forward is increasingly we will be able to measure R direct.’

He said the Office for National Statistics this week published its first direct testing of a random sample of the population and over the next few weeks ‘we will have much better information of the directly measured R rate rather than R rate that is derived from models and other observations’.

‘That I think will give us a clearer picture of exactly how the infection is progressing in different parts of the country’, he said.

Earlier today, new data showed that incidences of the virus vary widely across the country.

Cumberland, Durham, Herefordshire and Norfolk now have 12 times as many cases of coronavirus as counties like Devon, Cornwall and Dorset. 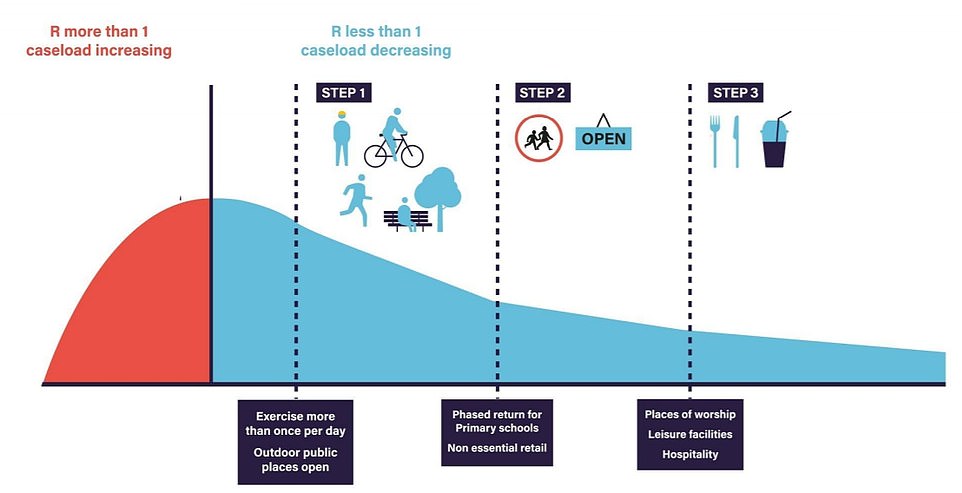 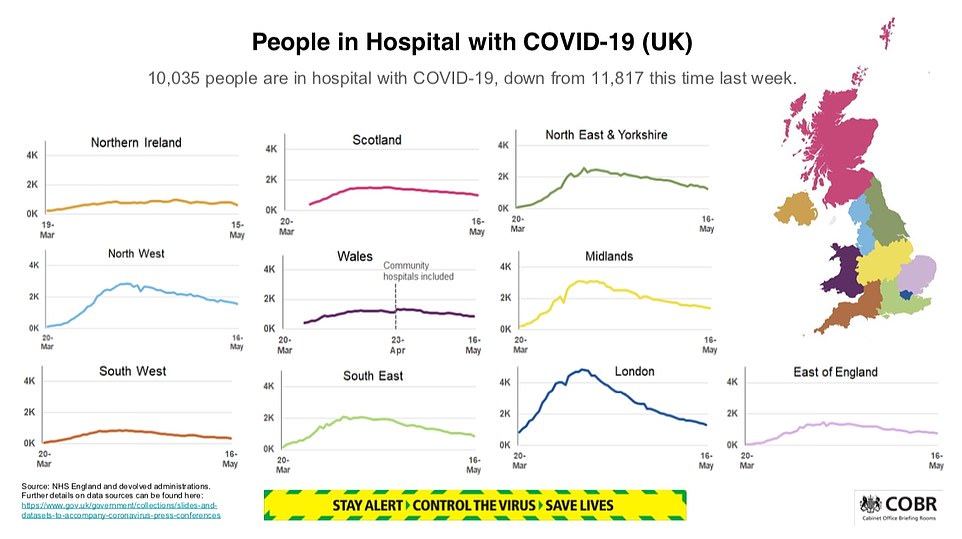 Different parts of the UK have a different level of R. The rate is worked out using confirmed hospital cases. (Pictured are UK hospital patients with coronavirus by region)

George Batchelor, a co-founder of Edge Health, told the Sunday Telegraph: ‘As seen in countries like Singapore, the risk of a surge in new cases can happen even when the virus is under control.

‘These surges, like the increase in cases in the North West of England, tend to be localised. If they are detected early, they can more easily be brought under some control. This requires a flexible regional response.’

The number of coronavirus cases and the R are both being used by the government to judge whether restrictions need to be eased.

If above 1, restrictions may be kept or even strengthened to try and halt the spread of the virus.

The Government is using both case numbers and ‘R’ values to judge the effectiveness of its social distancing measures, which were partially relaxed for the first time last week.

The data calculated by the London School of Hygiene and Tropical Medicine gives R as a range as pinning the rates down precisely isn’t scientifically possible.

There is also real-time lag in cases by about 10 days, which means the latest R rates are from before the easing of restrictions last week.

According to the government’s official coronavirus strategy, social distancing measures may be eased in some regions before others. 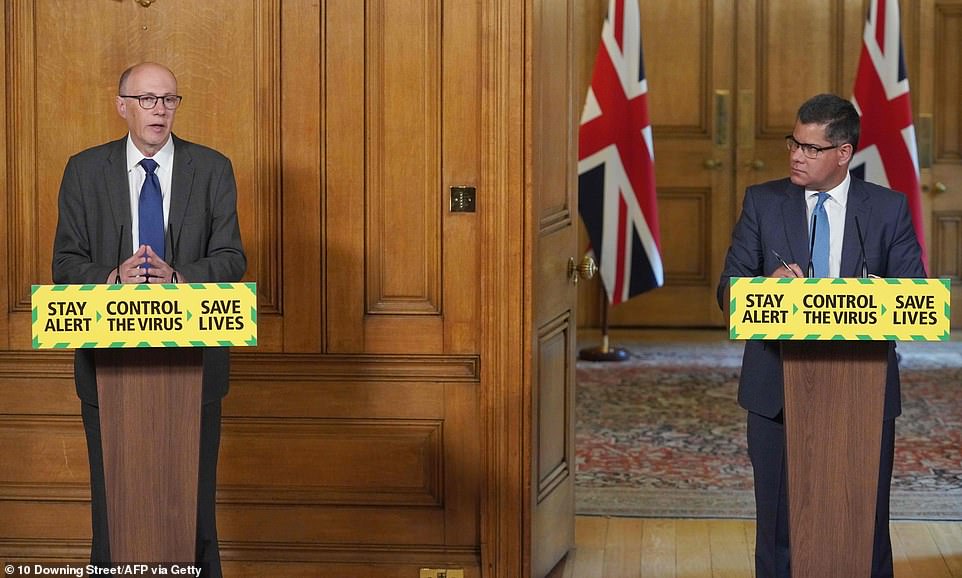 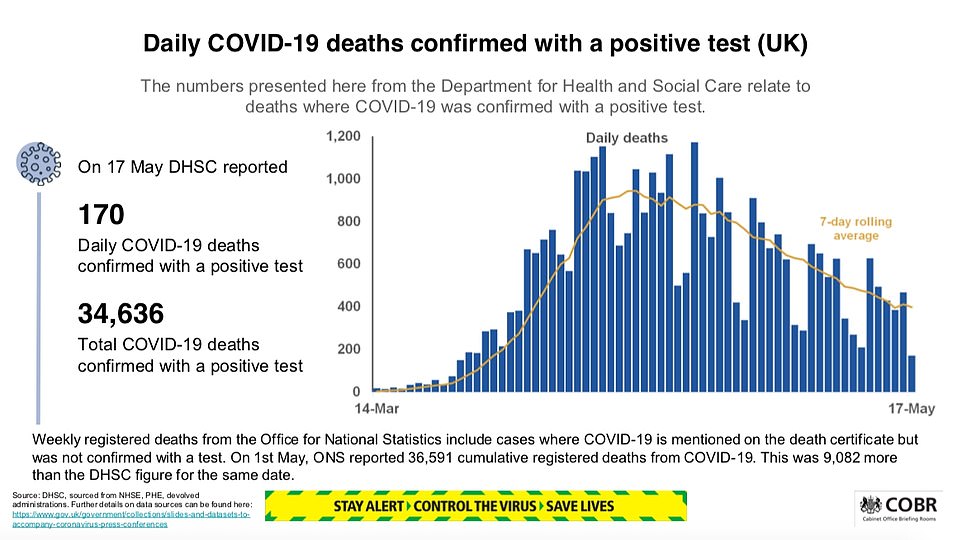 The document reads: ‘Restrictions may be adjusted by the devolved administrations at a different pace in Scotland, Wales and Northern Ireland because the level of infection – and therefore the risk – will differ.

‘Similarly in England, the government may adjust restrictions in some regions before others: a greater risk in Cornwall should not lead to disproportionate restrictions in Newcastle if the risk is lower.

It adds: ‘The government anticipates targeting future restrictions more precisely than at present, where possible, for example relaxing measures in parts of the country that are lower-risk, but continuing them in higher-risk locations when the data suggests this is warranted.’

Britain has announced a further 170 deaths from coronavirus today on the first Sunday since draconian lockdown measures were eased, taking the UK’s total death toll to 34,636.

The latest daily figure is the lowest since March 24, however numbers released on Sunday are usually smaller due to a delay in processing over the weekend.

The drop in death toll marks a 36.8 per cent decrease on last Sunday’s 269 figure.

The numbers follow a tumultuous week for the Government in which approval ratings took a sharp dip after Prime Minister Boris Johnson set out his strategy for lifting lockdown measures.

In this evening’s briefing, which was delayed by 30 minutes, Mr Sharma has said the clinical trial for a coronavirus vaccine at the University of Oxford is progressing well.

During a Downing Street press conference today Mr Sharma also confirmed that Britain would be the first to gain access to the coronavirus vaccine being developed by Oxford University and pharmaceutical giant AstraZeneca.

The Business Secretary also pledged an additional £84 million to the development of the project which is hoped to produce 30 million vaccines for the UK by September if successful.

Mr Sharma said: ‘In order to definitively conquer this disease we need to find a safe, workable vaccine.

‘Last month I announced a new vaccine task force to co-ordinate the efforts of Government, academia and industry in the critical mission to find a vaccine.

‘I’m very proud of how quickly our scientists and researchers have come together in their efforts developing a vaccine that will combat coronavirus.’

He added: ‘The first clinical trial of the Oxford vaccine is progressing well with all phase one participants having received their vaccine dose on schedule earlier this week.

‘The speed at which Oxford University has designed and organised these complex trials is genuinely unprecedented.’

However Mr Sharma also said that there were ‘no certainties’ and there may never be a vaccine developed capable of tackling the virus which has now claimed the lives of 34,636 people in the UK.

As the UK begins to edge out of lockdown, it was revealed that pubs, cafes and restaurants with outdoor spaces could be allowed to reopen in a matter of weeks.

Businesses that hold a licence for outdoor seating will be given government guidance on how to reopen as market-style stalls from June 1, in an effort to get the economy moving and protect the hospitality industry.

Nicholas Boys Smith, the Founding Director of Create Streets, has advised Robert Jenrick, Secretary of State for Housing, Communities and Local Government,  on how best to allow businesses to licence outdoor seating, The Telegraph reported.

However as the country looks to ease out of lockdown, today Dr Hans Kluge, director for the World Health Organization’s (WHO) European region, announced that Europe would have to prepare for a second deadly wave of the coronavirus in the winter. 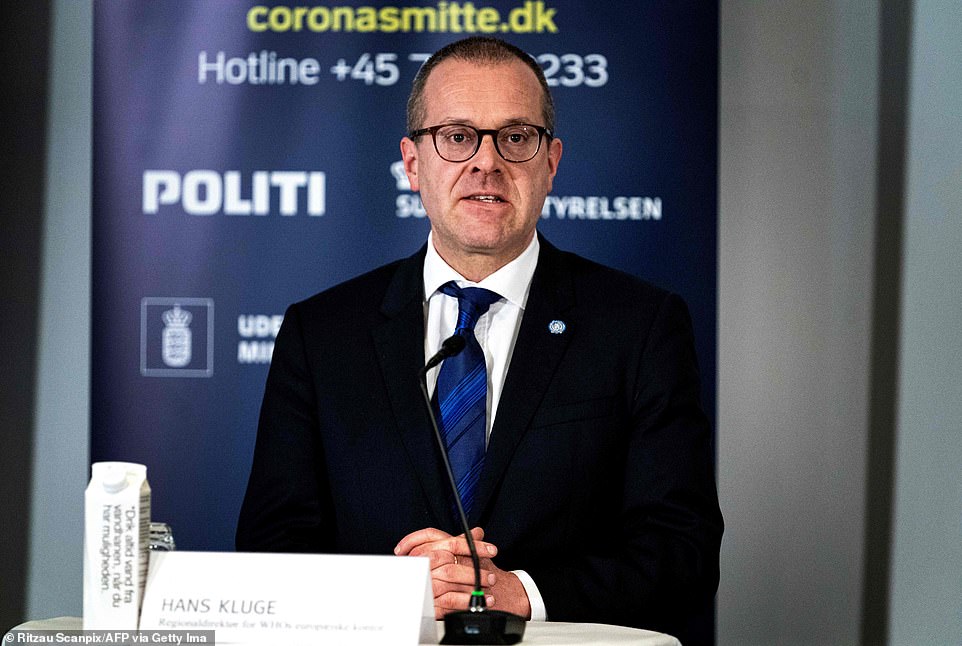 Dr Hans Kluge, director for the WHO European region, announced that Europe would have to prepare for a second deadly wave of the coronavirus in the winter 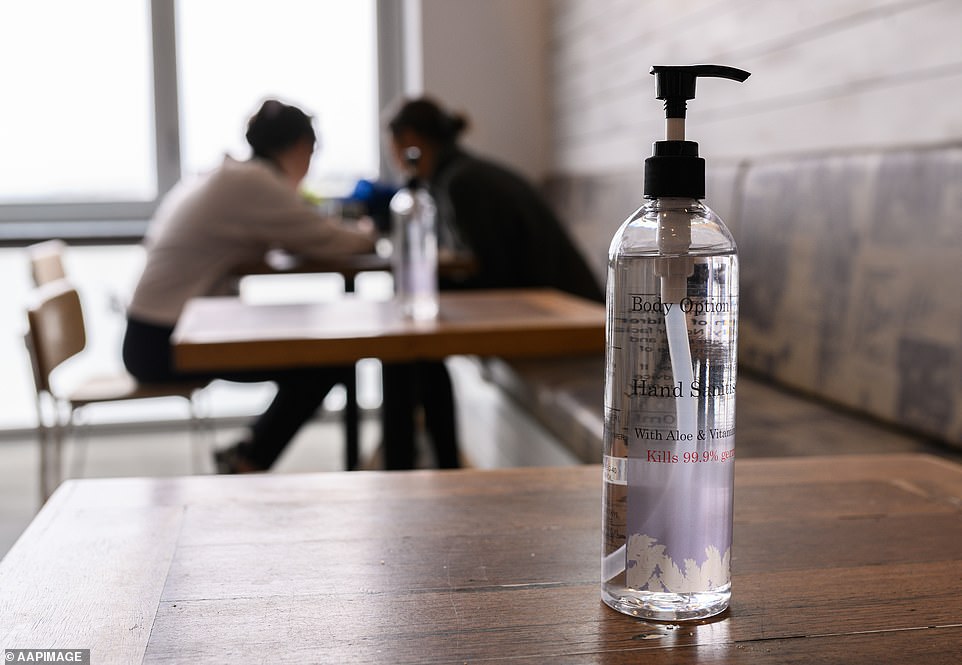 Hand sanitiser is placed on a  table at Speedo’s Cafe in Bondi Beach, Sydney, after Australia begins to allow up to ten people inside restaurants

The WHO chief described being ‘very concerned’ that a surge in infections would coincide with other seasonal diseases and added it was time to strengthen health care systems across the continent by increasing bed capacity.

He also cautioned that now was the time for ‘preparation, not celebration’ across Europe.

Speaking to The Telegraph, he said: ‘Singapore and Japan understood early on that this is not a time for celebration, it’s a time for preparation.

‘That’s what Scandinavian countries are doing – they don’t exclude a second wave, but they hope it will be localised and they can jump on it quickly.’

It comes as the UK today announced a further 170 deaths from coronavirus.

The latest figures, which come on the first Sunday since the lockdown measures were eased by the government, are the lowest since March 24. 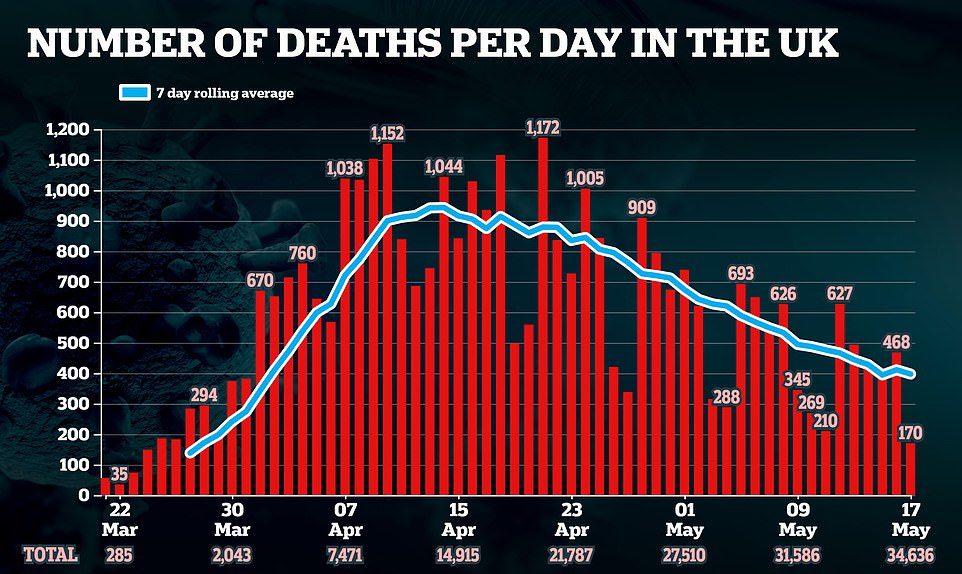 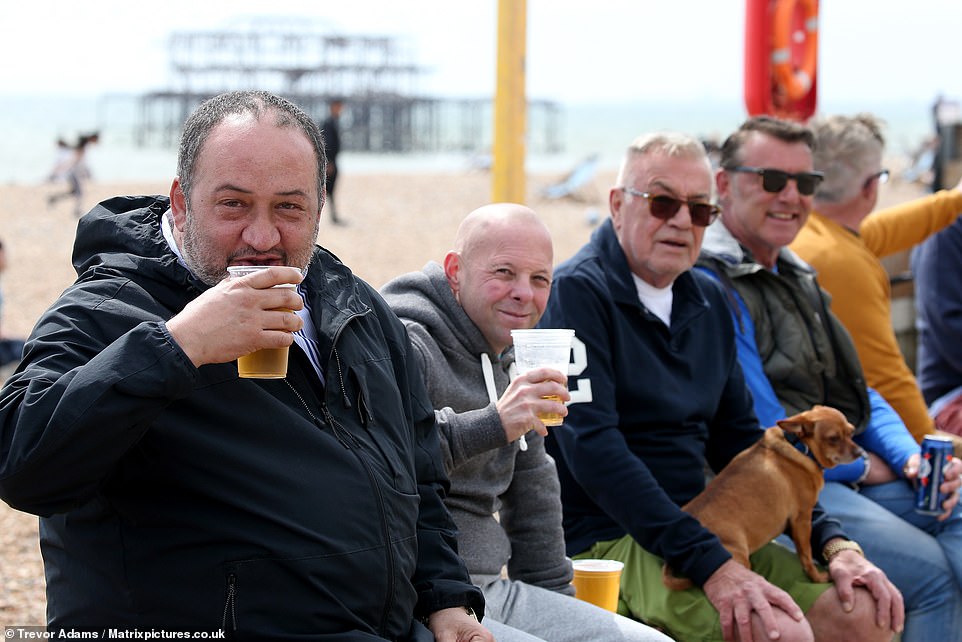 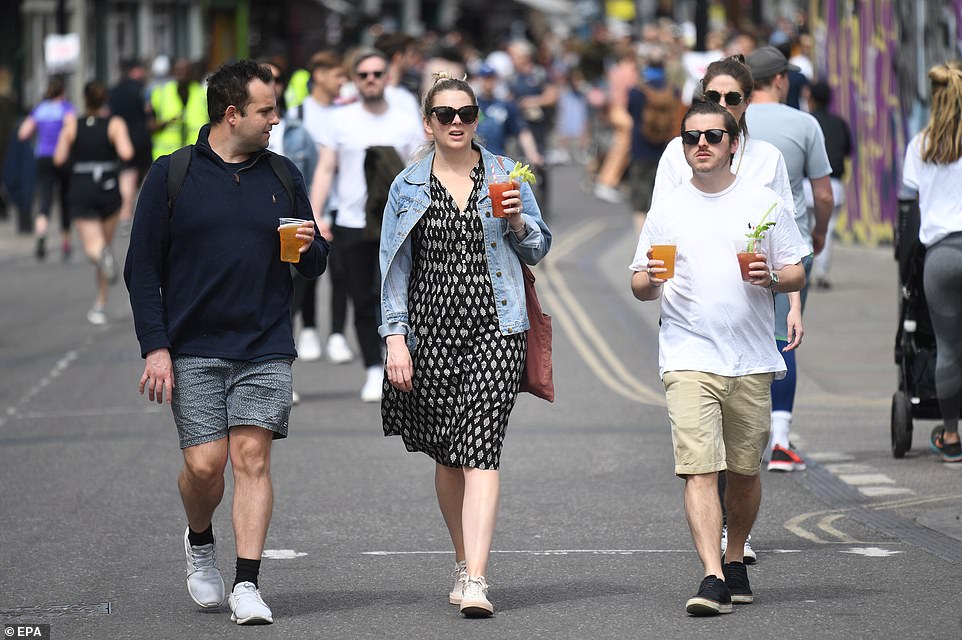 As temperatures began to rise,  people were seen carrying takeaway drinks from a pub on Broadway Market in east London today 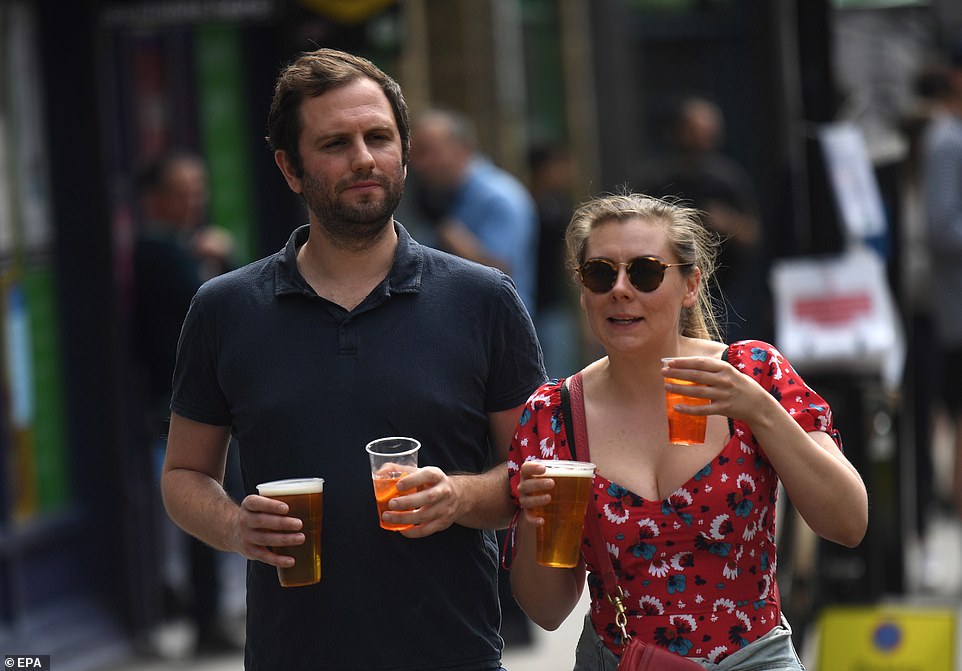 As pubs, cafes and restaurants look to open outdoor spaces, people with takeaway drinks from a pub on Broadway Market in London were spotted taking a stroll along the street 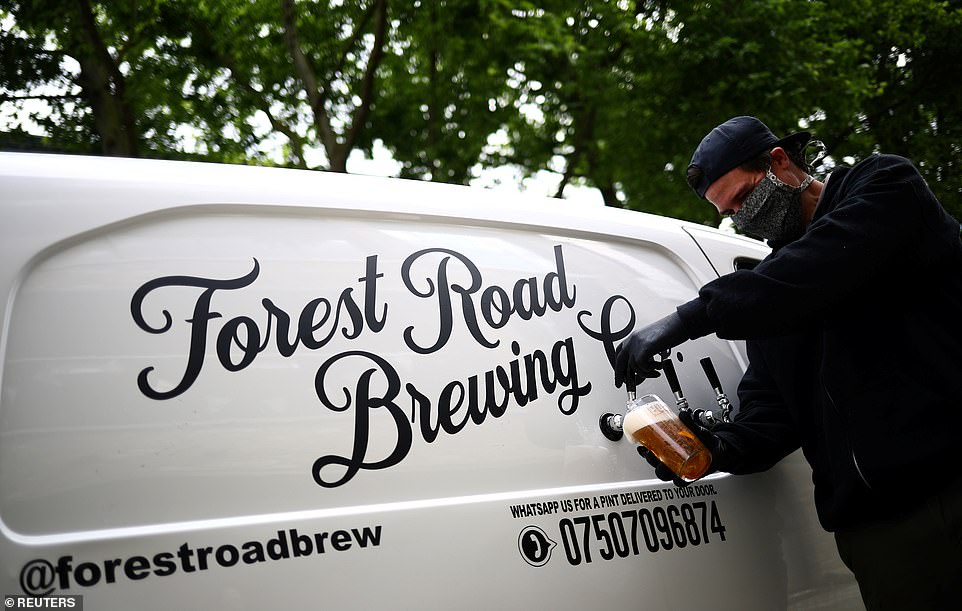 Peter Brown, the director of Forest Road Brewing Co, pours a pint of beer from his vehicle to a customer  during his delivery round in Hackney, London