Rush-hour traffic has plunged in London two days after the capital was put into a tier two coronavirus lockdown.

Congestion levels this morning were at 46 per cent during the rush hour at 8am, down 14 percentage points from 60 per cent at the same time last week and down from a 63 per cent average last year.

It comes after nine million Londoners were banned from meeting other households indoors and many continue to work from home following the Government urging people to do so if possible on September 22.

Drops in congestion compared to last week were seen in other UK cities at 8am today, although not to such a great extent – possibly because many have been experiencing restrictions for longer than London.

Cars queue at traffic lights this morning in Dagenham, East London, as congestion levels fall across the capital in rush hour 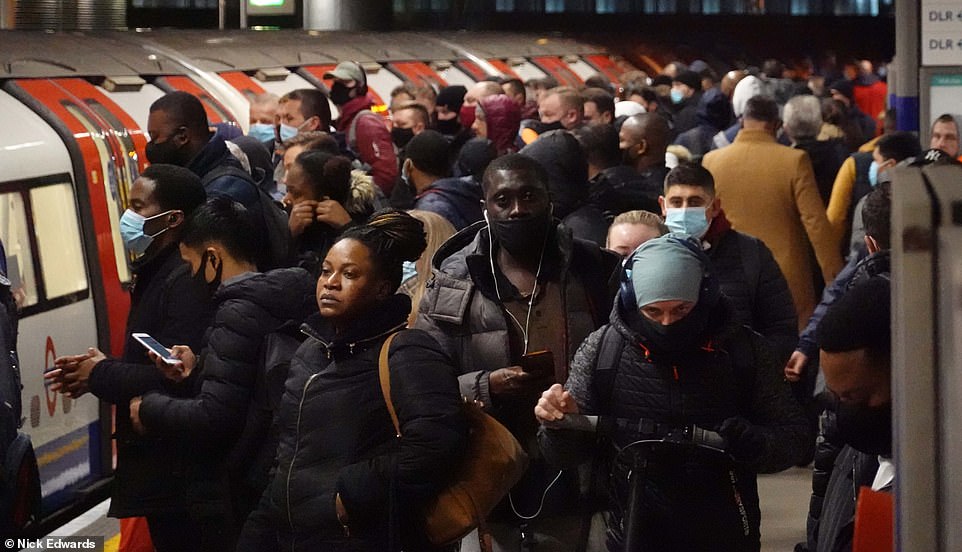 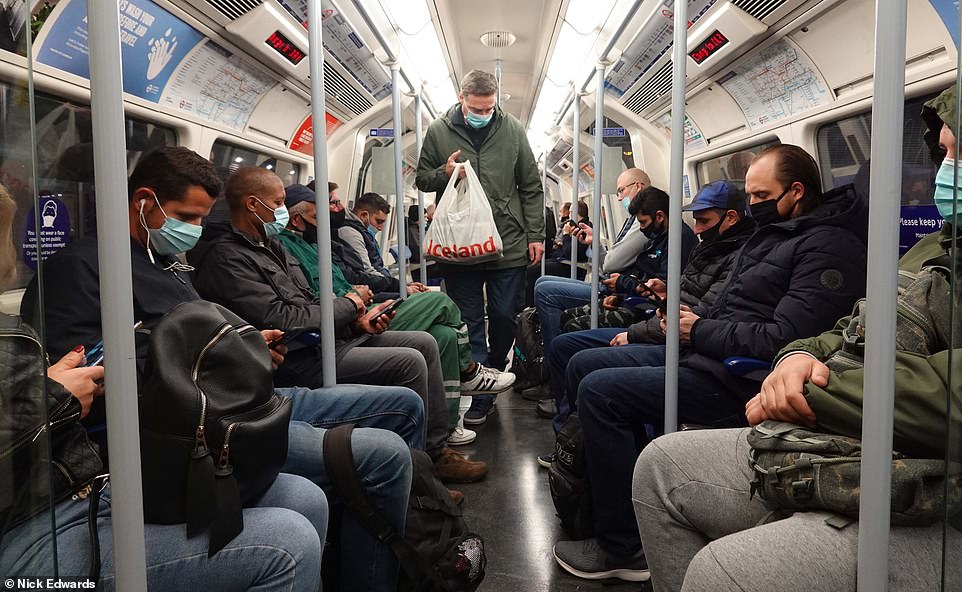 Congestion in London this morning:

Congestion at 8am today in other UK cities:

It contrasts with data emerging last Friday revealing nearly two out of every three workers are now commuting to their job in a sign that many employees were rejecting official advice to work from home.

Official estimates said 65 per cent of working people are now travelling to an office, factory, shop or other workplace for at least some of their week, the highest share since the first lockdown began to ease in May.

For the first time more than half the working population are travelling to work every day and have entirely abandoned working from home, the Office for National Statistics said.

Its surveys found that 54 per cent of employees were commuting every day in the week that ended on Sunday, October 11 – up from 48 per cent in the previous week.

The back-to-work movement is happening despite Boris Johnson’s appeal last month for people to work from home when they can.

The call, made as the Government ordered pubs and restaurants to close at 10.00 and as Rule of Six restrictions were being introduced, was a reversal of the Prime Minister’s earlier hopes that people would get back to their offices and workplaces.

The ONS linked the shift to the end of furlough subsidies at the end of this month, the re-opening of more businesses, and the return of more people to normal working following the end of the summer holidays.

Its report said: ‘Despite Government guidance to work from home wherever possible on 22 September 2020, there is no indication that the longer-term trend of travelling to work has changed.’

It added that there was ‘a corresponding decrease in the proportion of people who are not in work for reasons such as temporary closure of their business or workplace, being on annual leave, or being unable to work because of caring responsibilities, or being furloughed: 12 per cent this week, down from 17 per cent last week. 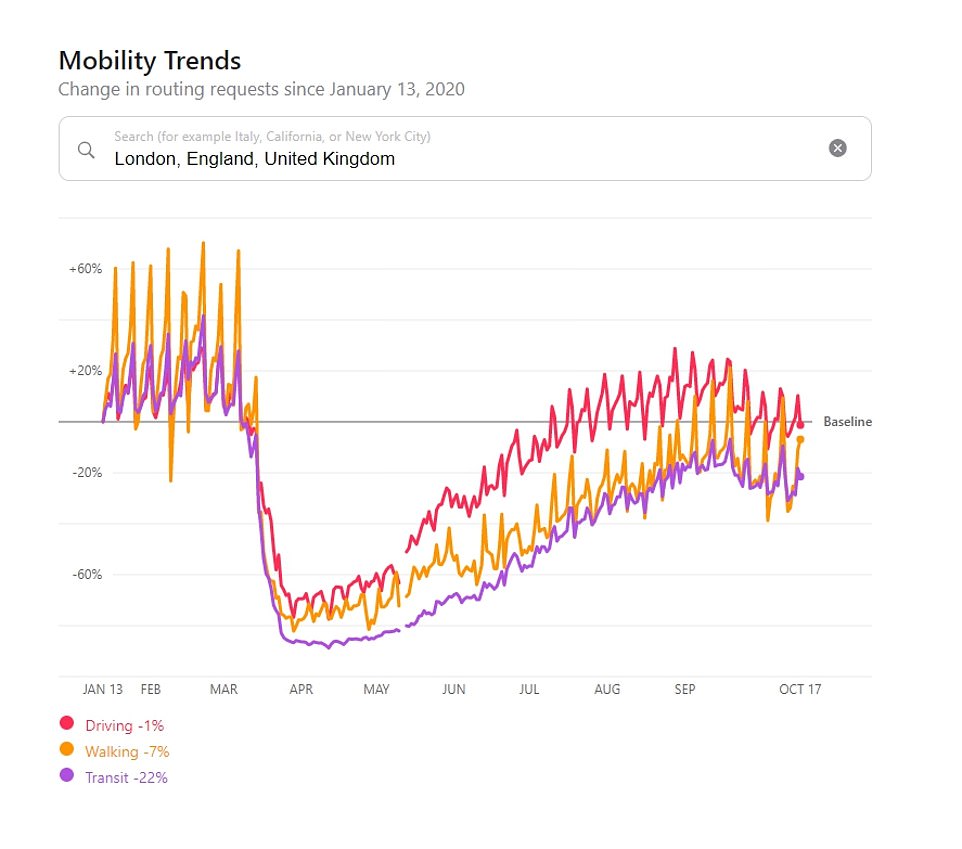 This Apple mobility data map shows how requests for driving (red), public transport (purple) and walking (orange) have changed over the past ten months, based on a baseline of mid-January, slightly falling back down again in recent weeks

This data shows the breakdown of London Underground usage by the type of station, with seven different categories above 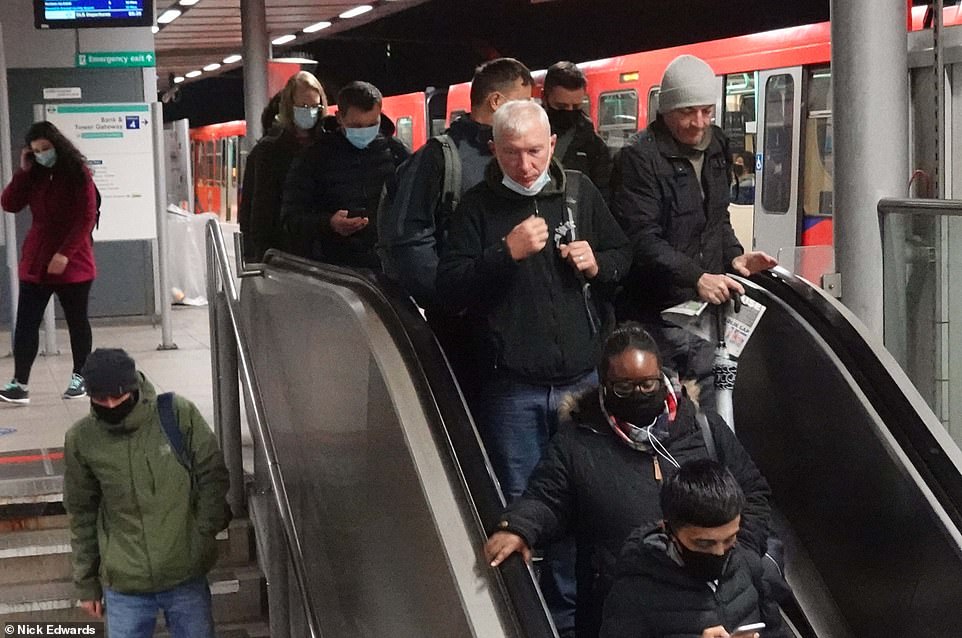 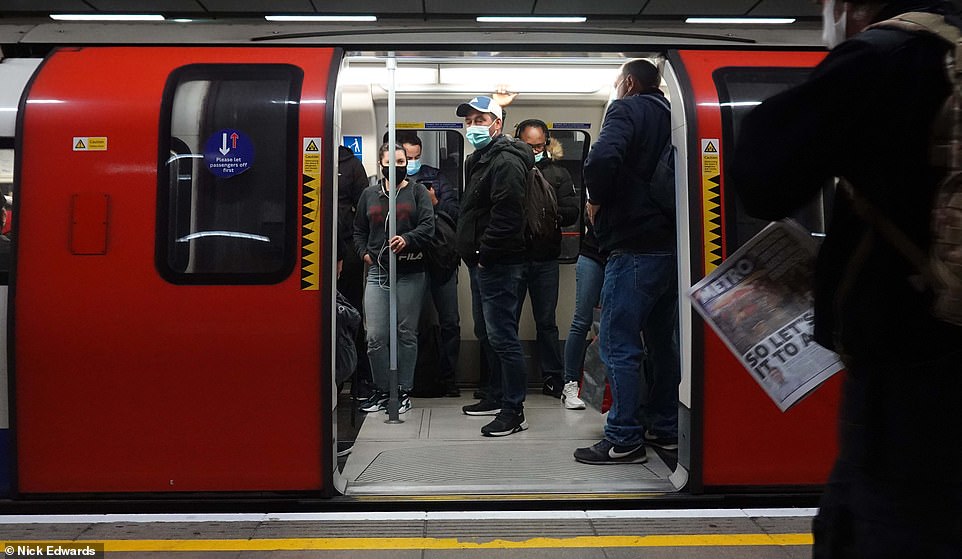 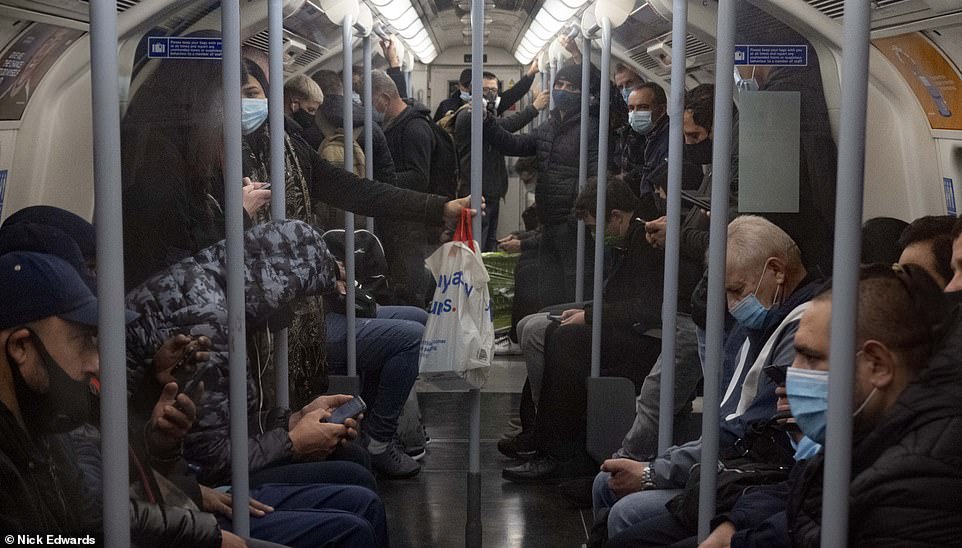 The 65 per cent figure for workers commuting for at least some of their week was up from 62 per cent in the first week of October.

Grant Shapps has hit out at ‘unused’ cycle lanes clogging up traffic – blaming some town halls for misusing special funds for ‘green’ transport.

The Transport Secretary declared he was ‘not prepared to tolerate’ badly designed road closures that led to traffic being ‘backed up’.

He also vented his fury at new cycle lanes that impose ‘sweeping changes’ to entire communities.

Research conducted by MailOnline in London, where Transport for London is leading its own £33million scheme, showed that on Park Lane, in Mayfair, only 21 cyclists used the cycle lane as 400 cars battled past.

Mr Shapps’ comments, in a letter sent to local councils last week, come despite the fact that many of the cycle lanes were built using money from an emergency £250million fund which he unveiled in May.

The surveys showed that around three in four people said they were worried about the impact on their lives of coronavirus and efforts to tackle it.

But more than two thirds – 67 per cent – of people in local lockdown areas complained about restrictions on their freedom and independence, compared to 55 per cent in places still comparatively free of restrictions.

Around one in six people – 17 per cent – said they rarely or never observed social distancing rules.

It comes after retail giant Amazon told staff to continue working from home into 2021, leading a wave of employers who are delaying a return to the office amid soaring coronavirus cases.

The company previously announced plans to allow workers worldwide to stay at home if they could do their job ‘effectively’ until early January.

But after the government announced plans to put London into Tier Two lockdown restrictions from tomorrow to clamp down on virus cases, they pushed back the expected return date for UK employees to March.

Amazon’s giant British headquarters in London’s Principal Place, which can hold up to 5,000 staff members, have been largely empty since the first lockdown in March this year.

Firms are concerned about setting definitive dates for a return to the office.

More than half of accounting firm KPMG’s 17,000-strong workforce who would usually work at a clients’ office or a company workplace had joined other staff who were already working from home.