A senior Government adviser today warned that only a second national lockdown would achieve the suppression of coronavirus as he blasted other restrictions as ‘biting around the edges’.

Sir John Bell, regius professor of medicine at the University of Oxford, advocated a national circuit-breaker as he suggested the Government had lost control of an ‘eye-watering’ number of coronavirus cases.

He claimed only a second shutdown of society and the UK economy would allow the Government to keep the pandemic in check, in an echo of Labour leader Sir Keir Starmer’s call for lockdown.

The adviser told BBC Radio 4’s Today programme: ‘I can see very little way of getting on top of this without some kind of a circuit-breaker because the numbers are actually pretty eye-watering in some bits of the country and I think it’s going to be very hard to get on top of this just biting around the edges.

‘I think there will be every effort to keep schools open. If in the end we have to take kids out for two weeks, calm it all down, and then start ideally embedded in a much more rigorous testing regime then that’s maybe what we may have to do.’

Sir John’s plea for a national clampdown, which would see tougher enforcement of social distancing rules, was then followed by Jeremy Hunt’s suggestion that he would support a circuit-breaker.

The former Health Secretary also called for an end to the public war of words over local restrictions, telling the Today programme: ‘I’ve always thought that it’s better to do things quickly and decisively than to wait until the virus has grown so I have a lot of sympathy with that.

‘But I think more important right now is we stop this public war of words between local leaders and national leaders because in a pandemic the most important thing is a consistent message because you really have to have compliance with the very, very important public health messages about social distancing.

‘I really do urge Andy Burnham and other local leaders to have these arguments, and I’m sure they’re very fierce arguments and I’m sure there’s some justification for some of their concerns, but have those arguments in private not in public because that’s so damaging to the national fight against the virus.’

It comes as London was plunged into Tier Two lockdown last night, with Boris Johnson thanking Mayor Sadiq Khan for working with the Government to place the capital into the higher alert level.

The Prime Minister also urged Greater Manchester Mayor Andy Burnham to cooperate after the Government accused the influential Labour politician of holding the country to ransom.

Mr Burnham is resisting the Government’s move to place the region into Tier Three and is instead agitating for a nationwide lockdown, leaving negotiations with Ministers deadlocked.

But Mr Johnson yesterday used a Downing Street press briefing to warn that he is prepared to elevate Greater Manchester unilaterally, with sources suggesting he could impose harsher measures as early as Monday.

Lancashire leaders yesterday struck a deal with Government and joined Liverpool in the most severe Tier 3 bracket, meaning all pubs and restaurants must close unless they can serve food.

As more than 28 million people in England began living under the top two tiers:

Sir John Bell, regius professor of medicine at the University of Oxford, advocated a national circuit-breaker as he suggested the Government had lost control of an ‘eye-watering’ number of coronavirus cases 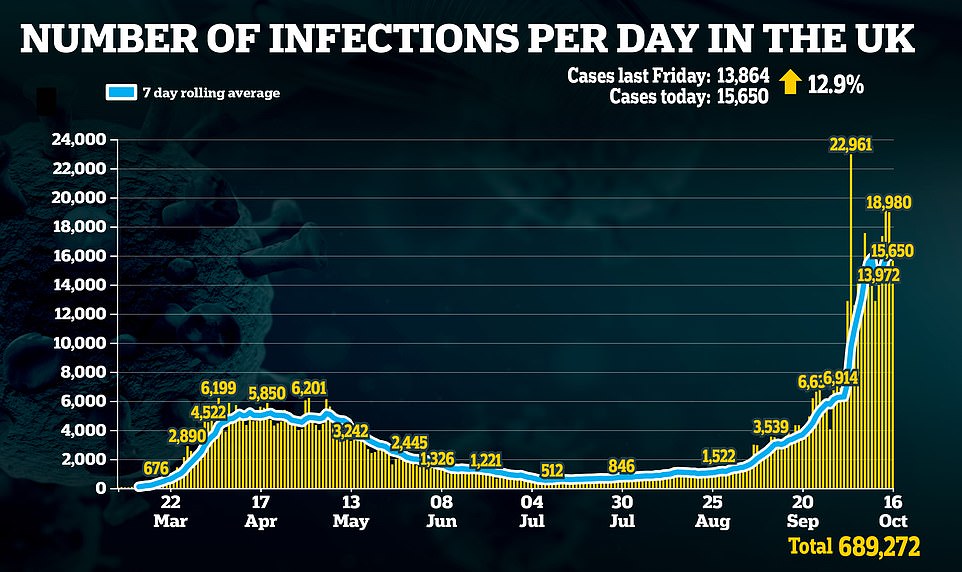 Britain also recorded 15,650 new cases of coronavirus and 136 deaths as 28 million people were plunged into lockdown

Last night Britain’s biggest teachers’ union backed Sir Keir Starmer’s calls for a circuit-breaker lockdown to ‘get in control of the test, track and trace system’ and regain control of the pandemic.

The Labour leader said a complete shutdown lasting two to three weeks could be timed to take place over half-term to minimise disruption, but warned that ‘sacrifices’ would have to be made.

The National Education Union (NEU) said the move, which would see secondary schools and colleges in England closed for two weeks at half-term, was urgently needed ‘to allow the system to work better’.

The growing calls come as a raft of statistics published this afternoon showed cases are still surging in England by as many as 28,000 new infections per day, according to ONS estimates for the first week of October.

The NEU is now calling for secondary schools and colleges to be shut for two weeks, rather than one, over the October half-term to halt the spread of coronavirus.

Kevin Courtney, joint general secretary of the NEU, said: ‘Heads, teachers and school staff understand the educational impact of this, but we also understand that in exponential epidemics early action is essential. Taking action now can avoid more disruption later.’

Yesterday Mr Johnson defended his three tier system but refused to rule out a circuit breaker. He said: ‘Some have argued that we should introduce a national lockdown instead of targeted local action, and I disagree.

‘Closing businesses in Cornwall, where transmission is low, will not cut transmission in Manchester. So while I can’t rule anything out, if at all possible I want to avoid another national lockdown.’

On Friday, figures from the ONS showed that the highest rates of infection in England continue to be among young adults and secondary school pupils.

Mr Courtney continued: ‘This should be no surprise to either the Prime Minister or the Department for Education – scientists have consistency told them that secondary students transmit the virus as much as adults, and we have warned them that because we have amongst the biggest class sizes in Europe we have overcrowded classrooms and corridors without effective social distancing.

‘Our classrooms often have poor ventilation, leading to airborne transmissions, and in many areas we have also have overcrowded school transport where children are mixing across year-group bubbles.

‘These children live in families and are part of communities, so even if they have few or no symptoms themselves they are still part of spreading the virus to others, including to teachers and other school staff.’

He added: ‘Such a circuit-breaker could allow the Government to get in control of the test, track and trace system, and get cases lower to allow the system to work better.’