Coronavirus UK: Students suspended and fined £10k EACH after party

Four university students have been fined £40,000 after throwing a house party, lying about it and moaning at officers for ‘spoiling their fun’.

The Nottingham Trent third-years were each handed £10,000 penalties – more than a year’s tuition – after 30 revellers were found hiding in the kitchen, bedrooms and basement last night.

All have been suspended by the university and face further disciplinary action including expulsion pending the outcome of an investigation.

Nottinghamshire Police say council community protection officers were patrolling when they came across a house party on Kimbolton Avenue, Lenton.

The four students insisted everyone had left, but the officers barged in to find dozens of party-goers inside. 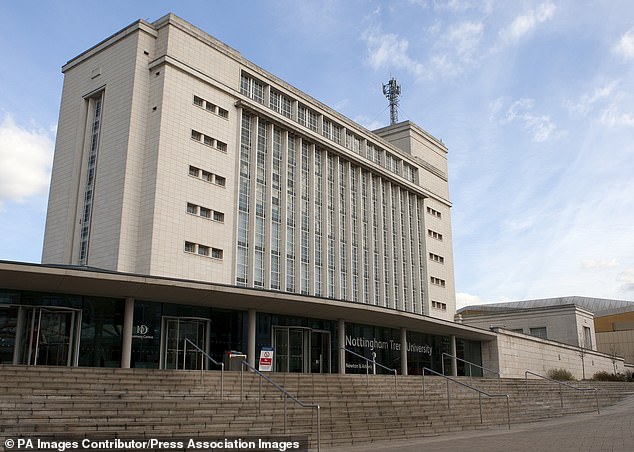 Police claim the students then protested that they ought to be having the ‘time of their lives’ and blamed the officers for ‘spoiling their fun’.

Assistant Chief Constable Kate Meynell, of Nottinghamshire Police, today scolded the students for putting lives at risk, and sought to justify handing down the maximum fine for breaching Covid rules.

She said: ‘This needs to stop. The claims that police presented as a barrier to the students’ fun are astounding.

‘How many fines do we have to give before the message is understood? We do not take pleasure in handing out fines and would much rather be in a situation where students could enjoy themselves but the reality is that if people do not follow the Covid-19 restrictions, more people will die.

‘The majority of students are following the rules but there obviously is a significant number of them who feel as though they can show blatant disregard for the safety of those around them. 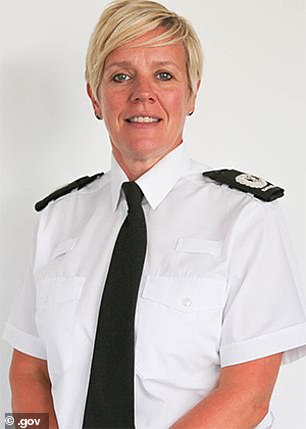 ‘We have demonstrated that we will take action where necessary and I’d like to thank the Community Protection Officers for spotting the party and engaging with the occupants at the house in Lenton last night.

‘The students were given the opportunity for the situation to end with a warning but instead decided it was appropriate to lie to officers.

‘This behaviour will not be tolerated and I urge those who are considering to host parties to think again.

‘We will be working closely with Nottingham Trent University and Nottingham City Council to make sure that all breaches of Covid legislation are attended and dealt with appropriately.’

A spokesperson for Nottingham Trent University said: ‘We have been notified by Nottinghamshire Police this morning that they have imposed £10K fines on NTU students.

‘On receipt of that notification we immediately launched an investigation, and each student has been suspended pending the outcome of our investigation.

‘Any student who is found to have breached our disciplinary regulations can face a range of sanctions, up to and including expulsion.

In separate incident, another Nottingham Trent University student was given a £200 fine for ignoring warnings from officers at party in Blenheim Court student Halls in St Ann’s. 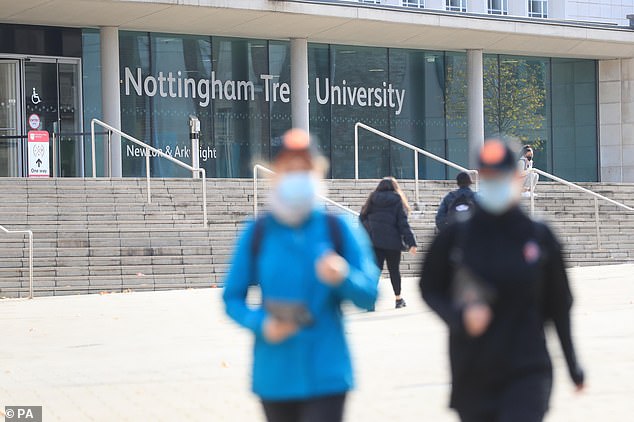 A Nottingham Trent University spokesperson said they have not ruled out explusion, pending an investigation (campus pictured)

Nottingham is currently under Tier 2 coronavirus restrictions which bans different households from mixing indoors and still includes the nation Rule of Six limits.

Government figures today revealed the local authority is grappling with the second highest infection rate in England, with 639.5 cases per 100,000 people.

Nottingham City Council and Nottinghamshire County Council said they have not yet held talks with the Government over potential Tier 3 restrictions.

It is understood internal meetings within the county council have taken place but there have been no meetings with Government ministers.

It is also understood that there are no meetings in the diary for Nottingham City Council leader David Mellen with Government ministers.

On Friday, a spokesman for the city council said the ‘situation is still the same’ after Mr Mellen previously said he was ‘expecting to meet with Government this week’.

Councillor Mellen responded to the lockdown-busting house party and said: ‘The extremely high levels of Covid in Nottingham are widely known and understood, and we all have a responsibility to protect ourselves, our families, neighbours, friends and the vulnerable.

‘Overall, the people of Nottingham have risen to that brilliantly and I thank them again for the efforts they’ve made to try to slow the spread of this deadly virus.

‘However, where there are isolated instances of people ignoring the rules – and putting themselves and others at risk – it’s absolutely right that the police take swift and decisive action.

‘These large fines send out a strong message that behaviour like this won’t be tolerated in Nottingham.

‘I’d also like to thank our Community Protection officers for the vital work they are doing in partnership with police colleagues – this is a team effort.’