Coronavirus UK: Terror chief is drafted in assess and alert public on risk

One of Britain’s top counter-terror officials will take control of the country’s new biosecurity centre which will monitor the coronavirus threat level.

Tom Hurd, 54, director-general at the Office for Security and Counter-Terrorism, will set up the new Joint Biosecurity Centre which will run the Covid-19 alert system.

The UK is currently at level four of the five-tier system, just below the ‘most critical’ threat – the kind that would have seen the NHS swamped by virus cases.

Tom Hurd, 54, is currently director-general at the Office for Security and Counter-Terrorism

Mr Hurd, who is the son of former Conservative foreign secretary Douglas Hurd, 90, is also in the running to be the next chief of MI6, reported the Financial Times.

He has been in charge of counter-terrorism strategy since 2016 and is a potential candidate to replace Alex Younger when he steps down from MI6 later this year.

One Whitehall official told the FT of Mr Hurd: ‘He’s a very, very senior civil servant and it’s significant that someone of his calibre has been brought in.’

His current role within the Home Office means he is responsible for the Government’s strategy, policy and legislative response to the threats of terrorism.

Another Government official added: ‘Given his expertise he is the best person in government to set this work up, but he will be returning to the Home Office.’ 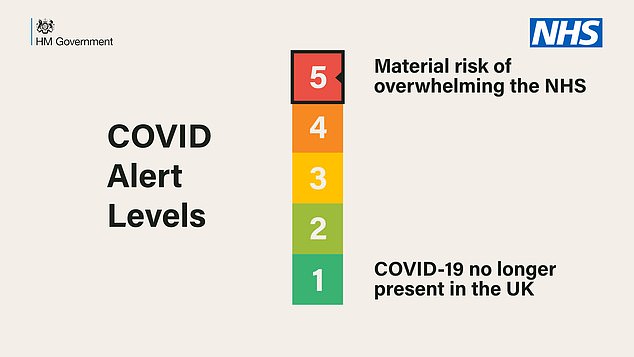 The UK is currently at level four of the five-tier system, just below the ‘most critical’ threat

Former investment banker Mr Hurd is an expert on the Middle East and is also a former member of the UK team attached to the United Nations security team.

In addition he was a former contemporary of Prime Minister Boris Johnson at Eton College and Oxford University, where he studied Middle Eastern affairs.

Before joining the Foreign Office in 1992 he worked for Credit Suisse First Boston.

However his life was hit by tragedy in May 2011 when his wife Catherine, 46, plunged four storeys to her death from the roof of her home in New York City.

Police said at the time that she was found ‘unresponsive with severe trauma’ on the Upper East Side of Manhattan, but her death was not treated as suspicious. 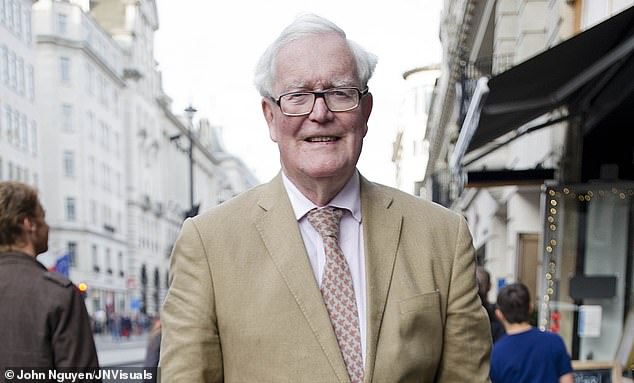 On Sunday, Mr Johnson used his landmark address to the nation to suggest the country was now edging towards level three of the coronavirus threat level.

The further down the Covid alert level ladder the country goes, the more lockdown measures could be eased.

The Prime Minister said: ‘We are establishing a new Covid alert system run by a new Joint Biosecurity Centre. And that Covid alert level will be determined primarily by R and the number of coronavirus cases.

‘Level one means the disease is no longer present in the UK and level five is the most critical – the kind of situation we could have had if the NHS had been overwhelmed. ‘Over the period of the lockdown, we have been in level four, and it is thanks to your sacrifice we are now in a position to begin to move in steps to level three.’

Speaking about what data the new hub may use, Paul Hunter, a professor in medicine at the University of East Anglia, told MailOnline today: ‘It all depends on who they employ and what approaches they use to define the risk and what its actual remit turns out to be.

‘I am not sure someone whose background is in terrorism would have sufficient subject specific knowledge to fully understand many of the scientific and medical issues. But that may not be necessary for the head of the hub, if he is able to work with subject specific experts.

‘To me the main questions are around how independent is the hub going to be of both government and the existing scientific advisory system.

‘Is the unit to be staffed with civil servants or include scientists and epidemiologists from outside of government? 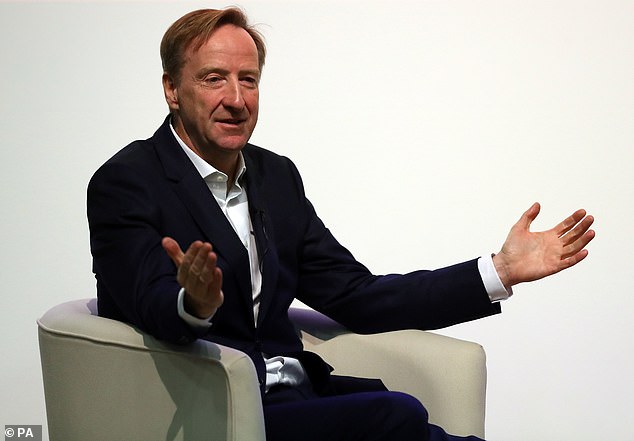 ‘Are the main people contributing to this going to be the same people currently advising Sage (the Scientific Advisory Group for Emergencies)?

‘In which case why do we need the hub? Is the hub going to be apart from that group and able to make its decisions fully independently? Will the hub be focusing on watching a very restricted range of indicators or taking a broad view of the available evidence?

‘Is its job solely going to be setting the alert level or will it be able to comment more widely on the epidemic and its management? What would happen if its opinions and assessments differed from those of Sage?

‘There are pros and cons around many of these key decisions. For example, if independent of current structures it could serve as really vital check on the existing procedures – but significant conflict of opinion could lead to more unease.

‘Until we know more, it is impossible to say whether or not the hub will be a valuable contribution to the control of this crisis.’