Film and television production will be allowed to restart in Britain as long as crew and actors keep two metres apart from each other, it emerged today.

The news is a boost to the industry seven weeks after all physical film production was halted when the UK’s coronavirus lockdown was imposed on March 23.

Production has been derailed by the pandemic on various hit UK dramas including the likes of Peaky Blinders, Sex Education, Call The Midwife and Line Of Duty.

ITV has said Coronation Street only has enough episodes to last until the ‘early summer’, while the BBC has not said when EastEnders will run out of new shows.

It has also been claimed that older soap stars could be banned from set with storylines focusing on younger cast members.

Beloved Coronation Street stars Bill Roache, 88, Barbara Knox, 86, David Neilson, 71, and Sue Nicholls, 76, could be told not to return as it’s ‘too risky’.

He also said that Emmerdale will remain on screens until the end of May, while Corrie will stay on air until the end of June. Both soaps have been forced to scale back their weekly episodes from seven to three.

EastEnders has also cut back on their broadcasting, scaling back to just two episodes a week in a bid to ‘ration’ their filmed content. 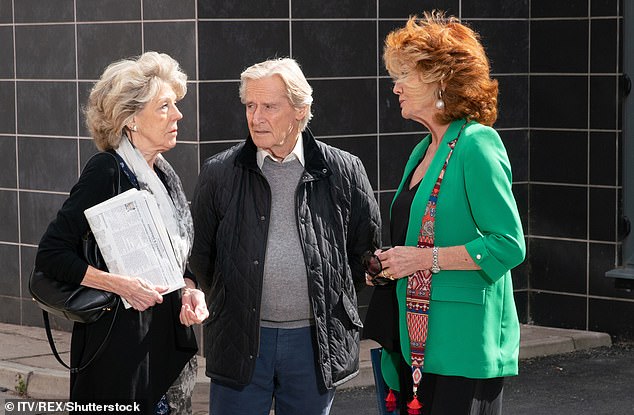 It has also been claimed that older soap stars could be banned from set with storylines focusing on younger cast members (Coronation Street stars Sue Nicholls, Bill Roache and Rula Lenska on set in October 2018)

Although the BBC soap is reportedly having cast return to work in June with bosses trying to figure out how filming will take place while still abiding by the restrictions.

Which characters are at risk?

A source told The Sun: ‘Filming will have to resume at some point and bosses say June is the benchmark. With strict social distancing and extra precautions on set they think EastEnders could make the transition.

‘But they appreciate the health and safety of the cast and crew is paramount and should the lockdown restrictions be tightened, filming will, of course, not take place.’

The insider added that the soap’s bosses have said that if filming can ‘resume safely’, then it will ‘go ahead’.

Meanwhile Love Island has been cancelled this summer but ITV bosses are said to be considering reviving the show for the autumn and filming in the Canary Islands.

More details about the practicalities will be revealed after a new industry-wide consultation on new filming protocols and insurance closes this Friday.

But officials within the Department of Digital, Culture, Media and Sport said today they wanted to ‘give confidence’ to the industry that it can safely return to work. 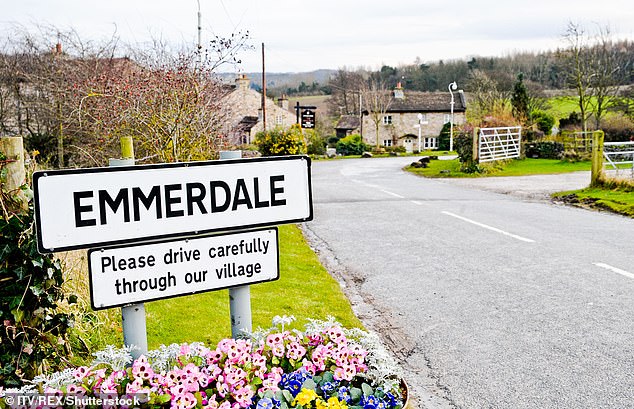 It Takes Two host Zoe Ball is convinced the competition series will air this year.

Despite plans still being up in the air, the presenter, 49, has insisted producers will do whatever it takes to get the BBC favourite to return to screens in the coming months.

‘I spoke to some people and they will do anything and everything to make sure that show goes on’, the TV and radio star shared.

She told The Sun: ‘We are in tough times with the Coronavirus but where there is a will, there is away. I feel like they will come through.

‘Whatever happens with the situation I know that they are going to put that show on somehow. It might not have a studio audience, it might be slightly different.’

Sources claimed Strictly may go ahead this autumn without its usual studio audience cheering on the performers.

Comparing the series to RuPaul’s Drag Race during a virtual production meeting, BBC’s director of content Charlotte Moore said: ‘People think if it is a shiny floor it needs an audience and I don’t think that’s necessarily true.’

The Strictly set-up has included a live audience since the show first aired back in 2004, when it was fronted by Tess Daly and Bruce Forsyth, who retired from the show and was replaced by Claudia Winkleman from 2014. 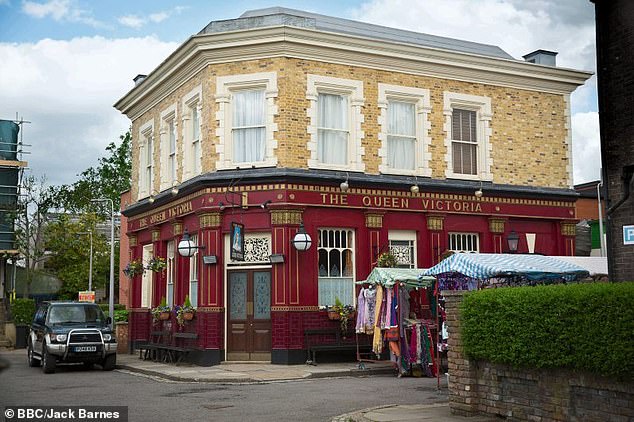 The BBC has stopped the filming of EastEnders but it is unclear when it will run out of episodes, reports claim cast members will return to set in June while following regulations

Bosses are reportedly offering doubled fees to celebrities as they continue to assess show contingency plans amid the global crisis.

Sources claimed TV executives are keen for the series ‘to remain the jewel in the BBC’s crown’ and have already put forward contract proposals in a bid to attract a ‘stellar line-up’.

Meanwhile Dancing On Ice is reportedly working on a special programme to ‘fill the gap’ should they be forced to cancel this year’s series amid the ongoing pandemic.

As reported in The Sun, both Holly Willoughby and Phillip Schofield are on board with the programme that will feature ‘lockdown episodes’ filmed by some favourite celebs over the years.

A source told the publication: ‘Obviously no-one knows when lockdown measures and social distancing will be fully eased – but DOI has become a fixture in the winter TV schedules. 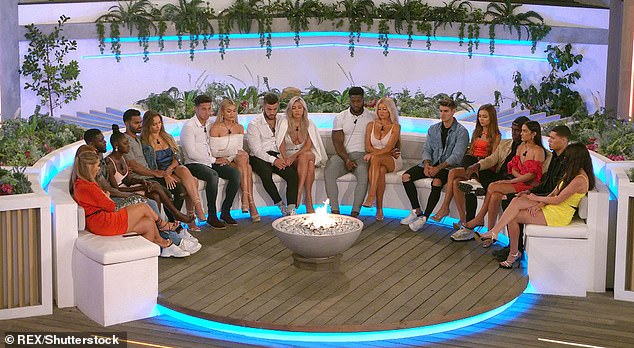 ‘It’s be a hammer blow for ITV to lose it. As such, they’ve filmed some lockdown episodes – working title: Dancing On Ice Specials – to fill that gap, should the live programmes become untenable.’

The source also revealed judges Jayne Torvill and Christopher Dean will be part of the series looking back at their time on the show with never seen before footage.

They continued: ‘The hope is that these can be screened on ITV2 as a spin-off if the main series is able to go ahead – but execs don’t want to take any chances.’

Meanwhile I’m A Celebrity… Get Me Out Of Here! is reportedly set to still go ahead later this year, despite the coronavirus pandemic.

Sources tell The Sun that show bosses are ‘holding virtual talks’ to plan for the show’s return, as they anticipate a huge response from viewers following the crisis. 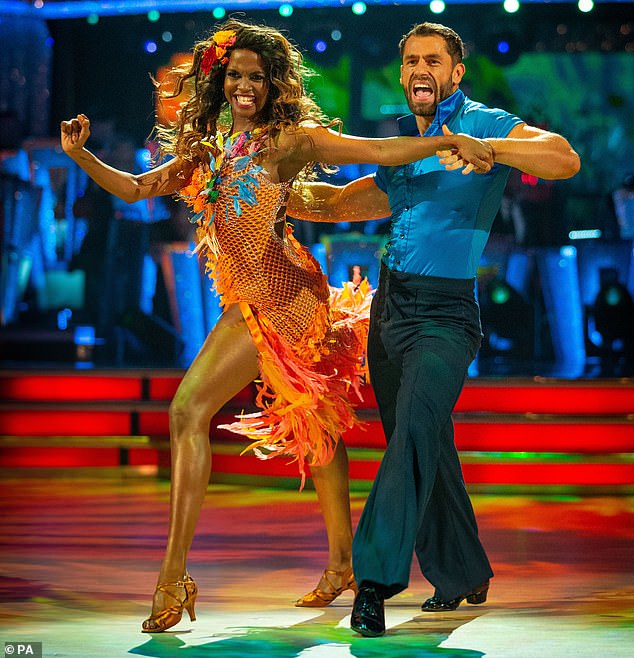 A TV source told the paper: ‘ITV are certain lockdown will be well over by the time I’m A Celeb normally starts which is in November.

‘Every year it’s a ratings smash and this year will more than likely be even bigger as the public will be desperate for some fresh and uplifting TV.’

Insiders added that ITV has already started ‘hiring and advertising for crew’ in Australia, where I’m A Celebrity is filmed each year, and meetings are being held virtually to discuss potential celebrity campmates.

It comes after the Government told all workers who cannot work from home that they should travel to work if their workplace is open from tomorrow. 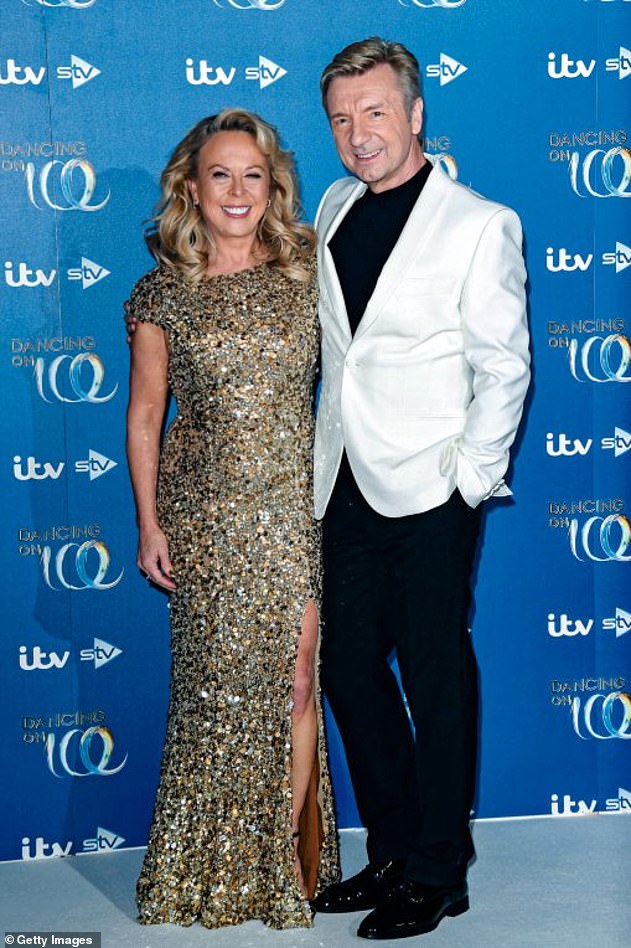 New Covid-19 guidelines for the workplace state that companies will now have to ensure all employees maintain social distancing and regularly wash their hands.

The British Film Commission has been developing industry-wide safety protocols to keep sets safe such as pre-shoot safety training and testing.

The ‘Film and TV Production Codes of Practice’ plans have also proposed quarantining foreign actors, and will be finalised after the consultation closes.

A DCMS spokesman told Screen: ‘The Government is working closely with the screen sector to understand how different types of productions can comply with social distancing guidelines, and give confidence to people in the TV and film industries that there are safe ways in which they can return to work.’

Last week, Coronation Street producer Iain MacLeod revealed that future episodes of the soap will feature the coronavirus for the first time. 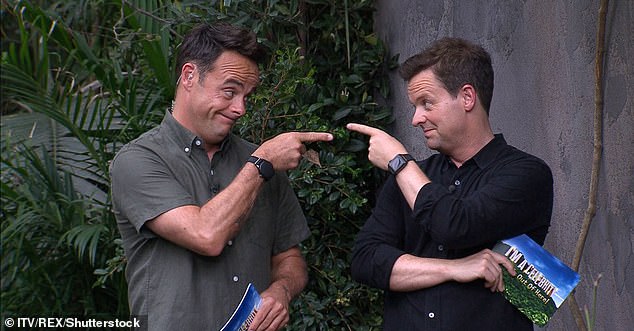 I’m A Celebrity… Get Me Out Of Here! is believed to be set to still go ahead later this year, despite the coronavirus pandemic (hosts Ant and Dec pictured)

He said that the pandemic must be worked into scripts in order to reflect modern Britain which the ITV soap prides itself on doing.

Mr MacLeod said viewers will see evidence of it in the ways characters behave, the washing of hands and the ways businesses are run.

However ‘it won’t dominate every single story of every single scene’. Episodes referring to the virus have not been filmed yet and scripts are being written.

The filming of both Coronation Street and Emmerdale has been stopped and transmission reduced to make the episodes already been recorded last longer.

MailOnline has contacted the BBC and ITV to ask when it expects filming to resume on EastEnders and Coronation Street respectively.