A hospital in Massachusetts has found another job for Spot, Boston Dynamics’ dog-like robot: Doctor.

The yellow-and-black quadruped has been proven able to take patients’ vital signs from a distance of over six feet.

That could allow healthcare workers to keep a safe distance from patients who may be infected with the coronavirus or other contagion.

So far, Spot has only been tested on healthy patients at Harvard Medical School’s Brigham and Women’s Hospital – the next step would be to try it out in an emergency room setting.

Researchers at MIT say they’ve developed cameras that allow Spot, Boston Dynamics’ dog-like robot, to take vital signs from more than six feet away. The VitalCam could allow health care workers to maintain social distancing while examining patients who may have COVID-19

The Boston hospital initially used Spot simply as a walking iPad: A tablet mounted on its ‘face’ allowed doctors to speak with patients approaching the hospital and triage those who needed immediate care.

The robot is operated from a distance using a handheld device, according to MIT News.

But in a new report, researchers at MIT say they’ve proven Spot can measure pulse rate, temperature and other diagnostics from more than six-and-a-half-feet away.

To achieve this, they developed VitalCam, four different cameras mounted on Spot. 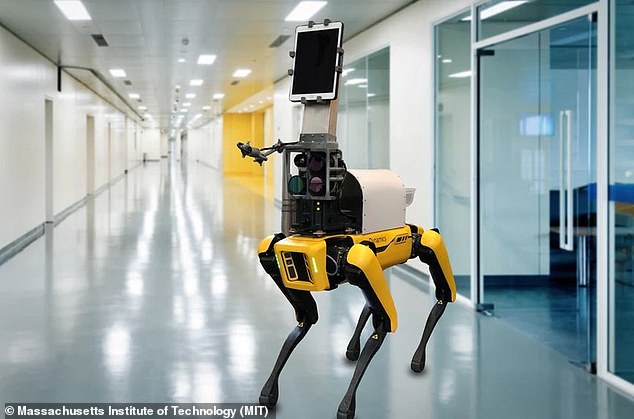 An infrared camera measures temperature and breathing rate, even through a mask, while three other cameras filter different wavelengths of light to gauge pulse rate and blood oxygen saturation.

Spot’s abilities have only been tested on healthy subjects, but the team says its ready for real-world application.

If it meets with FDA approval, the VitalCam could save time, resources and possibly even lives.

‘In robotics, one of our goals is to use automation and robotic technology to remove people from dangerous jobs,’ Henwei Huang, an MIT graduate student working on the project, said in a statement.

‘We thought it should be possible for us to use a robot to remove the health care worker from the risk of directly exposing themselves to the patient.’ 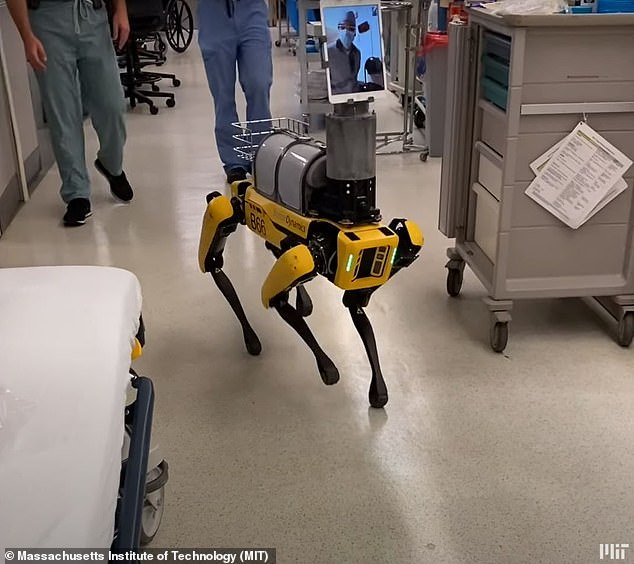 An operator uses a handheld device to operate Spot through a hospital corridor. ‘We thought it should be possible for us to use a robot to remove the health care worker from the risk of directly exposing themselves to the patient.’ said MIT researcher Henwei Huang 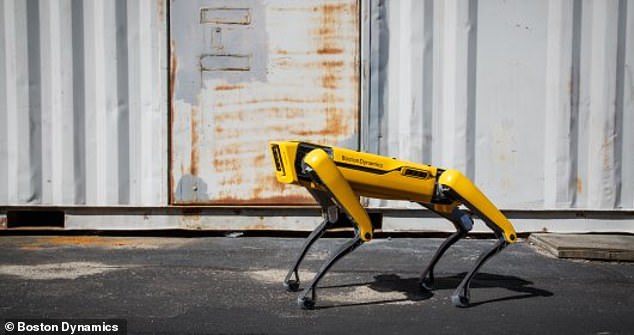 Spot’s testing capabilities have only been tried on healthy subjects. The next step would be to test it out in an emergency room setting with patients who may have COVID-19

Eventually Spot could be used to let doctors continue to monitor patients without going into their rooms.

Funded by the MIT Department of Mechanical Engineering, the study was posted on the preprint server techRxiv, but has not been published yet in a peer-reviewed medical or scientific journal.

‘We are thrilled to have forged this industry-academia partnership in which scientists with engineering and robotics expertise worked with clinical teams at the hospital to bring sophisticated technologies to the bedside,’ said senior author Giovanni Traverso, a professor of mechanical engineering at MIT and a gastroenterologist at Brigham and Women’s Hospital. 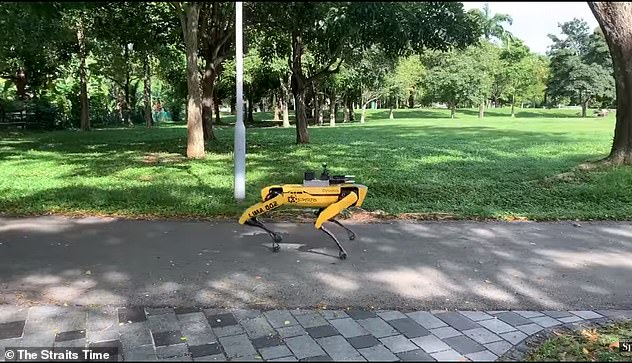 According to the National Parks Board, Spot patrols a four-mile swath of Bishan-Ang Mo Kio Park during off-peak hours, playing a recorded message reminding listeners to ‘observe safe distancing measures.’

An attached camera helps estimate the number of people in the park, though officials say it won’t record individuals or track personal information.

After making a limited number of Spots available last fall, Boston Dynamics rolled out the quadruped robot for sale commercially in June, with a price tag of $74,500.