‘Pretty sure the Nazis did something similar with yellow stars’: Backlash agianst former Facebook exec who said everyone vaccinated should wear a certain color mask

An ex-Facebook executive has come under fire for suggesting that everyone who gets a coronavirus vaccine should wear a distinctive face mask.

Chamath Palihapitiya tweeted his idea on Friday, before Americans started receiving the jabs, saying the masks would ‘signal to others that the [wearers] are vaccinated’.

But his tweet quickly came under fire, drawing comparisons with Nazi Germany’s use of golden Star of David symbols to single our Jews for persecution.

A former Facebook executive has come under fire for suggesting that everyone who has had the coronavirus vaccine should wear a certain color mask when they are out. Chamath Palihapitiya is pictured

Chamath Palihapitiya said in a tweet on Friday that everyone who gets the jab should ‘all wear a mask of a special design or color’.

‘How about we just put a gold star on ones that aren’t?’, one user tweeted in reply to the post.

‘Pretty sure the Nazis did something similar with yellow stars,’ another retorted.

Mr Palihapitiya, a venture capital investor who was one of Facebook’s earliest senior executives, spoke out on Friday – ahead of the start of the US vaccination campaign, which got underway today.

An intensive care nurse in New York the first to receive a COVID-19 shot this morning as the death toll from the virus neared 300,000.

The nurse, Sandra Lindsay, received the Pfizer shot at the Long Island Jewish Medical Center in Queens just before 9.30am during a livestream with New York Gov Andrew Cuomo.

However the idea sparked a backlash with many on social media who compared it to Nazi Germany’s use of the Star of David. 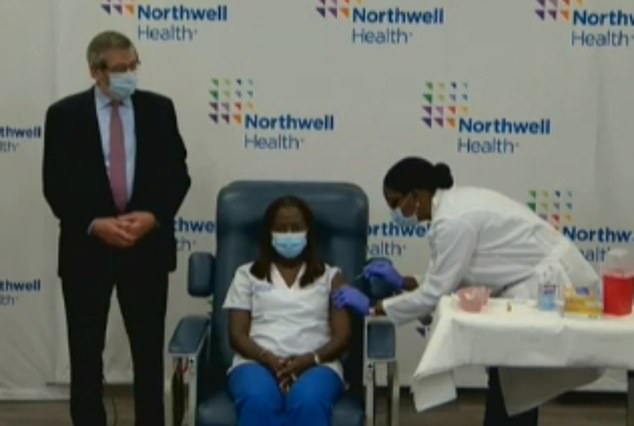 ‘It didn’t feel any different from taking any other vaccine,’ Lindsay said. ‘I feel hopeful today, relieved. I feel like healing is coming. I hope this marks the beginning of the end of a very painful time in our history. I want to instill public confidence that the vaccine is safe.’

The first of the vaccinations were administered on a day where the COVID-19 death toll approached the harrowing 300,000 milestone and cases and hospitalizations posted new record highs.

The number of new deaths on Sunday were at 1,482, bringing the seven-day average to a record high of 2,427. The US is now seeing 300 more fatalities every 24 hours than it was during the previous peak in April.