Harvard will not require next year’s applicants to submit SAT or ACT scores due to the coronavirus pandemic’s impact on access to testing.

The prestigious university in Boston announced the updated admissions policy on Monday, explaining that the pandemic ‘has created insurmountable challenges in scheduling tests for all students, particularly those from modest economic backgrounds’.

A post on the Harvard website noted that the change is temporary, so the requirement could be reinstated if and when the health crisis passes.

‘In the face of unprecedented uncertainty and anxiety surrounding the coronavirus and the economy, we want to be helpful in any way we can,’ the school said.

Six other Ivy League schools had already removed their standardized testing requirements due to the pandemic, while Princeton has yet to do so.

Standardized tests are just one factor in Harvard’s ‘whole-person admissions process’, according to the school, which had an acceptance rate of just 4.9 percent last year.

‘Accomplishments in and out of the classroom during the high school years – including community involvement, employment, and help given to students’ families are considered as part of our process,’ the policy states.

‘However, students who find themselves limited in the activities they can pursue due to the current coronavirus outbreak will not be disadvantaged as a result, nor will students who are only able to present pass/fail grades or other similar marks on their transcripts this spring.’

In other words, students applying for a spot in Harvard’s class of 2025 will be evaluated based on what is presented in their application, not what is missing.

The school said applicants are ‘encouraged to send whatever materials they believe would convey their accomplishments in secondary school and their promise for the future’.

While Princeton is still requiring scores, the university posted a letter to applicants saying it did not expects students to take the tests more than once and that scores will only be part of the evaluation process.

The College Board, which administers the SAT, initially said that it would offer the tests online for students to take home but later shelved that plan.

May and June test dates for the SAT have been canceled. 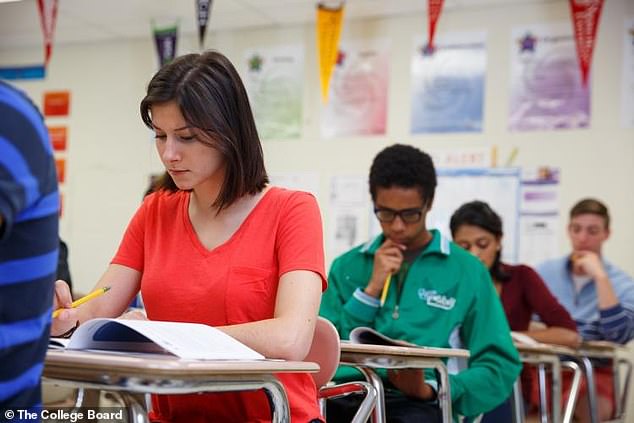 The College Board, which administers the SAT, initially said that it would offer the tests online for students to take home but later shelved that plan (file photo)

Harvard said it will not be changing application deadlines at this time, but it expects fewer students will apply in the early action round, which closes on November 1.

The university plans to be ‘open’ for the fall semester, but some or all instruction will continue to take place online.

Provost Alan Garber said it would be up to each individual school to determine how to teach undergraduate and graduate students.

Harvard Law School and Harvard Kennedy School have already said their fall term will be online only.

Officials also emphasized that Harvard’s ‘revolutionary financial aid program will not be compromised in any way’ by the new admissions policy or the pandemic.

‘The majority of Harvard students receive need-based financial aid – and loans are not required,’ the policy states.

‘Our office stands ready to help, and students can use our net price calculator to get an estimate of the aid their family would receive.’

Harvard faced fierce criticism in April after it received an $8.6million grant from the federal government’s coronavirus stimulus package, despite boasting a $40.9billion endowment.